Published on by Aarong222 457 Comments

Next up is Serie A and once again it looks rather overpowered! 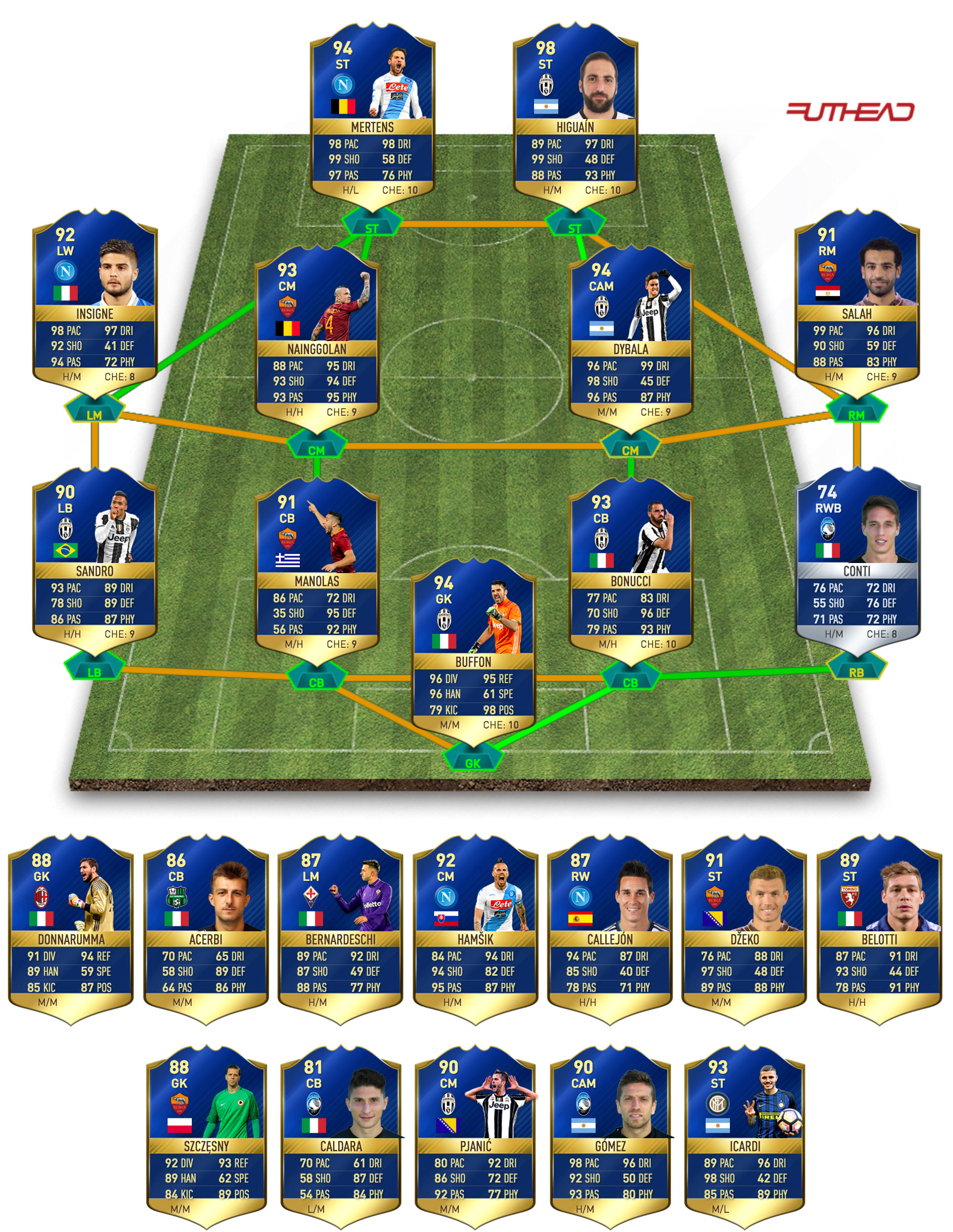 Gianluigi Buffon - GK - OVR 88 When thinking of a Serie A TOTS Buffon is often a name which springs to mind and although he has probably not been the best this season his name alone should count for a lot. When called upon he has done what has been needed and has helped Juventus to the best defensive record in the division. The veteran has been included in four of the last 5 TOTS's and is widely renown for being one of the best keepers in the world.

Alex Sandro - LB - OVR 84 For a few years, the one position which Serie A seriously struggled with in terms of FIFA was the LB. That is no longer the case thanks to Sandro who since making the move from Porto has gone from strength to strength. He has developed into one of the best LB's worldwide helping Juventus to yet another title. Offensively he has chipped in with 3 goals and two assists but it's his overall game which claims plaudits.

Kostas Manolas - CB - OVR 84 For many years Manolas has been that cheap overpowered CB which many have used but now the tables have turned and he has become one of the elite players. When he picks up his inevitable TOTS item he will instantly be one of the top five defenders on the game. He has been crucial in the defense of Roma who can boast the second best defensive record in the division conceding only 28 goals in the 33 that they have played.

Leonardo Bonucci - CB - OVR 87 Juventus's defensive has rotated a lot which for me has ruled out several options from them due to lack of games. Bonucci has featured more than most though with 24 games from a possible 34 to his name. There is a reason for this with the Italian developing into one of their main players. He has chipped in with three goals, one of which was quite special indeed. With him being a big name and part of a defense which has conceded just the 22 goals so far, I can see him getting the nod over other viable options.

Andrea Conti - RWB - OVR 71 Not the most attractive of players in terms of FUT but there is no doubt about his position in the side. He made my MC team selection and becomes the first player from the defensive side of things to make this draft as well. The Atalanta defender has excelled in his RWB position managing to score seven goals and assist another five which for a RWB is simply outstanding.

Lorenzo Insigne - LW - OVR 00 Several Napoli players have had stand out seasons in the Italian league and Insigne is one of them. The winger has an impressive 20 goal contributions to his name with 14 goals and six assists. After picking up three upgrades from his original item on FUT its fair to say that Insigne will rate along the best LW's in the game.

Radja Nainggolan - CM - OVR 85 Nainggolan has not always been known for his offensive side of the game but with 10 goals to his name it is safe to say that he has added it to his game. He rates among the best midfielders in Gazzetta's ratings and with his offensive display this season there is no doubt about him being included this year.

Paulo Dybala - CAM - OVR 86 Dybala started his Juventus career very slowly when comparing him to his Palermo form but has since became one of their most important players of the season. You only have to look at the fact he has picked up 6 special items to realise the impact he’s had. The Argentine has primarily occupied a CAM role and from there has nine goals and six assists.

Mohamed Salah - RM - OVR 82 There are so many players which failed to make the cut at Chelsea before moving abroad and turning into a top-class player. Salah is another example of that and with 13 goals and eight assists to his name this season its clear to see that he played a big part in Roma's season. 21 goal contributions in 30 games from midfield is something to admire.

Dries Mertens - ST - OVR 85 Although losing your main striker through injury is never a good thing the fact Milik picked up a long-term injury may have helped Napoli discover something special. Since Mertens has made the move from the wing to a striker role he has not looked back, picking up 22 goals and 5 assists for Napoli helping them to 3rd place finish.

Gonzalo Higuain - ST - OVR 89 Higuain is largely recognised as one of the best strikers worldwide and in Serie A without a doubt but he has been outperformed by a few this season. Despite that he has still helped lead Juventus to yet another title after he picked up 23 goals for them. I wouldn't say that he has been one of the top two strikers but due to his rating alone he makes the starting side.

Gianluigi Donnarumma - GK - OVR 78 I think there is now very little doubt about how good Donnarumma is going to be. The young Italian keeper will be following in the footsteps of Buffon in terms of what he can achieve. Arguably the best keeper in terms of performances this season in Italy after producing numerous world class displays at only the age of 18.

Francesco Acerbi - CB - OVR 81 A player which I felt was a shoe in for MC was Acerbi but for one reason or another he didn't make the final cut. He has been a rock at the back for Sassuolo though and his consistency has helped them significantly. Not only has he done well defensively but also offensively, chipping in with four of his own for the side.

Federico Bernardeschi - LM - OVR 80 In terms of being snubbed for TOTW there are not many better than Bernardeschi. He did eventually make the cut but only after being ignored on at least four occasions and was also wrongfully predicted numerous times by myself. He does deserve a spot in TOTS also after scoring 10 and assisting another two for Fiorentina in their below par season in comparison to past years.

Marek Hamsik - CM - OVR 85 Hamsik has been one of my favourite players on FIFA for several years now but this is by far the best item he will have gained. A club 80 Hamsik could be reality come the turn of Serie A and with 11 goals and four assists to his name it becomes hard to ignore him. Three IF's to his name have helped boost his stats and the likely TOTS will give him those few final stats to allow him access to the elusive 80 squad.

Jose Callejon - RW - OVR 82 Surprisingly Callejon is yet to pick up any special item this year but with both 10 goals and 10 assists to his name that could well be about to change when Serie A TOTS in announced. The Spaniard has played his part in a lethal top three for Napoli alongside both Insigne and Mertens who both also feature in the side. With a combined total of 46 goals between the three it's no wonder that they are challenging at the top of the table.

Edin Dzeko- ST - OVR 81 Described by Buffon as the best striker on current form towards the beginning of the season Dzeko has gone on to score 25 goals for Roma this season making him tied at the top alongside Belotti. Roma currently sit in second position and with Dzeko up top it's easy to see why.

Andrea Belotti - ST - OVR 80 Without a doubt the break through player this season has been Belotti. Th young Italian has impressed week after week with his performances and with him being the league’s top goal scorer with 25 goals in 29 games for a mid-table side is simply absurd. He will be signed in the summer with multiple sides inevitably chasing his signature.

Wojciech Szczesny - GK - OVR 81 It was another top season for the Polish keeper who helped Roma to their previously mentioned defensive record of only conceding 28 goals in the 33 games they have played. It's been an impressive season for the Arsenal loanee and should they require him I am sure he will do a job in the BPL once Cech has retired.

Mattia Caldara - CB - OVR 74 Conti was not the only defender chipping in with goals for Atalanta with Caldara doing the same for them as well. The young Italian also found the net on seven occasions and with seven goals for a CB standing out I believe he will be getting the nod over his central pairing in Masiello who has arguably been the better player of the two.

Alejandro Gomez - CAM - OVR 81 Another player who has impressed since making the move from winger to central position is Gomez. The Atalanta player has now picked up 14 goals and eight assists. There could be some debate over his actual position but seeing as though he has played the second half of the season in the central role that is what I am opting for.

Miralem Pjanic - CM - OVR 85 For me this was the weakest spot with several fringe players in contention and because of that I feel as though the big name will get the nod. Pjanic has not been as prolific as previous season but with five goals and six assists to his name he hasn't been quiet either. Should Pjanic be snubbed I feel as though the following are the best options: Perisic, Kessie, Bonaventura, Koulibaly or Suso.

Mauro Icardi - ST - OVR 84 The caliber of strikers this season in Italy has been unusually high with several hitting the 20+ mark. Icardi is another who falls in that category after finding the net on 24 occasions. Inter are starting to recover to the side they once were but they still have a long way to go yet.

Ciro Immobile - ST - OVR 81 Continuing the theme of a 24th player for an SBC I am once again opting for a forward. As stated previously the Italian league has seen so many strikers perform this season and Immobile is another who broke the 20-goal mark. With four IF's to his name he becomes hard to ignore but at the same time there are so many other ST's ahead of him which makes this spot perfect for him.