FIFA 23 Team of the Week 13 Prediction 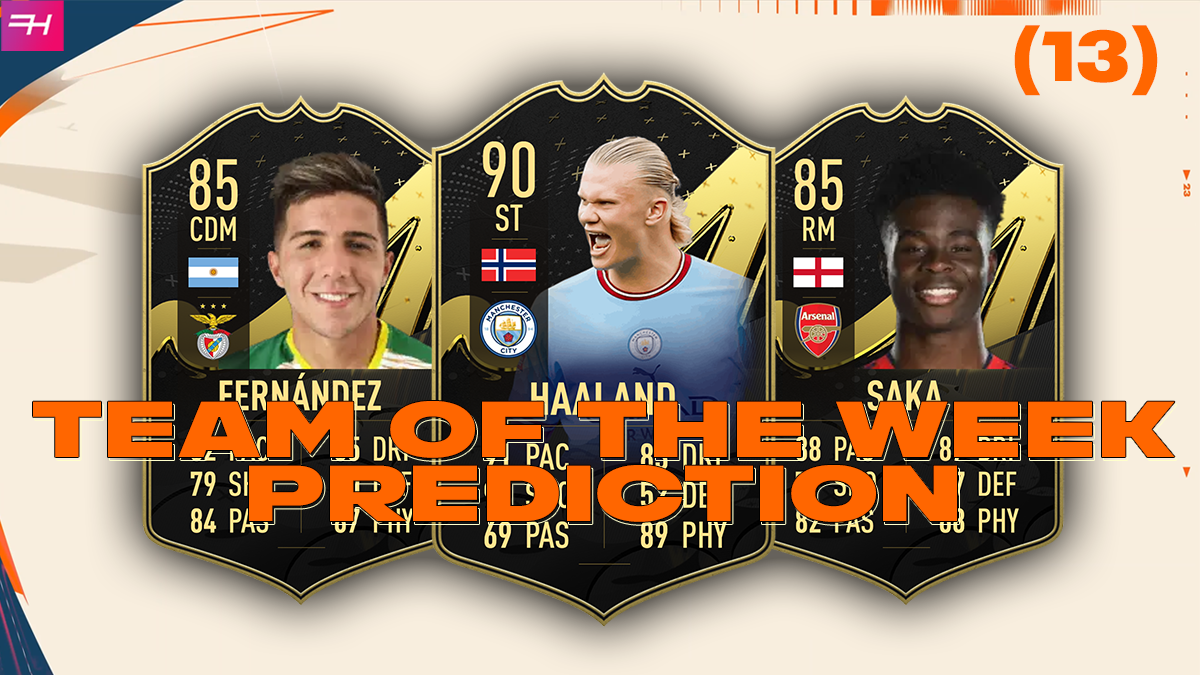 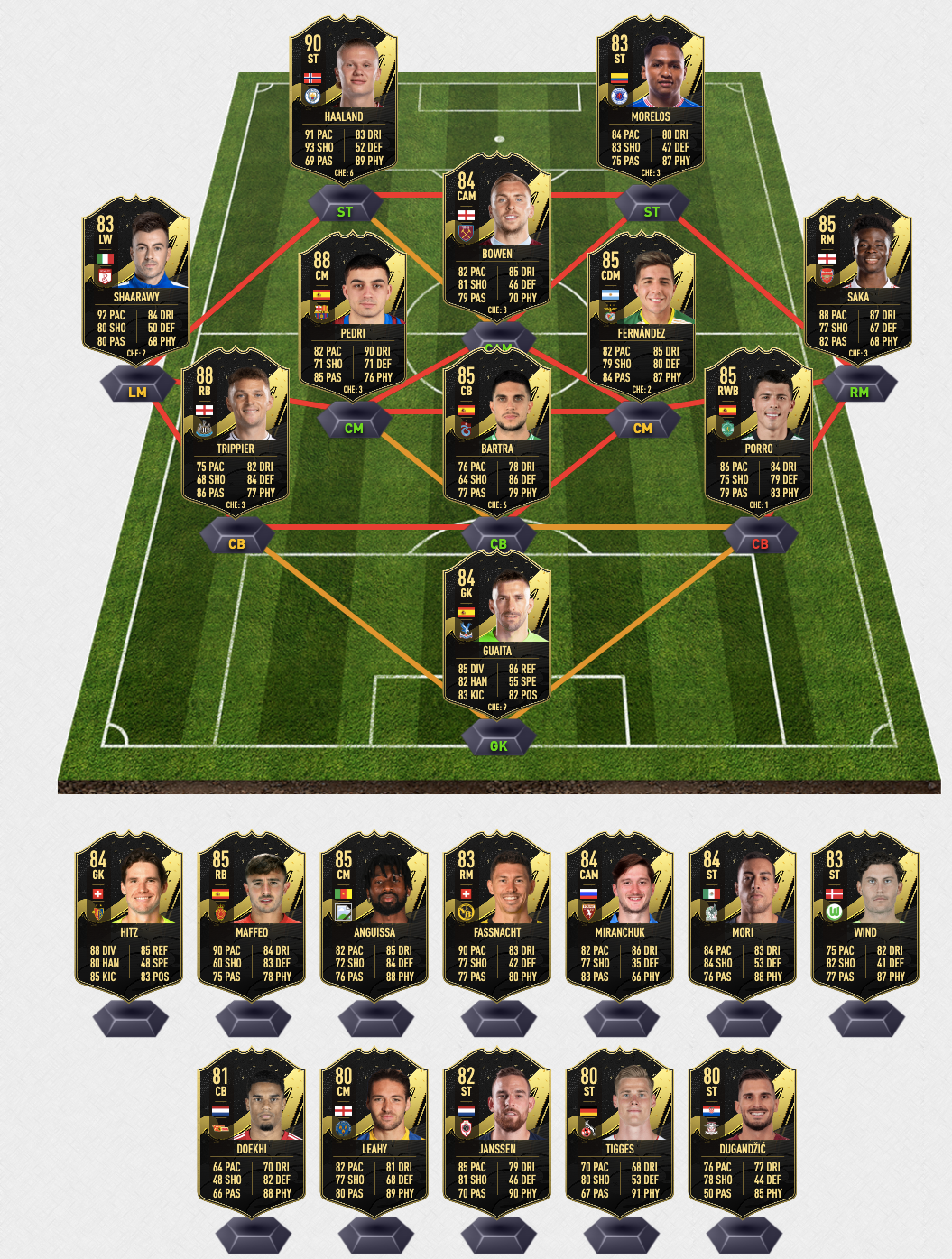 Guaita GK – Crystal Palace - 79 -> 84 Rated: Neither side could find a winner at Selhurst Park on Saturday night as Crystal Palace kept out top four chasers Newcastle to earn a point. Guaita was one of the reason Palace held out to a goalles draw, finishing the game with a total of 5 saves.

Porro RWB – Sporting CP - 81 -> 85 Rated: Sporting went back on winning ways and recorded a narrow 2-1 victory at home to Vizela. Pedro Porro, who is heavily linked with a move to Tottenham in the current transfer window, was the decisive player on the night, scoring a goal from the spot and registered an assist.

Bartra CB – Trabzonspor - 81 -> 85 Rated: Trabzonspor made it back to back wins in the Turkish Super League, picking up a comfortable 4-0 home win against Istanbulspor. Former Dortmund defender Marc Bartra was once again one of the best players defensively and also finished the game with a goal to his name.

Trippier RB – Newcastle Utd - 86 -> 88 Rated: Neither side could find a winner at Selhurst Park on Saturday night as Crystal Palace kept out top four chasers Newcastle to earn a point. Depsite just drawing the game, Trippier was outstanding once again, especially in attack. Finished the game with 16 crosses and picked up MOTM.

Enzo Fernandez CDM – SL Benfica - 82 -> 85 Rated: There were a lot of rumours and transfer speculations around Enzo Fernandez after his incredible World Cup for Argentina but it looks like he'll stay at Benfica for the rest of the season which could be the best for Benfica in their ambitions of chasing the league title. The Argentine was once again heavily involved in Benfica's 3-0 over Santa Clara with two assist and picking up MOTM.

Pedri CM – Barcelona - 86 -> 88 Rated: Barcelona did enough to ensure they would finish another weekend top of La Liga with a narrow 1-0 win over Getafe at Camp Nou. A major creative outlet for Xavi’s system again, playing as an advanced “8” while making offensive runs. Scored a sublime goal but realistically he may miss out as it wasn't his best performance in a Barcelona shirt and is just in due to the lack of options.

Bowen CAM – West Ham - 80 -> 84 Rated: West Ham ended their seven-match winless run in the Premier League with a pivotal 2-0 win over Everton. Bowen, who was a shadow of himself so far this season, stepped up big and scored both of the goals for his side.

B. Saka RW – Arsenal - 82 -> 85 Rated: A late goal from Eddie Nketiah gave Arsenal three points that took them a step closer to the Premier League title in a thriller with Manchester United. Saka got one excellent goal, so nearly got another, and was a handful for Man Utd all game. Nketiah is also an option but with Saka being gold he's the more likely player to get the inform.

Shaarawy ST – Roma FC - 86 -> 88 Rated: Roma recorded another solid victory in their 2022/23 Serie A campaign with a 2-0 away at Spezia and made sure they cemented the fourth spot in the standings. Dybala was the standout but with him currently being in TOTW I'm instead picking El Shaarawy who scored once and picked up a 7 match rating.

Haaland ST – Man City - 89 -> 90 Rated: Manchester City actually had two games counting towards TOTW this week, with one of them being their 3-0 win at home to Wolverhampton. Erling Haaland continued to score, this time he netted three times with one from the spot.

Morelos ST – Rangers - 76 -> 83 Rated: Michael Beale extended his unbeaten record as Rangers boss after a comeback win over Kilmarnock. Big role to play with Kemar Roofe and Antonio Colak sidelined. Grabbed an important leveller and set up Kent goal before heading home his second of the night. Denied hat-trick by brilliant low save.

Hitz GK – FC Basel - 78 -> 84 Rated: It's not often I'm pretty sure about a goalkeeper but with Hitz I am. Basel played out a 1-1 draw against St. Gallen on the weekend and Hitz, who joined from Borussia Dortmund, finished the game with a total of 9 saves. Important to mention is that Basel was down to 10 men for nearly the full second half of the game and the most important save came a few minutes before the final whistle when Hitz saved a penalty and made sure Basel went home with a point.

Maffeo RB – RCD Mallorca - 82 -> 85 Rated: La Liga again offers not much in terms of potential informs which makes it harder to pick. One who could be in is Mallorca's fullback Pablo Maffeo who assist the only goal in their 1-0 win against Celta Vigo.

Anguissa CM – Napoli FC - 81 -> 85 Rated: Napoli remains the top side in Italy this season after they picked up another three points with a comfortable 2-0 against Salernitana. Zambo Anguissa was one of the decisive players for Napoli, assisting one of the two goals and picked up a solid 7 match rating.

Fassnacht RM– BSC Young Boys - 76 -> 83 Rated: I was really struggling to pick a gold midfielder simply because there are not standouts and thus this is another punt. Young Boys recorded a narrow 2-1 win away at Grasshoppers and Fassnacht scored one of the goals for his side.

Miranchuk CAM – Torino - 78 -> 84 Rated: Serie A is hard to predict this week with no clear standouts apart from Lookman and Dybala who both are in the current team. One who should make it this week is Miranchuk who scored the only goal in Torino's 1-0 victory against Fiorentina.

R. Fuenes Mori ST – CF Monterrey - 79 -> 84 Rated: I'm not totally convinced by this pick because Mori only has a World Cup item in FUT right now but I'm taking the gamble on it after he scored all three goals in Monterrey's 3-1 win against San Luis.

Wind ST – VfL Wolfsburg - 76 -> 83 Rated: There have been a lot of goals on the first matchday on the return of the Bundesliga the past weekend, one of them came from Wolfsburg where the hosts blew away Freiburg with a stunning 6-0. There are a couple of inform options from this game, one of them is Jonas Wind who hit a brace and was involved in nearly everything in Wolfsburgs attack.

Doekhi CB – Union Berlin - 74 -> 81 Rated: Union Berlin completed a dramatic come-from-behind win against Hoffenheim, picking up all three points with a 3-1 home win. It's rare that defenders score twice but Doekhi exactly did that, he scored the equaliser 15 minutes before the final whistle before he went on and put Berlin in front right before the end of the game.

Leahy CM – Shrewsbury - 67 -> 80 Rated: Forwards from the lower english divisons haven't picked up their form yet in the new year but midfielders are actually providing goals and assist on a regular basis. Leahy did exactly that as he scored twice, with one from the spot, and also assisted another two in Shrewsbury's 5-1 win against Cambridge U.

Janssen ST – Royal Antwerp - 72 -> 82 Rated: Janssen could pick up an inform this week after he scored twice in Antwerps 4-1 victory against Standard Liege.

Tigges ST – 1. FC Köln - 68 -> 80 Rated: A stunning Cologne revelled amid a carnival atmosphere as Steffen Baumgart's side scored seven times to leave Werder Bremen battered and bruised on the teams' return to Bundesliga action. Tigges, who joined Cologne from Dortmund, could pick up the inform this week after he scored twice and assisted another for his side.

Dugandzic ST – FC Rapid Bucuresti - 68 -> 80 Rated: Dugandzic should be secured an inform this week after he scored all three goals in Rapid Bucuresti's 3-0 win against Sepsi OSK.