FIFA 23 Team of the Week 12 Prediction

Published on by FutheadNewsStaff 1 Comments 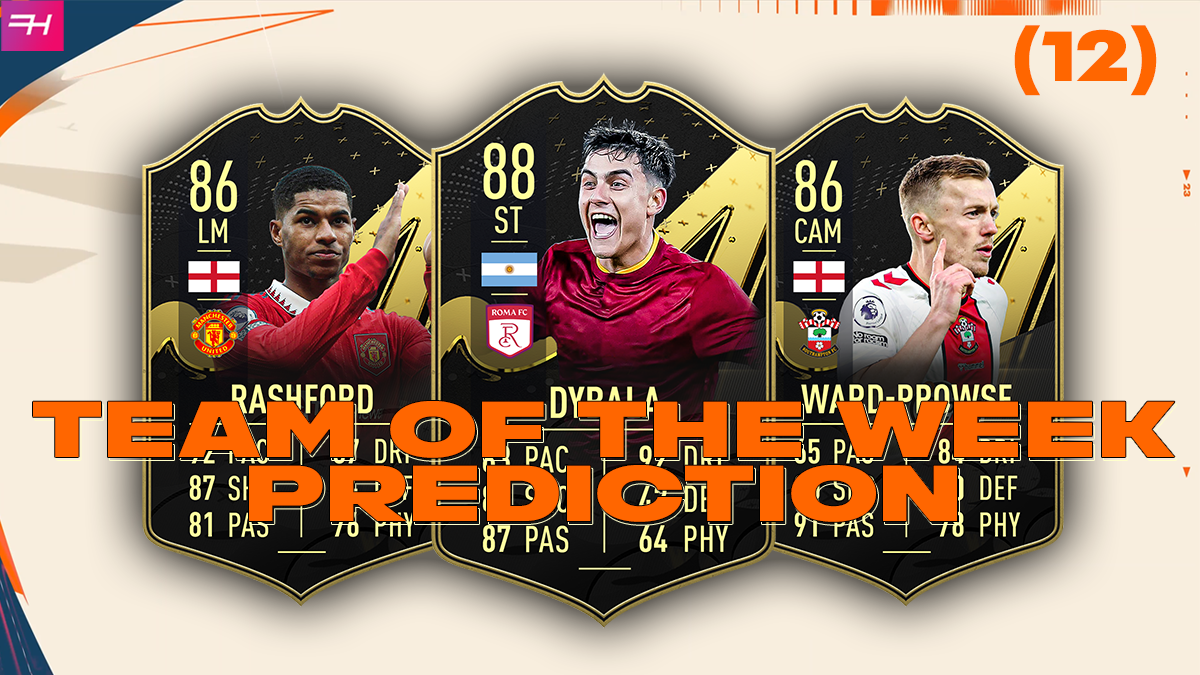 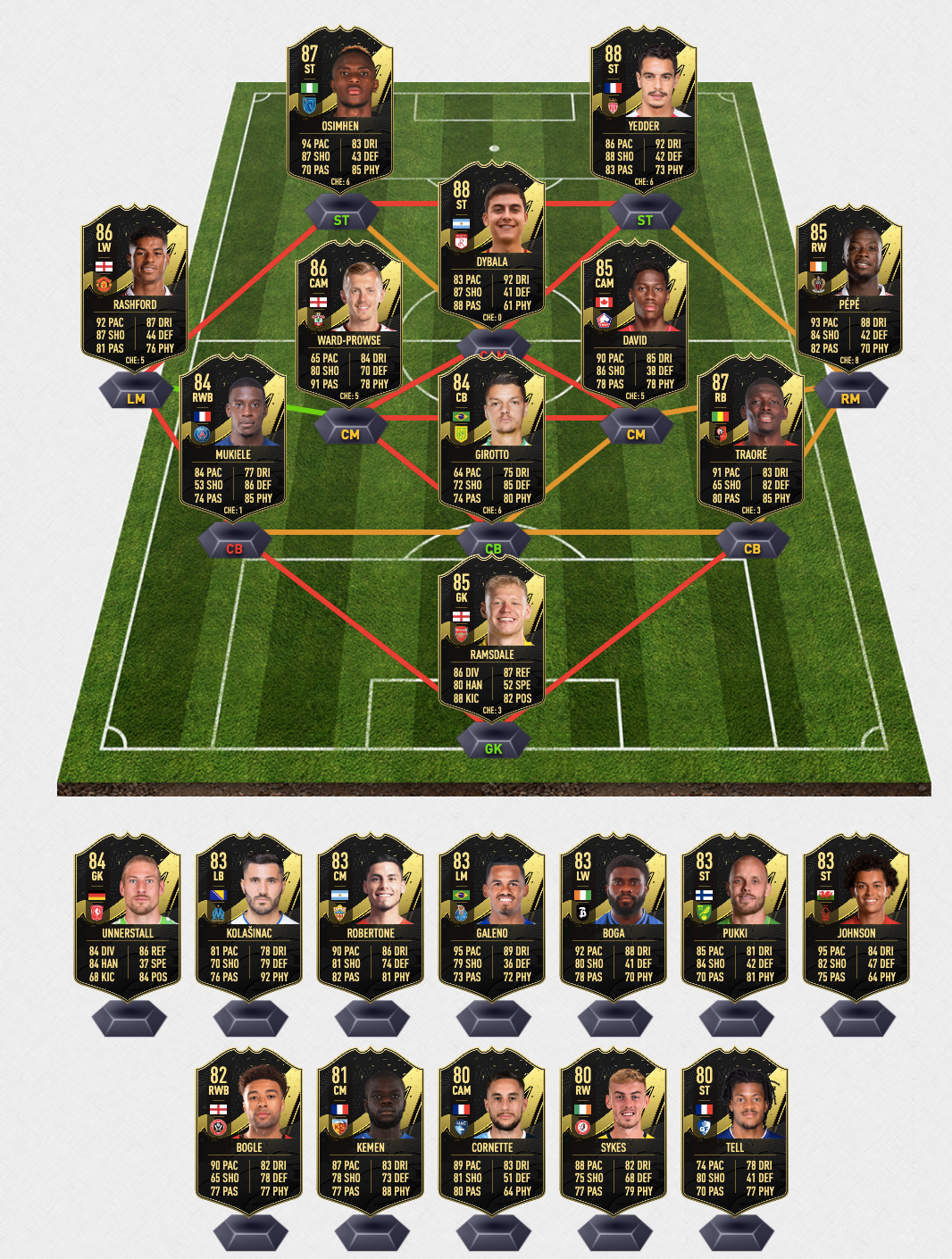 Ramsdale GK – Arsenal - 82 -> 85 Rated: Arsenal extended their lead at the top of the Premier League to eight points as they won 2-0 at Tottenham Hotspur on Sunday evening. Ramsdale was superb at the start of the second half when Arsenal came under pressure and quick off his line. Two smart saves in the first period when his side were on top too. A really focused display.

Mukiele RWB – Paris SG - 79 -> 84 Rated: Lionel Messi made it a winning return to Paris as the World Cup hero helped the Ligue 1 leaders bounced back from last week’s defeat to Lens by inflicting a tenth consecutive defeat on bottom boys Angers. The inform though could go to former Leipzig defeder Nordi Mukiele who assisted both of the goals from the RWB position.

Girotto CB – Nantes - 78 -> 84 Rated: Ligue 1 often is a reliable source for gold defenders and that seems to be the case this week once again. Nantes picked up all three points with a 3-0 win away at Montpellier and Brazil defender Andrei Girotto scored one of the goals for his side.

Traore RWB – Stade Rennais FC - 85 -> 87 Rated: Paris Saint-Germain suffered a shock defeat to Rennes at Roazhon Park on Sunday evening. The defeat cuts PSG's lead at the top of Ligue 1 to three points thanks to Lens 1-0 win over Auxerre on Saturday. The winning goal came from defender Traore who played on the RWB position and his second inform isn’t looking bad!

J. David CAM – LOSC Lille - 82 -> 85 Rated: Lille bounced back from a little midweek disappointment where they played out a goalless draw against Brest, recording a comfortable 5-1 win at home to Troyes. Canadian international David once again proved he’s one of the best strikers in the league, finishing the game with two goals.

Pepe RM – OGC Nice - 82 -> 85 Rated: OGC Nice bouned back from a three-game winless run in the league and a damaging defeat to amateur opponents in the Coupe de France with their new headcoach Digard and recorded a thumping 6-1 win midweek at home to Montpellier. Nicolas Pepe scored twice and picked up an 8 match rating from L'equipe and could be in this week.

Rashford LM – Manchester Utd - 81 -> 85 Rated: Manchester United came from behind to secure a stunning 2-1 win over cross-town rivals Manchester City in the Premier League on Saturday, January 14. The result sees the Red Devils climb to third place, just one point behind City. Rashford scored of the two goals and was heavily involved in the other one as it was quite controversial but him being MOTM makes him a strong candidate.

Ward-Prowse CAM – Southampton - 81 -> 86 Rated: Southampton took a huge step towards Premier League survival on Saturday with a 2-1 comeback victory over Everton at Goodison Park. Playing as an advanced number ten and even as a second striker at times. Had a shot on the stroke of half-time that Pickford had to tip onto the post. Got another chance at the start of the second half and made no mistake, scoring his 50th goal for the club in the process. Scored the winner not long after with an incredible free-kick.

Dybala ST – Roma FC - 86 -> 88 Rated: Serie A provides a ton of attacking options this week and I expect some of them to miss out on an inform. Paulo Dybala is one of the contenders this week after he scored both goals in Roma’s comfortable 2-0 win at home against Fiorentina.

Ben Yedder ST – AS Monaco - 86 -> 88 Rated: Team of the Year is just around a corner and we all love a Mbappé TOTY troll right? Ben Yedder will be exactly this, the Frenchman scored a hat-trick in Monaco’s trashing 7-1 victory against Ajaccio and there’s no doubt he’ll be featured in the side this week.

Osimhen ST – Napoli - 85 -> 87 Rated: Napoli blew Juventus away with a sensational performance on Friday evening, putting five goals past a Juventus side who recorded eight clean sheets in a row and just conceded 7 goals the whole season before the game. A supreme performance from the Nigerian bomber who showcased why he’s widely acclaimed as the most dangerous striker in Serie A. Pounced on the rebound to break the deadlock, before picking up Kvaratskhelia for the second. Nodded home his team’s fourth to complete a well-deserved personal brace.

Unnerstall GK – FC Twente - 78 -> 84 Rated: Ajax Amsterdam is struggling a bit this season and that continued when they played out a goalless draw at home to Twente on Saturday. Twente though continued their impressive run in the league and kept another clean sheet, thanks to Lars Unnerstall and hos 5 saves he made.

Kolasinac LWB – OM - 75 -> 83 Rated: Ligue 1 had two matchdays for TOTW the past week so we can expect a bit more players from there featured, another one could be Kolasinac who scored in Marseille win on the weekend and picked up an 8 match rating.

Robertone CM – Almeria - 76 -> 83 Rated: La Liga provided very little in terms of inform options so I'm going to take the punt on Robertone who scored the equaliser to make sure Almeria secured a point against Atletico Madrid.

Galeno LM– FC Porto - 77 -> 83 Rated: The game to watch the past weekend in Liga NOS was the clash between Benfica and Sporting but the game most likely won’t produce an inform as it ended in a 2-2 draw. One game who should provide an inform is Porto’s 4-1 victory over Famalicao in which Galeno scored twice and also registered an assist.

Boga LW – Bergamo Calcio - 77 -> 83 Rated: Atalanta Bergamo ran riot on Sunday and recorded a trashing 8-2 victory at home to Salernitana, becoming the first team to score eight goals in a single Serie A game since Inter Milan in 1996. Jeremy Boga was one of the goalscorers this evening, scoring the early lead and also registered an assist.

Johnson ST – Nott'm Forest - 75 -> 83 Rated: Nottingham Forest recorded a 2-0 victory over East Midlands rivals Leicester City on Saturday. Gibbs-White claimed MOTM for his two assists but I'm instead going with Brennan Johnson who scored both goals for his side.

Pukki ST – Norwich - 75 -> 83 Rated: Norwich City charged to a 4-0 victory over Preston North End in David Wagner's first Championship game at the helm. Teemu Pukki, a familiar name in Fifa, got himself two goals and also registered an assist and should be included this week.

Kemen CM – Kayserispor - 70 -> 81 Rated: Kayserispor picked up much needed three points with a 4-1 victory at home to Sivasspor and Kemen scored twice and assisted another for his side.

Bogle RWB – Sheffield Utd - 73 -> 82 Rated: Two goals from Bogle from the RWB position in Sheffield United's 3-1 win against Stoke could be enough for him to be included this week.

Cornette CAM – Havre AC - 66 -> 80 Rated: The only hat-trick this week came from the second French divison where Cornette scored all three goals in Le Havre's 3-1 win against Nimes.

Sykes RW – Bristol City - 66 -> 80 Rated: Sykes could pick up an inform on Wednesday after he scored twice in Bristol City's 4-2 win against Birmingham on the weekend.

Tell ST – Grenoble Foot 38 - 66 -> 80 Rated: There haven't been as much hat-tricks as usuals from silvers so there's more room for others and of them could be Jordan Tell who scored twice in Grenoble's 4-2 win against Guingamp.