FIFA 23 Team of the Week 11 Prediction

Published on by FutheadNewsStaff 1 Comments 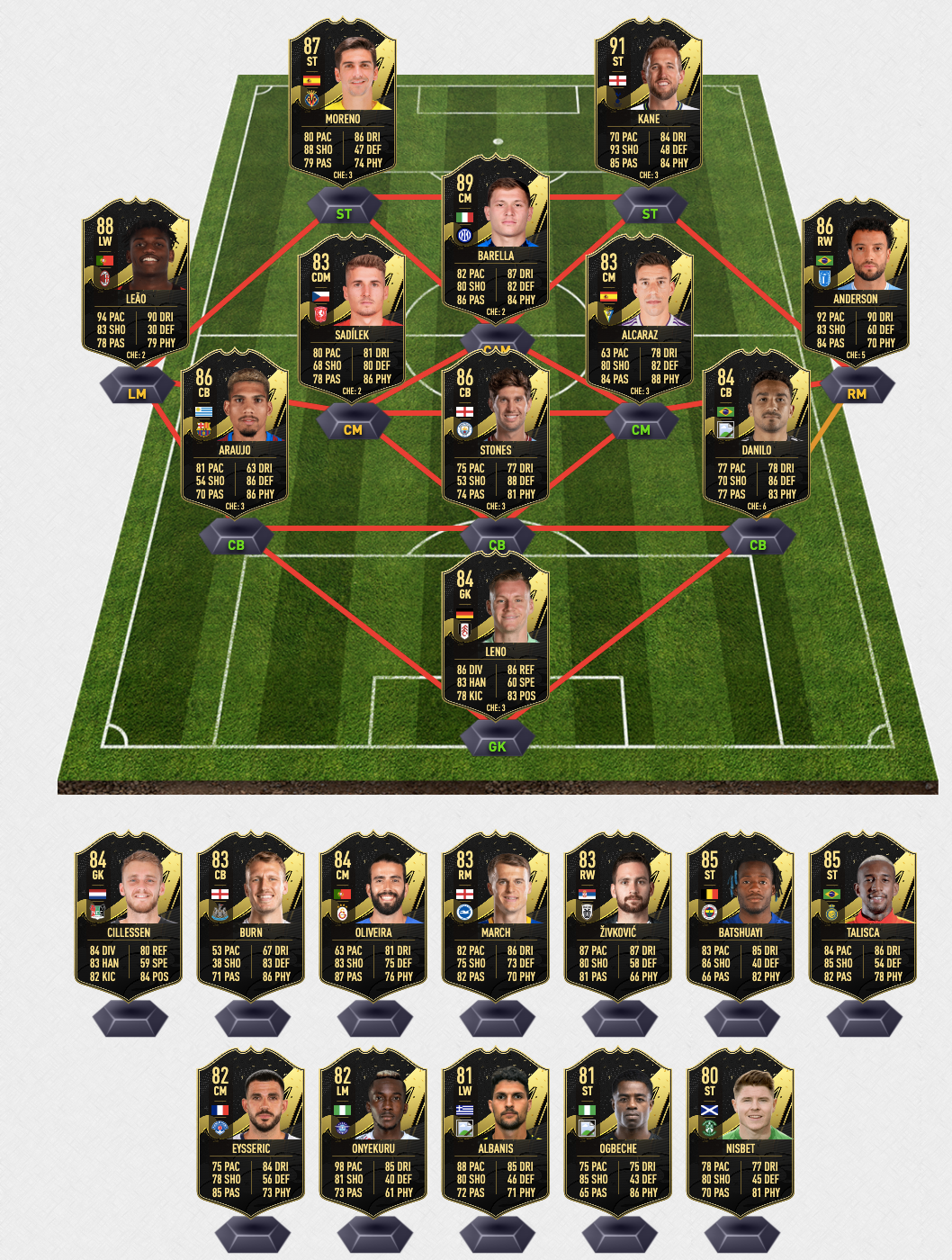 Leno GK – Fulham - 80 -> 84 Rated: Fulham recorded another victory midweek, picking up all three points in a narrow 1-0 against Leicester City. While Fulham had the better of the first half, Leno was still called upon occasionally, most notably as Harvey Barnes ran through on goal and failed to lob the German on the edge of the area. The second half however, was incredibly impressive, with our colossal keeper making a number of world class saves to keep Fulham ahead. This was undoubtedly Leno’s best performance to date in a Fulham shirt.

Stones CB – Manchester City - 83 -> 86 Rated: Manchester City closed the gap on Premier League leaders Arsenal by winning a tightly fought contest with Chelsea 1-0 at Stamford Bridge on Thursday night thanks to Riyad Mahrez's strike. Stones was a defensive monster for Man City, making a few last-ditch tackles and positioning himself brilliantly to shut down Chelsea attacks. Composed on the ball as always.

Danilo CB – Juventus - 80 -> 84 Rated: Juventus’ resurgence continued at the Allianz Stadium as they extended their recent winning run in Serie A to eight matches after beating Udinese 1-0. Danilo was the matchwinner on the night, poking home from close range to give his side all three points but it was his overall performance which was impressive. The Juventus captain stood firm in defence when Udinese were going forward with frequency in the first half. He made five clearances, two tackles, blocked one shot, made one interception and won three of his four aerial duels.

Araujo CB – FC Barcelona - 83 -> 86 Rated: Barcelona went three points clear at the top of La Liga after a hard-fought 1-0 win at Atletico Madrid. A bit sloppy and often a bit slow to react - Araujo had a game to forget initial quarter but as one would expect, he was among the best players later on. He made an insane backheel goal-line clearance to deny Griezmann in the 93rd minute.

Alcaraz CM – Cadiz FC - 76 -> 83 Rated: Spanish side Cadiz CF recorded another important victory in their fight against relegation this season, this time beating Valencia away with 1-0. The golden goal came from midfielder Alcaraz who could sneak in.

Sadilek CDM – FC Twente - 75 -> 83 Rated: Dutch side Twente maintained the best home side in the league, having only conceded twice in 8 games, after they recorded a comfortable 2-0 win against relegation-battling FC Emmen. One of the goals came from their defensive midfielder Sadilek who also was vital in the middle of the park and helped shutting down a number of attacks from their opponents.

Barella CM – Inter - 87 -> 89 Rated: Inter become the fist team in the 2022/2023 Serie A season to beat Napoli after the best domestic league performance of the season. A simply fabulous display from the Euro 2020 winner who seems to be continuously improving his game. Displayed some breathtaking skills and neat touches, all while never neglecting his defensive duties.

Leao LW – Milan - 86 -> 88 Rated: AC Milan clinched all three points against Salernitana and thus started the new year in the best way possible. Tonali was the oustanding player for Milan in this victory but with him recently being included in Winter Wildcards and due to the lack of wingers I decided to go with Leao who scored one against Salernitana and also assisted one in Milan's disappointing late draw against Roma.

F. Anderson RW – Latium - 79 -> 86 Rated: Wingers are far from easy to select this week with basically no real standout performers so this is a bit of a punt. Lazio Roma again recorded a disappointing result after their midweek loss to Lecce, this time playing out a 2-2 draw after leading by 2-0. Felipe Anderson was among the goalscorers and picked up a 7 match rating from Gazzetta.

Moreno ST – Villareal CF - 85 -> 87 Rated: Some shambolic defending from Real Madrid saw them miss the chance to climb up to first in La Liga as they fell to a chaotic 2-1 defeat to Villarreal on Saturday. The Man of the Match. Gerardo Moreno provided yet another example of why he is one of the best players in LaLiga, recording an assist and cooly scoring from the spot to give Villarreal the lead. Moreno created chances throughout the match, always looking to set up teammates while making the right decisions in the final third.

Kane ST – Spurs - 89 -> 91 Rated: Tottenham overcame a sluggish and disappointing first half performance to surge to an ultimately clinical 4-0 win over Crystal Palace at Selhurst Park in the Premier League on Wednesday night. Anonymous for large periods of the first half. But he was starved of service and came alive when he finally got it. Showcased clinical quality with two great goals, made the third goal possible and then directly assisted the fourth.

Cillessen GK – NEC Nijmegen - 80 -> 84 Rated: There have been quiet a few gold goalkeepers with really good performances this week so there could be anyone selected but I'm opting for NEC's shot-stopper Cillessen after he made a total of 6 saves and was named MOTM in his side's 1-1 draw against Ajax.

Botman CB – Newcastle - 77 -> 83 Rated: Arsenals perfect home record this season came to an end against the meanest defence in the Premier League as Newcastle held out for a 0-0 draw. Sven Botman maintained his unbeaten start in a Newcastle shirt. He was cool in possession after spraying a couple passes out wide, was solid defensively and made clearance after clearance.

S. Oliveira CDM – Galatasaray - 79 -> 84 Rated: One of the biggest games in European club football took place on Sunday between Fenerbahce and Galatasaray, with the better outcome for the visitors who took all three points with a comfortable 3-0 win. These games often produces an inform and Oliveira could be in this week after he scored one from the CDM position.

March RM– Brighton - 75 -> 83 Rated: De Zerbi's Brighton thumped a sorry Everton side 4-0 at Goodison Park on Tuesday night. Early on March skinned Vitalli Mykolenko on the right and put in a lovely cross for Kaoru Mitoma, which the Japanese international failed to convert. He repeatedly bamboozled the Ukrainian and took his goal really well. Another excellent display.

Zivkovic RW – PAOK - 77 -> 83 Rated: I mentioned it before, gold wingers or wingers in general are hard to find this week so I'm going a bit of a risky route here. Zivkovic scored one of his side's 3-0 win away at PAS Lamia.

Batshuayi ST – Fenerbahce - 81 -> 85 Rated: You might ask why Batshuayi is in here after Fenerbahce lost to Galatasaray but his inclusion is for his midweek performance where he scored twice (one from the spot) in Fenerbahce's narrow 2-1 win against Antalyaspor.

Talisca ST – Al Nassr - 82 -> 85 Rated: Another player who could pick up the inform this week is Cristiano Ronaldo's new team mate Anderson Talisca who scored both goals in Al Nassr's 2-0 victory against Al Tai.

Eysseric CM – Kasimpasa - 73 -> 82 Rated: There are a couple of potential players for an inform from the Turkish league this week and one of them is Kasimpasa's Eysseric after he scored one and assisted in his side's 4-1 win against Alanyaspor.

Onyekuru LM – Adana Demirspor - 73 -> 82 Rated: Another player from the Turkish league we might see this week due to the lack of leagues and the new upgrade system is Henry Onyekuru who finally found the net again, this time twice, as Adana Demirspor recorded a thumping 6-0 win against bottom side Istanbulspor.

Albanis LW – FC Andorra - 70 -> 81 Rated: FC Andorra went back on winning ways in La Liga 2 after two draws, beating Real Oviedo 3-1 at home. Greek forward Albanis was his side's Man of the Match after he scored twice and could find his way into the side this week.

Nisbet ST – Hibernian - 69 -> 80 Rated: Scottish side Hibernian went back on winning ways after two defeats in a row, recording a 3-2 victory away at Motherwell. Nisbet, who's back from injury, scored all three goals for his side and should be a no brainer this week.

Ogbeche ST – Hyerabad - 70 -> 81 Rated: Another hat-trick this week came from India in the name of Ogbeche who scored all three goals in Hyderabad's 3-1 victory over Goa.