FIFA 23 Team of the Week 9 Prediction

Published on by FutheadNewsStaff 3 Comments 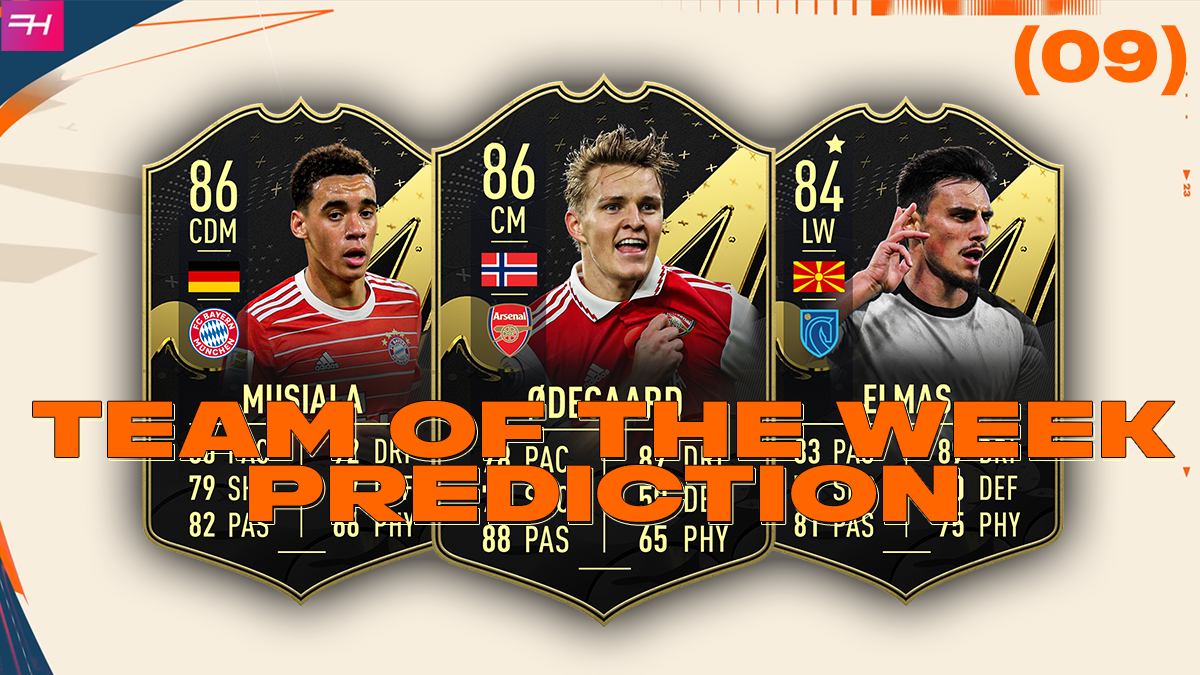 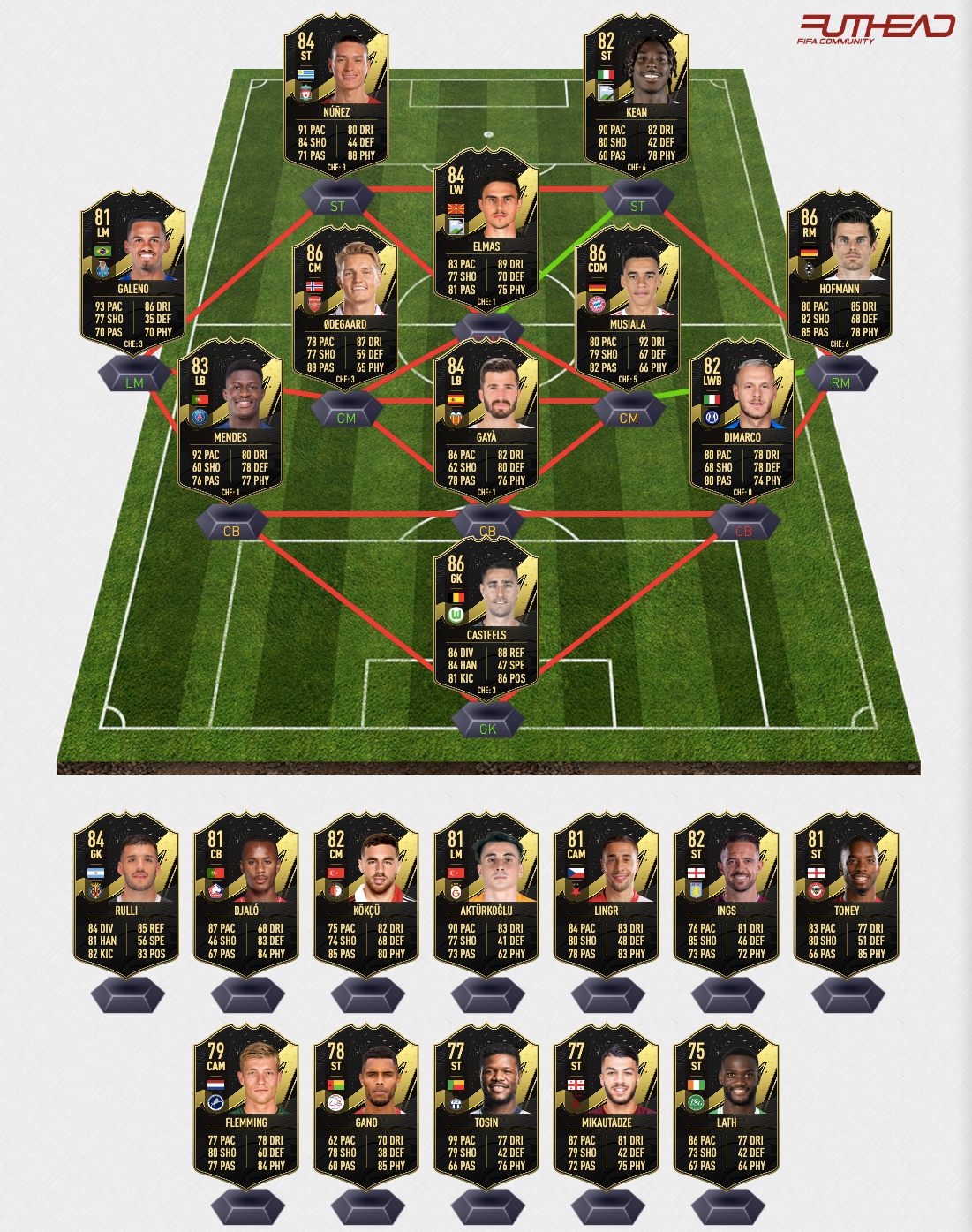 Casteels GK – VfL Wolfsburg - 84 -> 86 Rated: VfL Wolfsburg put more misery on Borussia Dortmund midweek as they took all three points at home with a overall deserved 2-0 victory thanks to goals from van de Ven and Lukas Nmecha. Koen Casteels tho was the standout between the sticks, making a total of six saves to deny Dortmund a goal and seal all threee points for his side.

N. Mendes LB – Paris SG - 80 -> 83 Rated: Paris SG extended their winning run in the French top-flight, recording another victory beating Auxerre with 5-0. Nuno Mendes was named MOTM after his two assist and the clean sheet and could pick up the inform this week.

Gaya LB – Valencia CF - 82 -> 84 Rated: Valencia went back on winning ways in their final La Liga game before the World Cup break, beating Real Betis comfortbaly with 3-0. Jose Gaya could pick up his first inform this week after the Spaniard assisted one of the goals and kept a clean sheet.

Dimarco LWB – Inter - 78 -> 82 Rated: A ruthless Inter Milan hit Bologna for six in a 6-1 win midweek in what was a thoroughly professional and efficient performance, scoring six goals from just seven shots on target. Italy International Dimarco got on the scoresheet twice and picked up an 8 match rating and MOTM.

Odegaard CM – Arsenal - 84 -> 86 Rated: Arsenal secured a comfortable 2-0 win over Wolverhampton Wanderers in the Premier League on Saturday and extended their lead on top of the table to now five points. Martin Odegaard scored twice for Arsenal, with his second superbly well-taken.

J. Musiala CDM – FC Bayern - 84 -> 86 Rated: In-form Serge Gnabry and Choupo-Moting supplied the goals as Bayern Munich made it ten wins in a row in all competitions, downing Schalke 2-0 in Gelsenkirchen. Youngster Jamal Musiala once again was one of the best performers for the Bavarians, assisting both goals from the CDM position and could pick up his second inform.

J. Hofmann RM – M'gladbach - 84 -> 86 Rated: Borussia Mönchengladbach took all three points in their clash against the other Borussia from Dortmund, scoring four times to beat their opponents with 4-2. German International Jonas Hofmann found his form right before heading to Qatar as he scored one of the goals and assisted anothet two.

Galeno LM – Porto - 77 -> 81 Rated: FC Porto kept pace with league leader Benfica and made sure they won't lose more ground in the title race, beating Boavista Porto with 4-1 on Saturday. Galeno scored twice for Porto and could be included in this week's TOTW.

Elmas LW – Napoli FC - 78 -> 86 Rated: Nigeria international Victor Osimhen continued with his exploits on Saturday after getting his ninth Serie A goal as Napoli beat Udinese 3-2 on Saturday. Macedonian international Eljif Elmas tho was once again the driving force behind Napoli's victory, replacing Kvaratskhelia once again on the left flank and scored and assisted another.

Nunez LW – Liverpool - 82 -> 84 Rated: Liverpool signed off with a 3-1 win at home to Southampton in their final Premier League match ahead of the upcoming World Cup on Saturday afternoon. Darwin Nunez looked sharp and looked eager to make an impact on the game. He did that just 21 minutes into the contest, scoring with a lovely first-time finish. He added another with a smart slide to make it 3-1 just before the break.

M. Kean ST – Juventus - 78 -> 82 Rated: Juventus Turin recorded their sixth consecutive Serie A victory, finishing the calendar year third in the standings thanks to a overall deserved 3-0 win against Lazio. Moise Kean picked up MOTM after he scored twice and should have a good chance to make it this week with the lack of higher rated gold strikers.

G. Rulli GK – Villareal CF - 82 -> 84 Rated: Villareal picked up important three points in their last match before heading into the World Cup break, beating Espanyol Barcelona 1-0 due to an own goal from opponent keeper Lecomte. His pendant on the other side, Geronimo Rulli, kept his side in the game before with some important saves and finished the game with 6 saves overall.

Djalo CB – Lille - 75 -> 81 Rated: Lille recorded a narrow 1-0 victory against SCO Angers the past weekend and the golden goal came from Portuguese youngster Djalo who also helped to keep the clean sheet after his side was down to ten man for the remaining 15 minutes of the game.

Kökcü CDM – Feyenoord - 79 -> 82 Rated: Kökcü was one of the Eredivisie players last Fifa who got a lot of specials cards and his first could be on the way this week after the midfielder scored twice in Feyenoord's 5-1 win against Excelsior.

Lingr CAM– Slavia Praha - 75 -> 81 Rated: Another Slavia Praha Inform could be on it's way this week after Olayinka was included two weeks ago, this time it's his midfield partner Lingr who scored twice and assisted another in Slavia's 4-0 win over FC Trinity.

Aktürkoglu LM – Galatasaray - 75 -> 81 Rated: Galatasaray Istanbul recorded their third consecutive League win, trashing Istanbul Basaksehir with 7-0. Aktürkoglu will definetly pick up the inform this week after he scored three of the goals for his side.

Danny Ings ST – Aston Villa - 79 -> 82 Rated: Strikers have been very hard to choose this week with no real standouts, especially higher rated golds. Danny Ings tho could be one of the favourites to make it after he scored twice in Aston Villa's 2-1 vs Brighton.

Toney ST – Brentford - 77 -> 81 Rated: Manchester City fell to their first home defeat of the season as Brentford took all three points with a 98th-minute winner on Saturday lunchtime. Brentford's attacker Ivan Toney was the outstanding and decisive player in that game, scoring both of the goals and was a constant threat for Man City's defenders.

Flemming CAM – Millwall - 73 -> 79 Rated: Milwall went back on winning ways in the Championship after two draws in a row, picking up all three points with a 4-2 victory away at Preston North End. Zian Flemming scored three times for his side and should be included this week.

Zinho Gano ST – Zulte Waregem - 71 -> 78 Rated: We've seen an insane amount of high scorlines the past weekend and one of the came from the 1A Pro League where Zulte Waregem and KAS Eupen shared points in a spectacular 5-5 draw. Zinho Gano was one of the standouts, scoring twice and assisting another two.

Tosin ST – FC Zürich - 69 -> 77 Rated: Another player who scored three times the past weekend and who should be included is Zürich's Tosin. The Benin forward scored three of his side's four goals in their victory against Servette FC.

Latte Lath ST – FC St. Gallen - 65 -> 75 Rated: There have been a few hat-tricks the past weekend and one also was scored in St. Gallen's 7-2 win against Sion and Latte Lath could be the one to pick up the inform after he scored three of the goals.

Mikautadze ST – FC Metz - 69 -> 77 Rated: Another player with a hat-trick the past week who makes himself a strong contender for TOTW this week is Mikautadze who scored three of his side's goals in their 4-1 victory over Paris.