FIFA 23 Team of the Week 7 Prediction

Published on by FutheadNewsStaff 2 Comments 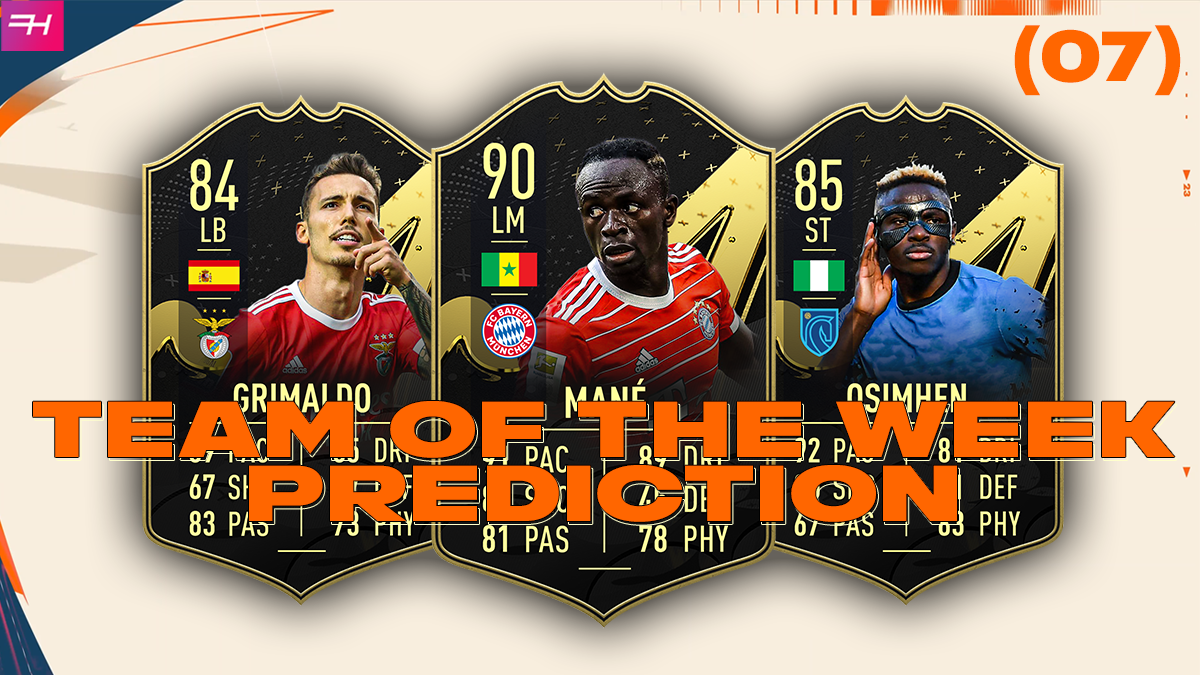 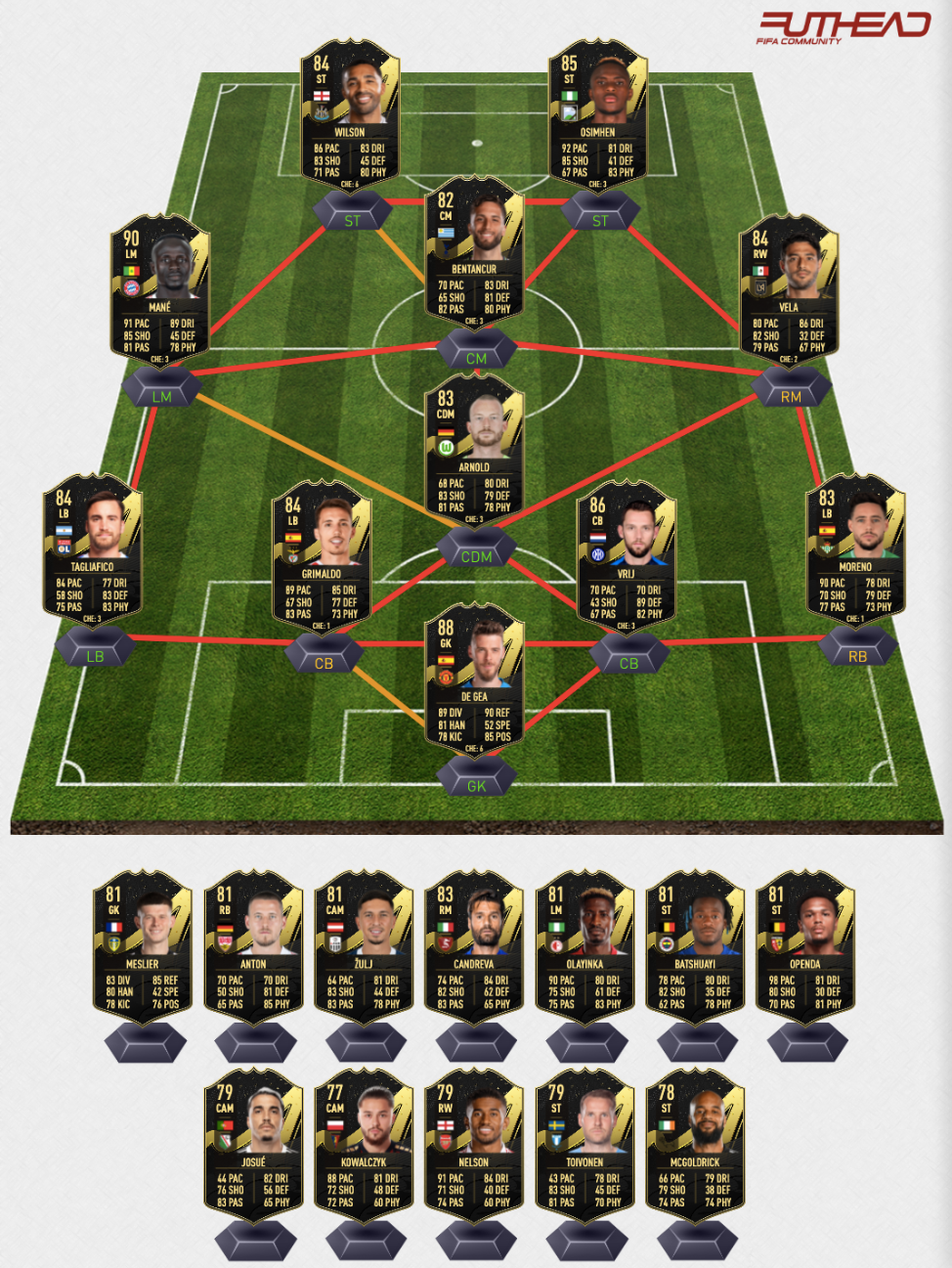 De Gea GK – Manchester Utd - 87 -> 88 Rated: Marcus Rashford's 100th goal was enough to send Manchester United to fifth position as they managed to hold on against West Ham United at Old Trafford. It was a monumetal performance from the United custodian. The Spaniard pulled off two massive saves from Kurt Zouma and Declan Rice and kept the tempo ticking.

N. Tagliafico LB – Lyon - 81 -> 84 Rated: Olympique Lyonnais recorded a late win against Lille on Sunday evening in Ligue 1's top-match, thanks to Lacazette's eight goal of the campaign. The assist came from Argentine fullback Tagliafico who picked up an 8 match rating and MOTM from L'Equipe.

De Vrij CB – Inter - 84 -> 86 Rated: Inter Milan easily disposed of Sampdoria 3-0, recording their fourth consecutive win in the Serie A. It was an outstanding performance from De Vrij, his best in almost two seasons. Broke the deadlock with an excellent header and then gave a vintage De Vrij performance showcasing his intelligence and above all elegance.

A. Moreno LB – Real Betis - 80 -> 83 Rated: Real Betis recorded a comfortable 2-0 win against Real Sociedad on Sunday afternoon and Alex Moreno assisted both of the goals for his side and also managed to keep a clean sheet. There are a few other options who could be in instead of the Spaniard but two assists and a clean sheet should be enough.

Grimaldo LB – SL Benfica - 82 -> 84 Rated: Benfica continued their good run in the Liga NOS and recorded another comfortable victory with a 5-0 against Chaves on Saturday. Spanish left-back Grimaldo was one of the goalscorer and this plus a clean sheet could result in an inform this week.

Arnold CDM – Wolfsburg - 80 -> 863 Rated: Felix Nmecha registered his first Bundesliga goals as Wolfsburg saw off lowly Bochum and picked up a welcome three points, extending their unbeaten streak across all competitions to now six games. Maxi Arnold was one of the best for the home side, assisting twice from free-kicks.

Bentancur CM – Spurs - 79 -> 82 Rated: Tottenham recovered from 2-0 down to earn a brilliant 3-2 win over at Bournemouth. Rodrigo Bentancur provided a Man-of-the-Match performance as he brought in a sense of intent in the midfield. Coolly finished the winner and once again demonstrated his impact on the side.

C. Vela RW – LAFC - 81 -> 84 Rated: With both MLS Conference finals been played the past weekend I expect a MLS player to be included in the side this week and my choice is LAFC's Carlos Vela who was involved in his side's first two goals, both coming from a corner kick.

S. Mané LM – Bayern - 89 -> 90 Rated: After demolishing FC Barcelona in the Champions League and bidding them adieu, Bayern Munich set their eyes on the Bundesliga again and recorded a 6-2 victory over Mainz 05. The start to his Bayern Munich career has been hit and miss but now on the left side of attack he looks like the ubiquitous nightmare for defences he was years at Anfield. One goal and two assists makes him a strong contender for TOTW7.

C. Wilson ST – Newcastle Utd. - 79 -> 84 Rated: Newcastle United romped to a 4-0 win against Aston Villa to keep pace with the Champions League chasers. Callum Wilson might have impressed Southgate as he scored two goals, added an assist and nearly scored a third as he hit the woodwork. Man of the Match.

V.Osimhen ST – Napoli FC - 83 -> 85 Rated: Napoli continued their impressive run of form in the Serie A as they recorded another comfortable win with a 4-0 victory over Sassuolo at the Diego Armando Maradona Stadium on Saturday. Victor Osimhen was the star of the show, scoring three of the four goals for his side and picked up an 8.5 match rating and MOTM.

I. Meslier GK – Leeds Utd. - 77 -> 81 Rated: Liverpool fell to their first Premier League defeat at Anfield since March 2021 on Saturday night as Leeds united moved out of the relegation zone with a thoroughly deserved 2-1 victory. Meslier delivered an insane performance that daym finishing the game with a total of 9 save and deservedly picked up MOTM.

W. Anton RB – VfB Stuttgart - 75 -> 81 Rated: Waldemar Anton struck a late winner as VfB Stuttgart came from behind to beat Augsburg 2-1 and move out of the Bundesliga relegation-zone and could be the one picking up the inform this week.

Zulj CAM – LASK - 75 -> 81 Rated: One of a few gold players who scored a hat-trick the past weekend is former Bochum midfielder Zulj. LASK took all three points in a 4-1 win against Wolfsberger AC and with Zulj scoring three times I expect him to be included.

Candreva RM– Salernitana - 83 -> 83 Rated: Salernitana recorded a surprise 3-1 victory away at Lazio on Sunday afternoon, ending the home side's winstreak. Veteran Antonio Candreva was one of the best player for his side, scoring a goal and was rewarded with a 7.5 match rating.

Olayinka LM – Slavia Praha - 75 -> 81 Rated: Lower rated gold players from smaller league often have been ignored despite their good goal contributions so this could either go the one or the other way. Olayinka scored twice and assisted another in Slavia's 4-1 win against Bohemians and could find his way into the side.

Batshuayi ST – Fenerbahce - 77 -> 81 Rated: A pretty familiar face we should see this week in TOTW is Batshuayi. The Belgian international scored three goals and assisted another in Fenerbahce's 5-2 win against Istanbulspor.

Openda ST – RC Lens - 75 -> 81 Rated: RC Lens cemented their second place in the Ligue 1 Uber Eats standings and remained unbeaten at home after they took all three points in a comfortable 3-0 victory against Toulouse. It was a bit of hard work to do for the home side but Openda, who got subbed on in the second half, turned things the right way for his side as he scored all three goals.

Josué CAM – Legia Warszawa - 72 -> 79 Rated: Legia recorded another win in the Polish top-flight, this time they beat Jagiellonia with 5-2 and Josué was the best player on the pitch, scoring three of the goals.

S. Kowalczyk CAM – Pogón Szczecin - 69 -> 77 Rated: The next Ekstraklasa player this week could come in the name of Kowalczyk from Pogon after he scored three goals and registered an assist in his side's 4-2 victory over Miedz.

Reiss Nelson RW – Arsenal - 73 -> 79 Rated: Arsenal remain on top of the Premier League after they recorded another convincing win, beating Nottingham 5-0. Reiss Nelson came on for the injured Saka and ended the game with two goals and an assist and was named MOTM.

Toivonen ST – Malmö FF - 73 -> 79 Rated: Swedish side Malmö ended their winless run in the league and finally recorded a victory after three consecutive losses, beating Varberg with 5-2 and Toivonen scored three of the goals.