FIFA22 Team of the Week 36 Prediction

Published on by Simpleblue 4 Comments 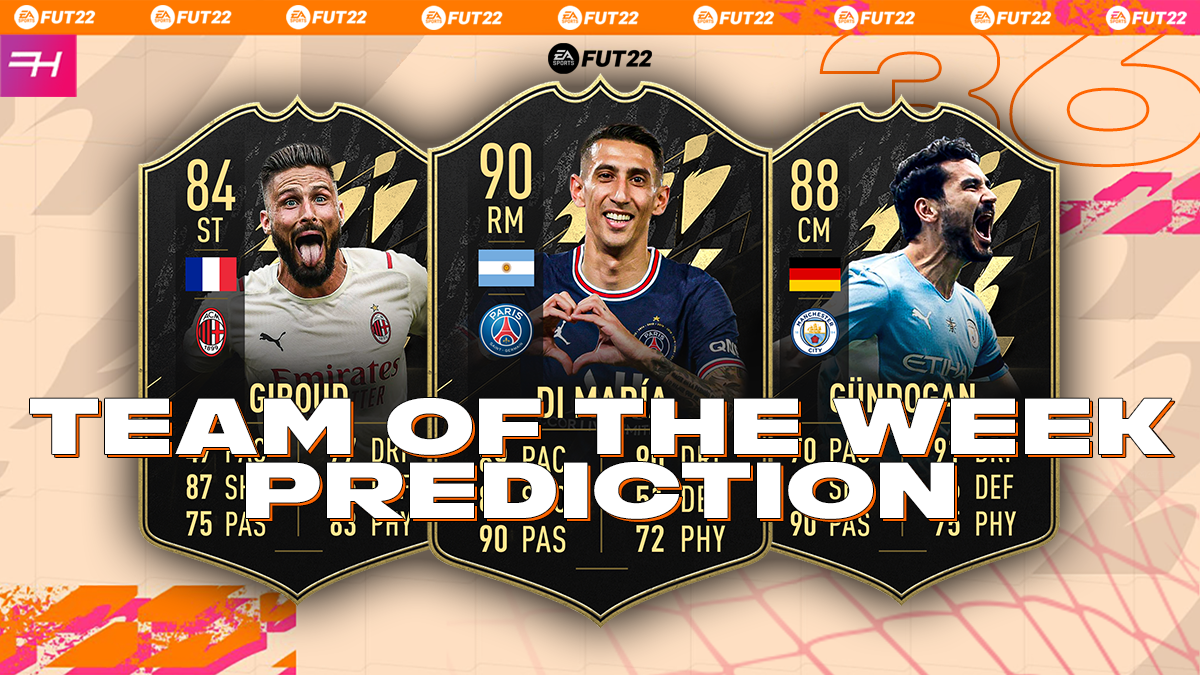 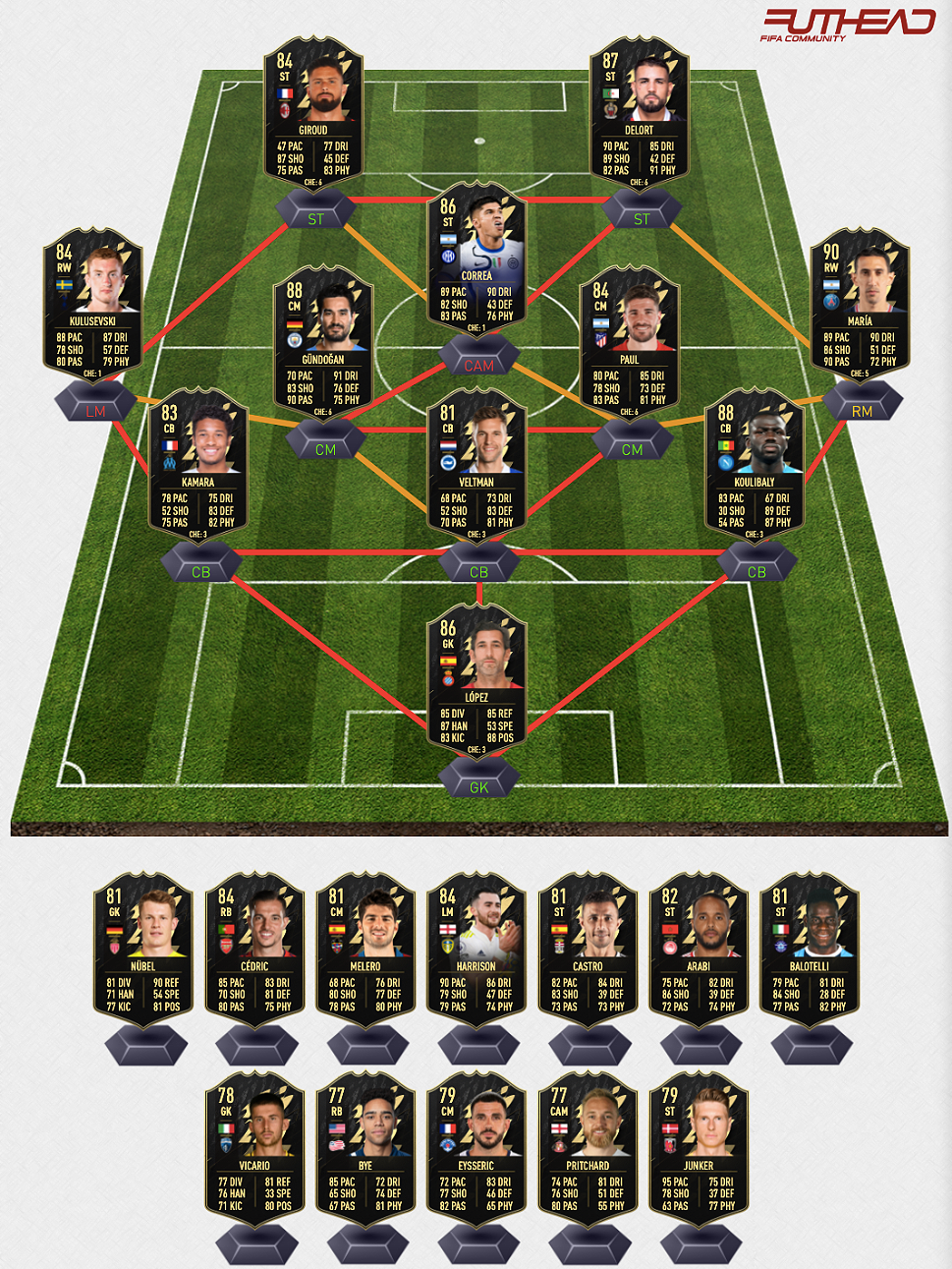 D. Lopez GK – RCD Espanyol - 84 -> 86 Rated: Espanyol Barcelona secured another season of top-flight football with a 0-0 draw against now relegated Getafe. With a low number of gold goalkeeper options this week I'm going with a potential third inform for Diego Lopez after he made a total of five saves to secure the nessecary draw for his side.

B. Kamara CB – Marseille - 80 -> 83 Rated: Olympique Marseille secured second place and automatic UEFA Champions League qualification on the final day of the season as they beat RC Strasbourg while Monaco were held by Lens. Gerson was the one who stood out with two goals but with him recently being included in TOTW I had to choose another player and due to the lack of defender options I decided to go with Kamara who played at CB and had a pretty solid game in his last appearance for Marseille.

J. Veltman CB – Brighton - 77 -> 81 Rated: Brighton & Hove secured a comeback victory with a 3-1 win over West Ham, cancelling Michail Antonio's opener and ended the visitor's hopes of Europa League football next season. Veltman had a real ding dong battle with Antonio. While the West Ham striker scored a stunning goal, albeit with a push on Dunk, he didn't get much of joy out of the Dutchman. And then got his first goal of the season as a well-struck strike had too much power for Fabianski.

K. Koulibaly CB – Napoli - 87 -> 88 Rated: Decisions have been made in the Serie A the past weekend with AC Milan winning the title while Napoli secured a 3-0 win against relegated Spezia Calcio, a result which was meaningless in the end as they already had third placed secured. There haven't been standout performances in that game and despite just picking up a 6.5 match rating from Gazzetta I'm still including Koulibaly who kept a clean sheet also recorded an assist.

I. Gündogan CM – Manchester City - 87 -> 88 Rated: Manchester City secured the 2021/22 Premier League title thanks to a 3-2 comeback win over Aston Villa in which was a tense final day at the Etihad. Ilkay Gündogan was by far the player of the match for his side in this stunning win over Aston Villa. In what could have been his final game for Man City, the German midfielder offered those driven runs into the box to hand them the numerical advantage. The move paid off as he bagged a quick brace to help his side secure the title.

R. De Paul CM – Atletico de Madrid - 82 -> 84 Rated: Atletico Madrid ended their 2021/22 campaign on a high and secured third place in the La Liga standings with a 2-1 victory over Real Sociedad. De Paul was reduced to defensive work in the first half, but he came to life in the second half with his goal in the 51st minute, where he converted Griezmann's pass to put it beyond Remiro. De Paul's promising end to the season should offer hope that he will produce an oustanding 202/23 campaign.

Di Maria RM – Paris SG - 89 -> 90 Rated: Ligue 1 informs are a bit tough to predict this week with Ligue 1 TOTS coming on friday so you could expect big names like Mbappé, who scored a hat-trick, to definetly miss out on Wednesday. Heading into the game on the back of Mbappe's contract renewal, Di Maria played his last game for PSG and dropped an attacking masterclass. He probed the Metz defenders quite well and always looked dangerous when taking on defences. He notably produced a superb assist for Mbappe's opener before eventually getting on to the scoresheet in the second half. A perfect farewell for the Argentine but he also could miss out this week if EA decide's to give him an End of the Era SBC.

D. Kulusevski RW – Spurs - 81 -> 84 Rated: A draw would have been enough for Tottenham but they booked their return to Champions League in style, trashing relegated Norwich City 5-0 with Heung-Min Son sharing the Golden Boot with Mohamed Salah. Kulusevski has been a relevation since joining Spurs from Juventus in the January window. He scored once in each half to take his season tally to five goals, on top of three assists and was named MOTM by Sky. Only his recent TOTS Moments card could go against an inform, Bentancur would be another option then.

O. Giroud ST – Milan - 82 -> 84 Rated: AC Milan went into the final game of the 2021/22 Serie A campaign knowing that a win would guarantee them a 19th Serie A title and Pioli's men turned up on the night, securing a comfortable 3-0 victory and ended their 11-year wait to win the Scudetto. The Frenchman has been off-colour in recent weeks but rose to the occasion smartly by scoring twice. His brace eased Milan's nerves, handing them the pedestal to win the Scudetto and Giroud's experience proved to be the difference-maker.

J. Correa ST – Inter - 84 -> 86 Rated: Inter Milan emerged victorious from their last Serie A fixture of the season against Sampdoria but fell short of a domestic treble as AC Milan ran away with the league title. It was a solid outing to end a disappointing season for Correa. The Argentine scored twice within minutes to give Inter a three-goal lead and could finally pick up another upgrade to his OTW card.

A. Delort ST – OGC Nice - 86 -> 87 Rated: Another one who could make it into the side on Wednesday or miss out if he'll get a TOTS card is OGC Nice's forward Andy Delort. Nice took all three points with a narrow 3-2 victory over Reims and secured qualification for Europa Conference league and Delort took his league tally to now 16 goals for the season after scoring all three goals for his side.

A.Nübel GK – AS Monaco - 75 -> 81 Rated: AS Monaco were dealt a huge blow with seconds to play as RC Lens equalised with the last kick of the game to secure a 2-2 draw and condemn Philippe Clement's side to the Champions League play-off round. It could have been much worse if it wasn't for Monaco's shot-stopper and FC Bayern loanee Nübel who made a total of 8 saves and was named in L'Equipe's final TOTW.

Cedric RB – Arsenal - 76 -> 84 Rated: Arsenal cruised to victory over Everton on the final day of the 2021/22 Premier League campaign even though victory for Tottenham over Norwich ensured it was only good enough for fifth place and Europa League qualification. It was another solid outing from the Portuguese right-back. Good defensively as he tracked runs but did not have a lot to do. Took his goal superbly well to cap off a good afternoon and also got an assist.

Melero CM – Levante UD - 77 -> 81 Rated: Even though UD Levante managed to make it back to back wins in La Liga it wasn't enough for them to survive which means they'll go down to La Liga 2 for at least one season now. Their 4-2 victory away at Rayo Vallecano could be enough for an inform with Melero scoring twice from the CM position.

J.Harrison LM– Leeds United - 82 -> 84 Rated: Leeds United secured their Premier League safety on the final day of the season with a 2-1 win at nine-man Brentford after Burnley's defeat at home to Newcastle opened the door for Leeds to leapfrog them in the table. Jack Harrison derive some joy on the left flank and got the better of Ajer on several occasions. A handful on the day, he scored one of Leed's most important Premier League goals in stoppage time to guarantee their status in the top flight for another season.

R. Castro ST – FC Cartagena - 77 -> 81 Rated: There have been quite a lot of hat-tricks the past weekend from gold players and I expect not everyone of them being included in the side on Wednesday. One of those hat-trick came from the La Liga 2 in the name of Ruben Castro in Cartagena's comfortable 5-0 victory over relegated Amorebieta.

El-Arabi ST – Olympiacos CFP - 79 -> 82 Rated: Most of he leagues had their final matchdays with some decisions have been made, one league which also ended on the weekend but where the title was already decided was the Greek Super League. Olympiacos took the title and also won their last fixture 3-2 against AEK Athen and El-Arabi once again proved crucial, ending the game with three goals.

M. Balotelli ST – Adana Demirspor - 76 -> 81 Rated: Probably the best performance the past weekend, but definetly one of the goals of the season is coming from the Turkish Süper Lig this week. Adana Demirspor finished their 2021/22 campaign in style, trashing relegated Goztepe with 7-0. Mario Balotelli was the best player that day by a mile, scoring five of the goals for his side. But most impressive was his spectacular goal when he first did several step-overs in the box before he then scored with a rabona.

Vicario GK – Empoli - 71 -> 78 Rated: For the second week in a row Empoli's shot-stopper annoyed the oppenents attacker and denied them all three points. This week it went even better for his side with Vicario making a total of 9 saves to make sure his side picked up all three points with a narrow 1-0 win against Atalanta.

B. Bye RB – New England - 69 -> 77 Rated: The Major League Soccer had a ton of games counting toward's this weeks TOTW so expect at least one inform from it. One of them could be New England's Brandon Bye who assisted all three goals in his side's narrow 3-2 win against Cincinnati FC.

Eysseric CM – Kasimpasa - 72 -> 79 Rated: We usually have the reserves full of hat-tricks which makes it easier to decide but this week hat-tricks from silvers have been nearly non-existent and therefore there's room for others. One of these others who could get in is Eysseric after he scored twice and assisted another in Kasimpasa's 4-2 win against Altay.

Pritchard CAM – Sunderland - 69 -> 77 Rated: Sunderland secured promotion to the Championship with a 2-0 victory over Wycombe Wanderers in the League One play-off final on Saturday afternoon, means Alex Neil's side returned to the second tier after four seasons in League One. Pritchard started the game with fantastic energy and grabbed the assist for Embleton's strike before he got another late on by setting up Stewart.

Junker ST – Urawa Red - 72 -> 79 Rated: Remember Kasper Junker who had a miracle campaign with Bodo/Glimt in 2020? The former Eliterserien top-scorer joined Urawa Red Diamonds after and heated up after a slow start, scoring all three goals in his side's 3-3 draw against Yokohama.