FIFA22 Team of the Week 35 Prediction

Published on by Simpleblue 2 Comments 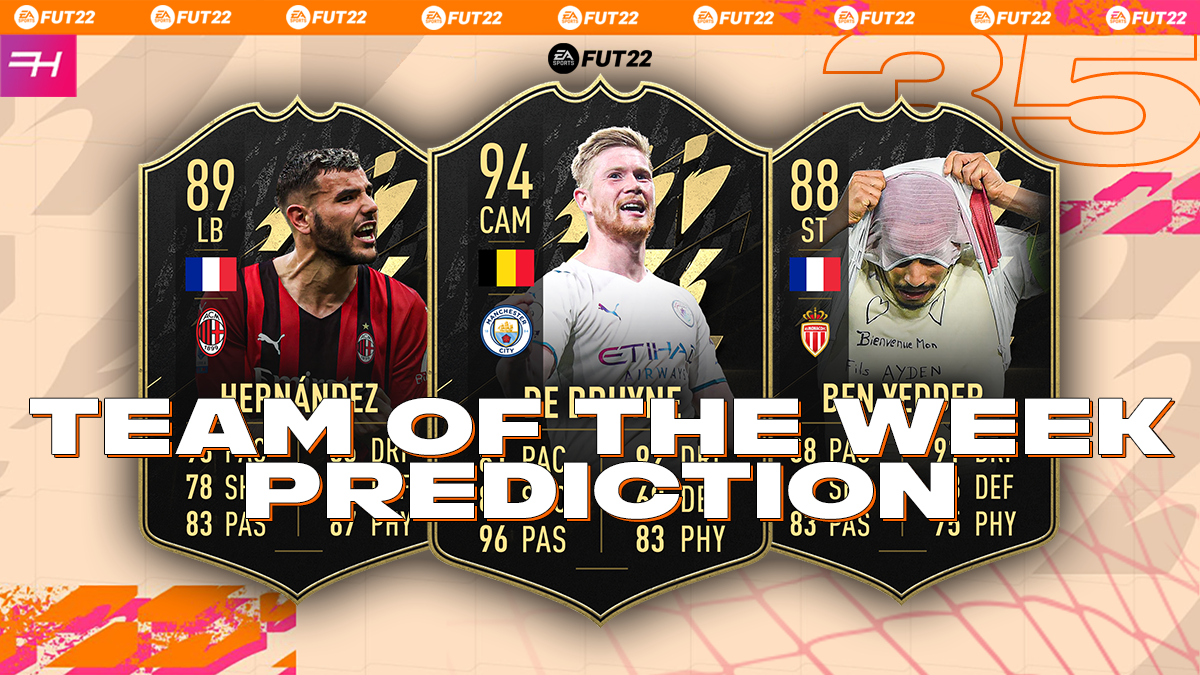 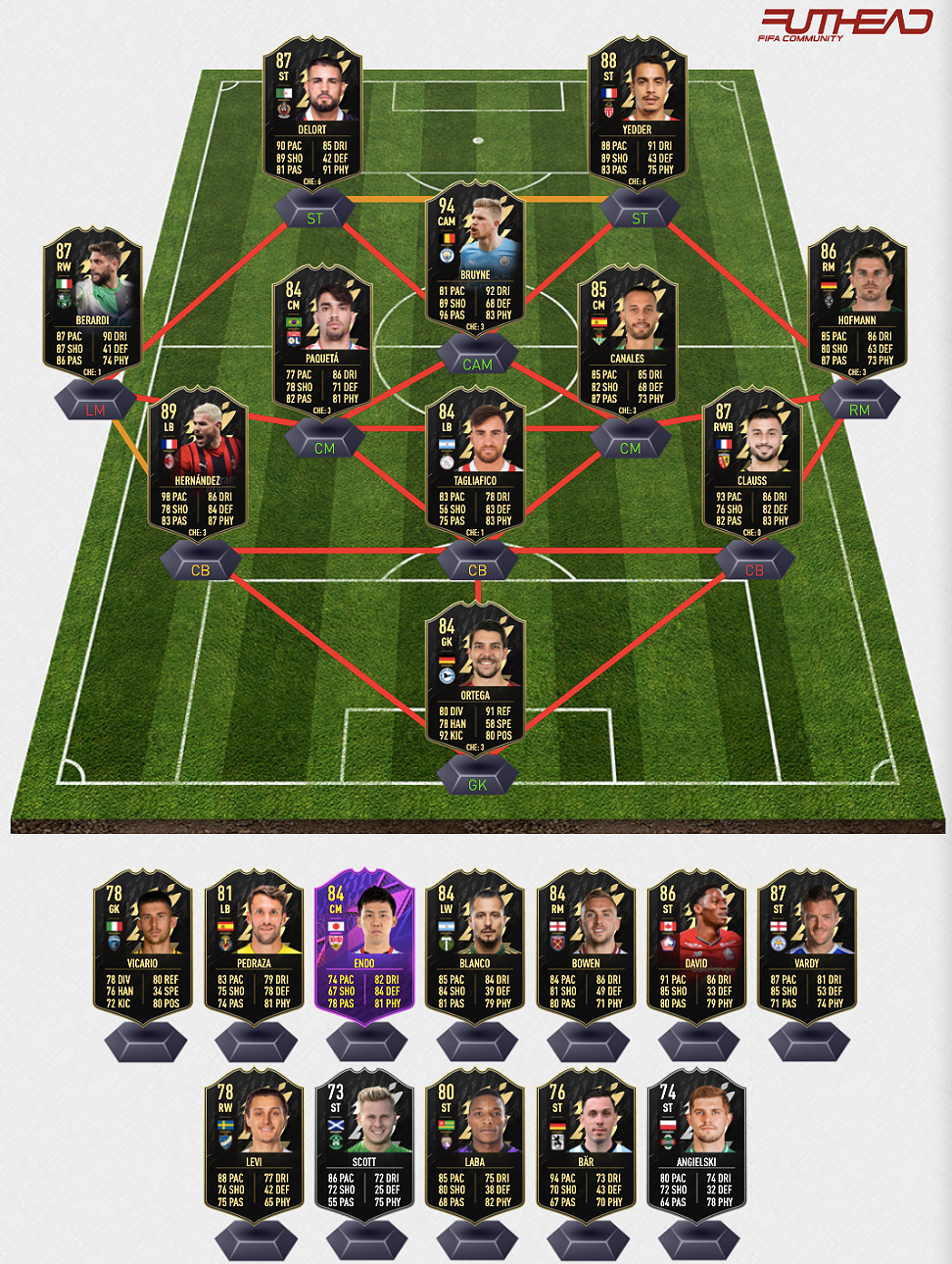 S. Ortega GK – Arminia Bielefeld - 78 -> 82 Rated: There are actually a couple of gold goalkeepers with good performances this week, one of them is Ortega. Bielefeld bowed out of the Bundesliga with their heads held high, although a late Orban strike prevented them from doing the double over RB Leipzig. Bielefeld's Stefan Ortega, who will leave the club, was one of the standout performers and prevented Leipzig from scoring more than once with a total of 9 saves.

T. Hernandez LB – Milan - 88 -> 89 Rated: AC Milan took home a crucial three points in the final home game of the season against Atalanta with a 2-0 victory in front of 75k fans and are now just one point away from lifting the Scudetto. Rafael Leao was the official MOTM but with him being in TOTW32 he can't get in so the next (and deserved) option is Hernandez who scored his side's second and it was a goal after a solo run from his own box.

N. Tagliafico LB –Ajax - 82 -> 84 Rated: Eredivisie had two matchdays counting towards TOTW this week and they secured the league title midweek with a comfortable 5-0 victory over Heerenveen. Tagliafico was one of the goalscorer in that game and with the game confirming the title I expect an inform from it.

J. Clauss RWB – RC Lens - 86 -> 87 Rated: RC Lens fought back from a goal down to beat Troyes 3-1 at the Stade de l'Aube on Saturday. Jonathan Clauss, who just was named into the official Ligue 1 Team of the Season, once again showed his worth for his side, ending the game with a goal and an assist added to his superb overall performance.

Canales CM – Real Betis - 83 -> 85 Rated: Real Betis secured their fifth place in the La Liga standings and made sure they'll compete in the UEFA Europa League next campaign with a with a 3-0 victory away at Valencia on Tuesday last week. Some La Liga informs are prevented due to the La Liga TOTS being out on friday but it shouldn't affect Canales who scored one and assisted another for his side. Even though a TOTS for him would be deserved I can't see him getting in through the voting and thus he should pick up an inform this week.

L. Paqueta CM – Lyon - 81 -> 84 Rated: Olympique Lyon went back on winning ways after they overcame Nantes 3-2 in an entertaining game at the Groupama Stadium on Saturday. Lucas Paqueta got himself one goal in that game and picked up an 8 match rating from L'Equipe and even though he somehow didn't made it into their TOTW I'M including him and this would be his first inform of the season too.

De Bruyne CAM – Manchester City - 93 -> 94 Rated: Manchester City demolished Wolverhampton Wanderers 5-1 at the Molineux Stadium in the Premier League on Wednesday last week, coming into the game on the back of a 5-0 mauling of Newcastle United and getting even closer to securing the Premier League title. Inlcuding a player right after he got a TOTS card usually isn't the way but this time it's simply inevitable after Kevin De Bruyne delivered an absolute masterclass, scoring four of the five goals for his side.

J. Hofmann RM – M'gladbach - 84 -> 86 Rated: A Borussia Mönchengladbach blitz of three goals in the space of just nine minutes either side of half-time saw the Foals romp from behind to seal an emphatic 5-1 win over Hoffenheim on Saturday. Jonas Hofmann was the standout player that day, netting twice and also recording an assist.

D. Berardi RW – Sassuolo - 86 -> 87 Rated: With Serie A Team of the Season coming in the next couple of weeks, this potential inform could juice his TOTS card even more. Berardi once again was crucial for Sassuolo in their 3-1 victory away at Bologna on Sunday, scoring one and assisting another and being awarded with a 7.5 match rating from Gazzetta.

Ben Yedder ST – AS Monaco - 87 -> 88 Rated: AS Monaco climbed up to second place in the Ligue 1 Uber Eats table, coming back from behind to beat Stade Brest 4-2 at the Stade Louis II which was the club's ninth-consecutive league win. The visitors went ahead 2-0 in the first 30 minutes of the game but a hat-trick from Wissam Ben Yedder put Monaco on winning ways.

A. Delort ST – OGC Nice - 86 -> 87 Rated: Nice had lost the Coupe de France final, missing out not only on a first piece of silverware since 1997, but also failing to already secure a UEFA Europa League place for next season. They found the net four times after the break to come back from two goals to beat struggling Saint-Etienne on Wednesday with Andy Delort putting his name on the scoresheet twice plus adding an assist to his game.

G. Vicario GK – Empoli - 71 -> 78 Rated: There have been two really strong goalkeeper performances this week in Italy's top-flight and both really deserve an inform. One of them was Empoli's Vicario who not only managed to make 7 saves, with most of them being really incredible, but he also saved a penalty five minutes before the final whistle to deny Salernitana all three points and picked up an 8.5 match rating which is really rare for a goalkeeper.

Pedraza LB – Villareal CF - 77 -> 81 Rated: A pretty much cemented inform should come from Villareal this week who also had two fixtures counting towards TOTW. The inform for Pedraza tho would be for his performance in Villareal's midweek game where they picked up all three points with a 5-1 win away at Rayo Vallecano with Pedraza scoring twice and assisting another.

W. Endo CM – VfB Stuttgart - 82 -> 84 Rated: Going into the final chapter of the 2021/22 campaign, Stuttgart and Cologne both had plenty to play for with Stuttgart starting in the relegation play-off spot, while Cologne arrived with a UEFA Conference League place secured but in the hope of upgrading to a Europa League spot. The game ended in the most dramatic way in favour for Stuttgart with Endo heading home in the 92nd-minute winner to give his side a 2-1 win, paired with Hertha's defeat at Dortmund, keeps VfB in the Bundesliga and thus I expect at least a TOTW, if not a Hero item which I'm predicting.

S. Blanco LW– Portland Timbers - 81 -> 84 Rated: It was raining goals Saturday night at Providence Park, giving way to a new Portland Timbers record as the hosts recorded a 7-2 win over Kansas City. Portland's number 10 Blanco showed his game-changing ability, ending the game with two goals and two assist and was named Player of the Week for his performance.

Bowen RM – West Ham- 82 -> 84 Rated: Manchester City survived a huge scare to draw at West Ham on Sunday afternoon, meaning West Ham are seventh but still in with a shout for sixth, sitting two points behind Manchester United. Bowen, who didn't get a TOTS (no one knows why), was the livewire in attack for his side. He caused Man City all sorts of problems and scored both goals for his side, picking up a huge 9 and MOTM from Sky. If it's not him getting the inform it could also be Fabianski who made a couple of good saves too but most important was his penalty save late in the game against Mahrez so it could either the one way or the other.

J. David ST – LOSC Lille - 84 -> 86 Rated: This is actually an inclusion I'm not 100% sure about but due to the lack of striker options this week this is a bit of a punt. Lille took all three points after a superb second-half comeback against Nice to beat their opponents 3-1. David went into the game nine games without scoring, an eternity for a player who, at the start of the season, was one of the favourites in the race for the title of top scorer. David ended up finding his way back to the goals and at the worst time for Nice, scoring twice to put his side on winning ways.

J. Vardy ST – Leicester City - 86 -> 87 Rated: Leicester City snapped a seven-game winless streak with a 3-0 win over Norwich City midweek and made it back to back wins on the weekend with a 5-1 away at Watford. Normal service has been resumed for Jamie Vardy who scored twice in both games, taking his league tally to now 14 goals. The other two options are Barnes, who also got goals and assists in both games and James Maddison.

J. Levi LW – IFK Norrköping - 70 -> 78 Rated: Jonathan Levi could be one of two players from Norrköping to pick up the inform this week after his side recorded a 5-1 victory over bottom side Sundsvall and him scoring twice and assting another two. The other one would be midfielder Ortmark who also scored twice and assisted two.

J. Scott ST – Hibernian - 63 -> 73 Rated: Hibernian bounced back from their defeat against against Dundee in the Scottish relegation group with a comfortable 4-0 win against St. Johnstone. James Scott scored three of the goals for his side and should pick up the inform this week.

Laba ST – Al Ain FC - 74 -> 80 Rated: This one could easily be ignored as it happened in the past. Kodjo Laba scored four times for Al-Ain, the only side in Fifa from the UAE Pro-League, in their comfortable 5-0 against Al-Jazira and should end up in the side this week.

Marcel Bär ST – 1860 München - 68 -> 76 Rated: There have been a ton of games with a high scoring in Germany's third-highest divison the past weekend, one of them being 1860 Munich's 6-3 win against Borussia Dortmund II. The win secured their participation in next seasons DFB-Cup and Marcel Bär was absolutely oustanding that day, scoring twice and getting a hat-trick of assists.

Angielski ST – Radomiak Radom - 64 -> 74 Rated: The title is already decided in the Polish Ekstraklasa but the relegation battle is still going on and Radomiak Radom put even more pressure on Wisla Krakow with a 4-2 victory. Angielski scored three times for his side and should pick up the inform on Wednesday.