FIFA22 Team of the Week 34 Prediction

Published on by Simpleblue 5 Comments 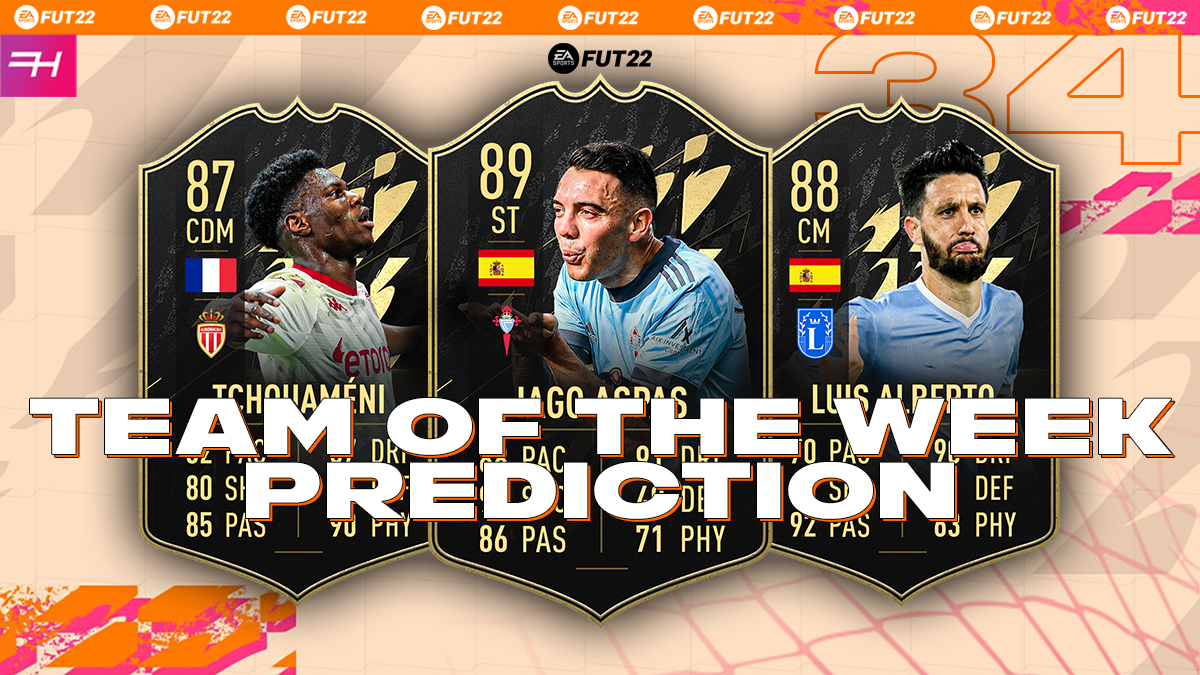 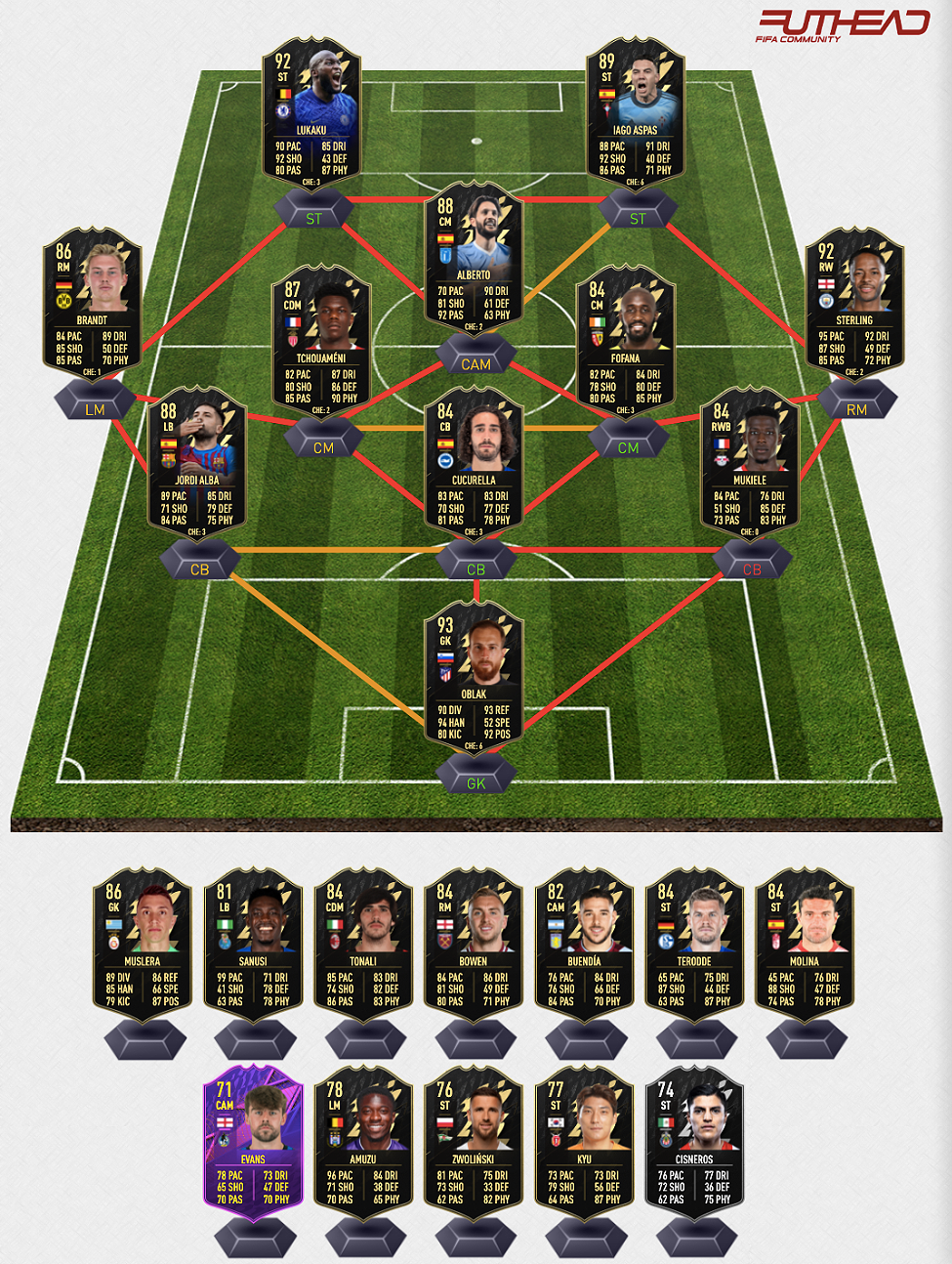 Jan Oblak GK – Atletico de Madrid - 92 -> 93 Rated: Atletico Madrid outplayed city rivals Real Madrid to earn a 1-0 win on Sunday night that betraved the wealth of chances created in the club's first La Liga victory in the capital derby since 2016. Oblak produced a tremendous performance in the goal on Sunday, making a string of saves to retain his clean sheet and earn his side a narrow win. After a season wherein he has blown hot and cold, the Slovenian goalkeeper did well to stand up to the challenge against Real Madrid.

N. Mukiele RWB – RB Leipzig - 81 -> 84 Rated: Christopher Nkunku scored twice as RB Leipzig trashed Augsburg to claim back into the UEFA Champions League qualification places, with one game to go. Two of the goals have been assisted by French wingback Nordi Mukiele who should make it into the side this week.

Cucurella CB – Brighton - 81 -> 84 Rated: Manchester United suffered a 4-0 trouncing at the hands of Brighto & Hove Albion in the Premier League on Saturday and are now out of the competition for a UCL spot. Caicedo was named Man of the Match by Sky but with him being bronze it's hard to fit him in and thus I instead went with Cucurella who had a fantastic performance too. He showed great work rate, tenacity, and an insatiable hunger to win the ball. An early second half goal fired into the top corner was reward for a great all round performance.

J. Alba LB – FC Barcelona - 87 -> 88 Rated: Barcelona secured their spot in next season's Champions League with Saturday's 2-1 victory over Real Betis. As the clock continued to tick, it looked like a 1-1 draw was on the cards and Betis would secure a point, only for Alba to save the day with a screaming volley from a Dani Alves cross which thundered into the top corner and secured the win.

A. Tchouameni CDM – AS Monaco - 86 -> 87 Rated: The final Friday night fixture of the Ligue 1 Uber Eats season kicked off at the Stade Pierre Mauroy with LOSC hoping to finish strong, despite three defeats in their last four games while in contrast, Monaco were looking to extend their seven-match winning run as they hunted down a place on the podium and recorded a vital 2-1 win to lift themsleves up to second in the chase for Champions League qualification. The 22-year-old midfielder Tchouameni was in sparkling form yet again as Monaco made it eight wins on the bounce. The Frenchman produced two wonderful finishes on the night to hand his side maximum points. This inform is already really good, just imagine his TOTS card.

S. Fofana CM – RC Lens - 82 -> 84 Rated: RC Lens went back on winning ways in the Ligue 1 after two draws in a row with a narrow 2-1 victory away against Reims and the winning goal came from Seko Fofana in the 91st minute of the game and it looks like his Headliner card will finally receive another upgrade.

L. Alberto CM – Latium - 87 -> 88 Rated: Lazio Roma continued their push for European qualification spots and made it back to back wins in Serie A with a comfortable 2-0 victory against Sampdoria Genoa on Saturday. Luis Alberto could pick up his next inform this week after he scored one and assisted another and helped his side picking up all three points.

J. Brandt RM – Borussia Dortmund - 84 -> 86 Rated: Borussia Dortmund survived a scare away to bottom club Greuther Fürth, claiming a 3-1 win to secure second place in the league. Brandt put in a strong performance and scored a match-winning brace to take his tally for the season to nine goal. The playmaker has been criticised a fair bit this season, but his tally of nine goals and ten assists certainly doesn't make for a bad reading.

Sterling RW – Manchester City - 91 -> 92 Rated: Manchester City took a giant step towards retaining the Premier League title on Sunday as they dispatched Newcastle United with ease at the Etihad. Sterling looked extremely sharp throughout the game and caused Matt Targett all sorts of problems with his dribbling, exquisite control and swift twists and turns. He grabbed a brace and rounded off Manchester City's fine performance that day.

R. Lukaku ST – Chelsea - 90 -> 91 Rated: A new era began for Chelsea on Saturday as their takeover was confirmed earlier in the day but on the pitch they played out a frustrating 2-2 draw with Wolverhampton Wanderers which put a bit of pressure on them for their last games for the UCL qualification spots. With Premier League TOTS being in packs atm it's a bit more difficult to pick the players and thus I can see Lukaku getting in after he scored both of the goals and picked up MOTM.

I. Aspas ST – RC Celta - 88 -> 89 Rated: Celta Vigo went back on winning ways after two winless La Liga games with a comfortable 4-0 victory against relegation-battiling and bottom of the table Deportivo Alaves. Iago Aspas once again showed why he's a consistent La Liga goal scorer with two goals and assist to his name, taking his tally to now 17 goals and 5 assists.

F. Muslera GK – Galatasaray - 84 -> 86 Rated: With most of the decisions already being made in the Turkish Super Lig, the fixture between Basaksehir and Galatasaray was nothing more than a prestige duell and both side's shared points with the game ending in a 0-0 draw. Galatasaray tho was pressured by their opponents the whole game, with Basaksehir having a total of 21 shots and it was only because of Muslera that his side got away with a point, ending the game with a 10 saves.

Sanusi LB – FC Porto - 76 -> 81 Rated: FC Porto secured their 30th Liga NOS title on Saturday with a narrow 1-0 victory away against rivals Benfica. The golden goal came from Porto's left-back Sanusi in the 93th minute of the game which sealed all three points and made sure Porto can start celebrations.

S. Tonali CDM – Milan - 81 -> 84 Rated: AC Milan responded brilliantly to the gauntlet laid down by arch-rivals Inter Milan from earlier in the week to regain the initiative in the Serie A title race as they came back to beat Hellas Verona with 3-1. The Italian midfielder Tonali became the first player in Serie A to score a brace on his birthday. It was a seminal performance from him, working tirelessly all night and pushed up whenever he got the chance. His ability to be clinical in good positions made the difference on the night.

E. Buendia CAM– Aston Villa - 79 -> 82 Rated: Aston Villa ended Burnley's run of form with a convincing 3-1 victory away which put Gerrard's men to just one point off 10th-place. The Argentinian was the best player on the park this afternoon as he marked his first start in five with a goal and assist. It was an incredible weight of pass for Ings' opener while, for his goal, he peeled off brilliantly before slotting home.

Bowen RM – West Ham- 82 -> 84 Rated: West Ham heaped further misery on already-relegated Norwich on Sunday, romping to a 4-0 victory at Carrow Road. Jarrod Bowen, who should have gotten a Team of the Season card, was absolutely excellent on that day, ending the game with three assists and has now 20 goal involvements in the league this campaign.

Terodde ST – FC Schalke 04 - 75 -> 84 Rated: Schalke will be playing in the Bundesliga next season after the Royal Blues produced a come-from-behind win to down fellow promotion chasers St. Pauli and sending Die Knappen up. This game should definetly produce an inform and one could be Bundesliga 2 top-scorer Simon Terodde who scored twice with one from the penalty spot, taking his tally to 29 goals in the league this season.

J. Molina ST – Granada CF - 81 -> 84 Rated: Mallorca and Granada faced each other on Saturday in La Liga in which was a six-pointer for both sides in their battle against relegation and Getafe came out with an impressive 6-2 victory which put them up to 17th with a two point gap to Mallorca. Jorge Molina was the outstanding player that night, finishing the game with two goals and an assist after he got subbed on early in the second half.

A. Evans CAM – Bristol Rovers - 61 -> 71 Rated: One of the most dramatic games of the League Two campaign took place between Bristol Rovers and Scunthorpe with Bristol going into the game level on points with Northampton but with a goal difference that was five goals worse than the Cobblers. Bristol trashed Scunthorpe 7-0 at the Memorial Stadium to grab the final automatic promotion spot from Northampton with Evans putting in a heroic performance. He scored twice and assisted another two and was the oustanding player that day from a bunch of heroes.

F. Amuzu LM – RSC Anderlecht - 70 -> 78 Rated: RSC Anderlecht bounced back from their draw in their previous game against Bruges with a comfortable 4-0 victory away against Royal Antwerp. Francis Amuzu was the decisive player in the game, scoring three of the goals for his side from the LM position.

Zwolinski ST – Lechia Gdansk - 67 -> 76 Rated: Even though all the action in the Polish Ekstraklasa is going at the top of the table with two sides fighting for the title, the action last weekend was between Gdansk and Stal Mielec. Zwolinski, who has scored twice until the final minutes of the game, added a potential third which was cancelled by VAR in first place just to finally be rewarded 3 minutes later and sealed his hat-trick and all three points for Gdansk.

Joo-Min Kyu ST – Jeju United - 69 -> 77 Rated: Another inform could come from the Korean K-League this weekend and this is after Joo-Min Kyu scored all three goals in his side's 3-1 win at home to Gimcheon Sangmu.

Make sure to check out my Prediction for the Featured TOTW and TOTS Moments player on Twitter!