FIFA22 Team of the Week 33 Prediction

Published on by Simpleblue 2 Comments 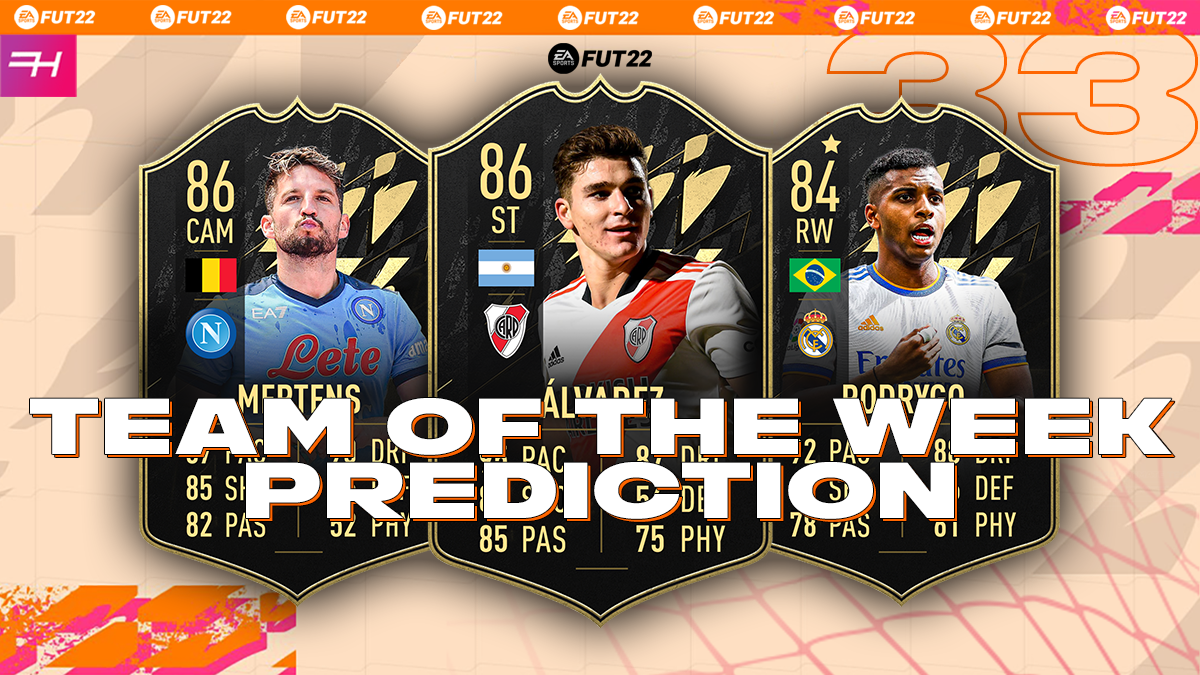 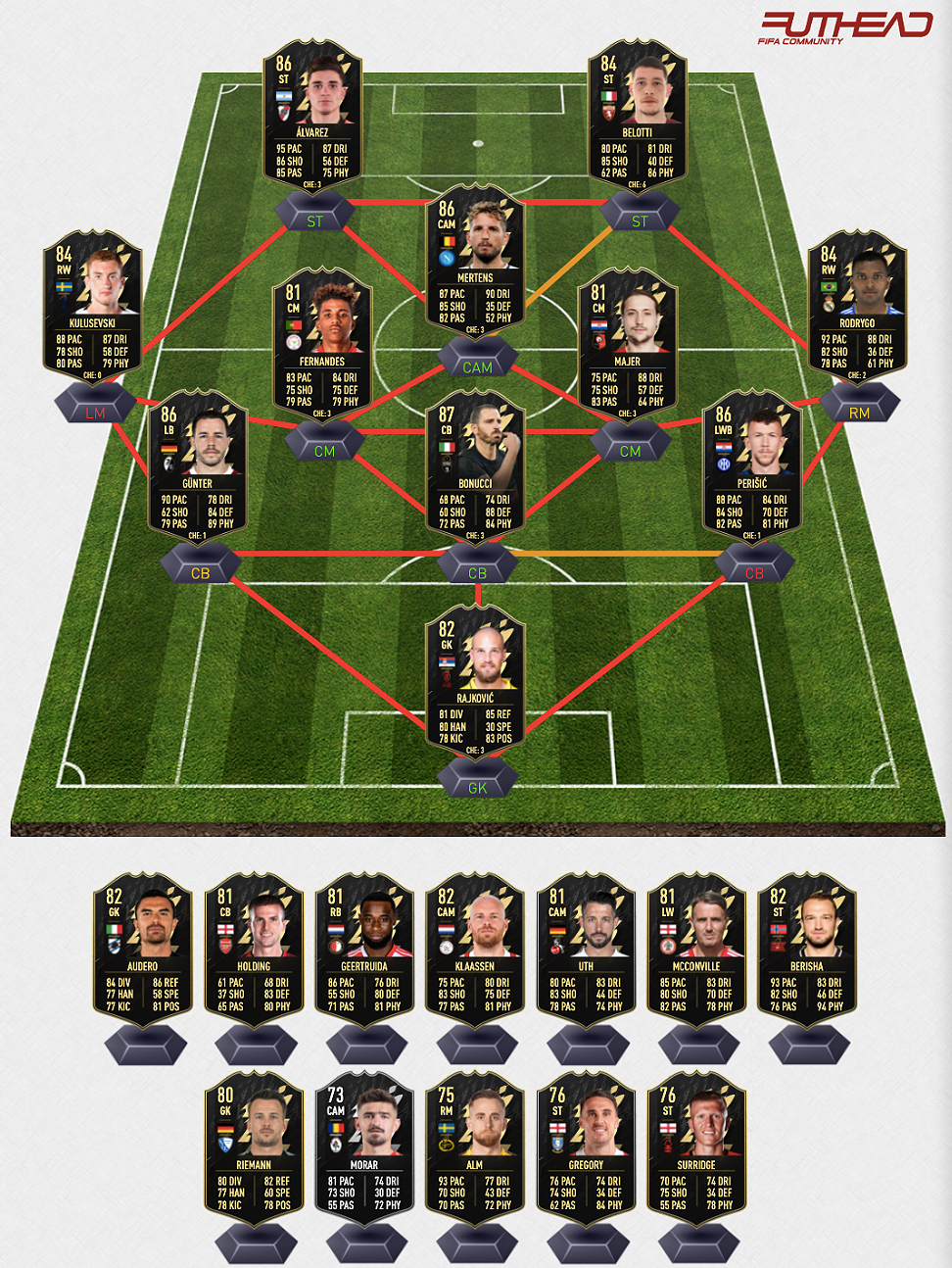 P. Rajkovic GK – Stade de Reims - 78 -> 82 Rated: Most people would expect Pickford to be featured after his performance against Chelsea but with a three weeks gap I think it's too early for him and therefore I'm going with Stade Reims' shot-stopper Rajkovic who made a total of 8 saves in his side's 2-1 win over Lorient and claimed an 8 match rating from L'Equipe.

I. Perisic LWB – Inter - 84 -> 86 Rated: Inter Milan returned to winning ways in Serie A with a 2-1 victory over Udinese after having suffered a shock loss to Bologna earlier in the week and can't afford to drop more points in the title race. Perisic scored for the second time in two games and will be glad that his side held onto the lead. He look jaded but managed his energy well, impressing at both ends of the pitch and has rediscovered his best form at the right time.

Bonucci CB – Piemonte Calcio - 86 -> 87 Rated: Juventus Turin saw off Venezia in a game that was closer than anticipated and recorded important three points. If goals were birthday candles, the 35-year-old took his Juventus goal tally to 35 on the night. The veteran was largely calm and assured and stepped up when his side needed him. Securing all three points on the night has more or less assured the Bianconeri of a top-four finish.

C. Günter LWB – SC Freiburg - 84 -> 86 Rated: A sensational Saturday evening contest saw Freiburg triumph against a battling Hoffenheim by the odd goal in seven, with Christian Streich's side rewarded for their efforts with an overnight place in the Bundesliga's top four. Despite conceding three, Günter was named MOTM for his goal and assist and with him being temporarily POTW his TIF should be on the way.

L. Majer CM – Stade Rennais FC - 76 -> 81 Rated: Stade Rennais beat struggling AS Saint-Etienne 2-0 on Saturday to maintain their grip on third place in the Ligue 1 Uber Eats table. The 24-year-old Majer once again showed what a class act he is with a brace that lifted him onto fiv goals for the campaign in Ligue 1.

G. Fernandes CM – Caykur Rizespor - 77 -> 81 Rated: Trabzonspor took the headlines in the Turkish Süper Lig last weekend after they claimed the title for the first time since 38 years but an inform could come from Rizespor after Gedson Fernandes scored twice and assisted another in their trashing 7-1 against Goztepe.

D. Mertens CAM – Napoli - 84 -> 86 Rated: Napoli ran riot against a hopeless Sassuolo side as Luciano Spalletti's men put half-a-dozen goals past Andrea Consigli to return to winning ways in Serie A. Despite scoring six goals no Napoli player really stood out when it comes to Gazzetta ratings so with Mertens being the highest rated one with a 7 due to his two goals his inclusion makes the most sense.

D. Kulusevski RW – Spurs - 81 -> 84 Rated: Tottenham put in an excellent performance to see off Leicester City 3-1 at home on Sunday and got their hopes back on track for finishin on a UCL spot. Son scored twice and assisted another but with him being in the TOTS this friday the next offensive option would be Kulusevski who got subbed on for Moura and earned both assists for Son's brace.

Rodrygo RW – Real Madrid - 79 -> 84 Rated: Real Madrid's dominant 2021/22 La Liga campaign has finally yielded the dividends, with Los Blancos clinching the title after a comfortable 4-0 win over Espanyol on Saturday evening. Rodrygo has endured a stop-start 2021/22 campaign, but he set the record straight and showed that he has a lot to offer amid widespread speculation linking Real Madrid with Mbappe. The Brazilian international linked up superbly with Marcelo, who found him for the opener. He then showed superb awareness to pounce on Mariano's brilliant pressing before netting the second.

A. Belotti ST – Torino - 81 -> 84 Rated: Torino recorded a convincing 3-1 victory away at Empoli on Sunday afternoon which was all but easy. It took Torino until the 78th minute to score and it was Belotti who broke the deadlook from the penalty spot just seven minutes after he got subbed on. He added a second via penalty 3 minutes before the final whistle and then completed his hat-trick in injury-time.

J. Alvarez ST – River Plate - 84 -> 86 Rated: Manchester City's new signing Julian Alvarez keeps scoring in the Liga Profesional for River Plate. His side recorded a trashing 7-0 victory over Sarmiento and Alvarez found the net three times whilst also assisting another. If he can quickly adapt to the football in the Premier League when joining Man City, he'll become a bargain.

Audero GK – Sampdoria - 78 -> 82 Rated: Goalkeepers have been a bit easier to select this week even though there wasn't a big standout performer apart fro Pickford. My second goalkeeper choice is Sampdoria's Audero who just made a total of 4 saves during the game but most important, saved a penalty in the 95th minute of the game to make sure his side got all three points.

R. Holding CB – Arsenal - 77 -> 81 Rated: Arsenal were able to reclaim fourth place after scraping to a 2-1 win over West Ham United even though they lacked their regular fluid football and the London Stadium. Holding scored his first-ever Premier League goal and put in a masterclass at the back as Arsenal dug deep and secured all three points.

L. Geertruida RB – Feyenoord - 76 -> 81 Rated: With Eredivisie Team of the Season being in packs at the moment we could see another defender join the side in TOTW this week. Feyenoord recorded a 3-1 win over Fortuna Sittard and with Geertruida scoring twice he should be a safe inclusion.

D. Klaassen CAM– Ajax - 79 -> 82 Rated: Ajax Amsterdam has moved a step closer to sealing the Eredivisie title after a comfortable 3-0 win over PEC Zwolle on Saturday evening. Davy Klaassen was the unusual hero that day, scoring twice from the CAM position and should make it this week.

M. Uth CAM – 1. FC Köln - 75 -> 81 Rated: Anthony Modeste scored twice as Cologne leapfrogged Union Berlin into the sixth and final European place witha 4-1 victory over Augsburg at the WWK Arena. After he got ignored last week I'm once again predicting Mark Uth to pick up the inform after a goal and an assist and MOTM by Kicker.

McConville LM – Accrington - 75 -> 81 Rated: This is a bit of a risky inclusion with EFL Team of the Season coming this week and McConville could easily be in. Accrington recorded a 4-3 win against AFC Wimbledon and with McConville assisting three of the goals and already being 75 rated I'm gonna risk it and predict his SIF.

V. Barisha ST – Viking FK - 78 -> 82 Rated: There haven't been that much hat-tricks this week and especially gold strikers have been short on goals too but one who should not miss out is Veton Berisha after he scored three times in his side's 5-1 win over Haugesund.

M. Riemann GK – VfL Bochum - 74 -> 80 Rated: In a remarkable derby, Bochum first took a 2-0 lead before Dortmund went 3-2 ahead thanks to Haaland's hat-trick, but the visitors wouldn't be denied as they claimed a famous 4-3 win away to seal another year of top-flight football. Riemann once again was their best player and denied Dortmund a couple of times in front of his goal, finishing the game with a total of 7 seven and picked up MOTM and a 1.5 match rating from Kicker.

V. Morar CAM – D. Bucuresti - 63 -> 73 Rated: Dinamo Bucuresti secured a much needed 5-1 win over Academica Clinceni in their relegation round fixture on the weekend and Vlad Morar scored three of the goals from the CAM position.

R. Alm RM – IF Elfsborg - 65 -> 75 Rated: Another inform is expected to come from the Swedish Allsvenskan in the name of Rasmus Alm. Elfsborg recorded a comfortable 6-0 win against Degefors and Alm scored three of the goals and assisted another.

Lee Gregory ST – Sheffield Wed - 67 -> 76 Rated: A crucial 3-2 win midweek against relegation-threatened Fleetwood fired Sheffield Wednesday back into the League One play-off zone and Lee Gregory was the hero after he scored an incredible hat-trick for his side to seal all three points.

S. Surridge ST – Nott'm Forest - 67 -> 76 Rated: The Championship promotion race is heating up with only one matchday left for most of the teams and Nottingham Forest recorded a very important 5-1 victory over Swansea with two games left to play now and a 3 point gap to second placed Bournemouth. Sam Surridge was the hero that day after he scored three of the goals and kept his side's hopes of a direct promotion alive.