FIFA22 Team of the Week 32 Prediction 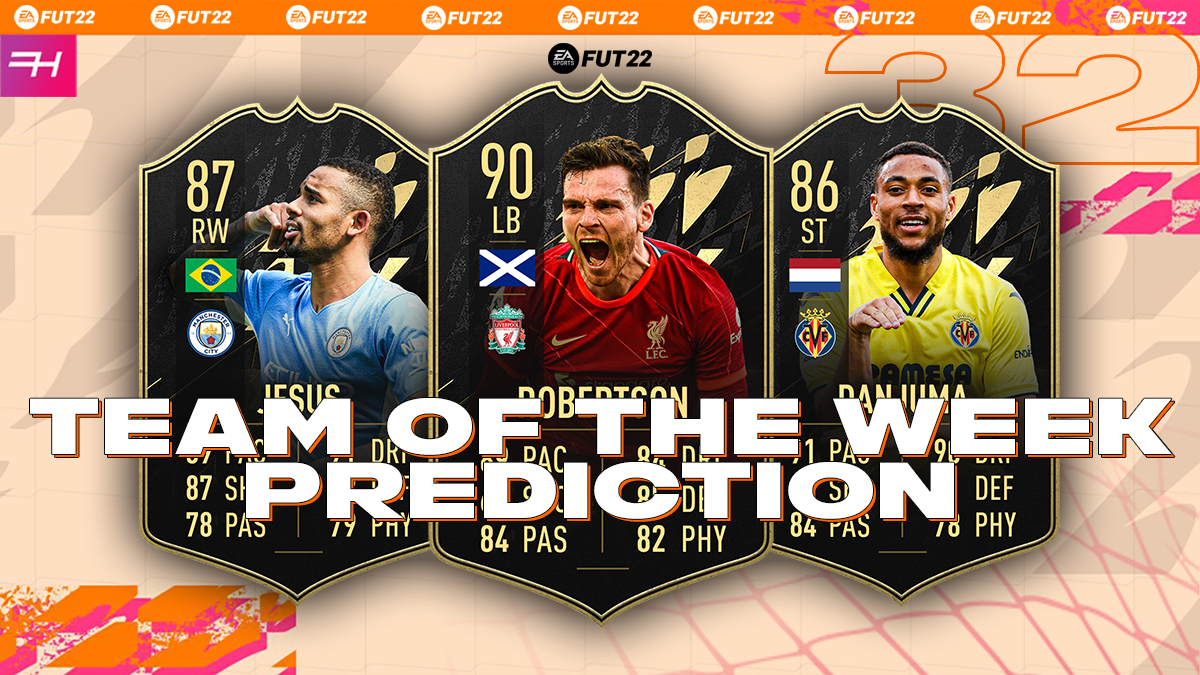 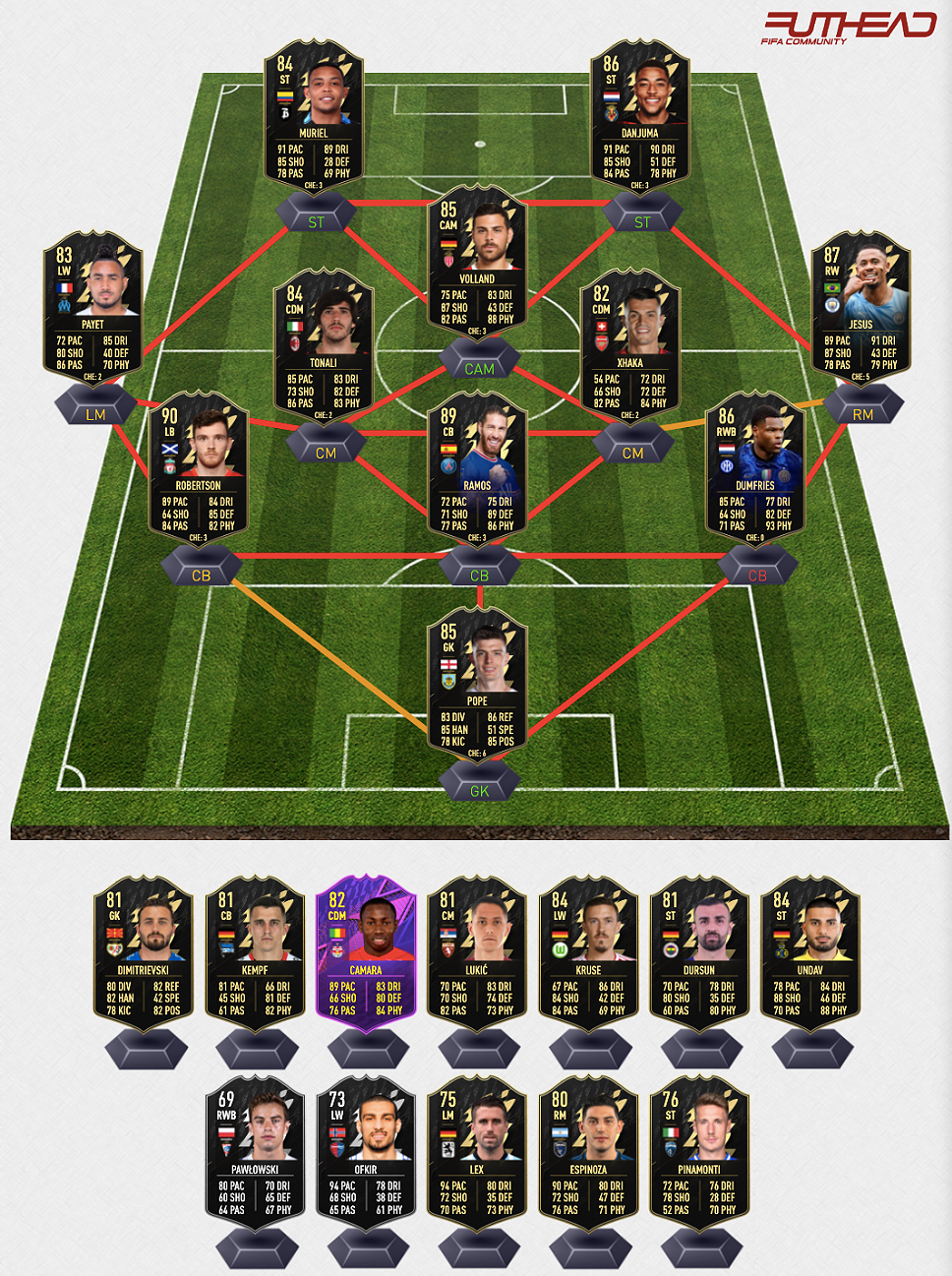 N. Pope GK – Burnley - 83 -> 85 Rated: Goalkeepers have been hard to pick this week and for my starting GK I've decided to include Nick Pope. Burnley had two fixtures last week and won both, moving themselves out of the relegation zone with two wins against Southampton and Wolves. Pope kept clean sheets in both games but was named MOTM for his game against Wolves where he managed to make a total of 4 saves to deny Wolves a goal.

A. Robertson LB – Liverpool - 89 -> 90 Rated: I'm 100% sure we will see at least one player from Liverpool this week but maybe also a second one as Liverpool recorded wins against Manchester United and Everton. With TOTS around the corner tho don't think Salah will make it so I fully expect Robertson to be featured. He was magnificent against United midweek and had another big performance against Everton as he headed home the opener against their rivals.

S. Ramos CB – Paris SG - 88 -> 89 Rated: Paris SG secured the league title on the weekend with a draw against RC Lens but an inform could come from their midweek fixture against Angers. PSG recorded a comfortable 3-0 victory over Angers on Wednesday, Marquinhos and Ramos both managed to score, but with TOTS around the corner I rather expect Ramos to pick up the inform after he also made it into L'Equipe's TOTW.

D. Dumfries RWB – Inter - 84 -> 86 Rated*: Inter took a convincing and impressive win by defeating Jose Mourinho's AS Roma 3-1 in the Serie A at the Stadio Giusepe Meazza, keeping pace with AC Milan who also won their game against Lazio. Dumfries played almost as an attacker for most of the first half, being rewarded with a goal, and came close to score once again. Him, Calhanoglu and Brozovich all picked up a 7.5 match rating from Gazzetta but I went with the Dutchman due to the lack of higher rated defender options.

K. Volland CAM – AS Monaco - 83 -> 85 Rated: AS Monaco recorded a convincing and comfortable 4-1 victory against Saint-Etienne, putting themselves in the race for the UCL qualification spot level on points with Rennais. There are a few strong contenders for an inform from that game and I've opted for the German attacker Volland who scored one from the CAM position and picked up an 8 from L'Equipe.

G. Xhaka CDM – Arsenal - 79 -> 82 Rated: Arsenal got the better of Manchester United in a win that all but ends the Red Devils' hopes of making the top four this season. Xhaka maintained some level of control and when Arsenal were truly on the ropes and looking destined to concede the equaliser, he stepped up with a stunning goal – his first this season and probably his most important.

Tonali CDM – Milan - 81 -> 84 Rated: The Serie A title race took another twist on Sunday night when AC Milan came from behind to defeat Lazio 2-1 to move back to the top of the Serie A standings. Tonali worked extremely hard throughout the clash and was an important presence for Milan, bar a few misplaced passes. The goal he scored at the end could prove to be a crucial one for the Rosseoneri, and that makes all the difference.

D. Payet LW – OM - 80 -> 83 Rated: I already said it earlier, Ligue 1 had two matchdays last week and Marseille managed to win both of their fixtures to maintain second behind Paris. Payet was the difference-maker in Marseille's midweek win against Nantes where he scored twice and even though both have been from the penalty spot I think he has a chance to pick up his first inform.

G. Jesus RW – Manchester City - 86 -> 87 Rated: The title race in the Premier League is heating up more and more every week with Manchester City and Liverpool walking side by side at the top of the table. Manchester City did what they had to and cruised to a 5-1 victory over Watford on Saturday. Amid mounting speculation surrounding his future, Jesus maintained his focus on the affairs on the pitch. The Brazilian international was the oustanding player that day, ending the match with 4 goals and an assist to his name.

A. Danjuma ST – Villareal CF - 84 -> 86 Rated: Villareal CF made it back to back wins in La Liga with a 2-0 win over Valencia midweek and kept their slim hopes of a top 5 finish alive. With no La Liga fixtures on the weekend, apart from two, I expect midweek fixtures to be included and one of the two options from that game is Danjuma who scored both goals, one from the penalty spot in the derby between both sides.

Muriel ST – Bergamo Calcio - 82 -> 84 Rated: Atalanta kept their slim hopes of international football for next season alive with a comfortable -31 victory over Venezia, sitting 4 points behind fifth placed AS Roma with a game in hand. Muriel could pick up his first inform this Fifa, which is crazy considering the amount of goals he scored, after he scored one and assisted another for his side and picked up an 8 match rating and POTW from Gazzetta.

Dimitrievski GK – Rayo Vallecano - 75 -> 81 Rated: Barcelona fell to a shock 1-0 defeat at home to Rayo Vallecano in La Liga, their third straight defeat at Camp Nou in all competitions. Rayo Vallecano scored the only goal of the game in the seventh minute of the game and despite the pressure from the home side, Rayo managed to maintain their clean sheet which was also thanks to their shot-stopper Dimitrievski who made a total of 4 saves.

Kempf CB – Hertha Berlin - 76 -> 81 Rated: Davie Selke and Belfodil scored the goals as Hertha Berlin moved four points clear of the drop zone with a crucial win in their relegation six-pointer against VfB Stuttgart. Former Stuttgart defender Kempf was a rock at the back for his side, saving his side a couple of times and picked up MOTM from Kicker.

M. Camara CDM – RB Salzburg - 79 -> 82 Rated: Leagues are slowly coming to the end and decisions are made sooner than later. One of these decisions have been made on Sunday afternoon in Austria where RB Salzburg secured the league title with a 5-0 victory at home against Austria. We often saw players from the title winning side being rewarded with a special card in the past and thus I'm going to take the punt on Camara who scored and assisted one.

Lukic CM– Torino - 75 -> 81 Rated: Definetly not the best card could come from Torino this week in the name of Sasa Lukic. Torino picked up all three points with a narrow 2-1 win against Spezia and Lukic was the one who scored both goals, one coming from the penalty spot.

Max Kruse LW – VfL Wolfsburg - 81 -> 84 Rated: VfL Wolfsburg bounced back after their trashing 6-1 defeat last weekend to Dortmund with a similar result, beating Mainz 05 with 5-0 on Saturday afternoon. Max Kruse got his first Bundesliga hat-trick since November 2017 (for Werder Bremen against Hannover) and now has 12 Bundesliga goals for the Wolves, meaning he's got double figures for five different clubs.

S. Dursun ST – Fenerbahce - 75 -> 81 Rated: Fenerbahce extended their win streak in the Turkish Süper Lig to now 7 wins in a row with a trashing 6-0 win away at Rizespor. Former Darmstadt 98 attacke Dursun, who joined the club last summer, scored three of the goals and assisted another and even though two of the goals came from the penalty spot he should make it into the side.

D. Undav ST – Union SG - 81 -> 84 Rated: Usually Deniz Undav is the one who scores the goals for Union but not this time. Union SG recorded a convincing 3-1 win over Anderlecht in their first Championship playoff game on the weekend and Undav managed to bag a hat-trick, but this time a hat-trick of assists.

D. Pawlowski RWB – Gornik Zabrze - 59 -> 69 Rated: With the title race in the Polish Ekstraklasa being very close with just 3 games left we could expect an inform soon from the top teams but one who could come this week is from middle table side Gornik Zabzre in the name of Pawlowski who scored one and assisted another two in his side's 4-2 win against Zaglebie.

M. Ofkir RW – Sandefjord - 63 -> 73 Rated: There haven't been as much hat-tricks as previous week from silvers, one who still managed to score three times wasSandefjord's Mohamed Ofkir in his side's trashing 5-0 against Stromsgodset.

Stefan Lex LM – 1860 München - 66 -> 75 Rated: Although Magdeburg secured promotion last weekend in Bundesliga 3 I expect a player from 1860 München to make it into the side this week. Duisburg have been looking to secure another year of Bundesliga 3 football with a win but 1860 completely destroyed them with a 6-0. Stefan Lex was the ouststanding player with scoring one and assisting another 4 goals and was named POTW by Kicker.

Pinamonti ST – Empoli - 68 -> 76 Rated: Napoli was looking the safe winner against Empoli on Sunday, leading 2-0 with just 10 minutes left to play but shockingly managed to gave away all three points and lose 2-3. Andre Pinamonti was the decisive player for Empoli as he scored twice, including the winning goal with just 3 minutes left to play.

Espinoza RM – SJ Earthquakes - 74 -> 80 Rated: Another hat-trick and it's coming fromt the Major League Soccer. San Jose Earthquakes recorded their first win in 8 matches with a narrow 4-3 win over Seattle and the Argentinian winger Espinoza scored three of the four goals, one coming from the penalty spot.