FIFA22 Team of the Week 17 Prediction

Published on by Simpleblue 6 Comments Updated on 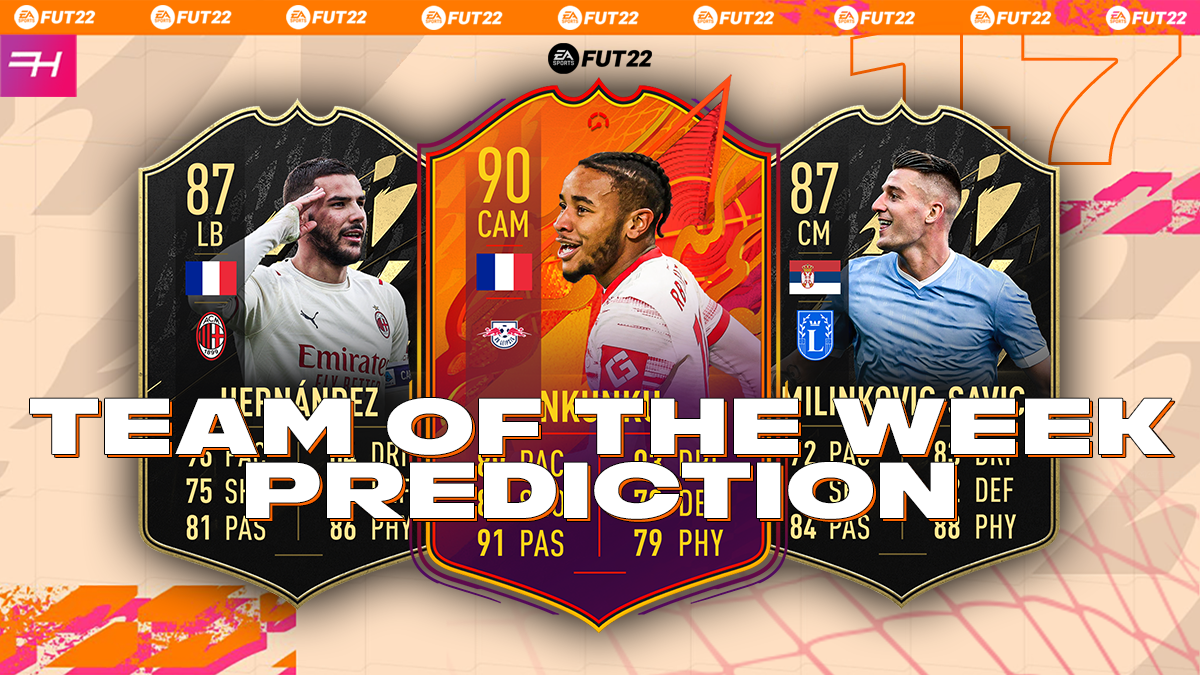 This week's TOTW is going to be very interesting and I'll explain why. First of all, a player who should miss out on an Inform is Benzema due to his inclusion in TOTW 15 but speaking about Real Madrid, it's possible Vinicius Headliner could get upgraded even though he's currently in packs, it happened before that a Headliner got upgraded while being in Packs (Ilicic in the past for example). Speaking about Headliners, there are 4 players who could get an upgrade this week but I do not expect everyone of them to be in TOTW, we maybe could see 2 or 3 being featured this week. 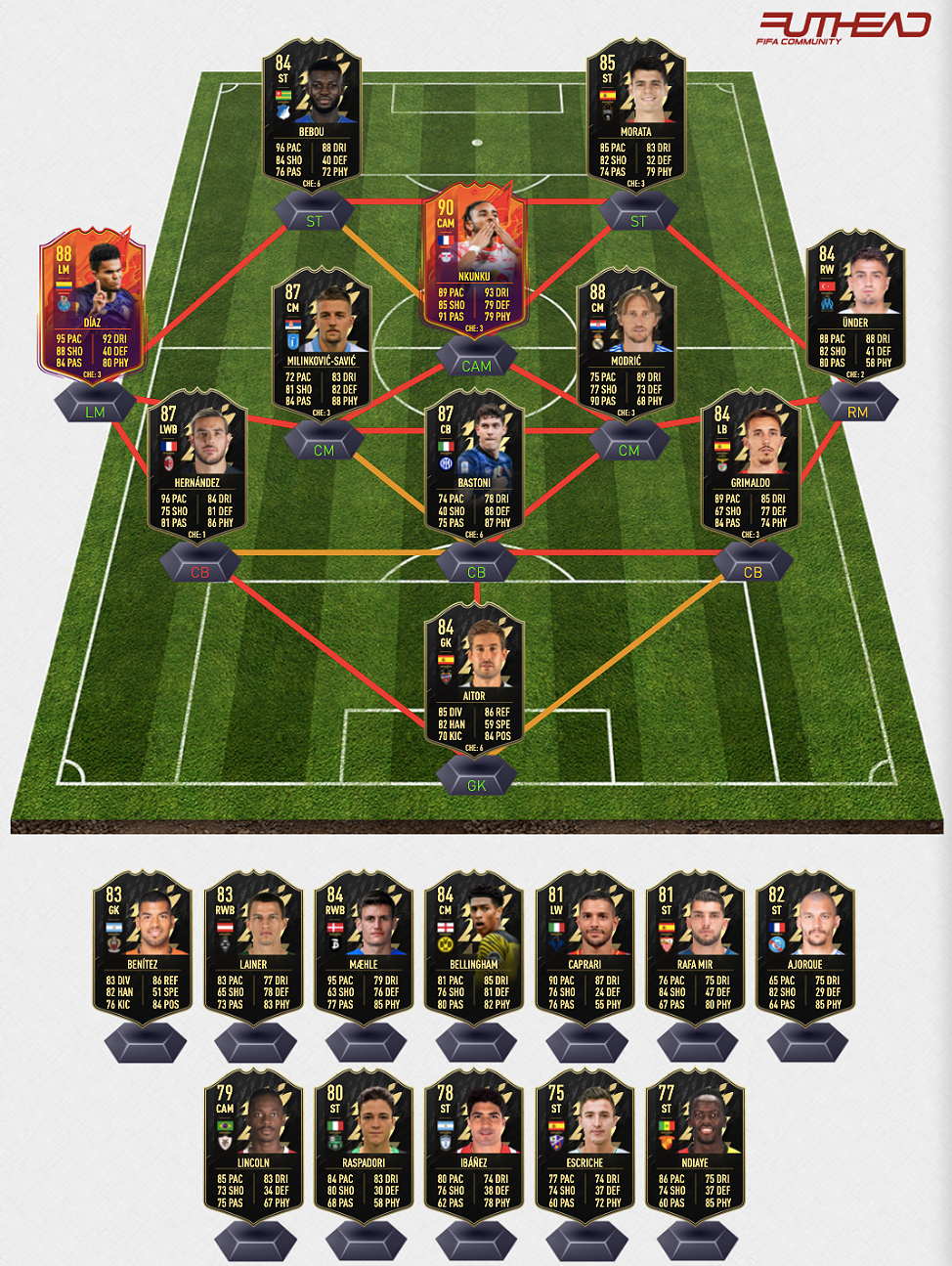 Aitor GK – Levante UD - 81 -> 84 Rated: We're starting the prediction with the first goalkeeper this week and I honestly would be shocked if he isn't in. UD Levante took all three points with a 2-0 win against RCD Mallorca and Aitor was insane for his side, finishing the game with a total of eight saves.

T. Hernández LB – AC Milan - 86 -> 87 Rated: AC Milan managed to beat Venezia by three goals to nil on Sunday afternoon and just like against Roma midweek, Theo Hernandez was one of the key players. He was in rampant mood against Venezia. The Frenchman drove forward at will down the left flank, with his combination play with Leao being a key aspect of Milan's attacking play. Forced a save from Romero in the first half and then found the back of the net twice in the space of ten minutes in the second period to put the game to bed. This and an 8 match rating from Gazzetta should definetly be enough for him.

A. Bastoni CB – Inter Milan - 86 -> 87 Rated: Inter moved back to the top of Serie A with a hard-fought 2-1 win at home to Lazio on Sunday night in their opening match of 2022 after their midweek meeting with Bologna got abandoned. After a long series of good displays, the 22-year-old defender got the reward he deserved, finding his first goal of the season in a delicate phase of the game, as well as assisting his side's second goal of the night. Had Felipe Anderson firmly in his pocket at the end of an impressive evening.

*Grimaldo LB – SL Benfica - 82 -> 84 Rated: Defenders have been overperforming this week in terms of availability and besides Hernandez and Bastoni the third one could be chosen from 3-4 players. I'm going with Benfica's Grimaldo after he scored one goal in his side's 2-0 win against Pacos de Ferreira.

Milinkovic-Savic CM – Latium - 86 -> 87 Rated: Lazio Roma drew 3-3 against Empoli at the Stadio Olimpico in the first Serie A round of the 2022 on Thursday afternoon. Midfielder Milinkovic-Savic was the star of the show and ended the game with 2 goals and an assist and even though it was a draw he might pick up another special card after Gazzetta awarded him with an 8 match rating.

Modric CM – Real Madrid - 87 -> 88 Rated: Okay, this is going to be very interesting. After losing to Getafe last weekend, Real bounced back against Valencia with another thoroughly dominating performance as they defeated the visiting Bats 4-1. Vinicus was one of the two matchwinner but with his Headliner just being out of packs I'm not sure if he'll get upgraded that soon so I'm instead taking the punt on Modric who was all over the pitch, majestically controlling the midfield with his accurate and progressing passing. He recorded three key passed to tie Mendy and Kroos for the team lead, and he was unlucky not to have scored as his shot smacked the crossbar.

L. Diaz LM – Porto - 87 -> 88 Rated: FC Porto now remains the only unbeaten team in Liga NOS but they had to work hard. They've been down 0-2 before half-time and it looked like Estoril would take all three points until Luis Diaz once again showed why so many top clubs are interested in signing him. He first scored the all-important equaliser 6 minutes before the final whistle and then setted up Conceica for the game-winning goal. He also has a Headliner card which could go against him but he got denied his SIF numerous times in the past week and I think it's finally time for him getting rewareded.

C. Ünder RW – Marseille - 77 -> 84 Rated: If at first you don't succeed, try again. This could well have been the mantra of Marseille after more unsuccessful trips to Bordeaux than they would care to mention but on Friday night Sampaoli did waht more than 50 of his predecessors could not – take three points at the home of Les Girondins. It was Cengiz Ünder's first-half goal which was enough to beat Bordeaux and ended a 44-year wait for a victory at the home of Petkovic's strugglers.

Morata ST – Piemonte Calcio - 83 -> 85 Rated: Okay, Juventus is an interesting one this week. They played Napoli midweek which ended in a 1-1 draw and won 4-3 on Sunday against Roma in what will probably be one of the most entertaining games of the season. There wasn't a standout player and thus this absolutely is a punt but I'm going with Morata who got an assist against Roma. Yeah, an assist for a Starting XI striker is a big stretch but with a 7.5 from Gazzetta he's an option.

Nkunku ST – RB Leipzig - 89 -> 90 Rated: RB Leipzig began 2022 on the back of their worst start to a Bundesliga season, but controlled proceedings for long periods at the Red Bull Arena and ended the day with a 4-1 win against Mainz 05. It might be too soon for another inform and his recent Headliner card could also go against him but I simply can't ignore Nkunku after one goal and two assist in just 45 minutes and being named POTW.

Bebou ST – TSG Hoffenheim - 81 -> 84 Rated: 1899 Hoffenheim came from behind to beat Augsburg on Ricardo Pepi's Bundesliga debut with 3-1. Forward Ilias Bebou was the driving force for his side, scoring two of the three goals and is now Hoffenheim's seven-goal top scorer.

Benitez GK – OGC Nice - 80 -> 83 Rated: OGC Nice played 70 minutes with just 10 men against Stade Brestois 29 on Sunday, but that didn't stop them from picking up a brilliant 3-0 win. Dolberg, Delort and Gouiri may have got their goals, but Nice could well have been dead and buried here if not for their goalkeeper. Benitez boasts the second-highest save percentage in the divison, and with his team shorthanded he had to make 10 saves here on the way to his seventh clean sheet of the season.

Lainer RWB – Gladbach - 80 -> 83 Rated: Borussia Mönchengladbach once again underlined their reputation as Bayern Munich's bogey team after coming from behind to win 2-1 in the Matchday 18 opener on Friday, their sixth win in their last 11 meetings with the record German champions. Defender Lainer was Gladbach's best player on the pitch, managed to score the game-winning goal and picked up a 2 match rating and MOTM from Kicker.

Maehle RWB – Bergamo Calcio - 81 -> 84 Rated: Serie A was quite entertaining on the weekend with some high scoring games, one of the was between Udinese and Atalanta. Atalanta managed to grab all three points with a 6-2 and usually Muriel would be the obvious choice after two goals but with him being rumored to get a Showdown SBC this week the next best option is Maehle who scored one and assisted another.

Bellingham CM– Borussia Dortmund - 82 -> 84 Rated: Borussia Dortmund left it late to secure an extraordinary 3-2 comeback win over Eintracht Frankfurt on Saturday and bridged the gap at the top to six points. Bellingham delivered another energetic and hard working performance for his side and although it wasn't Dortmund's best game at all he was always looking to make things happen. He also scored the equaliser in the 87th minute with a well placed header and picked up a 2 match rating from Kicker.

Caprari LW – Hellas Verona - 75 -> 81 Rated: With two (more like one and a half) matchdays from Serie A this week there are a few more players available which helps a lot, especially with no Premier League action. One of the players from midweek who could get in is Verona's Caprari after he scored both goals in their 2-1 win over Spezia.

Rafa Mir ST – Sevilla FC - 77 -> 81 Rated: Not only was it hard to pick strikers for the Starting XI, finding more than one gold striker for the subs was hard too. One of the very few who managed to score was Sevilla's Rafa Mir in his side's narrow 1-0 win against Getafe which took Sevilla to now 2 wins already, 2 more to go for Headliner Acuna owners.

Ajorque ST – Strasbourg - 78 -> 82 Rated: Strasbourg went back on winning ways on Sunday with a comfortable 2-0 victory away against Metz FC. Ajorque once again showed his worth for his team, ending the game with a goal and an assist and should be in after he got an 8 match rating from L'Equipe.

Lincoln CAM – Santa Clara - 73 -> 79 Rated: Santa Clara recorded much-needed three points in their battle against relegation and surprisingly it came against Sporting CP, ending in a 3-2 for the home side. Lincoln got himself a goal and an assist in that game and could be set for an inform, one which would be pretty pointless due to his season objective card but definetly a deserved one.

Raspadori ST – Sassuolo - 74 -> 80 Rated: An inform from Sassuolo is pretty much guaranteed this week after their 5-1 win agains Empoli and you will probably see Berardi most of the times in other predictions but I'm instead going with Raspadori who scored twice and was named Gazzetta's MOTM after he picked up an 8 match rating.

N. Ibanez ST – Pachuca - 71 -> 78 Rated: I said it a bit earlier, reserves are really hard to pick this week with no hat-tricks and thus I'm going with Nicolas Ibanez who scored both goals in Pachuca's 2-0 win ove San Luis.

Escriche ST – SD Huesca - 66 -> 75 Rated: Usually silvers are the easier part of the prediction but there are very few weeks where it's the opposite and this week is one. With only one hat-trick we need to look elsewhere and one who could get in is Escriche after he scored two goals and assisted another in Huesca's 3-0 win against Cartagena.

Ndiaye ST – Göztepe - 69 -> 77 Rated: The only player this week in total with a hat-trick and he's coming from Goztepe. Ndiaye scored all three goals for his side in their 4-0 victory over Antalyaspor and should be a guaranteed inform this week.