FIFA22 Team of the Week 16 Prediction

Published on by Simpleblue 13 Comments 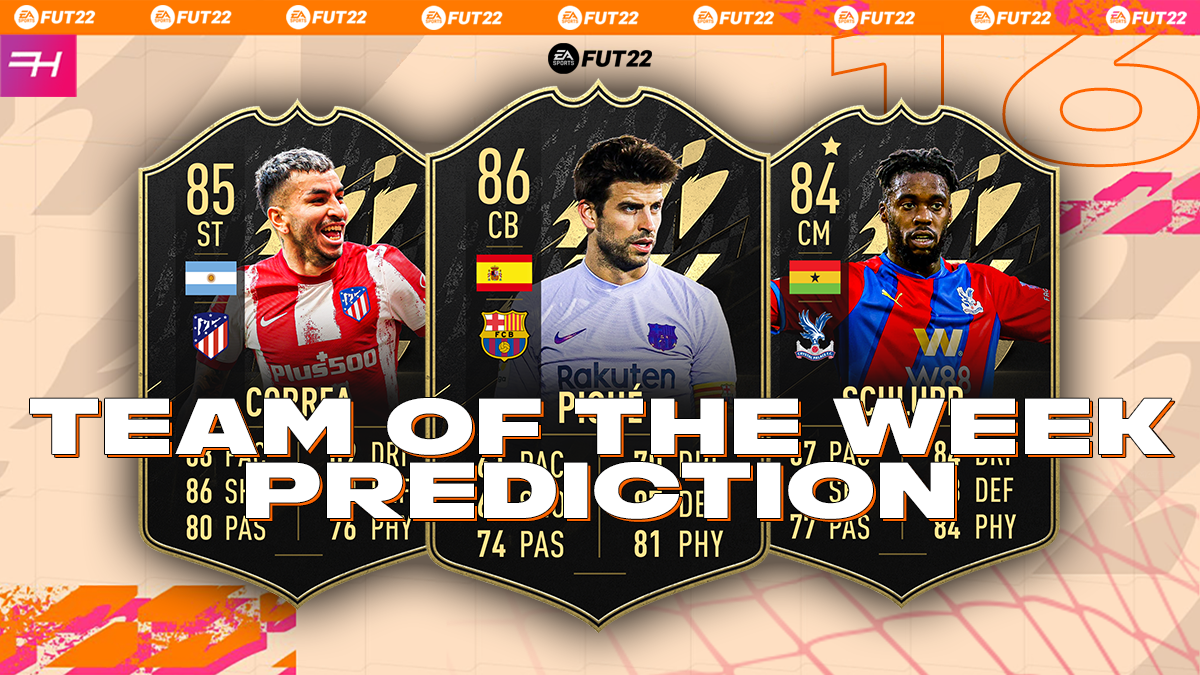 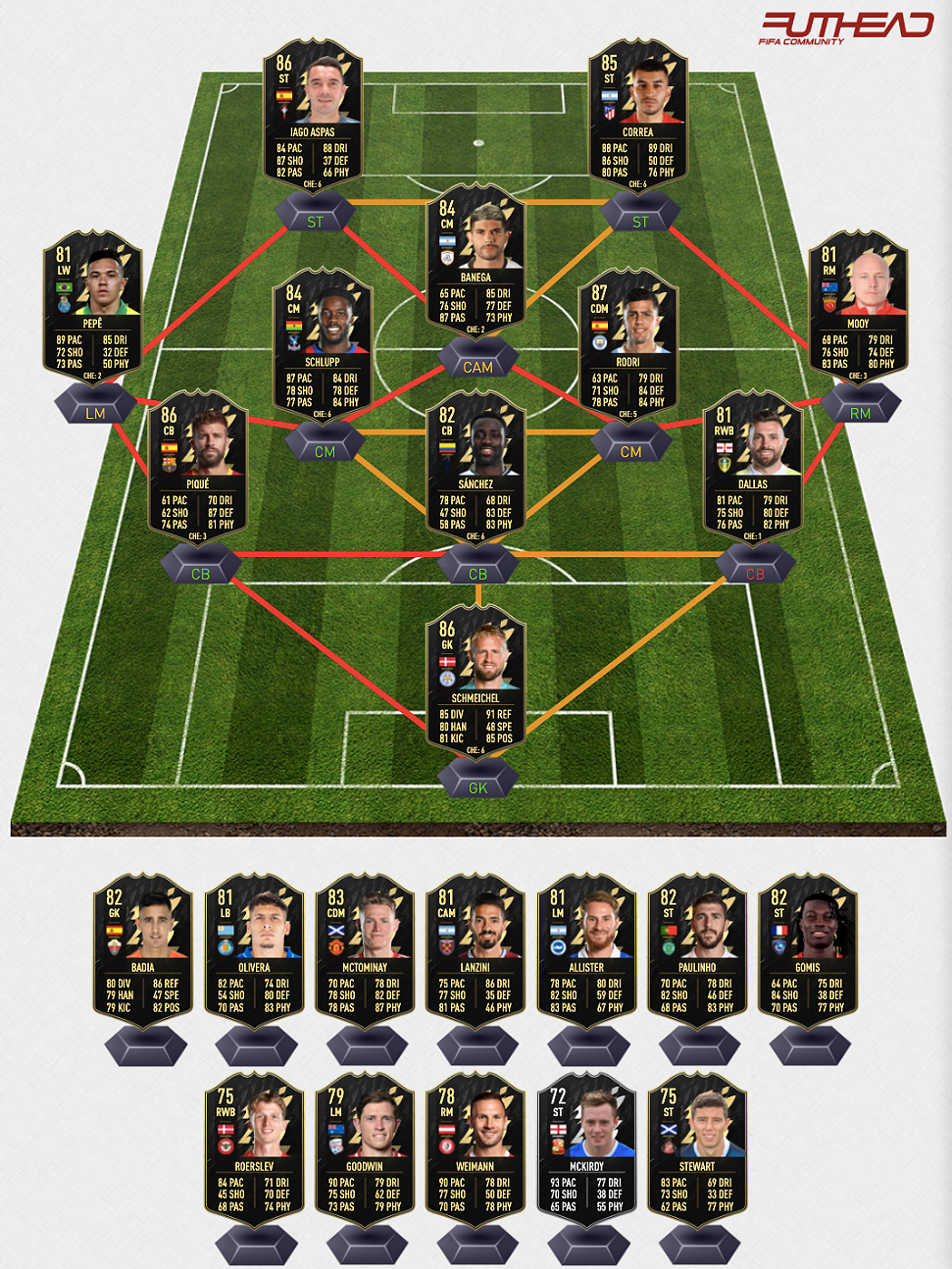 Schmeichel GK – Leicester City - 85 -> 86 Rated: Liverpool's title aspirations were dealt a blow following a shock 1-0 loss to Leicester City in the Premier League on Tuesday last week. The Leicester City captain pulled off a fine stop to prevent Salah from scoring from the penalty spot early in the game. Schmeichel then produced another top save to deny the Egyptian. He looked in control in his are, keeping his third clean sheet of the season in the process and his magnificent game was rewarded with a 9 match rating and MOTM.

Sanchez CB – Spurs - 79 -> 82 Rated: Tottenham Hotspur kickstarted their 2022 in a positive manner, securing a 1-0 win over Watford. The three points helped them close the gap to fourth-placed Arsenal to just two points. It was yet another impressive display Davinson Sanchez. He barely looked troubled when Watford did push men forward on the counter. His thumping header late on in the proceedings won the game for Spurs and he could pick up his first-ever inform for Spurs despite the fact he had a OTW a whole year back in the past.

Pique CB – FC Barcelona - 84 -> 86 Rated: A much-weakened Barcelona secured an important 1-0 win over RCD Mallorca on Sunday night thanks to a first-half header from Luuk de Jong. The veteran defender led the team by example, being forceful in the air and strong on the ground. He ended the game with seven aerial duels win, two interceptions, five clearances and one tackle and could find his way into TOTW even though the inform would be pretty useless due to his Showdown card.

*Dallas RWB – Leeds United - 75 -> 81 Rated: Leeds United eased their relegation fears with a well-earned 3-1 win at home to Burnley on Sunday and Bielsa's side moved eight points clear of the Clarets in 18th after rallying late on to secure the three points. Stuart Dallas made life difficult for the opposition defences with his marauding runs on the far side, coupled with his ability to combine well with attackers in the final third. He was the driving force behind most of Leeds' attacking moments, with the defender notably capping of his 250th appearance for the club by scoring a stunning winner late in the game.

Banega CM – Al Shabab - 82 -> 84 Rated: Another player from the MBS Pro League who could feature in TOTW on Wednesday is the Argentine midfielder Ever Banega and that is after he scored and assisted one in Al-Shabab's 4-3 thriller against Al-Ahli.

Schlupp CM – Crystal Palace - 75 -> 84 Rated: A first-half blitzkrieg from Crystal Palace ensured that they defeated bottom-placed Norwich City to end 2021 on a high after they blew them away in a sensational performance at Selhurst Park midweek. Schlupp kept Gilmour silent and was another player who looked assured in the middle of the park. He rounded off a fine first-half performance by the hosts when he smalled home a strike right before the half-time to make it 3-0.

Pepe LM – Porto - 77 -> 81 Rated: We're nearly halfway through the season in Liga NOS but it's already looking like the title race is between Porto and Sporting CP. Porto re-claimed the lead in the standings thanks to their better goal difference and thanks to a 3-1 win at home against Benfica. Aquino started on the LM position after the usual starter Luis Diaz was out due to Covid and took his chance well, finishing the game with a goal which was the all-important second for his side.

Mooy RM – Shanghai Port - 77 -> 81 Rated: One of two Australian players who could feature in this weeks TOTW is Aaron Mooy. Shanghai Port secured all three points in their Championship Round fixture with a 2-1 win against second placed Guangzhou and Mooy scored both of his side's goals. With him being gold he could pick up an inform on Wednesday.

Aspas ST – RC Celta - 86 -> 87 Rated: Celta Vigo made it 3 win in consecutive La Liga matches with a 2-0 win away at Real Betis thanks to two goals from Iago Aspas who thus looks set to pick up his second inform on Wednesday.

Correa ST – Atletico de Madrid - 83 -> 85 Rated: Atletico Madrid snapped a four-game losing streak in La Liga at the expense of Rayo Vallecano and the win sees Atletico leapfrog their opponents into the fourth Champions League qualification berth. Correa's first goal came in the 28th minute, when the Argentine picked up the rebound from a Hermoso blocked shot and slotted the ball past Zidane. He then doubled the lead in the 53rd minute, sprinting into the box with a perfect timed run and tapped home Lodi's low cross.

Badia GK – Elche CF - 79 -> 82 Rated: You will see Soria a lot as the second goalkeeper this week but with another one being available fro La Liga I'm instead picking him. Relegation-battling side Elche picked up a point at home against Granada but they have been down to ten men for more of 45 minutes and Edgar Badia was one of the reason his side kept the clean sheet with a total of 5 saves.

M. Oliveira LB – Getafe CF - 76 -> 81 Rated: Real Madrid have had a couple of stinkers in the 2021-2022 season despite their overall brilliance, but this performance on Sunday night was one of their worst one yet. Getafe managed to grab all three points with an emphatic defensive performance and although you might see Soria in a lot of predictions I'm instead going with left-back Oliveira due to the lack of defenders. The Uruguayan did an inredible job defending Real's attackers and with him being the only gold defender without an inform yet and with receiving a 3/3 match rating I'm picking him.

McTominay CDM – Manchester Utd. - 80 -> 83 Rated: Coming into the game on the back of a disappointing 1-1 draw against Newcastle, Manchester United extended their unbeaten run under Ralf Rangnick to five matches with a comfortable victory over Premier League strugglers Burnley. McTominay got the ball rolling for his side on the night with a stunning strike from just outside the penalty box to make it 1-0, scoring his first goal of the season. He also made the third goal happen as it was his strike that was parried onto the post by Hennessey, allowing Ronaldo to score the rebound. Claimed an 8 match rating and MOTM and might pick up the inform on Wednesday.

Lanzini CAM– West Ham - 77 -> 81 Rated: West Ham moved to within a point of the Premier League's top four with a 3-2 win at Crystal Palace on New Year's Day, although they survived a late scare at Selhurst Park. The Argentine international was the difference-maker on the night and took his two clear cut opportunities well. Lanzini showed deft touches to take out Joachim Andersen, Guehi and Guaita before scoring his sensational first goal. Appers to be coming into form at just the right moment and picked up an 8 match rating and MOTM for his performance.

Allister LM – Brighton - 75 -> 81 Rated: Brighton & Hove edged a thriller at Everton on Sunday afternoon in front of a hostile Goodison Park crowd to secure a 3-2 victory and move up to eighth in the Premier League. A battling display in midfield and then two beautifully taken goals. Ghosted into the box to score his first goal but his second was even better, sending a swerving effort from range beyond the sprawling Pickford.

Gomis ST – Al Hilal - 79 -> 82 Rated: After I've inlcuded Aboubakar last week for one goal and one assist and he wasn't included I'm once again including a MBS Pro League player. This time it's Bafetimbi Gomis after he scored twice in Al-Hilal's narrow 3-2 win against Al-Faisaly.

Paulinho ST – Sporting CP - 79 -> 82 Rated: Sporting CP still remains unbeaten in the league this season and kept pace with league leaders Porto after their narrow 3-2 win at home against Portimonense. The 29-year old Portuguese forward Paulinho scored all three goals of the game and doubled his league tally, an inform for him should be secured.

Roerslev RWB – Brentford - 66 -> 75 Rated: Brentford leapfrogged Aston Villa in the Premier League table with a hard-fought 2-1 victory at home to Steven Gerrard's side on Sunday afternoon. Mads Roerslav was instrumental as the architect of Wissa's equaliser before becoming the 11th different scorer of a home goal for Brentford this season.

Goodwin LM – Adelaide United - 73 -> 79 Rated: The only game in the A-League which didn't got postponed could provide an inform on Wednesday. Adelaide United recorded important three points on Saturday as they beat Wellington Phoenix 4-0. Craig Goodwin got his feet in three of the goals, scoring two and assisting another.

Weimann RM – Bristol City - 70 -> 78 Rated: With no hat-tricks for reserves last week it was a bit more difficult to select the players but it seems to be easier this time. Weimann scored all three goals for his side in their 3-2 win against Millwall and should pick up an inform on Wednesday.

Stewart ST – Sunderland - 65 -> 75 Rated: Sunderland moved to the top of League One after a resounding 5-0 win over Sheffield Wednesday in a game which could have ended with double the amount of goals for the Black Cats. Left foot then right foot and then the header. And it wasn't just about the perfect hat-trick. His relentless running broke the Sheffield defence and constantly got his side up the pitch. Could have had 5 or 6 goals on that night but still ended 2021 on top of the League One goalscoring charts.

McKirdy ST – Swindon Town - 62 -> 72 Rated: Swindon Town got off to a sublime start in 2022 after trashing Northampton Town 5-2 in the EFL Sky Bet League Two at The Country Ground on New Year's Day. Harry McKirdy was the star of the shame this day as he scored four of the five goals for his side and should be a no-brainer for an inform.