FIFA22 Team of the Week 15 Prediction

Published on by Simpleblue 21 Comments 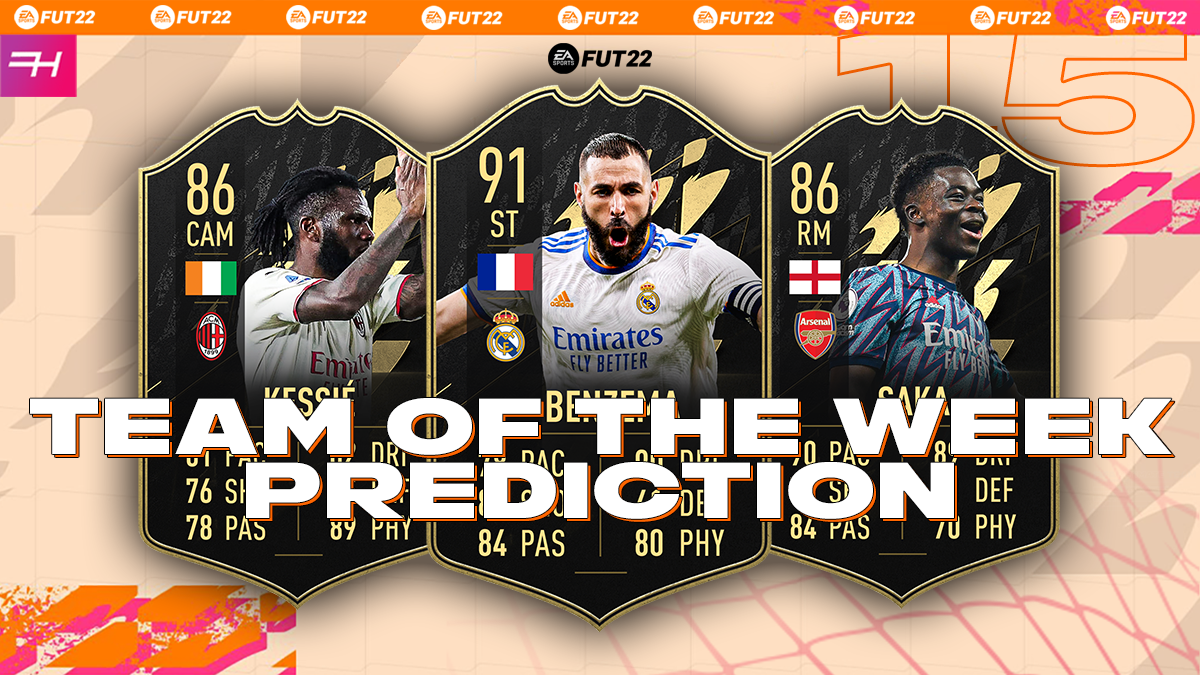 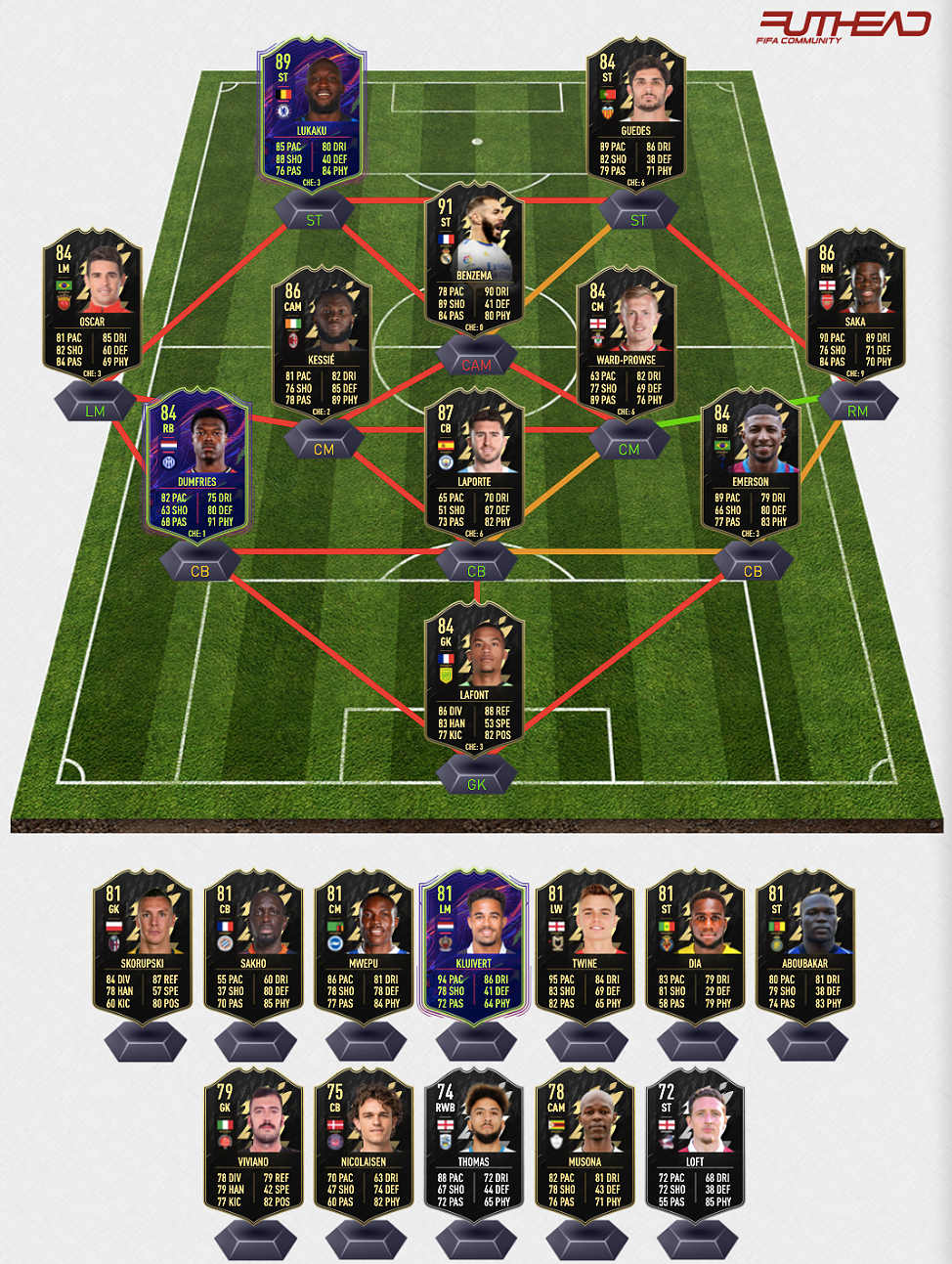 Lafont GK – Nantes FC - 82 -> 84 Rated: Options for gold goalkeepers are very rare this week and with no real standout performances I'm opting for Nantes' shot-stopper Lafont who made a total of 5 saves in his side narrow 1-0 win against Saint-Etienne. A 7 from L'Equipe and the inclusion in their TOTW could see him getting his seconf inform.

Dumfries RB – Inter - 82 -> 84 Rated: Inter Milan extended their winning run in domestic competitions to seven games after securing a 1-0 victory over Torino. Dumfries scored his third goal in four matches in this narrow win and aside from that, the former PSV ace remained solid defensively, offering support to Skriniar at every instance. A 7 from Gazzetta could be enough this week even though there are a few full-backs available to get in. If it's not him it could be Hakimi tho.

Laporte CB – Manchester City - 86 -> 87 Rated: Manchester City extended their advantage at the top of the Premier League to six points after an entertaining 6-3 victory over Leicester City on Boxing Day. De Bruyne, Sterling and Mahrez are all not eligable for an inform and thus I'm instead going with Laporte. He headed in a vital goal, which gave his side the breathtaking space making it 5-3. Overall he was fairly solid, barring an unfortunate slip for Maddison's goal but had his moment in attack when Tielemans hauled him down for Mahrez's converted first-half penalty.

*Emerson RB – Spurs - 79 -> 84 Rated: Tottenham Hotspurs maintained their excellent record under Antonio Conte by securing a comfortable 3-0 victory over Crystal Palace on Boxing Day which helped them move to fifth position in the premier League table, trailing fourth-placed Arsenal by six points but with three games in hand. It was an excellent display from Emerson, whose influence on the right flank was crucial to Tottenham's chance creation. The former Barcelona man impressed the onlookers with his link-up play whilst making marauding runs out wide. His crossing also looked strong, with the defender notably registering the assist for Lucas' goal in the first half.

Ward-Prowse CM – Southampton - 81 -> 84 Rated: West Ham's recent Premier League slump continued as they fell to a 3-2 home defeat to Southampton at the London Stadium on Boxing Day. It was a collective display but it was the heartbeat of Ward-Prowse whose second-half contributions ensured his side would not surrender another two late points. Converted the penalty calmly and delived the assist for Bednarek's winner which was impossible to defend.

Kessié CAM – AC Milan - 84 -> 86 Rated: Stefano Pioli's AC Milan side had a lot to play for when they travelled to Empoli in their final game of 2021 and Milan put in an excellent performance on the night and secured a much needed three points. Kessie scored two very important goals and certainly responded to the recent criticism he has received.

Oscar LM – Shanghai Port - 82 -> 84 Rated: Shanghai Port moved up to third in the 2021 Championship Round standings after their 3-1 win agains Shenzhen. Brazilian midfielder Oscar scored one and assisted another for his side and could find his way into the team, even though he would be a LM.

Saka RM – Arsenal - 85 -> 86 Rated: Arsenal made it five wins in a row by thumping Norwich 5-0 at Carrow Road on Boxing Day. Saka continued to wield his incluence on the pitch. He scored his first-ever brace for the club, and those goals put the game beyond Norwich's reach once and for all. It's a bit of a risk inlcuding Saka now as the gap between his first and second inform might not be enough but due to the lack of games being played I can see him getting in this time. If it's not Saka it could be Odegaard tho.

Guedes ST – Valencia CF - 81 -> 84 Rated: UD Levante continues to be an opponent who guarantees a spectacular game and loads of goals. This time it was against Valencia and even though they took the lead with two goals Valencia went home with a 4-3 victory and all three points. Man of the Match was the Portuguese Guedes who scored twice and assisted another from the striker position. This is a bit of a punt as the game was played on Monday and it's very rare a Monday game count for the week after but with the lack of games I'm willing to take the risk.

Benzema ST – Real Madrid - 90 -> 91 Rated: Real Madrid secured a hard-fought 2-1 victory over Athletic Bilbao on Wednesday to extend their lead on top of La Liga. Clinical is the best way to describe Benzema, as he proved the difference-maker again. Two well-taken goals, including the wonder strike to break the deadlock, gave Madrid all three points. This is a very questionable inclusion tho due to the upcoming Headliner promo on Friday and Benzema surely is Real's best player this season so he might miss out on an inform and will be included in the promo on Friday.

Lukaku ST – Chelsea - 88 -> 89 Rated: Chelsea came from behind to beat Aston Villa 3-1 on Boxing Day in the Premier League. Lukaku's substituion at the start of the second half eventually turned out to be a game changer for the Blues. The striker showcased brilliant movement to score Chelsea's second and also provided a brilliant stoppage-time run to win a crucial penalty with minutes left on the clock.

Skourpski GK – Bologna - 75 -> 81 Rated: As I said at the beginning, options for gold goalkeepers are very rare this week which leaves us with Bologna's shot-stopper Skorupski who made a total of 5 saves in his side's 3-0 victory against Sassuolo which earned him a 7.5 and MOTM from Gazzetta.

Sakho CB – Montpellier - 75 -> 81 Rated: Ligue 1 offers very little from their last matchday in terms of informs, esepcially when most of the players in L'Equipes TOTW are from Montpellier. Savanier got the highest match rating but he can't get in so I'M instead opting for Sakho who conceded a goal in their 4-1 win but still was rewarded with a 7.

Mwepu CM – Brighton - 75 -> 81 Rated: Brighton and Hove Albion ended their eleven match winless run in style thanks to sublime strikes from Neal Maupay and Leo Trossard against Brentford. Mwepu was one of the best this day. Blazed one early chance wide but gave a nice assist for Trossard's goal with a ball over the top.

Kluivert LM– OGC Nice - 76 -> 81 Rated: Nice ended a three-match home losing streak as they came from behind to beat RC Lens 2-1 at the Allianz Riviera. Justin Kluivert might be set for his first upgrade of the year which would also result in an upgrade for his OTW after he scored his side's winner 10 minutes before the final whistle and an 8 match rating from L'Equipe.

Twine LW – MK Dons - 75 -> 81 Rated: MK Dons produced a stunning second-half turnaround to come back from two goals down to beat Lincoln City 3-2 at the LNER Stadium. Scott Twince was crucial for his side in this comeback as he scored twice, including the winning goal near the end of the game.

B. Dia ST – Villareal CF - 77 -> 81 Rated: With only a handful games have been played from the major leagues due to winter break or COVID it's going to be a bit harder with predicting players. One who seems to be a no brainer is Boulaye Dia after he scored twice and assisted another in Villareal's 5-2 victory over Alaves last Tuesday.

Aboubakar ST – Al Nassr - 77 -> 81 Rated: One of a handful of gold strikers with goal contributions this week is Aboubakar and looking at options, he should get his inform on Wednesday. This is after he scored one and assisted another in Al-Nassr's 2-1 win over Al Hazem.

Viviano GK – Karagümrük SK - 72 -> 79 Rated: I've mentioned earlier that there are no standout performances from gold goalkeepers this week which made the decision a bit harder between those available but one who definetly stood out is Viviano. Fatih Karagumruk recorded a 1-1 draw at home against Fenerbahce in probably the hardest possible way and thanks to Viviano. Two of their defenders both got a straight red card 7 minutes before the half-time and with his side being down to 9 men for the rest of the game Viviano absolutely pulled out a masterclass between the sticks, ending the game with incredible 13 saves to secure a point for his side.

Nicolaisen CB – Toulouse FC - 66 -> 75 Rated: No Hat-tricks this week from any players which made it harder than usual to chose the reserves. One who could benefit from that could be Toulouse defender Nicolaisen who scored one and assisted the other in his side's 2-1 victory over Nimes.

Thomas RWB – Huddersfield - 64 -> 74 Rated: Huddersfield Town came from behind twice to claim an important win over Blackpool. Thomas grew into the game superbly after a frustrating first half where his crossing let him down but then produced two wonderful finishes inside three minutes to win the game for his side.

Musona CAM – Al Tai - 70 -> 78 Rated: One of two players from the MBS Pro League who could get an inform on Wednesday is Musona after he scored a brace in his side's 3-1 win over Al-Faisaly.

Loft ST – Scunthorpe Utd - 62 -> 72 Rated: Scunthrope came from behind to defeat League Two relegation rivals Oldham 3-1and recorded three important points thanks to substitute Ryan Loft who scored twice and assisted another after coming on at half-time.