FIFA22 Team of the Week 14 Prediction

Published on by Simpleblue 16 Comments 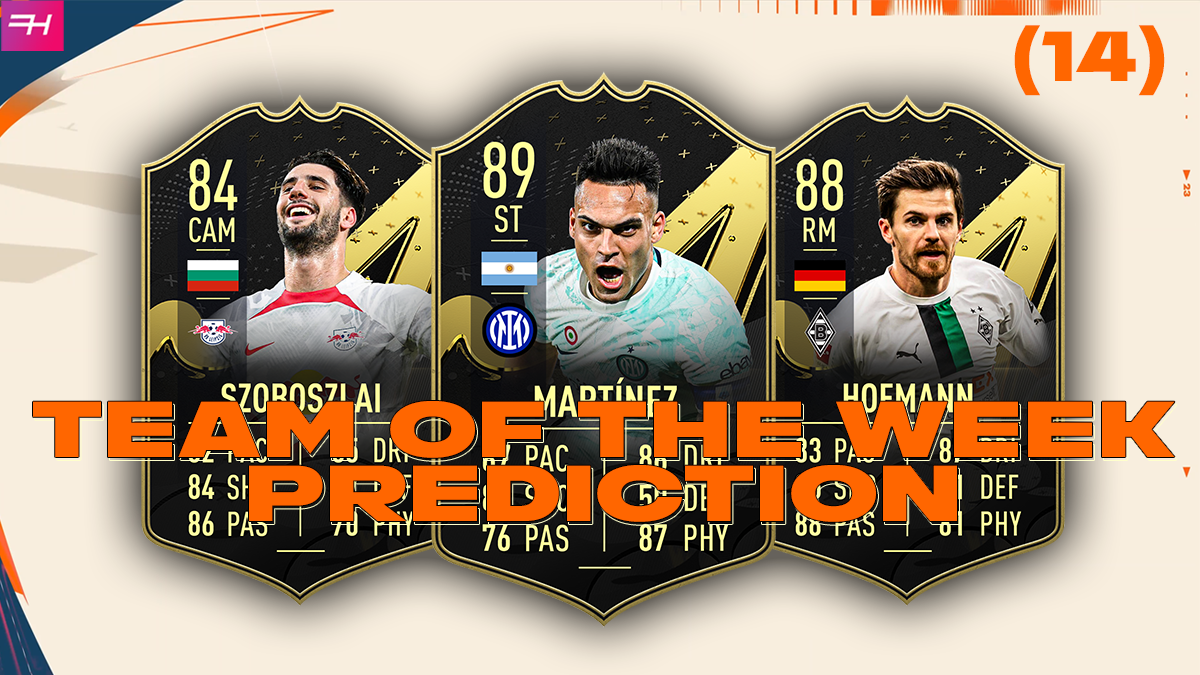 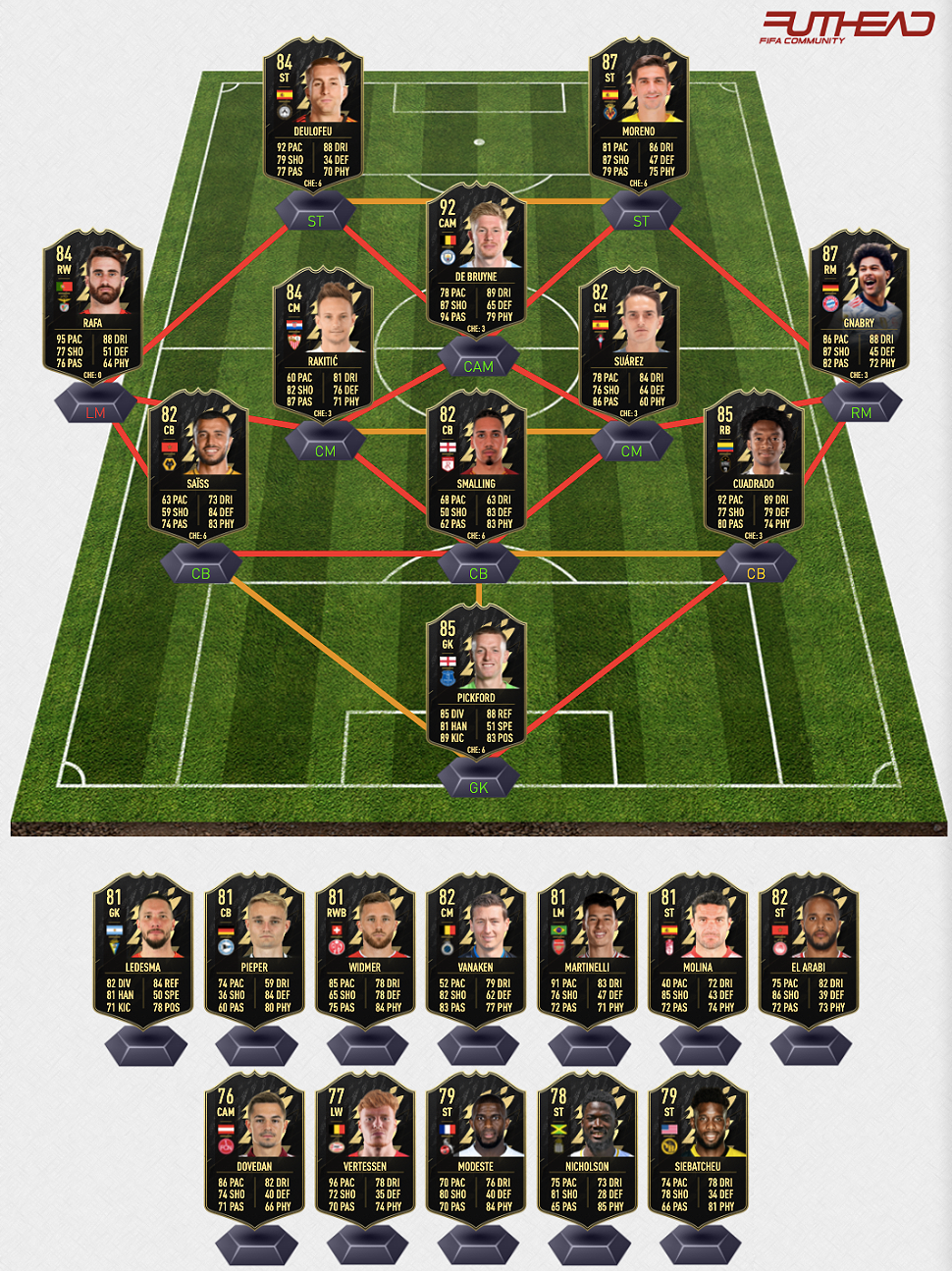 Pickford GK – Everton - 83 -> 85 Rated: Chelsea again failed to win after they drew 1-1 midweek against Everton. Pickford came up clutch for Everton when they needed him as he made several key stops on either side of half-time to keep his team in the contest. He denied the likes of James, Mount, Pulisic, Ziyech over the course of the first 70 minutes and then made a huge save to deny Silva a winner after Braithwaite's equaliser.

Saiss CB – Wolves - 78 -> 82 Rated: With most of the games in the Premier League being postponed due to COVID, the options for players from that league are more limited than usual. One who could make it into the side on Wednesday is Saiss who produced the most clinical finish of the night to hand his side a narrow 1-0 win over Brighton & Hove. Even more impressive was his game against Chelsea which he finished with three tackles and a big block to deny Kanté a late winner.

Smalling CB – Roma FC - 78 -> 82 Rated: Atalanta sufferd an unexpected slip in Bergamo on Saturday as Jose Mourinho's Roma visited the Gewiss Stadium to claim an unlikely 4-1 win over their hosts. Most people will include Tammy Abraham for his two goals but the centre-back just beats his countryman to the prize of being MOTM. Duvan Zapata has proven unstoppable in recent weeks but Smalling found a way to nullify the Colombian's threat and capped off his day's work with a crucial goal at the other end as well.

Cuadrado RB – Piemonte Calcio - 83 -> 85 Rated: Juventus collected three valuable Serie A points on Saturday night, although it was an underwhelming performance from the Italian giants, as they defeated Bologna 2-0 at the Stadio Renato Dall'Ara. With Juventus coming under more and more pressure from Bologna, the Colombian scored the goal that all but confirmed the points were heading to Turin. With the Old Lady forced to withstand the Rossoblu for large parts of the game, the ex-Fiorentina man also displayed his willingsness and aptitude when performing at the other end of the pitch. Although a 7 from Gazzetta isn't the highest match rating there could be a chance for him to be in this week.

Rakitic CM – Sevilla FC - 82 -> 84 Rated: One of the top games this week took place between Sevilla and Atleti and a late Lucas Ocampos goal saw Sevilla grab all three points. It was Ivan Rakitic tho who lit up this this match with an arrow of a strike that found the top corner of the Atletico Madrid net after seven minutes and the Croatian was the best player on the pitch throughout. He gave Sevilla a lot in the centre of the pitch, driving the home team forward and provided goal threat with his shooting in and aorund the box. Atleti struggled to handle him and he was awarded with the MOTM award.

D. Suarez CM – RC Celta - 78 -> 82 Rated: There have been a few other options for midfielders this week, one of them in the name of Denis Suarez who scored one and assisted another after he came off of the bench in Celta Vigo's 3-1 win against Espanyol Barcelona.

De Bruyne CAM – Manchester City - 91 -> 92 Rated: Manchester City reaffirmed their position at the top of the Premier League table on Tuesday night, thumping a despondent Leeds side 7-0 at the Etihad Stadium. The Belgian maestro was back to his best and put on a classic De Bruyne display. The forst goal was a fantastic finish from a tight angle, but his second was an absolute screamer that was blasted past Meslier. It was a magnificent performance from the world-class playmaker and it looks like he's now back at his high standarts from the past.

Gnabry RM – Bayern - 86 -> 87 Rated: Bayern Munich continued their winning run in the Bundesliga by securing a comprehensive 5-0 victory over VfB Stuttgart on Tuesday which also confirmed their position as the Herbstmeister. Serge Gnabry was by far Bayern Munich's best performer that day, ending the match with a hat-trick of goals and two assists to his name. Kicker awarded him with a perfect 1 match rating and POTW which should see him pick up his second inform on Wednesday.

Rafa RW – SL Benfica - 82 -> 84 Rated: Sport Lisboa e Benfica returned to the Liga Bwin with a trashing 7-1 over Maritimo after having secured the qualification for the final four of the League Cup. It was the fourth out of fives games where Benfica at least scored four goals and apart from Nunez it was once again Rafa who stood out. After one goal and three assists the game before he even topped that and scored one and assisted four for his side, and took his league tally to now seven goals and ten assists.

G. Moreno ST – Villareal CF - 86 -> 87 Rated: G player who always picks up one or two informs over the circle of a Fifa title is Gerard Moreno and he looks set to pick up his first inform on Wednesday after he scored two goals and assisted another in Villareal's 3-1 win away against Real Sociedad.

Deulofeu ST – Udinese Calcio - 78 -> 84 Rated: Udinese Calcio picked up three vital points against relegation-battling side Cagliari with a convincing 4-0 victory. Remember the Deulofeu Milestone card last year? We might get a similar looking card on Wednesday after he scored two of the four goals for his side and picked up an 8 match rating and POTW from Gazzetta.

Ledesma GK – Cadiz CF - 77 -> 81 Rated: Real Madrid were forced to settle for a frustrating point at home to Cadiz on Sunday night after a stubborn effort from the visitors. Although Los Blancos dominated with over 80 percent possession and had more than 30 shots, Cadiz ended their winning streak and the absolute standout was shot-stopper Ledesma who pulled out an incredible performance, ending the game with a total of nine saves.

Pieper CB – Arminia Bielefeld - 75 -> 81 Rated: Bundesliga had two matchdays counting this week so there might be a few small surprises but Pieper would definetly a deserved one after Bielefeld recorded a shocking 2-0 win away against Leipzig where Pieper helped to keep the clean sheet.

Widmer RWB – Mainz 05 - 75 -> 81 Rated: Mainz 05 recorded an important victory in their midweek fixture with a thumping 4-0 win at home to Hertha Berlin. There are two possible candidates for an inform, one of them is Widmer who scored one, assisted another and kept a clean sheet from the RWB position.

Vanaken CM– Club Brugge - 78 -> 82 Rated: One of the leagues who had two matchdays counting towards TOTW is the Jupiler Pro League and although EA ignored them in the past on a couple of occasions there's a good chance we will see one being featured this time. Club Bruges first recorded a 4-1 win against OH Leuven midweek and then drew their second game 2-2 against Anderlecht, Vanaken tho was heavily involved in his side's first game with assisting three of the four goals before he then scored the late equaliser in their draw. The other option could be De Ketelaere who scored twice in the first game and added another goal in the second one but with the amount of hat-tricks from gold strikers Vanaken is more likely.

G. Martinelli LM – Arsenal - 76 -> 81 Rated: A rampant first half performance from Arsenal was enough to sweep Leeds United aside. After scoring one midweek, Martinelli got his first Premier League brace courtesy of two top-notch finishes. The Brazilian was also a creative force, setting up more than five chances for his teammates and picked up a 9/10 and MOTM.

Molina ST – Granada CF - 77 -> 81 Rated: Granada recorded a much need and all important 4-1 victory in their relegation battle against La Liga table neighbors RCD Mallorca. Forward Molina scored three of the four goals for his side and should be a no brainer for an inform.

El Arabi ST – Olympiacos CFP - 79 -> 82 Rated: Olympiacos continued their run of unbeaten games in the Greece Super League with a comfortable 3-0 win midweek away at Atromitos Athens. All three goals came from the Moroccan forward El Arabi who should be an easy inclusion to the side.

Dovedan CAM – Nürnberg - 66 -> 76 Rated: Nürnberg responded to a heavy loss at Schalke last weekend to get their promotion hunt back on track with a straightforward win at second-from-bottom Erzgebirge Aue. Nikola Dovedan was the hero for his side, ending the game with a hat-trick to his name and should see himself being included in TOTW on Wednesday.

Modeste ST – Köln - 72 -> 79 Rated: With nearly no games being played in the lower English divisions we have less hat-tricks than previous weeks which leaves room for other inclusions. One of the could be Cologne's Anthony Modeste after he scored twice as Cologne came from behind to beat Wolfsburg. He also scored the game-winning goal on Sunday in his side's 1-0 over Stuttgart.

Vertessen LW – PSV - 69 -> 77 Rated: PSV made light work of relegation-threatened RKC with a 4-1 win in Waalwijk. It wasn't one of the usual goalscorers who decided the match, this time it was the Belgian winger Vertessen who got himself two goals and an assist and could make it into the side on Wednesday.

Nicholson ST – Sp. Charleroi - 71 -> 78 Rated: Sporting Charleroi bounced back from their defeat midweek against Genk in convincing style with a 4-0 away to KAS Eupen and Nicholson should be getting an inform after scoring three goals and assisting the other for his side.

Siebatcheu ST – BSC Young Boys - 72 -> 79 Rated: Young Boys recorded an thumping 5-0 win away at Lugano to end the first half of the season in style and Jordy Siebatcheu not just scored three, he was on target four times and thus should definetly get his inform on Wednesday.