FIFA22 Team of the Week 13 Prediction

Published on by Simpleblue 8 Comments Updated on 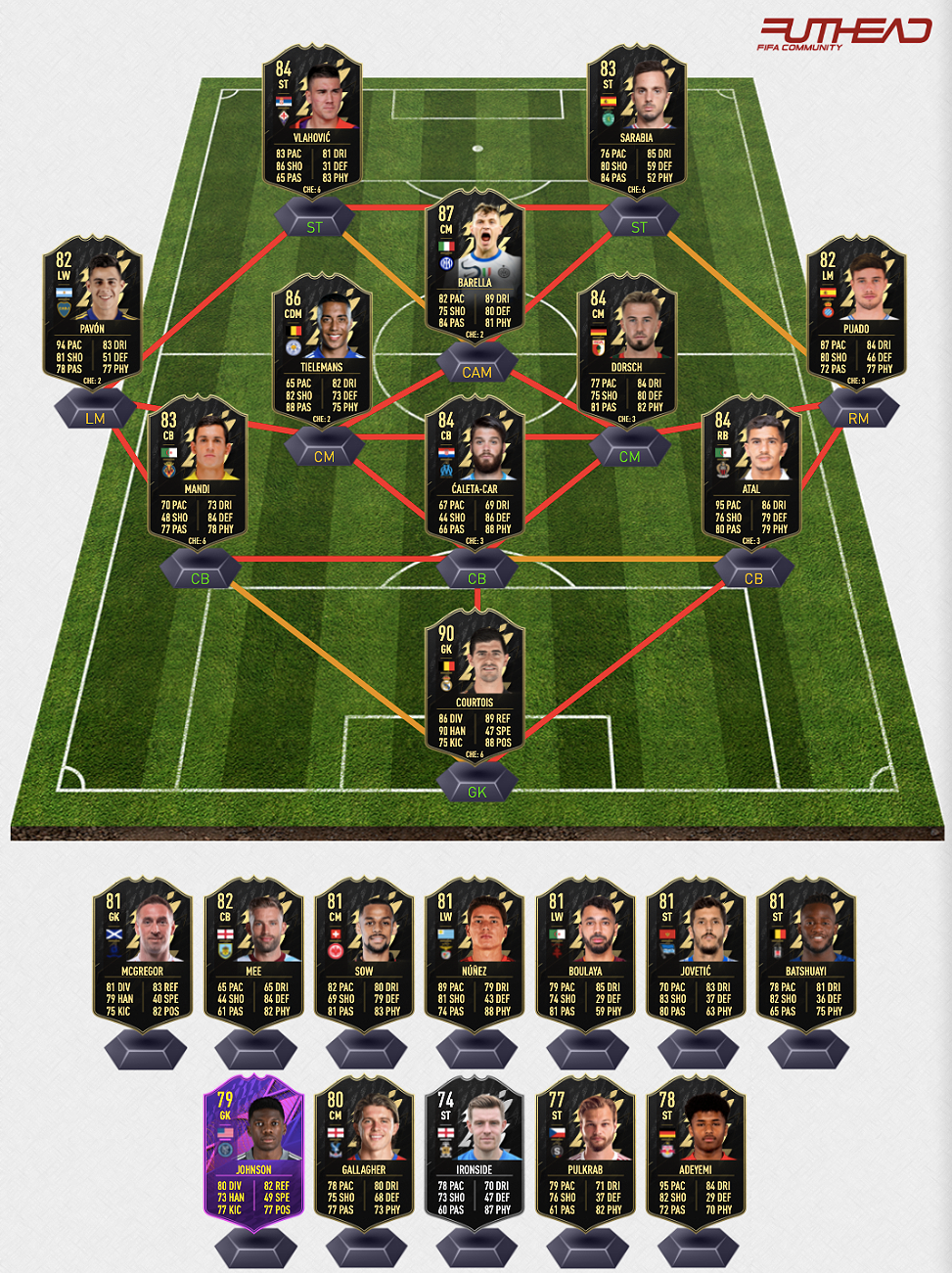 T. Courtois GK – Real Madrid - 89 -> 90 Rated: Goals from Karim Benzema and Marco Asensio saw Real Madrid as the clear winner in the Madrid derby on Sunday evening. It was Courtois tho who once again proved he's one of the best goalkeepers in world football. He was sublime in a Man of the Match performance about a week ago against Bilbao, and he was arguably even better in this clean sheet vs Atletico. He made seven saves, including three of the top-drawer variety.

Caleta-Car CB – Marseille - 82 -> 84 Rated: Olympique Marseille beat RC Strasbourg 2-0 at the Stade de la Meinau to pull up to second in Ligue 1 Uber Eats behind leaders Paris SG. One of the goals came from Caleta-Car who also picked up a 7/10 match ratings fom L'Equipe and thus should be featured in the side on Wednesday.

Mandi CB – Villareal CF - 80 -> 83 Rated: There have been a TON of options for defenders this week so it was a bit tricky to decide but one of them who stood out was Mandi. Villareal made it back to back wins in all competitions with a solid 2-0 win over Rayo Vallecano and Mandi scored one of the two goals, helped his side to keep the clean sheet and also made a vital block right after his side went up 1-0 to deny Vallecano the equaliser.

*Atal RB – OGC Nice - 81 -> 84 Rated: Looking at the Ligue 1 Uber Eats table, the top match took place between in-form Rennes and OGC Nice and ended in favour for the away side as Nice recorded a narrow 2-1 win. L'Equipe awarded both, Atal and Dante, with an 8 match rating but with Atal being on the scoresheet once I'm opting for him and predict him to pick up his SIF.

Y. Tielemans CDM – Leicester City - 84 -> 86 Rated: Leicester City emphatically returned to winning ways as they put four past Newcastle United and kept their first clean sheet since the opening day of the season. Tielemans was a class act in the middle of the park and dictated the tempo of the match, producing an all-action display on the afternoon. The Belgian broke the deadlock with a penalty into the top corner sending goalkeeper Martin Dubravka the wrong way. His second goal displayed his box-to-box qualities, as he ran from deep to get in support before smashing the ball home emphatically. He moved the ball well to keep things ticking along while the 24-year-old was highly industrious off the ball, complementing his all-round game and ended the match with five tackles, three clearances and one interception.

N. Barella CM – Inter - 86 -> 87 Rated: The Italian international grabbed the game by the scruff of the neck, leaving Cagliari with no answers. He was a driving force in midfield all night and provided the assists for Sanchez and Martinez’s goals in the second half. While he might not have scored himself, the performance on the night will certainly have left fans buzzing.

Dorsch CM – Augsburg 75 -> 84 Rated: Augsburg ended a run of 13 away matches without a win going back to February and also ended Colonge's unbeaten streak at home this season thanks to a 2-0 win in the opening match on Friday. André Hahn scored the opener for his side but it was Niklas Dorsch who took the headlines after he sealed the deal with a 25-yard stunner to make it 2-0 for his side.

Puado LM – RCD Espanyol - 78 -> 82 Rated: Fans of both sides have gone through a rollercoaster of emotions on the weekend in the match between Espanyol and Levante. It was a seven goal-thriller with the better outcome for the home side as Espanyol took all three points with a 4-3 and Puado scored twice in this game.

C. Pavon LW – Boca Juniors - 78 -> 82 Rated: There are not a ton of oustanding performances when it comes to wingers this week but one who definetly stood out was Cristian Pavon. The Boca Juniors winger scored twice and assisted another two in his side's thumping 8-1 home win over Central Cordoba and I would be very surprised if we not see him in the side on Wednesday.

P. Sarabia ST – Sporting CP - 80 -> 83 Rated: Gold strikers with more than one goal contributions are very rare this week and although I already have a Liga Portugal striker I have to inlcude another one to fill the gap. Sporting CP remains one of the two unbeaten sides in the league after their 2-0 win against Boavista and Sarabia was involved in both goals with scoring one and assisting another.

D. Vlahovic ST – Fiorentina - 82 -> 84 Rated: Fiorentina sealed an emphatic 4-0 win against relegation-battling Salernitana on Saturday, who remain rooted to the foot of the Serie A table. The Serbian forward again proved his worth with his 14th and 15th Serie A goals of the season to lead the Capocannoniere standings from Ciro Immobile by two goals. The striker was quiet in the first half and was at one point seen limping around after a tough challenge but battled on to do what he does best. He now has 32 Serie A goals for the calendar year and will equal Cristiano Ronaldo’s record of 33 if he manages to find the net against Sassuolo or Hellas Verona.

McGregor GK – Rangers - 77 -> 81 Rated: Surprisingly there have been an insane amount of really good performances when it comes to goalkeepers this week so picking the second keeper for the subs is more like a dice roll. I'm predicting Ranger's shot-stopper McGregor to take the spot after he made a total of 8 saves in his side's 2-0 win away at Hearts.

Ben Mee CB – Burnley - 79 -> 82 Rated: Burnley laboured to a 0-0 draw with West Ham in a display which moved them to within two points of Wednesday's opponents Watford. Ben Mee read play well and contained his opposition to good effect, registering six ball recoveries as well as several vital clearances in his own box.

D. Sow CM – Frankfurt - 77 -> 81 Rated: Trailing by two Schick goals after just 22 minutes of a pulsating Bundesliga encounter, Eintracht Frankfurt lit up the afternoon to score five times as they blazed past a stunned Bayer Leverkusen. Ndicka and Sow are the two realistic option from this game but with the amount of defenders and Sow being awarded MOTM I'm opting for him after he got a goal and an assist.

Boulaya LW – Metz - 76 -> 81 Rated: Metz returned to winnings ways after two consecutive defeats with a convincing 4-1 win at home to Lorient in which was could prove to be crucial three points at the end of the season. The Algerian midfielder Boulaya was the decisive player on the pitch, scoring one and assisting another and picked up an 8 match rating and MOTM.

Nunez LW – SL Benfica - 76 -> 81 Rated: I've just recently included Nunez after his performance in Benfica's questionable win over Belenenses and he got snubbed but this week he shouldn't with the game being played under normal circumstances. Benfica recorded a 4-1 win away at Famalicao and Nunez got himself three goals. The other option would be Rafa with one goal and three assists but with Nunez being the official MOTM I can't ignore him.

Jovetic ST – Hertha Berlin - 77 -> 81 Rated: Another player who usually wouldn't make it into my prediction is Jovetic. Hertha Berlin recorded a 2-0 win over Arminia Bielefeld and Jovetic scored one of the two goals for his side, picking up MOTM from Kicker.

Batshuayi ST – Besiktas - 76 -> 81 Rated: Besiktas ended their run of 5 games without a win across all competitions with a convincing 4-2 win at home against Kayserispor. Former Crystal Palace attacker Batshuayi was the main man for his side, scoring two and assisting another to secure all three points.

S. Johnson GK – New York City FC - 73 -> 79 Rated: We got a Hero item from last year's final with Zelarayan and I expect the same to happen this time again. New York City FC tore off the Audi MLS Cup Playoffs bumbler they've worn for the last five years in business-like fashion on Saturday, procuring their first-ever MLS Cup with a penalty kick shootout triumph over Portland Timbers. The Cityzens netminder had very little to do until he pulled off game-saving stops in extra time. Johnson then put NYCFC in the shootout driver seat by smothering Portland's first two tries from the spot to seal the triumph in the end and being rewarded MLS Cup MVP.

C. Gallagher CM – Crystal Palace - 74 -> 80 Rated: Everto seemed to have regained some confidence after ending their eight-game winless streak but Crystal Palace were on hand to give them a reality check and secured a much-needed victory over Benitez' men. Gallagher once again put in a big performance as he came up with two goals at the end of an all-action display. He finally should pick up his long overdue inform.

Pulkrab ST – Sparta Praha - 69 -> 77 Rated: Another week, another Sparta Praha player in my prediction. Sparta pulled of an emphatic 5-0 win at home against Bohemians Praha and Pulkrab scored three times for his side. The only reason he could miss out would be the inclusion of Hlozek who assisted three of the five goals.

Adeyemi ST – RB Salzburg - 71 -> 78 Rated: RB Salzburg continues lonely at the top of the table after their 5-0 win at home against WSG Tirol. Adeyemi, who's rumored to join Borussia Dortmund, came into the game in the second half and showed why so many clubs are interested in signing him. He ended the game with three goals and an assist and should be a safe inclusion in the side on Wednesday.

Ironside ST – Cambridge Utd. - 64 -> 74 Rated: Cambridge United posted a third straight win in all competitions with a scintillating 5-0 victory at Cheltenham Town midweek. It was a memorable night for the U's and for their forward Ironside who scored three times for his side and should find his way into TOTW on Wednesday.