FIFA22 Team of the Week 10 Prediction

Published on by Simpleblue 6 Comments Updated on 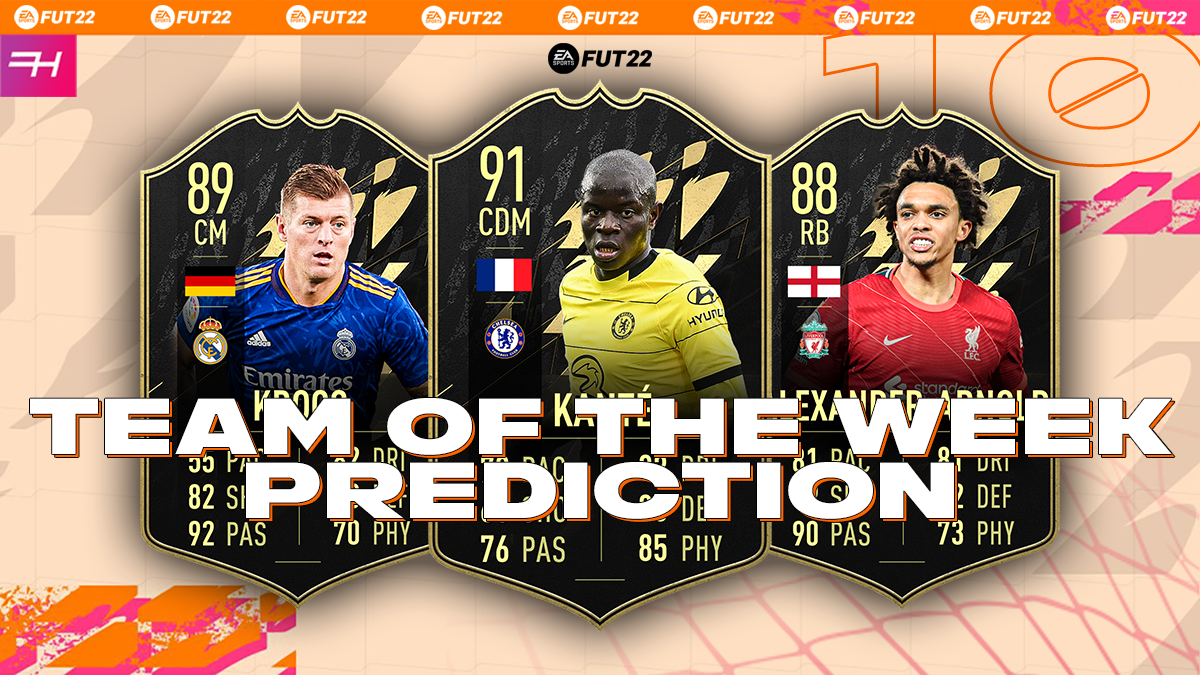 Black Friday is just around the corner! We're back with domestic football after the last international break for 2021 and to be honest, TOTW10 isn't looking that good apart from one or two players. This week was extremely difficult to predict, there have been a lot of defenders and midfielders but less higher rated strikers to choose from so maybe we can expect a few surprises on Wednesday. Players like Mané are not in because I expect him to be in the Best of TOTW which should drop this week and apart from Kanté most players will likely end up being SBC fodder. 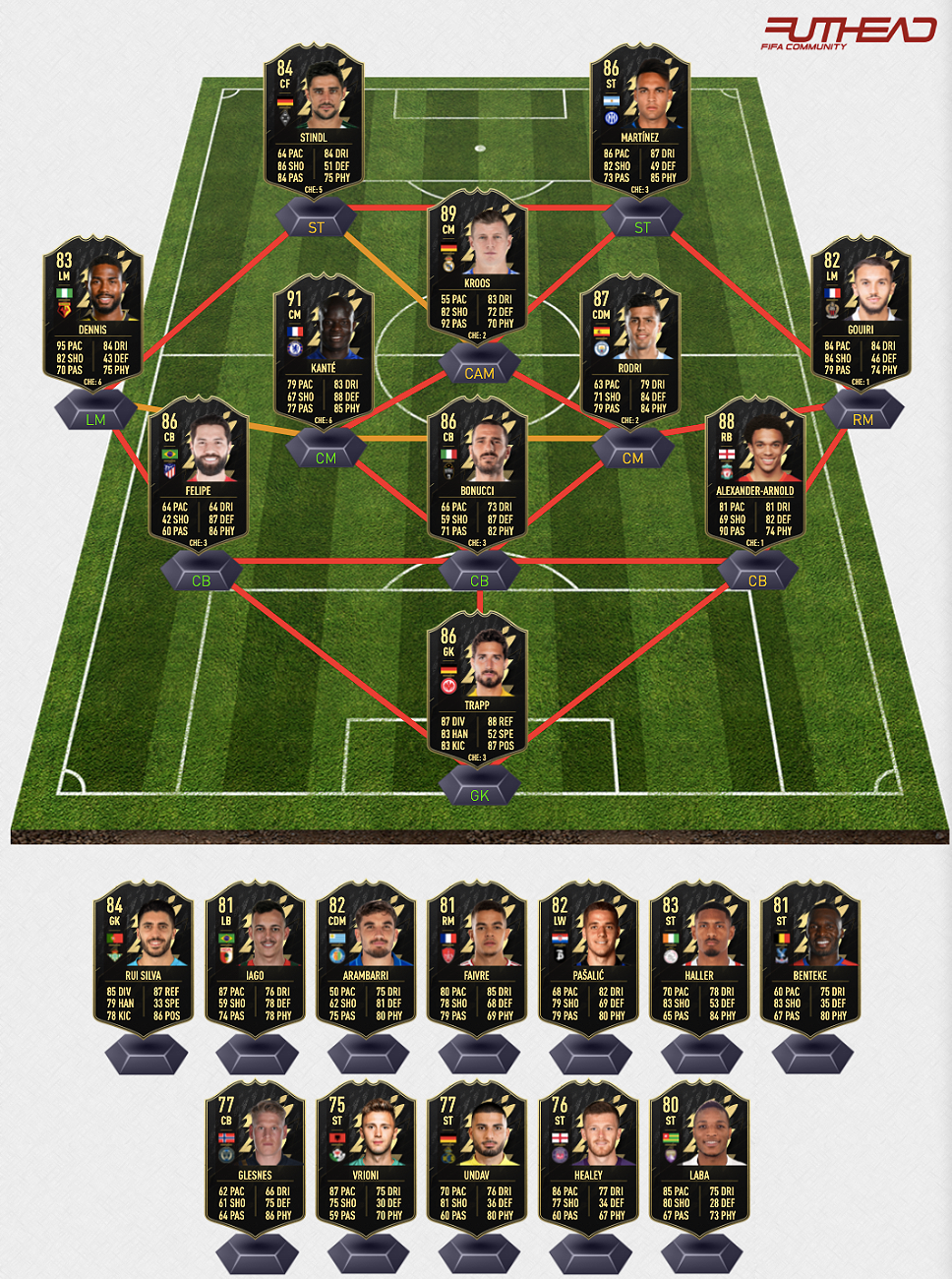 K. Trapp GK – Frankfurt - 84 -> 86 Rated: Across seasons and stadiums, Freiburg went into the contest against Frankfurt unbeaten in 10 Bundesliga matches on their own soil but goals from Kostic and Lindstrom inflicted a first home defeat on Freiburh since March. Freiburg had chances to score but Trapp was at it again and again with a total of 4 saves, denying Freiburg from scoring and helping his side securing three points and the clean sheet.

Felipe CB – Atletico de Madrid - 84 -> 86 Rated: Atletico Madrid maintained the pressure on the like of Real Sociedad, Real Madrid and Sevilla in the La Liga Title race after securing a hard-fought 1-0 victory over Osasuna on Saturday. Felipe was one of the best performers for Atletico Madrid in this game. He was rock solid at the back, winning multiple tackles and making several clearances. Operating at the heart of the backline, the Brazilian was finally rewarded when he headed home from close range to secure all three points for his side.

Bonucci CB – Piemonte Calcio - 85 -> 86 Rated: Juventus snapped Lazio's 19-game unbeaten run at the Stadio Olimpico as they beat the Biancocelesti 2-0 on Saturday evening. It was far from a vintage display from Juventus but Lazio's attackers were kept under wraps by Bonucci and his defensive teammates. With Paulo Dybala out, the responsibility fell on his shoulders from the penalty spot. He dispatched both kicks with aplomb to give Juventus a precious victory and picked up POTW from Gazzetta.

*Alexander-Arnold RB – Liverpool - 87 -> 88 Rated: Liverpool returned to action and returned to winning ways after the defeat to West Ham before the international break, smashing Arsenal and their 10-match unbeaten run all over the place to run out 4-0 victors. A buccaneering display from the England international, who looked near unstoppable each time he pushed forward to attack on the right. He had a shot tipped over and created a chance for Jota early on before setting up Mané for the opening goal with a lovely set-piece delivery. He continued to torment the Arsenal backline after the break with his attacking intent, creating several other chances before laying on the assist for the fourth.

N. Kanté CM – Chelsea - 90 -> 91 Rated: After a long international break, club football returned in good fashion for all Chelsea fans. Their Blues went on to beat Brendan Rodgers' struggling Leicester City 3-0 at the Kind Power Stadium. Kanté was at his best, never allowing Leicester to create anything from the build-up. Apart from frequently breaking up play, Kanté got a sensational goal to his name, putting Chelsea in a comfortable position in the first half.

T. Kroos CM – Real Madrid - 88 -> 89 Rated: An away trip after the international break is always a difficult test, but Real Madrid left the scenic city of Granada unscathed as they returned to the top of the La Liga Santander in style with a 4-1 victory. Kroos is in tremendous form, and since he retired from the national team, he looks fresher than ever. He assisted two goals, with the second for Nacho Fernandez being a brilliant, driven ball after a well-worked corner kick routine with fellow midfielder Luka Modric.

Rodri CM – Manchester City - 86 -> 87 Rated: Manchester City eased to a comfortable 3-0 Premier League win over Everton on Sunday, and moved to within three points of early-season leaders Chelsea. The Spaniard was everywhere against the Toffees, snuffing out fires all over the pitch, fizzing inch-perfect passes out wide while sliding through balls into advanced areas. His goal was also a thing of beauty, a bullet from around 25 yards which arched into the top corner.

E. Dennis LM – Watford - 74 -> 83 Rated: Ten-man Manchester United fell to another humiliating loss, succumbing 4-1 against Watford at Vicarage Road which was their fifth defeat of the Premier League season. Emmanuel Dennis had a pretty good day, setting up Watford's opener and looked lively throughout. He linked well with his teammates, caused United a lot of trouble and rewarded himself with a goal.

Gouiri LM – OGC Nice - 78 -> 82 Rated: Having lost at home to Montpellier before the international window, Nice could ill-afford another Slip. They had to come from behind to win 2-1 at promoted Clermont to climb second in the table thanks two too late goals from France Under-21 star Gouiri who now has eight goals for the season.

L. Martinez ST – Inter - 85 -> 86 Rated: Reigning champions Inter gained ground on AC Milan and Napoli in the race to retain their title, with a hard-fought 3-2 win over the Partenopei at the Stadio Giuseppe Meazza in Serie A on Sunday evening. The Argentina international provided the crucial goal to end Napoli's undefeated start to the Serie A campaign, but gave mich more to Inter during what could be a crucial result for their Scudetto defence. The attacker's energetic display and willingness to run the channels or chase down opposition players gave the Nerazzurri the platform for victory. This is definetly a big punt I'm taking here but I can see it happen due to the limited amount of higher rated strikers this week.

Stindl CF – M'gladbach - 82 -> 84 Rated: Borussia Mönchengladbach proved too hot for Greuther Fürth to handle as they eased to a 4-0 victory on Matchday 12, maintaining unbeaten on home soil this season. Hofmann was named POTW by Kicker but with him being in TOTW9 the next one is Lars Stindl who assisted three of the fours goals.

Rui Silva GK – Real Betis - 81 -> 84 Rated: Goalkeepers have been extremely difficult to predict for the subs with no real standouts so I'm going with Real Betis shot-stopper Rui Silva who made a total of 4 saves in his side's 3-0 win away at Elche.

Iago LB – Augsburg - 75 -> 81 Rated: Augsburg earned an historic win over Bundesliga leaders Bayern Munich, whos reply through Lewandowski wasn't enough to prevent their second league defeat of the season, thanks to goals from Mads Pedersen and Andre Hahn. One of the defenders who stood out, defensivly and when it comes to attacking, was Iago who not only helped his side securing the win but who also provided the assist for Hahn's second goal and picked up a 2 from Kicker.

Arambarri CDM – Getafe - 79 -> 82 Rated: Getafe went back on winning ways after their 0-1 loss against Villareal before the international break with a convincing 4-0 win against Cadiz. Arambarri was instrumental for his side, assisting two goals and helped keeping the clean sheet from a deeper midfield position.

Pasalic LW – Bergamo Calcio - 78 -> 82 Rated: Atalanta Bergamo recorded back-to-back wins in the 2021/22 Serie A campaign after they defeated Spezia with 5-2. With a group of representatives from Gosk Kastela, the team of his hometown as well as the team in which he was raised as a player, Pasalic put in a wonderful performance. He scored the first goal, which was the equaliser, the third to make it 3-1 for his side and also registered an assist. Sadly he played LW which really isn't looking good in terms of the inform or even for the Featured TOTW.

Faivre RM – Stade Brestois 29 - 75 -> 81 Rated: RC Lens were unable to reclaim second place in the Ligue 1 Uber Eats table on Sunday as in-form Stade Brestois 29 thumped Les Sang et Or 4-0 in Brittany. Two players picked up an 8/10 match rating from L'Equipe but with Le Douaron just scoring one and being silver I'm instead opting for Faivre who also got a goal but who also registered an assist.

Benteke ST – Crystal Palace - 75 -> 81 Rated: Belgium booked their spot at the 2022 World Cup with a 3-1 victory over Estonia in Brussels on Saturday. In the absence of Lukaku and Batshuayi, Benteke was handed a rare opportunity to lead the charge and he took his chance well. He scored the opener for his side, which was the 30-years-old's first strike in two years for his country, and added an assist to his game.

S. Haller ST – Ajax - 80 -> 83 Rated: Ajax Amsterdam returned to the top of the Eredivisie after a comfortable 5-0 victory at RKC Waalwijk. Two of the goals came from Sebastien Haller who, due to the lack of higher rated gold strikers, could also be the Featured TOTW on Wednesday.

Glesnes CB – Philadelphia - 69 -> 77 Rated: With the MLS Cup playoffs proceeding further into the final games we can probably expect a few MLS players to be in TOTWs the next weeks. One of them could be Philadelphia's Norwegian center back Jakob Glesnes after he stepped up in the 123rd minute against New York Red Bulls to rocket his side to the Eastern Conference Semifinals with a 25-yard volley, the latest goal ever scored in MLS Cup playoffs history.

Vrioni ST – WSG Tirol - 65 -> 75 Rated: Relegation-battling side WSG Tirol went back on winning ways in the Bundesliga in Austria in fashion with a huge 5-1 win against third places Wolfsberger AC. Tirol's forward Vrioni was on target for his side, scoring twice and assiting another to help his team secure all three points which could prove to be crucial in their battle against relegation.

Undav ST – Union SG - 69 -> 77 Rated: Promoted side Union St. Gilloise is still the surprising team in Pro League and cemented their lead in the Belgium top-flight after they trashed Oostende 7-1. German forward Undav took the headlines after he scored three goals and added an assist to his name and should pick up an inform on Wednesday.

Healey ST – Toulouse FC - 68 -> 76 Rated: Toulouse continued their fine form in the league and keep the lead in Ligue 2 after their 4-1 win at home against Sochaux. Forward Healey made sure his side kept the three points after he scored all four goals for the team.

Laba ST – Al Ain FC - 74 -> 80 Rated: The only team from the UAE Pro-League which is included in FUT is Al-Ain and it looks likely they will be rewarded with an inform on Wednesday. Al-Ain remains unbeaten at the top of the tbale after they defeated Al-Jazira and Laba scored three of the five goals.