FIFA22 Team of the Week 9 Predictions

Published on by Simpleblue 12 Comments 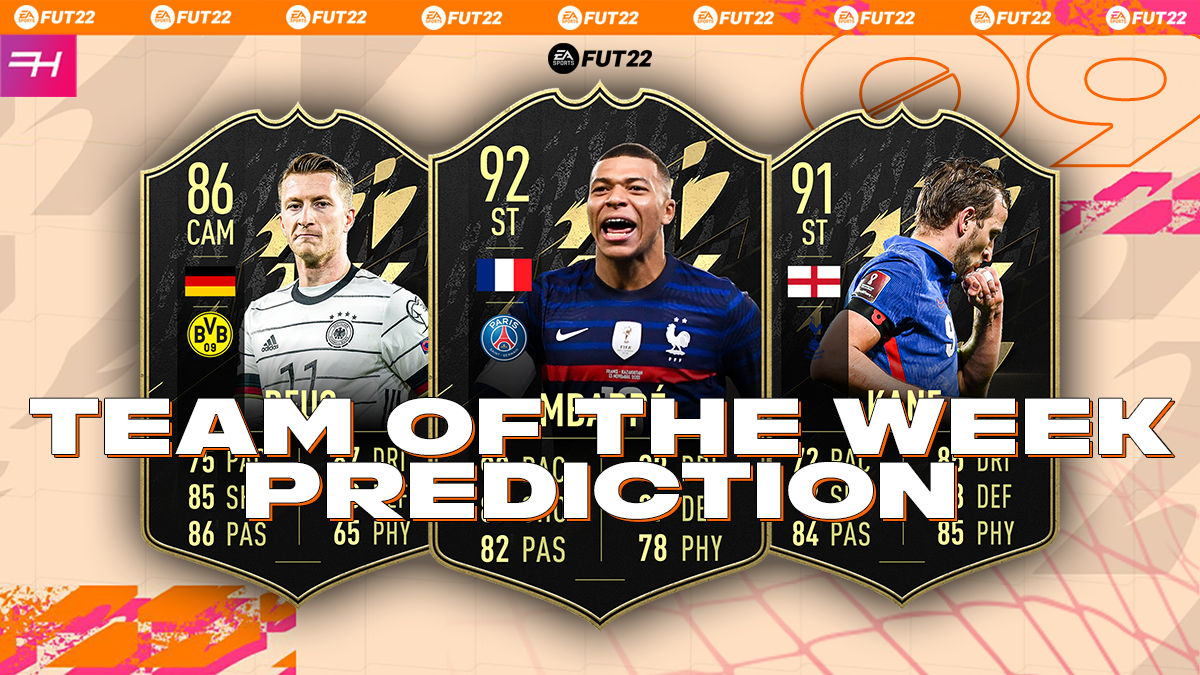 After Neymar in TOTW8 we will most likely see Mbappé on Wednesday! International breaks are always hard to predict with less players available to choose from and due to the importance of some games we can probably expect a few hero cards too. There are a lot of 50/50 decisions and players who might miss out because of POTM (Bundesliga & Ligue 1) this week and overall TOTW looks average, Mbappé will be the one everyone wants to have. 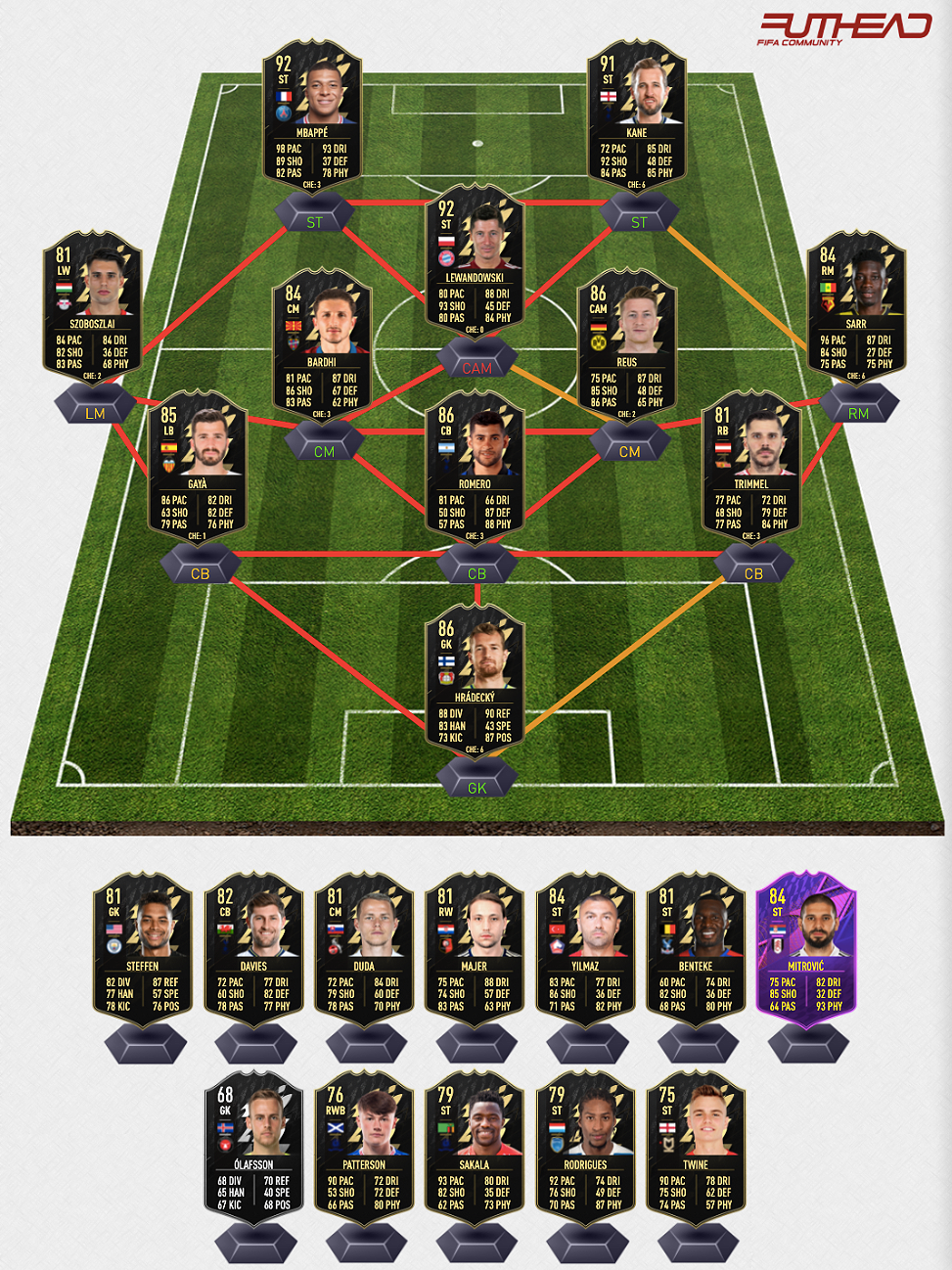 L. Hradecky GK – Leverkusen - 85 -> 86 Rated: The goalkeeper position in the starting XI is going to be an interesting one, we've had a few decent performances and you will see Emi Martinez in most predictions. I do instead go with Finland's shot-stopper Lukas Hradecky who made a total of 7 saves in his sides 3-1 win against Bosnia and Herzegovina which would be his second inform of Fifa 22 after he got in the first time in TOTW2.

Gaya LB – Valencia CF - 83 -> 85 Rated: Spain picked up a crucial 1-0 victory against Greece in their penultimate World Cup qualifying encounter to maintain their top spot in Group B thanks to a Sarabia penalty. Jose Gaya was impressive at both ends of the pitch. He handled his defensive duties effortlessly, while also joining the attack at times. The full-back constantly pushed up on Spain's left flank, and made life tough for Greece's defenders.

C. Romero CB – Tottenham - 84 -> 86 Rated: Argentina closed in on a direct World Cup spot on Friday with a narrow 1-0 win in Uruguay despite the absence of Lionel Messi for most of the match thanks to a beautiful goal from Angel Di Maria. Tottenham's Romero was key to frustrating Uruguay when they looked dangerous during the opening half-hour or so. He made several vital clearances (11 in total), 4 interceptions, won all of his aerial duels and kept Uruguay's attackers quiet to seal the victory for his side.

Trimmel RB – Union Berlin - 77 -> 81 Rated: With a match in which the home side dominated by far, both Austria and Moldova ended their participation in the European qualifiers and Austria took the last three points with a 4-1 victory. Arnautovic once again scored for his country but his recent Rulebreaker item makes it more unlikely he'll make it into the side so I'm instead picking Union Berlin's Trimmel who got himself a goal and an assist.

E. Bardhi CM – Levante UD - 79 -> 84 Rated: With Germany already being qualified for the World Cup in 2022, North Macedonia is battling against Romania for the play-off spot and recorded a 5-0 win to head into the final matchday with one point ahead of them. Three of the goals came from UD Levante's midfielder Enis Bardhi and although two of the goals came from the spot it should be enough for him to make it into the side on Wednesday.

M. Reus CAM – Borussia Dortmund - 85 -> 86 Rated: lready qualified Germany maintained their free-scoring form under Hansi Flick by securing a thumping 9-0 win over Liechtenstein on Thursday. It was a brutal performance from the Germans, who were on the front foot right from the get-go. Marco Reus operated primarily as a hybrid between a number ten and a false nine. The Borussia Dortmund skipper did not disappoint at all, playing a leading role in Germany's chance creation. Reus was involved heavily in the build-up to Sane's first goal. Less than a minute later, he got on the scoresheet himself and also registered two assists in the first half. Kicker awarded him with a 2 and MOTM, his inform would be a bit pointless though due to his recent RTTK card.

I. Sarr RM – Watford - 82 -> 84 Rated: Already qualified Senegal finished the group phase with an unbeaten record after defeating Congo 2-0. Watford striker Ismaila Sarr was the one to shine when he first broke the deadlock with a ferocious shot in the 14th minute before tapping home for the second 10 minutes later.

Szoboszlai LW – RB Leipzig - 77 -> 81 Rated: A game with no serious effect on the outcome of Group I was played between Hungary and San Marino with the better end for Hungary as they beat the bottom of the table side comfortably with 4-0. Leipzig's Szoboszlai scored two of the four goals for his side and should stand a good chance to pick up an inform, probably being the Featured one too.

Lewandowski ST – Bayern - 92 -> 93 Rated: It won't come as a surprise to hear that Poland were keen to grab the opportunity with both hands of Andorra being down to ten man after 21 seconds into the game. It was Lewandowski again who stood out after he scored a brace and added an assist to his game and it's going to be interesting to see if EA is going to give him the inform this time after he missed out numerous times this year plus we have Mbappé and Kane nearly confirmed being in the side.

H. Kane ST – Tottenham - 90 -> 91 Rated: England took a step closer to qualifying for the 2022 World Cup after the Three Lions trashed Albania by five goals at Wembley. Harry Kane, who has scored just once in the Premier League for Tottenham, netted a first-half hat-trick, sealed with a sizzling scissor-kick, surpassed Wayne Rooney as England's record scorer in competitive games and levelled Jimmy Greaves in the total scoring charts which should secure his inform in TOTW9 and also could result in getting a record breaker card.

K. Mbappé ST – Paris SG - 91-> 92 Rated: World champions France booked their ticket to the finals of the 2022 FIFA World Cup with a thumping 8-0 win over Kazakhstan at the Parc des Princes on Saturday night. Coman could have largely claimed the title Man of the Match but it ultimately comes down to Mbappé. Four goals and one assist, there's nothing more to say about Mbappé's performance on the night. It marked the first time since 1958 that a France player scored four goals in a game and with Black Friday coming soon Mbappé is another high profile player to join the Best of squad.

Steffen GK – Manchester City - 77 -> 81 Rated: The United States men's national team pulled off their biggest result in World Cup qualification with a 2-0 victory over rivals Mexico. Steffen made a pair of massive saves early in the game, just as Mexico were seizing firm control of the game midway through the first half. Despite starting just one game for the USMNT (and four for Man City) since August, Steffen looked confident bith while handling the ball and playing with it at his feet.

B. Davies CB – Tottenham - 79 -> 82 Rated: Wales celebrated Bale's 100th appearance with a comprehensive win over Belarus to keep them in the hunt for a home play-off in the World Cup qualifiers. Ramsey stood out in that game with two goals but due to the amount of midfielder available and with very limited options for defenders I'm instead opting for Ben Davies who got himself a goal in the same game.

Duda CM – 1. FC Köln - 75 -> 81 Rated: Slovakia already was out of the race for a play-off spot before the final matchday but that ddidn't prevend them to finish their qualifier campaign in a decent way. Slovakia recorded a 6-0 win away against Malta and Cologne's Duda was without a doubt the start of the show, scoring a hat-trick and also adding an assist to his name.

Majer RW – Stade Rennais FC - 76 -> 81 Rated: Croatia stayed on course to qualify automatically for the 2022 World Cup as a 7-1 rout of Malta in Thursday's Group H qualifier. There are three serious contenders for an inform from this game, one of the is Stade Rennais' midfielder Lovro Majer who played on the RW and scored twice for his side.

Yilmaz ST – LOSC Lille - 81 -> 84 Rated: Turkey kept their hopes of qualifying for the 2022 World Cup alive after they beat Gibraltar with 6-0 and it's going to be a thrilling final matchday on Tuesday as they still stand a chance to take the top spot in their group. Lille's forward Burak Yilmaz got himself a hat-trick of assists and therefore has a chance to pick up his first inform on Wednesday.

Benteke ST – Crystal Palace - 75 -> 81 Rated: Belgium booked their spot at the 2022 World Cup with a 3-1 victory over Estonia in Brussels on Saturday. In the absence of Lukaku and Batshuayi, Benteke was handed a rare opportunity to lead the charge and he took his chance well. He scored the opener for his side, which was the 30-years-old's first strike in two years for his country, and added an assist to his game.

Mitrovic ST – Fulham - 81 -> 84 Rated: It was a must-win match for Serbia against Portugal, who came into the clash level on points but with an inferior goal difference to their hosts, and Portugal were stunned 2-1 by Serbia at the end of the match, sending the hosts into the play-offs. Alexander Mitrovic's last-minute winner snatched automatic qualification for Serbia on Sunday night and we can probably expect to see him getting a hero item.

Olafsson GK – Midtjylland - 58 -> 68 Rated: International breaks are always not easy to predict and especially the reserves when there are not as much hat-tricks as usual. But a pattern this year seems to be that EA always likes to include a silver inform every week and it could be Iceland's shot-stopper Olafsson this week who made a total of 7 saves in his side's 0-0 draw against Romania.

Patterson RWB – Rangers - 66 -> 76 Rated: Silver players are always a bit more difficult to predict during international breaks with less ha-tricks than usual which leaves room for others. One of them could be Scotland's Patterson who got himself a goal and an assist in his side's 2-0 win over Moldova which means that Scotland booked their play-off spot in Group F due to Israel's loss against Austria.

Sakala ST – Rangers - 73 -> 79 Rated: Zambia kept their hopes of qualifying for the 2022 World Cup alive after they beat Mauritania with 4-0. Ranger's forward Sakala just recently missed out on an inform when Tavernier got the favour but this time it looks more likely after he scored three of the four goals, one of them coming from the spot.

G. Rodrigues ST – ESTAC Troyes - 72 -> 79 Rated: A side in the qualifiers who won't participate in the 2022 World Cup but managed to pick up their third win in Group A is Luxembourg after they defeated bottom of the table side Azerbaijan 3-1. Troyes winger Gerson Rodrigues was involved in all goals, scoring two and assisting the other and should find his way into TOTW9 this week due to the lack of hat-tricks from silver players.

Twine ST – MK Dons - 65 -> 75 Rated: Most of the players in this predictions are coming from international games but there are also one or two who make it into the side from the lower English leagues. MKS Dons moved back into the Sky Bet League One play-off positions with a dominant 4-1 victory over Cambridge U and Twine got himself two goals and two assist.