FIFA22 Team of the Week 8 Predictions

Published on by Simpleblue 18 Comments 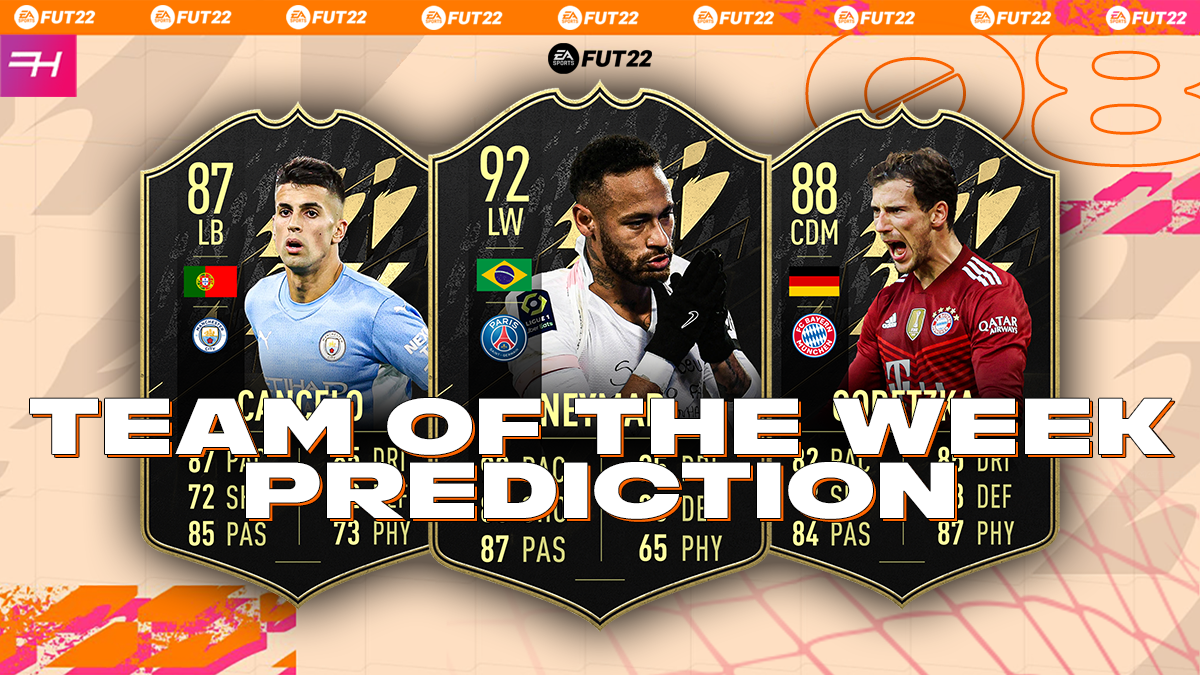 With season 1 in FUT ending this week we're looking at a decent side for Wednesday! We finally should get either Neymar or Mbappé featured in TOTW and we also should get a few other decent players. It also was another strong week of hat-tricks for players in the reserves so don't be mad when someone is not included, there's simply not enough space for everyone. I've also did a prediction for silver stars but with the season ending this week, it's unlikely EA will drop a silver star in weekly objectives, they never did it last Fifa BUT they included them in milestones so fingers crossed. Enough said, go ahead and take a look at your potential red player picks for this week! 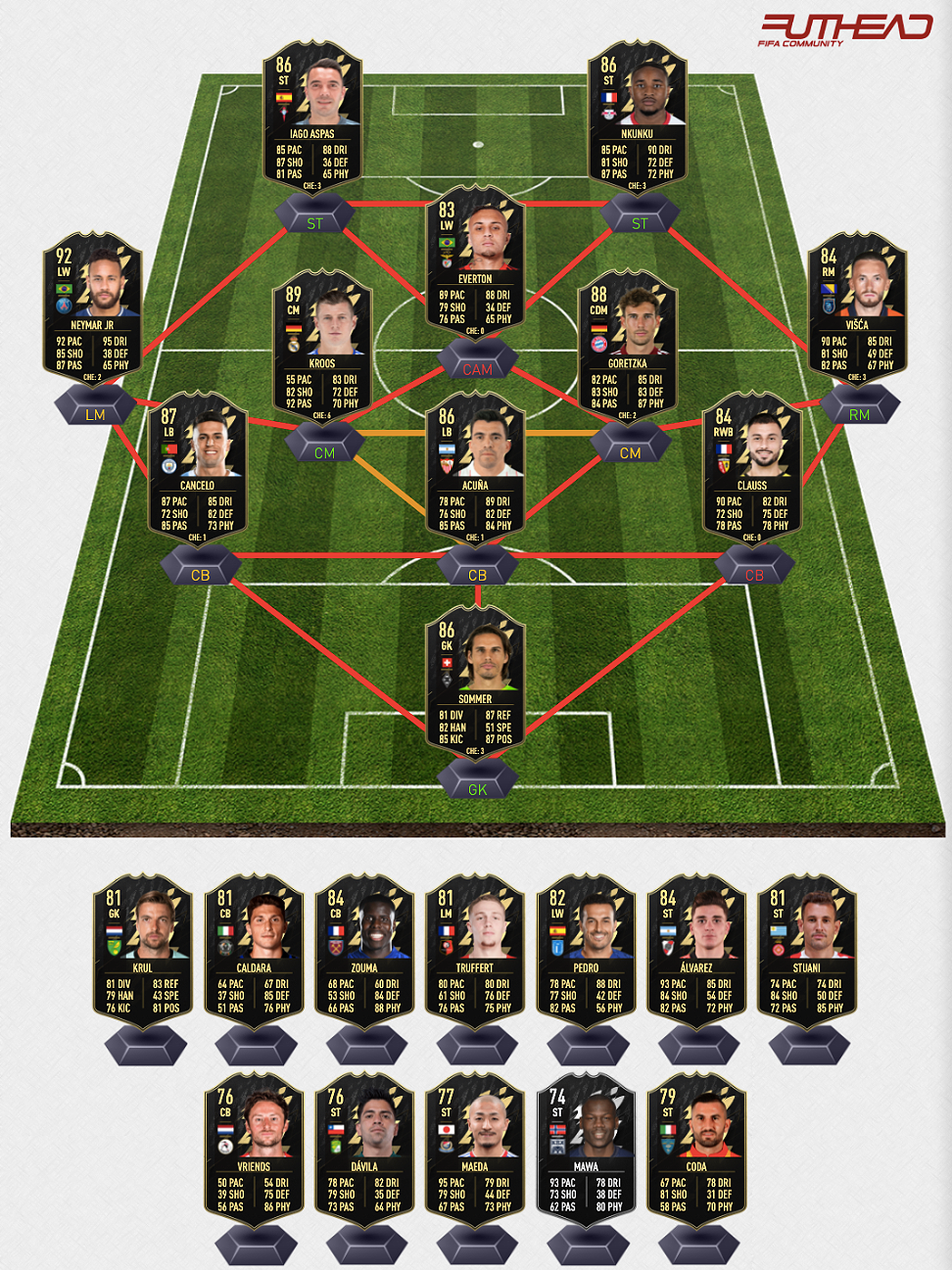 Y. Sommer GK – M'gladbach - 85 -> 86 Rated: The German top-flight provides two high rated options for goalkeepers this week, one of them is Gladbach's Yann Sommer. Gladbach took the lead in the first-half but Widmer cancelled out Neuhaus's strike to earn Mainz a point at home. What looks like to be a lucky point for Mainz on paper was actually the opposite as Mainz was firing shot after shot in the second-half and it was thaks to Sommer that Gladbach just conceded one. Sommer made a total of seven saves for his side and picked up a 1.5 match rating and MOTM from Kicker.

J. Cancelo LB – Manchester City - 86 -> 87 Rated: Manchester City came away from the Manchester derby with all three points on Saturday, thanks to a 2-0 win at Old Trafford in one of the most one-sided derby's between both sides in the past years. After a stunning display midweek against Club Brugge, the Portuguese full-back was in his elements once again as he constantly found himself in acres of space on the left flank and made the most of it. He forced the own goal for 1-0 with a fine cross, then forced De Gea into a couple of saves before setting Bernardo Silva up for the second goal.

J. Clauss RWB – RC Lens - 77 -> 84 Rated: A sold-out Stade Bollaert-Delelis greeted Lens and Troyes for the opening game of Matchday 13 and the crowd saw a relentless Lens side grabbing all three points with a comfortable 4-0 win. Another scintillating performance from Jonathan Clauss was topped off with two assists and a goal as he continues his tremendous form this season. He was the heartbeat of this entertaining Lens side and picked up a well-deserved 8 match rating and MOTM from L'Equipe.

M. Acuna LB – Sevilla FC - 84 -> 86 Rated: One of the games which was featured in last week's marquee matchups should produce an inform on Wednesday. FC Sevilla defeated city rivals Real Betis 2-0 and climbed third in the La Liga table on 27 points, level with second-placed Real Madrid. Argentine fullback Marcos Acuna gave his side the lead in the 55th minute with a thumping shot from outside the box following a layoff from Ocampos and although his inform isn't looking to be a good options for the fullback position, he could be an even better sub at CDM.

T. Kroos CM – Real Madrid - 88 -> 89 Rated: Real Madrid defeated Rayo Vallecano for their second straight underwhelming 2-1 victory. Los Blancos could have easily lost this game, too, if it weren't for the heroics of superstar midfielder Toni Kroos. Not only did the No. 8 score the opener with perfect technique, but he had a massive goal-line clearance in the final minutes of the match to secure all three points for his side.

L. Goretzka CDM – Bayern - 87 -> 88 Rated: Bayern Munich remained atop the Bundesliga table with a 2-1 victory over Freiburg at the Allianz Arena and ended Freiburg's unbeaten run in the league this season. Bayern's standout player on the day was Goretzka. A dynamic and physical presence in midfield, the German ace took no prisoners in an all-round performance. He hardly put a foot wrong and was all over the pitch and also opened Bayern's goal tally.

E. Visca RM – Basaksehir - 81 -> 84 Rated: Another Fifa, another Edin Visca inform on the way. Istanbul Basaksehir grabbed all three points with a 3-1 away to Yeni Malatyaspor and Visca got himself a goal and an assist. Not the most interesting inform and he's most likely going to be near discard but a reliable player when you need a RM in a prediction.

Everton LW – SL Benfica - 80 -> 83 Rated: Sorry in advance to everyone who was hoping for a SIF Luis Diaz but it looks like someone else is taking his spot in TOTW8. Benfica absolutely trashed Braga at home on Sunday evening, taking all three points after their 6-1 win. There are three serious options from this game for an inform but the one who stood out the most was Everton who scored two goals and assisted another two for his side. The other two options are Nunez who scored one and assisted two or Rafa, who got himself two goals and one assist.

Neymar Jr. LW – Paris SG - 91 -> 92 Rated: Paris Saint-Germain survived a late scare to beat Bordeaux 3-2 on Saturday night to reestablish their ten-point lead at the top of the table. After a disappointing start to the season, the Brazilian confirmed his return to a better form. Already very important in the middle of the week against Leipzig, he once again took his responsibilities to help his side on the ball exits and concretized his two chances in the first half with two goals. Both, him and Mbappé got an 8 match rating from L'Equipe but with Neymar being MOTM we could see him getting his first inform on Wednesday.

Aspas ST – RC Celta - 84 -> 86 Rated: Barcelona, who just announced the return of their midfeild metronome Xavi, somehow managed to blow a three-goal lead away to Celta Vigo on Saturday evening, two of the goals for Celta Vigo came from their captain Iago Aspas. Repelling attack after attack, Barca looked like they had done enough to take the win, but in stoppage time they finally cracked and Aspas emerged as Celta's hero when he swept home a stunner to equalise in the 95th minute.

C. Nkunku ST – RB Leipzig - 84-> 86 Rated: Borussia Dortmund were under the cosh right from the early moments of the game, with the absence of key players hitting them hard, and RB Leipzig duly took adavantage of it and earned a deserved 2-1 home victory. Leipzig once again saw them inspired by Christopher Nkunku who's his side most inform player in recent weeks. Nkunku was a threat throughout the whole game and ended his game with a goal and an assist. The only thing going against his SIF is the fact that he recently got a Rulebreaker SBC, the other option then would be Poulsen.

T. Krul GK – Norwich - 77 -> 81 Rated: Norwich City finally have their first Premier League win of the season after goals from Normann and Teemu Pukki sealed a 2-1 victory over Brentford. Tim Krul was crucial in goal for the Canaries, making a total of six saves, helping his side to end their run of 20 Premier League games without a win.

K. Zouma CB – West Ham - 81 -> 84 Rated: Another sensational peformance from West Ham saw them leapfrog Liverpool into third in the Premier League after a 3-2 win at a raucous London Stadium. Zouma showed his versatility by switching from right to left centre-back after Ogbonna's injury and was just as capable on his non-favoured side. Put in a couple of crunching tackles to cement himself as a Hammers fan favourite with cries of Zouuuum echoing around the ground that grew even louder after his goal to seal the victory for his side.

Caldara CB – Venezia - 76 -> 81 Rated: Venezia earned a dramatic 3-2 victory against Roma in Serie A's Sunday lunchtime match and, despite squandering an early lead, the Venetians remarkably regained their advantage. Caldara opened the scoring for his side early in the game and although his side conceded twice he picked up an 8 match rating from Gazzetta and him being a gold card makes it more possible to end up being in TOTW8 on Wednesday.

Truffert LM – Stade Rennais FC - 75 -> 81 Rated: Stade Rennais welcomed Lyon to Brittany with just goal-difference seperating the sides in fifth and sixth respectively. You could have expected an evenly matched affair, but instead the hosts bombarded the OL goal and ended the game with a 4-0 win. Two of the goals came from Truffert, who usually plays left-back, but was subbed on on left-mid from where he scored both of his goals.

Pedro LW – Latium - 78 -> 82 Rated: Lazio Roma went back on winning ways after two consecutive draw with a comfortable 3-0 win against Salernitana. Pedro, who got a Flashback card a few weeks ago, scored one of the goals and assisted another and looks likely to pick up a pretty pointless inform on Wednesday.

Stuani ST – Girona FC - 76 -> 81 Rated: Girona made it back-to-back wins in La Liga 2 on Thursday after they came from behind to win 3-1 against Alcorcon on Thursday last week. The one who shone was forward Stuani who scored all three goals in 10 minutes after he got subbed on at half-time and helped his side to pick up all three points.

J. Alvarez ST – River Plate - 81 -> 84 Rated: We saw it in the past that a gap of two weeks isn't enough for the next inform but one who should get in even though his first inform was in TOTW is Julian Alvarez. River Plate remains top of the table after their 5-0 over Patronato de Parana and Alvarez ran riot, scoring four of the five goals for his side.

Vriends CB – Sparta Rotterdam - 67 -> 76 Rated: Usually I would go with hat-tricks in reserves but one who should be a no-brainer this week is Vriends. Sparta Rotterdam recorded their second league win of the campaign after a comfortable 3-0 victory at Willem II and center-back Vriend not only kept a clean sheet, he also scored two of the three goals which should be a guaranteed inform for him.

V. Davila ST – Leon - 68 -> 76 Rated: I already said it earlier, we once again have a good amount of hat-tricks this week to chose from for the reserves and I fully expect some of them not being featured. One who could be in is Davila after he scored all three goals in Leon's 3-0 win over Necaxa.

M. Mawa ST – Kristiansund BK - 64 -> 74 Rated: The last player in my prediciton with a hat-trick could came from Norway's Eliteserien. Kristiansund went back to winning ways after two losses and a draw with a convincing 4-2 win away at Odds BK and Mawa got himself three of the four goals.

D. Maeda ST – Yokohama FM - 69 -> 77 Rated: This is going to be an interesting one but it's definetly a game where we should see an inform coming from. Yokohama FM absolutely trashed Tokyo FC 8-0 at home and Maeda got himself three goals in that game. The other option for an inform from that game is Koike who also got himself two goals and an assist from left-back.

M. Coda ST – Lecce - 72 -> 79 Rated: Lecce kept pace with league leaders Brescia after matchday 12, winning comfortably 4-0 against relegation-battling Parma. Massimo Coda got the headlines after he scored three of the four goals for his side, making himself a strong contender for TOTW8.