FIFA22 Team of the Week 7 Predictions

Published on by Simpleblue 44 Comments Updated on 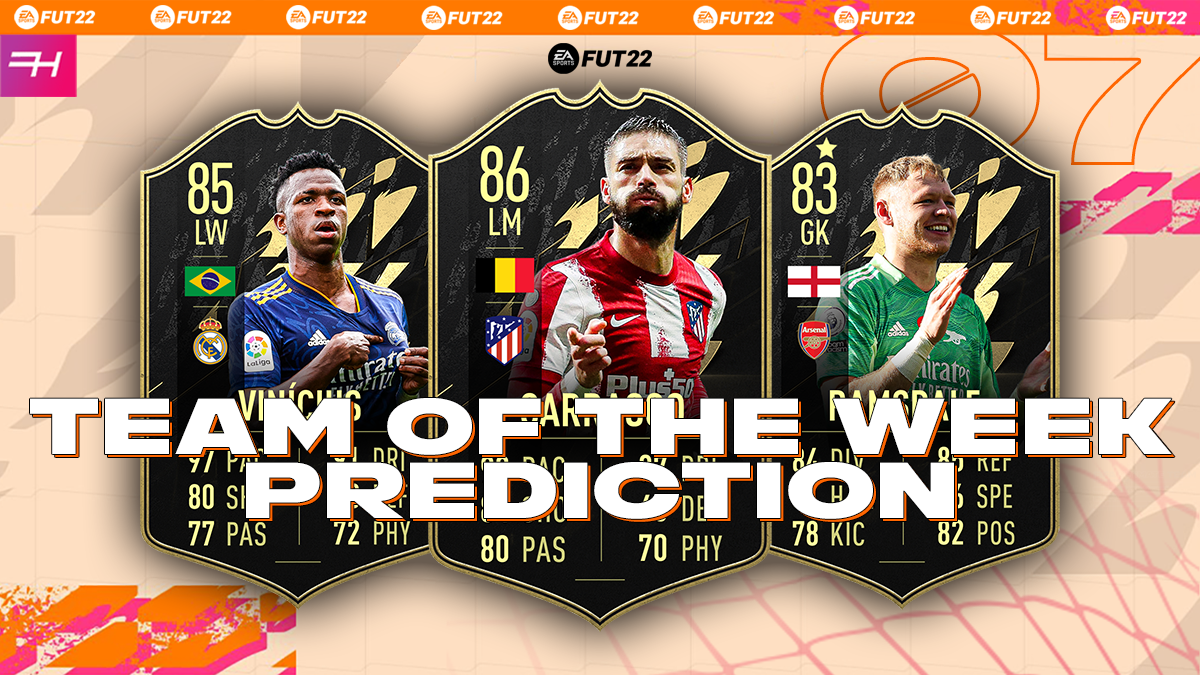 Before you start looking at this weeks prediction I want to leave a few words here. You will most likely ask a lot about Ronaldo and why he isn't in here, the reason is simple. Yes he was MOTM against Tottenham but usually 1G/1A for such a high rated player isn't enough to get an inform, I wouldn't rule him out completely though. Next up, Thomas Müller deserves an inform but looking at last week and what happened with Foden, he shouldn't get in as the gap between his first IF and potential SIF is too low. And finally, hat-tricks. There have been 11 or 12 hat-tricks the past weekend, most of them from silver players from lower leagues so a lot of players missed out due to the limited spots available. But let's see how I predict to get an inform in TOTW7 on Wednesday! 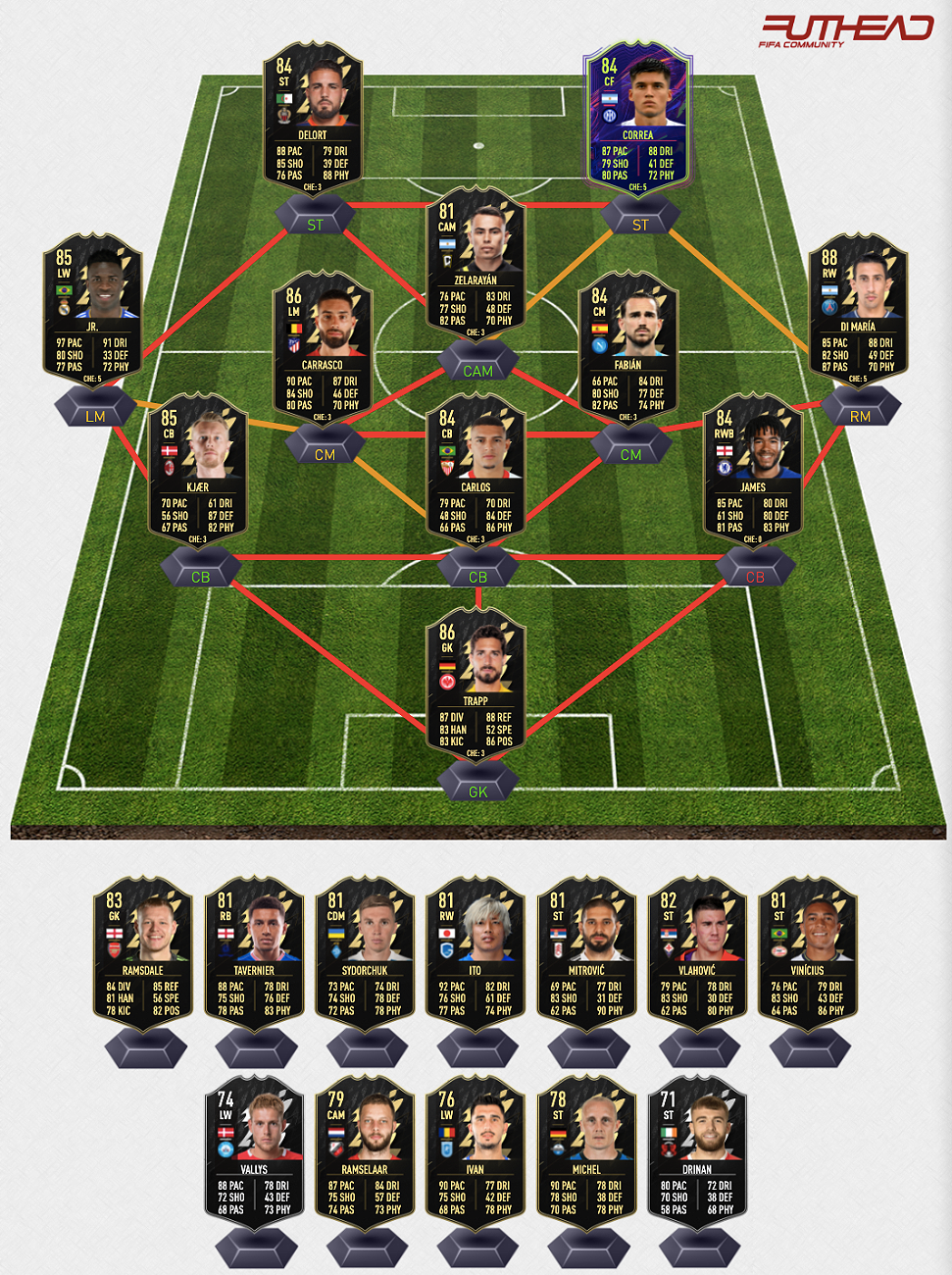 K. Trapp GK – Frankfurt - 84 -> 86 Rated: Goalkeepers have been hard to predict again this week with no standout performances when it comes to gold player. Eintracht Frankfurt secured a last-minute draw against RB Leipzig and it was Trapp who kept his side in the game with a total of five saves.

S. Kjaer CB – AC Milan - 83 -> 85 Rated: AC Milan secured another three points on Sunday evening as they beat Roma by two goals to one at the Olimpico in a game which was very entertaining. Kjaer showed an incredible performance, he stopped everything that came towards the Milan goal in the last 25 minutes of the game. It was one of his best displays with the Milan shirt and although Milan conceded a goal he picked up an 8 match rating from Gazzetta which is huge.

D. Carlos CB – Sevilla FC - 82 -> 84 Rated: Sevilla bounced back after a disappointing 1-1 draw mid-week against Mallorca with a 2-0 over Osasuna and kept in touch with league leaders Real Madrid. Diego Carlos was solid at the back, keeping the Osasuna attackers quite and on top of that, he scored the opener for his side to put them ahead right before the half-time whistle.

R. James RWB – Chelsea - 81 -> 84 Rated: Chelsea kept their grip on the top of the table with a 3-0 victory over Newcastle on Saturday afternoon. The England international was the primaty attacking outlet for Chelsea and looked like a major threat in the first half, but the end product was lacking. Upped the ante after the break and continued to make dangerous forward forays. He then produced two excellent finishes to put Chelsea in the driving sit, a top-notch performance from James.

Fabian CDM – Napoli - 82 -> 84 Rated: Napoli continued to march, returning to first place in the Serie A standing after their 3-0 win mid-week against Bologna. Insigne scored two of the three goals but both have been penalties and with Fabian Ruiz scoring the other and was awarded MOTM by Gazzetta he's more likely to be in.

Zelarayan CAM – Columbus Crew - 76 -> 81 Rated: Talking now about a player who's the reason Columbus Crew kepps chasing the playoff spot. MLS had two matchdays counting towards TOTW7 and Zelarayan was the decisive man in both games. He scored one and assisted another two mid-week in Columbus' 3-2 win over Orlando and again scored two goals Sunday night in his side's 3-1 win away at DC United. If you haven't seen the goal against Orlando yet, make sure to do!

Y. Carrasco LM – Atlético de Madrid - 84 -> 86 Rated: Atletico Madrid returned to winning ways in La Liga on Sunday with a dominant 3-0 home victory over Real Betis that helped them leapfrog their opponents into fourth place in the table. Carrasco looked much mor inspired early, relishing a matchup with backup right-back Martin Montoya. He created chances for Griezmann and De Paul inside the first 15 kinutes before he opened the scoring with a 27th-minute rocket off his left foot. The Belgian capped his excellent display – his best this season – with an 80th-minute assist for Joao Felix.

Di Maria RW – Paris SG - 87 -> 88 Rated: Paris Saint-Germain made life incredibly hard from themselves as they were forced to come from behind to seal a thoroughly unconvincing 2-1 win over Lille at the Parc des Princes. Di Maria was by far the best performer for PSG. The Argentine lokked in good touch from the start, finding useful passes in behind the backline while being a menace with his trickery in the final third. He was even mor effective in the second-half, providing the assist for Marquinhos's equaliser before scoring the winner late in the game.

Vinicius Jr. LW – Real Madrid - 83 -> 85 Rated: Real Madrid travelled to Elche after mid-week disappointment vs Osasuna and with a few changes to his usual line-up, Real Madrid walked away with all 3 points in a narrow 2-1 win. Madrid would not have won this match without Vinicius Jr. With Benzema out, Vinicius stepped up to the plate. His first goal was a cool left-footed finish. And his second was even better, as he calmly knocked the ball over Elche's keeper. Although some of his touches were sub-par, allowing Elche to unleash express counters, he made up for it.

A. Delort ST – OGC Nice - 81 -> 84 Rated: There were just four places and three points seperating surprise package Angers from their third-placed visitors Nice at kick-off and Nice had to battle back against Angers after Boufal opened the scoring. It then was Andy Delort who sealed all three points for his side, first equalising 10 minutes into the second half before he snatched all three points for Nice with a stunning volley at the death.

J. Correa ST – Inter Miami - 81-> 84 Rated: Inter Milan defeated Udinese 2-0 in their Serie A game on Sunday and keep on chasing AC Milan and Napoli on top of the table by bagging three more points. Correa was full of energy and neat touches and almost supplied the opener for Barella, who misfired. Broke the deadlock with a great mazy run and blast and then killed the game with a stunning finish which probably secured his first upgrade on Wednesday.

A. Ramsdale GK – Arsenal - 74 -> 83 Rated: Arsenal secured an outstanding 2-0 win over Leicester City on Saturday afternoon with goals from Gabriel and Smith Rowe scored which was their most complete performance of the season. Could he be any better than his outstanding distribution showing? Absolutely he could. Quite the day for the England international who made what will surely be the save of the season from a James Maddison free-kick. Kept Arsenal in it with some unreal saves and also picked out some unbelievable passes.

J. Tavernier RB – Rangers - 77 -> 81 Rated: Glasgow Rangers came from behind at Fir Park on Sunday afternoon to inflict a 6-1 hammering on Motherwell in their Scottish Premiership clash. There are two options for an inform from that game with Sakala and Tavernier but with the huge amount of hat-tricks this week I have o make a cut. Tavernier is my pick for an inform after he recorded a goal and two assists in that game and he also got a goal and an assist mid-week in Rangers' 2-2 draw.

Sydorchuk CDM – Dynamo Kyiv - 75 -> 81 Rated: One of the few sides who are still unbeaten in European club football is Dynamo Kyiv after they recorded a narrow 3-2 win away at Mariupol. Sydorchuk got himself two goals in that game and with the lack of gold midfielders this week he has a shout for an inform on Wednesday.

J. Ito RW – KRC Genk - 77 -> 81 Rated: A really really nice looking inform with super sub potential should come on Wednesday in the name of Ito. GRC Genk recorded a 6-2 win against Zulte Waregem and Japanese winger Ito was involved in three of the goals with scoring one and assisting two.

Vinicius ST – PSV - 77 -> 81 Rated: We might not just get one Vinicius on Wednesday, a second one could be included. PSV Eindhoven returned to winning ways after their heavy 0-5 loss against Ajax with a 5-2 win over Twente and Vinicius got himself two goals and assisted another, helping his side secure all three points.

Vlahovic ST – Fiorentina - 78 -> 82 Rated: Fiorentina went back to winning ways with a convincing 3-0 win over Spezia after their narrow defeat against Lazio last matchday thanks to Dusan Vlahovic. His second professional hat-trick was quite nice and showcased how good he is and why he's on the list of many big clubs.

Mitrovic ST – Fulham - 75 -> 81 Rated: Fulham extended their win streak to now four games in a row after they took all three points with a 3-0 over West Brom. Not only Fulham continued their streak, Mitrovic did too. The Serbian took his leagie tally to now 18 goals in 15 games after he scored all three goals for his side, one of them being a penalty.

Vallys LW – Silkeborg IF - 64 -> 74 Rated: I've never had a week doing a prediciton with such a huge amount of hat-tricks being scored so this one is a 50/50 pick. That being said, Vallys scored three goals in his side's 6-0 win against SonderjyskE.

Ramselaar CAM – FC Utrecht - 72 -> 79 Rated: The second Eredivisie player we should see in TOTW on Wednesday is Bart Ramselaar after he scored three goals as Utrecht eased to a 5-1 victory over Willem II.

A. Ivan ST – Univ. Craiova - 68 -> 76 Rated: Yes there have been a bunch of hat-tricks and there are definetly players who will miss out due to the limited spots for silvers but one who should be in is Andrei Ivan after he scored four goals in Univ. Caiova's 5-2 win over CS Mioveni.

S. Michel ST – SC Paderborn 07 - 70 -> 78 Rated: Bundesliga 2 got an inform last week and EA might not give back 2 back informs, esepcially with the amount of hat-tricks this week. Thus Sven Michel's inclusion in my prediction is another 50/60 pick. Paderborn cruised to a 4-2 win away at Karlsruher SC and Michel scored three of the four goals for his side.

A. Drinan ST – Leyton Orient - 61 -> 71 Rated: There have been a lot of hat-tricks in the lower English league so I expect at least two of them being featured on Wednesday. One of them came form Drinan who not only scored a hat-trick, he also managed to assist another two for his side in their 5-0 against Hartlepool. With being involved in all five goals, I totally expect him to be in.