FIFA22 Team of the Week 6 Predictions

Published on by Simpleblue 22 Comments Updated on 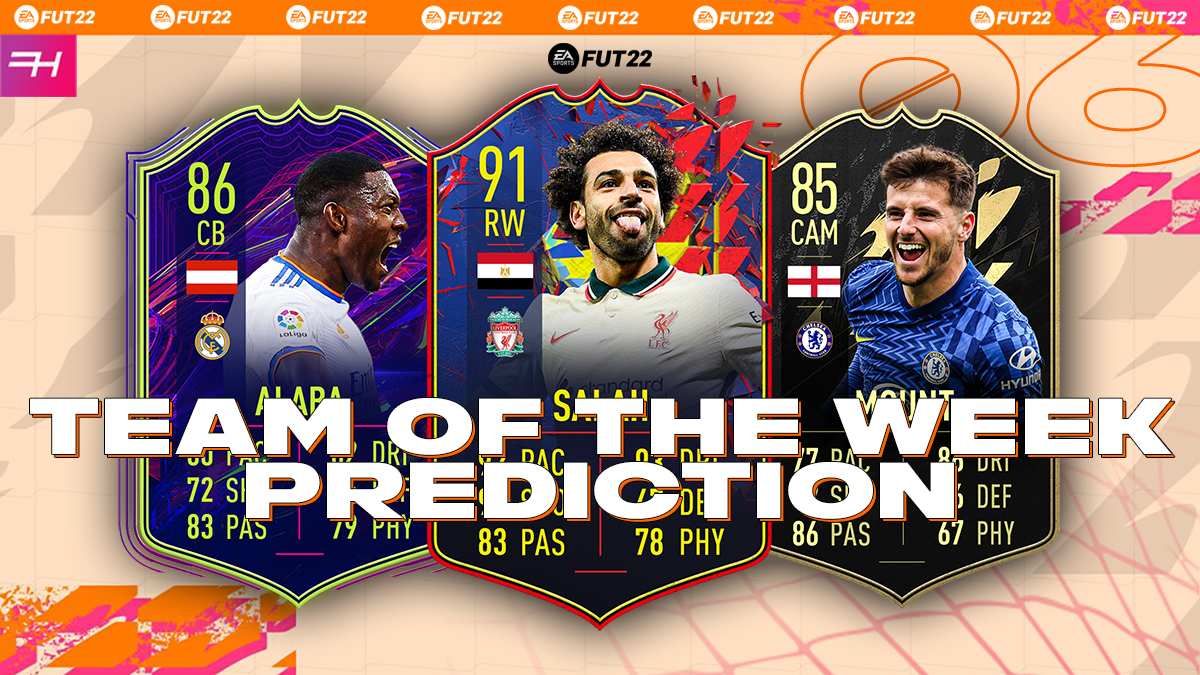 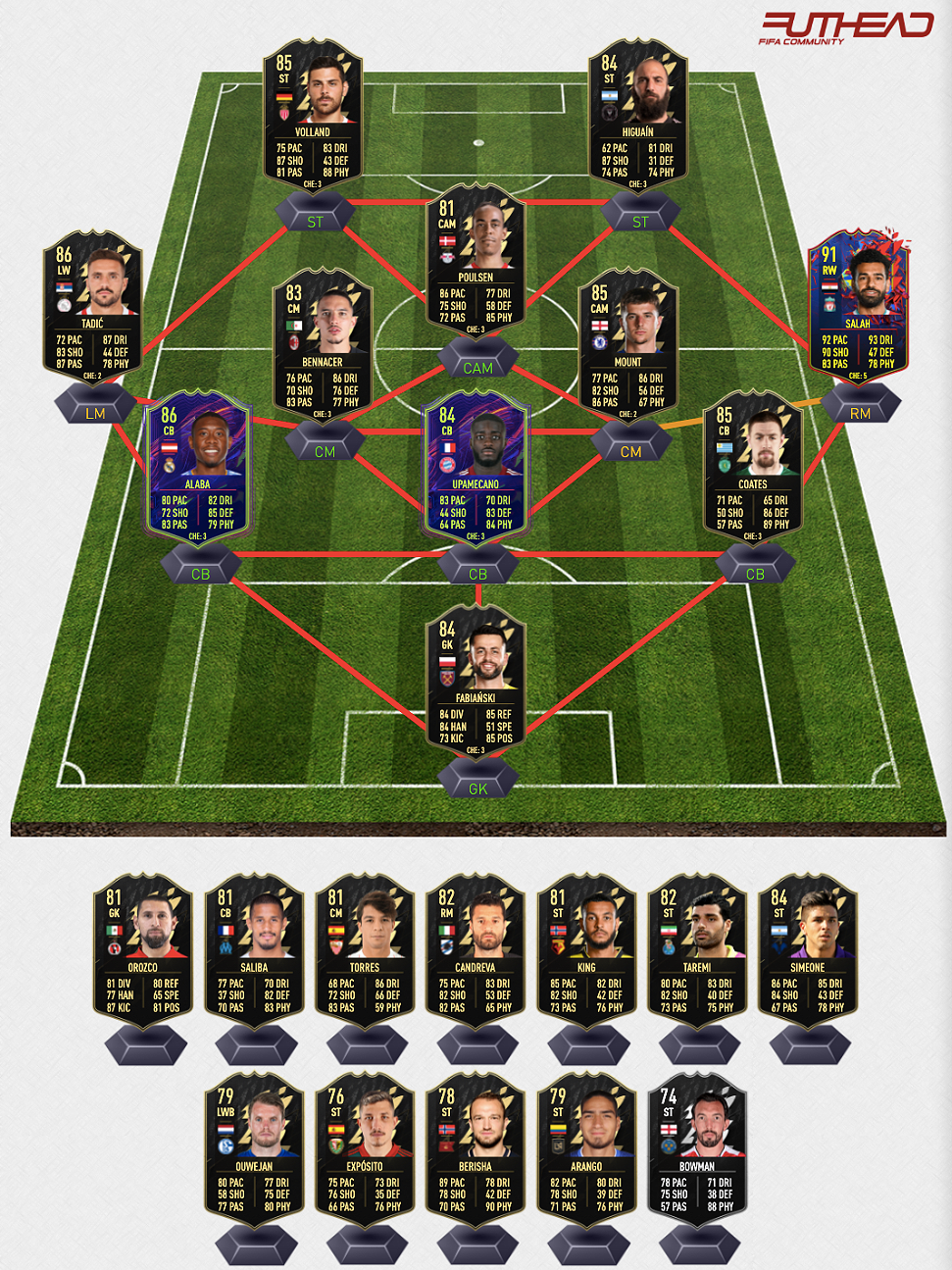 Fabianski GK – West Ham - 82 -> 84 Rated: Goalkeepers have been hard to predict this week with no standout performances so I'm going to take a bit of punt here. West Ham leapfrogged rivals Tottenham into the Premier League's top four as Michail Antonio fired them to victory in this London Derby. Fabianski made a superb save to deny Kane's first-half header and was equal to everything else which came his way.

D. Alaba CB – Real Madrid - 84 -> 86 Rated: Real Madrid came away from Camp Nou with a 2-1 win over Barcelona in Sunday afternoon's El Clasico, moving Los Blancos back to the top of the table. Alaba made his El Clasico debut and what a debut it was! Madrid's summer signing was top-notch at both ends of the pitch. Rock-solid in defence and scored the opening goal with a wondrous effort after he stole the ball off of Memphis before sprinting 90 yards up the field to bullet the ball past Ter Stegen. Also, had a decisive block in the box on an Ansu Fati shot in the first half and should get his upgrade on Wednesday.

D. Upamecano CB – Bayern - 82 -> 84 Rated: Bayern Munich remain top of the Bundesliga courtesy of a 4-0 home win over Hoffenheim on Saturday and made it three wins in a row after the international break. It was an all-action display by Upamecano, who was no-nonsense in his performance at the back, winning each of his six duels he contested. Barely ever lost the ball when playing out from the back while also playing a couple of key passes. Also mananged to grab the assist for the goals scored by Choupo-Moting and Coman and I would be very surprised to not see him in TOTW on Wednesday.

S. Coates CB – Sporting CP - 83 -> 85 Rated: Sporting CP kept pace with league leader Benfica after they defeated Moreirense 1-0 at home. The only goal came from Sebastian Coates and we should see him picking up an inform on Wednesday.

Bennacer CM – Milan - 80 -> 83 Rated: AC Milan left it late to steal all three points against Bologna who remained defiant despite going down to nine men, and continued their unbeaten run in the Serie A. The star of the night, Bennacer ran the midfield and was a constant source of inspiration for his side. He stepped up late not just to retain Milan's lead but also provided the assist for Ibrahimovic's clincher in stoppage time.

M. Mount CAM – Chelsea - 83 -> 85 Rated: Top of the table Chelsea welcomed bottom of the table Norwich to Stamford Bridge and went on to win by a scoreline of 7-0 which was the first time after 11 years that the Blues have scored seven goals in a single match. Mount's performance deserved every bit of applause. The young English midfielder scored his first hat-trick for Chelsea, one he will never forget. From the start until the end, Mount was energetic, accurate with his passing and precisewith his finishing. To add to that, he also assisted James' goal and absolutely deserved the MOTM award.

Y.Poulsen CAM – RB Leipzig - 77 -> 81 Rated: Trailing at half-time, Jesse Marsch introduced Yussuf Poulsen to dramatic effect as RB Leipzig came from behind to beat Greuther Fürth 4-1 at the Red Bull Arena on Saturday. Bundesliga options are short this week when it comes to gold players and thus I'm including Poulsen who scored a goal and assisted another for his side. The other option could be Szoboszlai but with Poulsen picking up a 1.5 and MOTM from Kicker he's the first option.

Tadic LW – Ajax - 84 -> 86 Rated: Ajax got their revenge for the painful defeat in the Johan Cruijff Schaal against PSV. In Amsterdam, Ajax hammered PSV Eindhoven 5-0 to extend their lead at the top of the table. Once again Tadic was involved in some goals, he scored one and assisted anothe two, and I'm now predicting him to be in for the third time after he picked up MOTM.

Salah RW – Liverpool - 90 -> 91 Rated: Liverpool demlolished an absymal Manchester United on Sunday to secure a 5-0 derby victory and go within one point of Premier League leaders Chelsea. There's not much to say about Mo Salah, who surely is the best player in world football at the moment. It was another complete performance that included a continuation of his unbelievable goalscoring record. His three goals saw him score for the tenth straight game, he became the first Liverpool player to net three games in a row at Old Trafford and on top of that, he became the Premier League's all-time record African goalscorer which is the reason I think he'll get a Record Breaker item on Wednesday.

K. Volland ST – Monaco - 83 -> 85 Rated: Victrious at PSV Eindhoven in the UEFA Europa League on Thursday, the Principality club backed that up with another fine result as they defeated Montpellier 3-1 at Stade Lous II. The scorer of 16 goals last season, Volland has finally hit form this campaign. One goal and an assist to his name should see him being inlcuded in TOTW6 on Wednesday.

G. Higuain ST – Inter Miami - 81-> 84 Rated: Inter Miami recorded their second win in a row after they beat Cinncinato FC 5-1 at home in convincing style. 33-years old forward Gonzalo Higuain put his name on the scoresheet this game with scoring one and assisting two others and stands a chance to pick up an inform on Wednesday which would end up being fodder like most of the informs so far.

Orozco GK – Tijuana - 75 -> 81 Rated: I have doubts that we'll see a Liga MX goalkeeper make it back 2 back Informs but with no real standout performances I'm taking the punt on Orozco. Bottom of the table side Club Tijuana recorded a point after their goalless draw against CD Guadalajara thanks to their shot-stopper Orozco who made a total of six saves who was awarded MOTM.

W. Saliba CB – Marseille - 75 -> 81 Rated: The 101st Le Classique in France this Sunday saw Paris Saint-Germain and Marseille play out a goalless draw at Stade Velodrome. Both of Marseille's center-backs had a good game and although Caleta-Car was the one who made it into L'Equipe's TOTW I'M picking Saliba who was a revelation for Marseille, using the ball excellently and then making a late tackle on Mbappé, which potentially denied PSG a win.

O. Torres CAM – Sevilla FC - 77 -> 81 Rated: An absolute goalscoring festival happened between Sevilla and Levante on Sunday where Sevilla got the better outcome and took all three points in an entertaining 5-3 win. The goals were scored by five different players but the only one who also got an assist was Oliver Torres and got awarded MOTM.

Candreva RM – Sampdoria - 79 -> 82 Rated: Both Sampdoria and Spezia were only seperated by one point ahead of the local derby in Liguria and Sampdoria got the better outcome of the game as they took all three points with a narrow 2-1 win. Antonio Candreva was the star of the show in the first half as he curled a free-kick towards goal and Gyasi send it towards his own net before then doubling his side's lead with a neat finish from the left. Gazzetta awarded him with an 8 match rating and MOTM and although he technically just got one goal I think he stands a chance to be featured.

Simeone ST – Hellas Verona - 75 -> 84 Rated: Hellas Verona absolutely shocked Lazio Roma in Serie A as they took all three points at home with a stunning 4-1 win. There have been a lot of hat-tricks this week but Simeone topped it by scoring all four goals for his side, picking up a huge 9 from Gazzetta and thus is my pick for a Featured TOTW on Wednesday.

Taremi ST – Porto - 79 -> 82 Rated: FC Porto remains second in the table, level on points with Sporting CP after they secured all three points away against Tondela. Taremi was the main man this day as he scored all three goals and should be in on Wednesday.

J. King ST – Watford - 75 -> 81 Rated: Watford came from behind twice to thump Everton 5-2 at Goodison Park and earn Claudio Raniere his first win as Hornets boss. Player of the match was the Norwegian Joshua King wo scored an outstanding hat-trick to help Watford get an incredible comeback win.

Ouwejan LWB – Schalke 04 - 72 -> 79 Rated: I usually would have inlcuded all the players with a hat-trick scored the past weekend but we saw in the past that EA likes to include at least a defender or midfielder and therefore I'm including Ouwejan from Schalke 04 who scored one goal and assisted the other two in his side's 3-0 home win against Dynamo Dresden.

V. Berisha ST – Viking FK - 70 -> 78 Rated: Viking remains third in the Eliteserien table after they took all three points with a clear 5-1 win against Lillestrom. Veton Berisha scored three of the five goals for his side and should be a no-brainer for TOTW6.

E. Exposito ST – Slask Wroclaw - 67 -> 76 Rated: There have been a lot of hat-tricks the past weekend, especially for players who are silver rated. One of them came from the former Las Palmas forward Exposito who netted three times in Slask Wroclaw's 5-0 win against Wisla.

Bowman ST – Shrewsbury - 64 -> 74 Rated: Shrewsbury Town's return to Montgomery Waters Meadow was a memorable afternoon as they secured an emphatic 4-1 win over Cambridge United. Despite Cambridge pulling level in the second half they couldn't defend Ryan Bowman who ended the game with a hat-trick and an assist to help his side securing all three points.

Arango ST – LAFC - 72 -> 79 Rated: The Colombian forward was the catalyst behind LAFC's comeback win, which kept them within touching distance of the Western Conference's Audi MLS Cup Playoff places with four regular-season games remaining and he has been named Week 31's MLS POTW after exploding for a hat-trick for his side.