FIFA22 Team of the Week 4 Predictions

Published on by Simpleblue 30 Comments Updated on 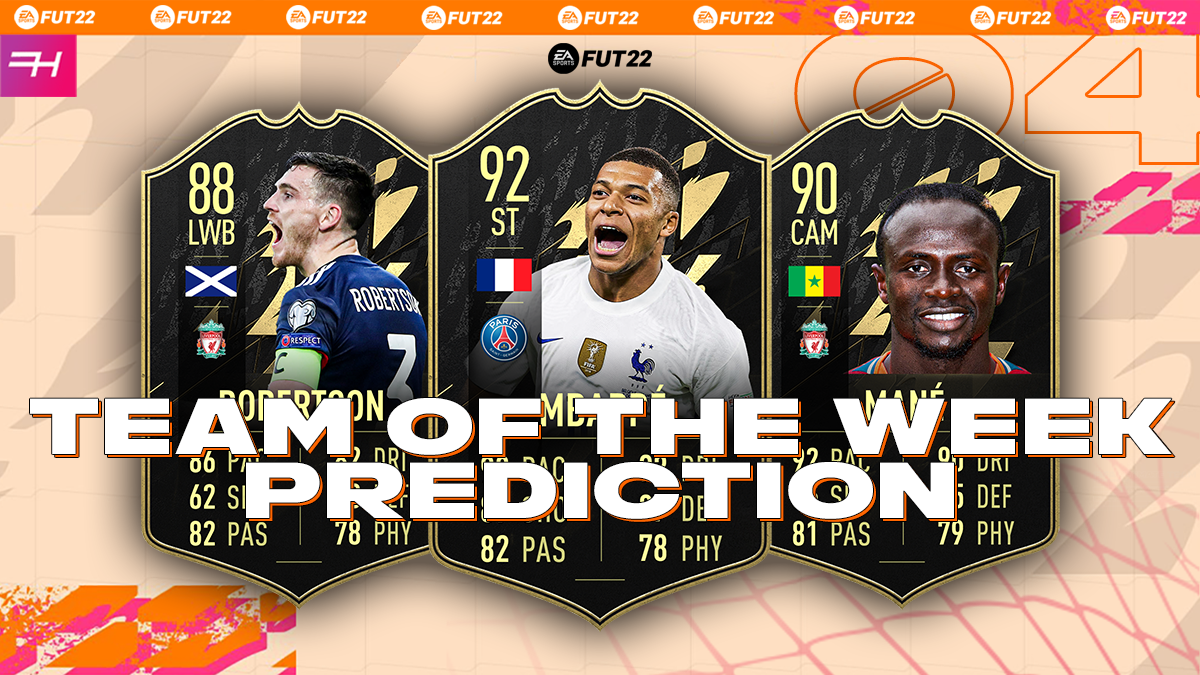 K. Navas GK – Paris SG - 88 -> 89 Rated: We're starting with probably the hardest position to chose this week with goalkeepers not being exceptional good overall. There are just a few gold goalkeepers who have done well and one of them was Paris SG's shot-stopper Keylor Navas who made a total of 5 saves in his side' 0-0 draw against Honduras. Another option for the starting GK is Emi Martinez who had a really strong game against Uruguay.

A. Robertson LWB – Liverpool - 87 -> 88 Rated: Scotland took a huge step towards the World Cup in Qatar next year with a last gasp winner against Israel to send Hampden bezerk. The Home side bounced back from a disappointing first half to take all three points in the dying minutes in the game. The captain started slowly but then cruised through the gears. He played a major part with the ball into the box for McGinn's goal, provided the assist for Dykes' equaliser and almost laid on third for Christie.

J. Gvardiol CB – RB Leipzig - 75 -> 84 Rated: Do we need more overpowered, pacy Bundesliga centre-backs? Probably not but maybe it's unevitable. Croatia stayed on course to qualify automatically for the 2022 World Cup after the 2018 runners-up beat Cyprus 3-0 in their Group H qualifiers on Friday. That being said, one of the three goals came from Leipzig's summer signing Gvardiol who was left unmarked at the far post to steer the ball home 10 minutes before the final whistle for his first international goal.

J. Maehle LB – Bergamo Calcio - 77 -> 81 Rated: In Group F, Denmark's 4-0 win in Moldova maintained the only 100% record in these European Qualifiers and means they can qualify with a win against Austria on Tuesday. There's no clear standout in this game so I'm opting for Atalanta's Maehle who managed to score a goal from the left-back position.

De Paul CM – A. Madrid - 82 -> 84 Rated: Argentina sailed past Uruguay 3-0 in the 2022 FIFA World Cup qualifiers to take another massive step towards the Qatar showpiece. I fully expect one to be featured on Wednesday and one of the options could be De Paul who showed one of his best performances for the Sky Blues so far. He doubled Argentina's advantage with a composed finish beyond Muslera, and offered plenty of creativity, making five key passes and could have had two more assists if Lautaro and Lo Celso would have converted properly.

S. Mané CAM – Liverpool FC - 89 -> 90 Rated: Senegal maintained their 100& record in Group H after trashing visitors Namibia 4-1, as the Terenga Lions grabbed their third win in as many games. Sadio Mané once again was the star of the show for his side, scoring a beautiful solo goal and assisting another two. The most exciting about his inform is his position change to CAM which offers a lot more possibilities for squad building.

R. Mahrez RM – Manchester City - 86 -> 87 Rated: Algeria moved on top of Group A in the qualifiers for the 2022 FIFA World Cup after they picked up all three points with a 6-1 against Niger. Despite Niger's positive start to the game, they found themselves trailing after 27 minutes and it was courtesy of a sensational Mahrez free-kick struck from 35 yards out. Mahrez then completed his brace in the second half from the penalty spot and more or less gave the assist for his side's fourth goal when Souleymane turned the ball into his own net as he tried to cut away a Mahrez cross.

Raphinha RW – Leeds United - 82 -> 84 Rated: Brazil maintained their 100% record in the 2022 World Cup qualifiers after they fought back from a goal down, scoring three times in the second half for a 3-1 win over Venezuela. Venezuela took the early lead through Eric Ramirez and rose their hopes to beat Brazil in a World Cup qualifier for the first time in 17 attempts but Marquinhos put his side back on level terms. Marquinhos could be an option for an Inform too but Raphinha had quiet an incluence after he got subbed on, assisting the equaliser and the third goal in stoppage time and could see himself picking up an Inform on Wednesday.

J. Sancho LW – Manchester Utd - 87 -> 88 Rated: Another national side moving closer to the 2022 World Cup is England after comfortably beating minnows Andorra with 5-0 on Saturday night. Phil Foden picked up MOTM but with him currently being in TOTW he'S ruled out and thus I'm picking Sancho. Sancho created the opener with a good run and even better awareness, the first of two assists as he went on to torment the Andorra defence. His inform would be a position change to LW, his OTW won't change the position!

M. Depay ST – Barcelona - 85 -> 86 Rated: The Netherlands have all but secured their place at the 2022 FIFA World Cup after beating Gibraltar 6-0 on matchday eight on Monday evening and a big part of it was Depay. You can now argue it was against Gibraltar (no disrespect) but two goals and two assists are just too good to not include him.

K. Mbappé ST – Paris SG - 91-> 92 Rated: In a thrilling night of football, France came from 2-0 down to beat Belgium 2-3 in the second Nations League semi-final. Theo Hernandez scored the late winner for France but Mbappé was the clear standout in this game, he ran the show for France when they were in the ascendancy. His pace looked like being a threat all night but he exploded after half-time and ripped the Belgian defence to bits. Created Benzema's goal with a nice assist, then burried the penalty with supreme confidence to level for the French. Deservedly picked up the UEFA Man of the Match award, an 8/10 match rating from L'Equipe and showed why Real Madrid are desperate to sign him. Not as good in the final against Spain but still managed to bag another goal & assist which should be enough to get in.

D. Ospina GK – Napoli - 79 -> 82 Rated: I've mentioned it earlier that the options for gold goalkeepers this week are very rare so it took a while to find a candidate. I ended up picking David Ospina who kept clean sheets in both of their qualfication games. What makes it a bit more likely he could be included is the fact that Colombia drew both of their games against Uruguay and Brazil and Ospina managed to make a couple of important saves to secure points for his side.

T. Kedziora CB – Dynamo Kyiv - 75 -> 81 Rated: Defenders have been quite a bit hard to select this week simply due to the fact that there's no one with more than one goal when it comes to lower rated players and one of them I've selected is Polish international Kedziora who scored one goal in his side's 5-0 win against San Marino.

Wu Lei RM – RCD Espanyol - 75 -> 81 Rated: Vietnam suffered their third loss in the final World Cup qualification round as China scored in the last minute to set the score 2-3 on Friday. Espanyol's striker Wu Lei was involved in all three goals with scoring two and basically assisting the opener after his shot got saved from the Vietnam goalkeeper and Zhang Yuning just had to quick tap-in.

E. Valencia LM – Fenerbahce - 75 -> 81 Rated: Ecuador showed no mercy against Bolivia and clinched a 3-0 victory at the Estadio Monumental Banco Pichincha in a match for the 11th round of the 2022 South American World Cup qualifiers and kept their hopes of qualifying for the 2022 World Cup alive. Captain Enner Valencia was the main man in this game with scoring twice early in the game to seal the victory for his side.

Choupo-Moting CAM – Bayern München - 76 -> 81 Rated: Cameroon cemented their second spot in Group D of the 2022 FIFA World Cup qualifiers after a 3-1 victory over Mozambique in Douala and moved to six points, one behind group leaders Cote d'Ivoire. Bayern Munich's forward Choupo-Moting had been the biggest threat all evening and scored two of the three goals for his side with both being brilliant headers.

R. Yaremchuk ST – SL Benfica - 77 -> 81 Rated: Ukraine recorded an important 1-2 away win in Finland which could prove huge if Ukraine wins their next fixture against Bosnia and Herzegovina. Yaremchuk was involved in both of his side's goals, first assisting the early opener for Yarmolenko and then again put his side 2-1 in front after Pukki equalised.

F. Torres CF – Manchester City - 82 -> 84 Rated: Spain got revenge for Euro 2020 by beating Italy 2-1 in the UEFA Nations League semi-final and brought an end to Italy's 37-game unbeaten performance. Ferran Torres was back on his striker groove and cannot stop scoring at the moment. Great run and instinctive finish to open the scoring before adding another goal to his name with yet another clinical strike on the cusp of half-time. Had to come off with an injury early in the second period but his performance was enough to pick up the official UEFA Man of the Match award. His position change from RW to CF makes him looking like a really interesting and more useable card.

S. Lovric CAM – Lugano FC - 71 -> 78 Rated: A game which definetly should provide an Inform was the fixture between Malta and Slovenia. Slovenia kept their slim hopes of a World Cup qualification alive after they took all three points with a 0-4 win against Malta. There are two serious candidates for an Inform, one of them is FC Lugano's Lovric who assisted three of the goals for his side on his debut.

F. Cernych CAM – Jagiellonia - 66 -> 76 Rated: Even though Lithuania is very likely to miss out on the Qualification for the 2022 World Cup we might see an inform on Wednesday. Lithuania recorded their first win in the qualification with a 3-1 win over Bulgaria and Cernych scored two of the three goals for his side.

C. Robinson CAM – West Brom - 73 -> 79 Rated: At the 13th attempt, Stephen Kenny finaly has his first competitive win as Ireland manager and it was an excellent performance from the team in Azerbaijan with a 3-0 victory. Callum Robinson's early goal was a stunning finish, he was a nightmare for the opposition defence to deal with, coming close to doubling his tally with a volley in the 31st minute. He managed it a few minutes later when his long range effort managed to squeeze by the goalkeeper. With only one hat-trick from silvers this week two goals could see him being included in the side on Wednesday.

R. Castro ST – Cartagena FC - 69 -> 77 Rated: Apart from Qualifiers for the 2022 World Cup there have been a few smaller leagues in action last week from where we could see one or two informs. One of them should be Ruben Castro who scored two goals and assisted another as Cartagena trashed UD Ibiza 5-1.

I. Kone ST – Sarpsborg 08 - 61 -> 71 Rated: Mali remains unbeaten in Group E and now moved top of the group as Les Aigles soared over Harambee Stars with an affirming 5-0 victory in Agadir in their third qualification match for the 2022 FIFA World Cup. Ibrahima Kone was the toast of the Malian side, scoring a hat-trick and adding an asssist to his game.