FIFA22 Team of the Week 3 Predictions

Published on by Simpleblue 24 Comments Updated on 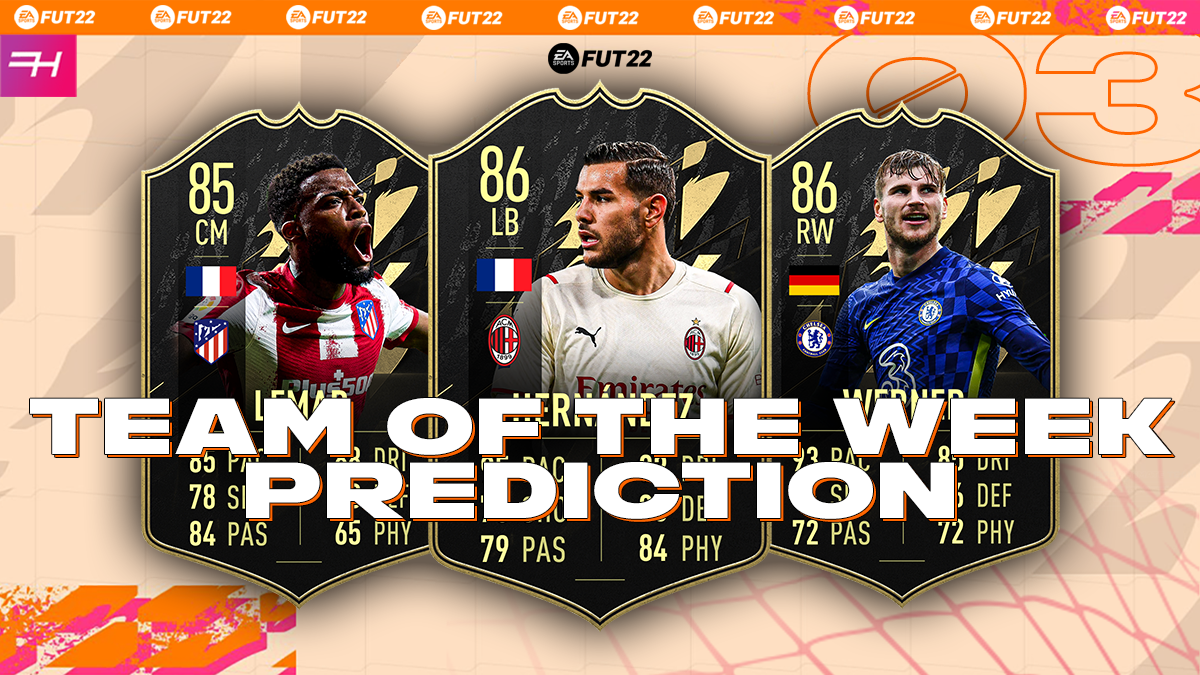 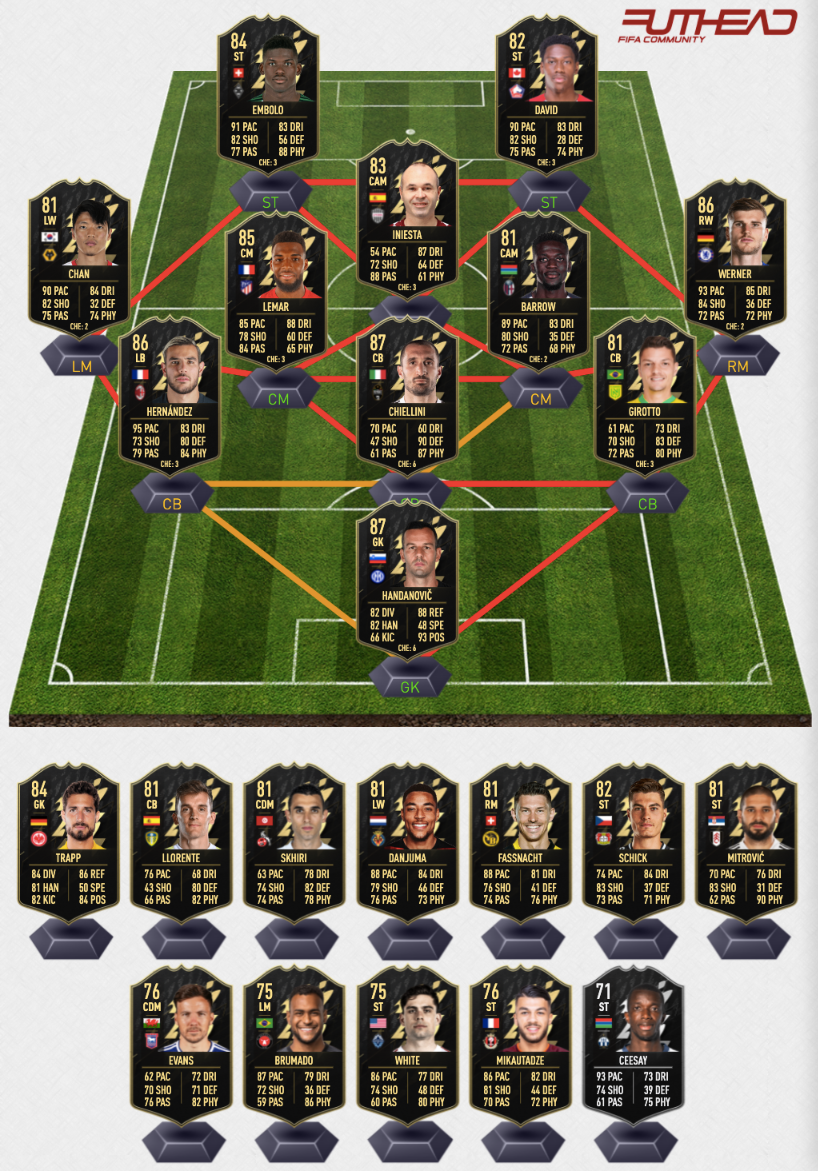 S. Handanovic GK – Inter - 86 -> 87 Rated: Inter recorded their fifth win in the Serie A this season after staging a comeback win away against Sassuolo at the Mapei Stadium, winning 2-1. Handanovic was a extremely lucky not to see red for his harsh challenge on Defrel but apart from that he was brilliant, the came could have gotten out of Inter's hands had it not been for him. Made an unbelievable save to deny Berardi's volley, then as said risked getting send off after flying out of his goal and colliding with Defrel but made amends with a stunning double save in the second half to secure all three points for his side.

T. Hernandez LB – AC Milan - 84 -> 86 Rated: AC Milan secured an important win against Atalanta on Sunday evening and even though the final score was 2-3, the Rossoneri had a rather comfortable evening. Tonali was MOTM in this game but with the high amount of midfielders and in contrast, the less amount of higher rated defenders this week, I'm once again including Hernandez. The Frenchman did very well on the left-hand side as he burst forward several times. He almost got the assist for the first goal but did get the assist for the third and was important as always for his side, picking up a 7.5 match rating from Gazzetta.

G. Chiellini CB – Piemonte Calcio - 86 -> 87 Rated: The famous Derby della Mole took place on Saturday evening and Juventus defeated Torino 1-0 in a hard-fought game that continues the Bianconeri's return to form. The former Sassuolo midfielder Locatelli was the one scoring the winning goal but I don't think one goal is enough this week to be included so I'm taking the punt here going with Chiellini. Despite his age, the Juventus captain was once again a rock at the back, winning the vast majority of his air duels and produced a stunning interception on Lukic who was heading towards goal, helping his side to secure all three points and also keeping a clean sheet for the first time in 20 games. Both him and Locatelli picked up a 7 match rating from Gazzetta and under normal circumstances I wouldn't considered Chiellini but it was quite a big game and options for higher rated defenders this week are short.

A. Girotto CB – Nantes FC - 75 -> 81 Rated: As I said above, options for higher rated defenders are short but you usually can always count on Ligue 1 and L'Equipe when it comes to selection them. Nantes took all three points with a solid 2-0 win against Troyes at home and the Brazilian central defender Girotto scored the opener for his side, picking up a 7 match rating from L'Equipe which often was enough for a player to make it into the side. Not a useable card but for sure good fodder for future SBCs.

T. Lemar CM – A. Madrid - 83 -> 85‚ Rated: We had a few top matches the past weekend, one of them was Atletico against Barcelona and we can most likely expect an inform from it. Diego Simeone's side coasted to a 2-0 victory against Barcelona at the Wanda Metropolitano and barely broke a sweat. Thomas Lemar arguably enjoyed his best performance in an Atletico Madrid shirt against Barcelona. Crucial in putting the visitors to the sword, surging forward to add a body in attack as Felix pulled defenders out of position. Made his intelligent display count by, firstly, emphatically finishing to open the scoring and, secondly, providing a brillant assist for Suarez do double the lead and seal all three points. An interesting potential inform with his position change to CM.

A. Iniesta CAM – Vissel Kobe - 80 -> 83 Rated: A new Fifa, a new Andés Iniesta inform inbound. That being said, Vissel Kobe hammered Urawa Red Diamonds 5-1 and despite his age Iniesta once again showed his class, scoring two goals and assisting another one. Not the most playable card but definetly an iconic one.

M. Barrow CAM – Bologna - 76 -> 81 Rated: Bologna played Lazio in a trhilling encounter at Renato Dall'Ara Stadium which ended in favour of Bologna. It was a firece competition thorughout the 90 minutes but the domincance was visible effectively by the Bologna players. Musa Barrow provided a wonderful start to Bologna as they managed to get their opening goal in just the 14th minute of the match and then assisted the other two goals aswell. Gazzetta awarded him with an 8/10 match rating and MOTM, should be a cheap good card to use as a sub.

T. Werner RW – Chelsea - 84 -> 86 Rated: Diasappointing back-to-back defeat against Man City and Juventus in the past week were exorcised in suitable fashion as the Blues controlled proceedings for virtually the span of the match and picked up a narrow 21 win over Southampton. Werner's performance is what you call „working one's socks off“. Attacked the spaces behind brilliantly and after being cruelly denied a goal by VAR, he popped up in the right position when it mattered to prod home and seal a hard-earned victory. He could have had more than just one goal and this is a bit of a punt but we saw last week that G. Jesus got the inform for one goal so let's see what happens.

Hwang Hee-Chan LW – Wolverhampton - 75 -> 81 Rated: Wolverhampton Wanderers moved into tenth place in the Premier League table on Saturday afternoon, clinching a 2-1 victory over relegation-threatened Newcastle United at Molineux. Hwang Hee-Chan might not be the most technically gifted of Wolves' forwards, but he proved to be an outstanding finisher, scoring both goals and also combining well spectacularly with Jimenez. Man of the Match and a 9/10 match rating for him should at least give him his inform on Wednesday.

J. David ST – Lille - 78 -> 82 Rated: Lille recorded their third straight top-flight triumph with a 2-0 win over Olympique Marseille. David was left out last week which might have been due to his one goal being a penalty but he should be in this week as it was a top match and mainly for the fact that the Canadian international scored both goals for his side and maintained his red-hot scoring streak.

B. Embolo ST – M'gladbach - 77-> 84 Rated: Borussia Mönchengladbach continued their good run against the league top teams and earned a 3-1 win against Wolfburg, ending their run of unbeaten games. It was Gladbach's first Bundesliga win in Wolfsburg since November 2003 and it was Swiss Interantional Breel Embolo who opened the scoring just after five minutes, pulling out an overhead kick and finishing from a couple of yards out. He then setted up Hofmann to double the lead just 90 seconds later and was a constant threat for Wolfsburg's defenders, deservedly awarded with MOTM from Kicker and also my pick for a featured TOTW.

K. Trapp GK – Frankfurt - 82 -> 84 Rated: Having put five past Frankfurt in each of their last three visits to the Allianz Arena, Bayern failed to continue this trend as Frankfurt surprisingly grabbed their first Bundesliga win of the season in a smash-and-grab 2-1 victory. The one player being the main reason for this victory was Frankfurt's shot-stopper Kevin Trapp who made a total of 10 saves, including a lot crucial and important ones like his uncredible save in the 91st minute to deny Lewandowski from scoring the equaliser. Kicker awarded him with a perfect 1 match rating and POTW.

D. Llorente CB – Leeds United - 77 -> 81 Rated: Leeds United held on to a 1-0 lead against Watford to secure an overdue first Premier League win of the season after dominating the game. The game-winning goal came from Diego Llorente wh also launched attacks from deep, got the team moving forward and comfortably nullified Josh King before his withdrawal.

Skhiri CDM – 1. FC Köln - 77 -> 81 Rated: Cologne extended their unbeaten run to five consecutive Bundesliga games after coming from behind to defeat Greuther Fürth 3-1 in the opening fixture of Matchday 7 on Friday. Tunisian International Ellyes Skhiri was not only present when countering Fürth's attempts to attack, he also scored twice and deservedly picked up MOTM for his performance. Third TOTW and probably already two Cologne Informs, good first weeks of Fifa for their supporters.

Danjuma LM – Villareal CF - 76 -> 81 Rated: A really overpowered looking inform could come in the name of Danjuma. Villareal faced Real Betis and took all three points with a really impressive performance. The Danjuma-Yeremy duo in attack had a number of chances during the game and it was the Dutchman who scored both of the goals.

Fassnacht RM – BSC Young Boys - 75 -> 81 Rated: There have been a really big amount of hat-tricks this week to choose from, most of them coming from silvers tho. One who also scored a hat-trick but who's base card is gold is Fassnacht from Young Boys. His side easily hammered Servette Genf 6-0 and with him being gold and scoring three of the six goals, he should be a guaranteed inform on Wednesday.

P. Schick ST – Leverkusen - 79 -> 82 Rated: Leverkusen moved level on 16 points with Bayern Munich at the Bundesliga summit thanks to a comprehensive 4-0 win away at Arminia Bielefeld on Sunday. Patrik Schick, who impressed during the Euros, seems to have finally found his goal scoring abilities in Leverkusen as he netted twice and took his goal tally to six for the season. Kicker awarded him with a 1 match rating an MOTM, an inform should be nearly guaranteed.

Mitrovic ST – Fulham - 75 -> 81 Rated: Fulham climbed third in the standings after they defeated Swansea 3-1 mid-week and it was Mitrovic who exposed Swansea's deficiencies ruthlessly with scoring all three goals for his side, making it 10 goals in nine club games in 2021-22 now.

Lee Evans CDM – Ipswich - 68 -> 76 Rated: The lower English leagues had a matchday mid-week and we will most likely see an inform coming from Ipswich Town's humilating 6-0 against Doncaster Rovers. Midfielder Lee Evans was without a doubt the star of the show, scoring his first career hat-trick and also adding an assist to his excellent display.

J. Brumado LM – FC Midtjylland - 65 -> 75 Rated: It's the week of hat-tricks in everyone's prediction and one who could find his way into TOTW on Wednesday is Brumado. The Brazilian scored three of the four goals for his side in Midtjylland's 4-0 win against AGF.

Mikautadze ST – RFC Seraing - 68 -> 76 Rated: Next up in my prediciton is another player who scored a hat-trick on the weekend. RFC Seraing won their fixture against Zulte Waregem pretty comfortable with 5-1 and Frenchman Mikautadze scored three times, securing his spot in TOTW.

B. White ST – Whitecaps FC - 65 -> 75 Rated: Vancouver got an important win at home, 3-0 Saturday night over the San Jose Earthquakes in a matchup of two teams trying to climb into postseason contention in MLS Western Conference, thanks to three goals from Brian White.

A. Ceesay ST – Zürich FC - 61 -> 71 Rated: Now coming to the last player in my prediction and it's not a player who scored three goals, it was even better. FC Zürich recorded an impressive 6-2 win against FC Sion on Sunday and forward Ceesay absolutely stood out with scoring four goals and assisting another. It's a decent looking silver inform but really impossible to link so he should be cheap.