FIFA22 Team of the Week 2 Predictions

Published on by Simpleblue 30 Comments Updated on 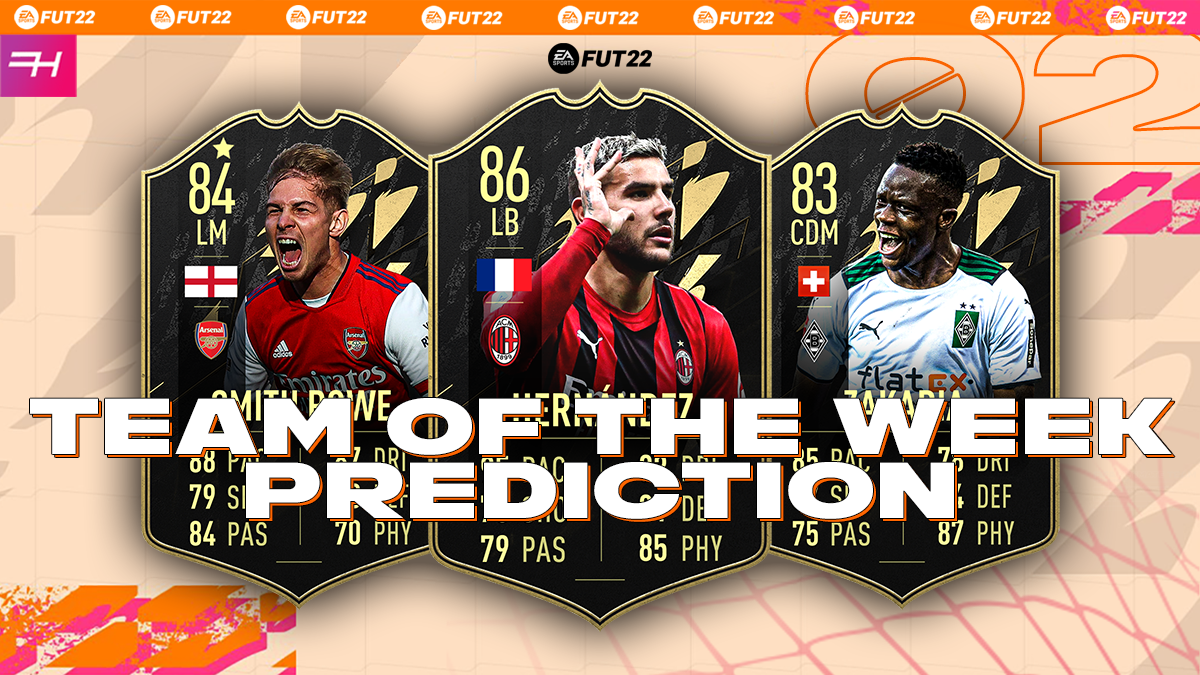 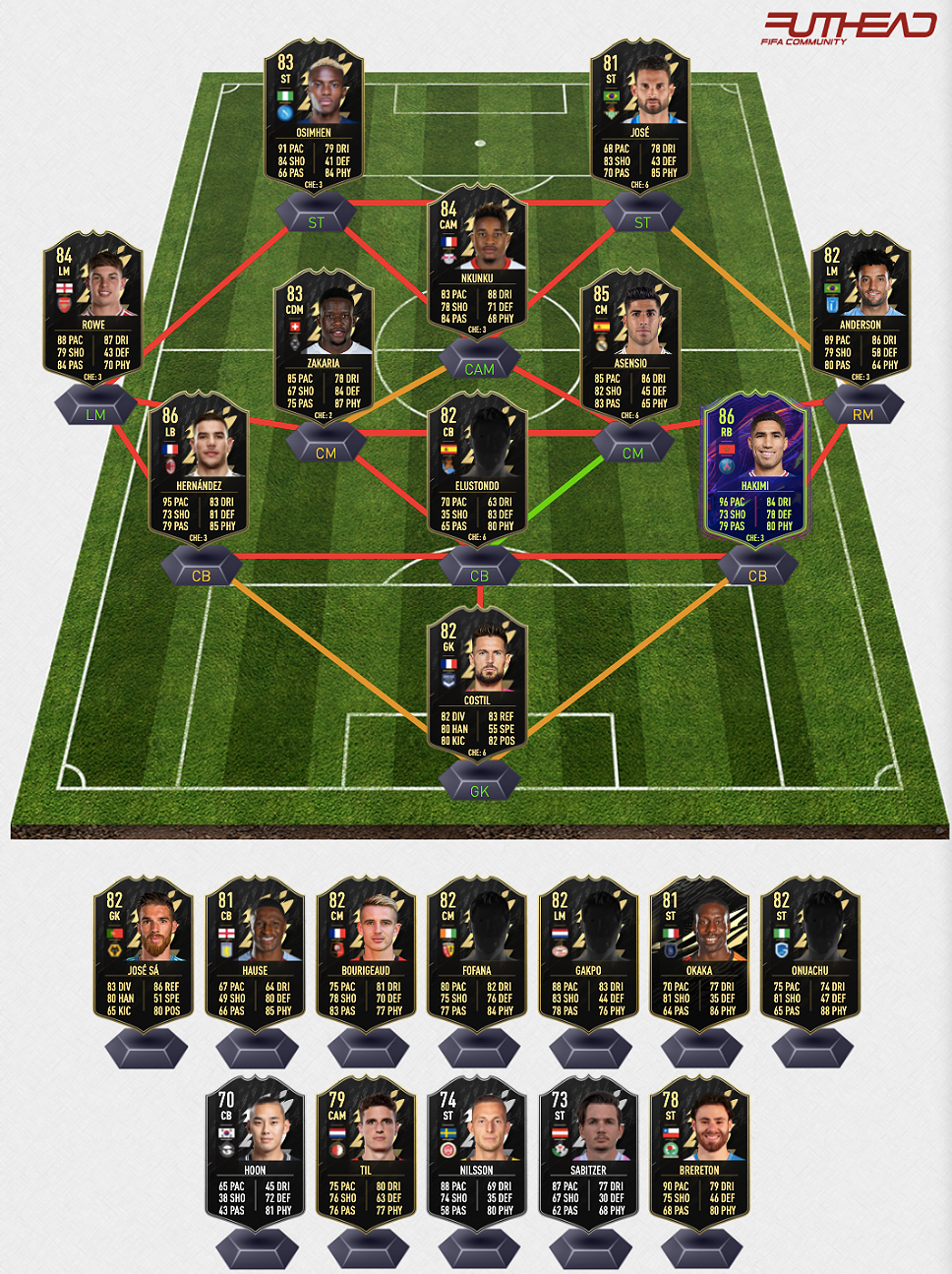 B. Costil GK – G. Bordeaux - 79 -> 82 Rated: A late Mexer goal cancelled out Laborde's opener as Girondins Bordeaux battled back to draw 1-1 with Stade Rennais FC. It was an absolutely oustanding performance from the Bordeaux goalkeeper. Mexer might have grabbed the headlines with his late equaliser, but that the game wasn't already beyond reach was down, almost single-handedly, to their shot stopper. With a total of 7 saves to keep his side in the game and an 8 match rating from L'Equipe, I can't see Costil missing out on an inform on Wednesday.

T. Hernandez LB – AC Milan - 84 -> 86 Rated: AC Milan got the job done mid-week as they managed to beat Venezia by two goals to nil. Theo Hernández wasn't starting but him coming on around the hour mark changed everything as his run in behind the defence was crucial when Bennacer picked him up. He was composed enough to find Brahim in the box and the second goal was even better, scoring with a thumping effort. He has established himself as one of the best full backs in the league and Gazzetta awarded him with a 7.5 match rating and MOTM, what a card it would be early in the game.

Aritz CB – Real Sociedad - 79 -> 82 Rated: It was a great night for la Real as the txuri urdin came away with the three points from the Nuevo Los Carmenes after beating Granada CF 3-2 in an intense match in which they didn't get off to the best start. It's not easy to come from 1-0 down but Sociedad showed character to do so thanks to two goals from Aritz Elustondo who helped his side securing the spoils.

A. Hakimi RB – Paris Saint-Germain - 85 -> 86 Rated: Paris Saint-Germain maintained their 100 per cent start to the Ligue 1 season by making it seven wins from seven at Metz on Wednesday, becoming only the second PSG side – and the fourth top-flight outfit ever – to record seven straight wins from the start of a Ligue 1 season. Both goals came from Hakimi, the second one which was the winning goal, with virtually the last kick of the game. The PSG full-back-turned-matchwinner already has three league goals this season, quite a return for anyone, let alone a defender.

D. Zakaria CDM – Borussia M'gladbach - 80 -> 83 Rated: It was a very special game in Germany's top-flight on Saturday evening with Marco Rose's return to Gladbach but it ended in disappointment for the new Dortmund coach. Gladbach took all three points in a thrilling game which lifted the Foals out of the relegation zone thanks to the goal from Denis Zakaria who overall had a good game and was rewarded with MOTM from Kicker. A really good and strong looking inform.

M. Asensio CM – Real Madrid - 83 -> 85 Rated: Real Madrid's season has mostly been about good second half performances that help them get past opponents, either with relative ease or by being as nervy as ever. This time around, we didn't have to see that, Madrid scored three goals in each half as they put six past Mallorca. It was a fantastic game from Asensio, scoring three goals, linked up with Benzema amazingly on two of them, while trying to set up his teammates for glory as well. It's either Benzema or Asensio who should get the inform on Wednesday but with Asensio being MOTM he is likely to be in, Benzema should be the only logic choice for La Liga's September Player of the Month.

C. Nkunku CAM – RB Leipzig - 81 -> 84 Rated: RB Leipzig doubled their tally for goals this season in a single game after putting six past Hertha Berlin, means Leipzig are unbeaten in their last eight Bundesliga meeting with the Old Lady. Star of the show was Christopher Nkunku who scored his first Bundesliga brace, assisted another goal and also won the penalty which Forsberg converted. A perfect 1 match rating from Kicker and POTW should see him picking up his first inform on Wednesday.

F. Anderson RW – Latium - 78 -> 82 Rated: Lazio secured a 3-2 win against AS Roma in what turned out to be a thrilling encounter in Serie A on Sunday. Games like this usually provide an inform and I'm going with the Brazilian attacker Felipe Anderson who got himself involved in two of the three goals with scoring the what turned out to be the winner and assisting another.

E. Smith Rowe LM – Arsenal - 76 -> 84 Rated: Arsenal blew Tottenham away in the first half at the Emirates Stadium on Sunday afternoon as they cruised to a 3-1 victory in the first north London derby of the 21/22 season. There are two serious options for an inform with Saka and Smith Rowe but I'm picking Smith Rowe who was at the heart of Arsenal's attacks, showed great instincts when arriving late into the box to tuck home Saka's cut-back in stride for the openern and assisted Aubameyang for his side's second goal. Both Saka and Smith Rowe had a MOTM performance and it's a 50/50 pick but for me it's Smith Rowe who also is likely to be in as a FTOTW item which would make his card more useable with the double upgrade.

V. Osimhen ST – Napoli - 80 -> 83 Rated: Napoli continued their excellent form as they defeated Sampdoria by 4-0 at the Stadio Luigi Ferraris on Thursday and setted their sights on the top of the table. Osimhen was the start of the show. The opposition's defense couldn't cope with his devastating pace and his clever runs into the box allowed him to score two goals on what seemed like a field day for him. Gazzetta awarded him with an 8 match rating and MOTM, his potential inform could have more dribbling but it's still a decent card for the start of the game.

Willian José ST – Betis Sevilla - 80-> 83 Rated: To be honest, there have been quiet a lot gold strikers who scored two goals the past matchday but Willian José is one of the few who also got a decent match rating. Betis Sevilla recorded an important 2-0 win against a Getafe side which not lost all of their seven opening games thanks to two goals from José. It's definetly not the most appealing inform but one for SBC's later on in the game.

Jose Sá GK – Wolverhampton - 79 -> 82 Rated: Wolverhampton secured just their second win of the Premier League season with a narrow 1-0 victory at St Mary's, condemning Southampton to a sixth straight league game without a win. The Portuguese keeper probably had his best game ina Wolves shirt. He made a handful of important saves to keep his clean sheet and even set up Jimenez's match-winning strike with an excellent pass.

K. Hause CB – Aston Villa - 75 -> 81 Rated: Aston Villa hung onto a precious and rare win at Old Trafford for the first time in 12 years with a narrow 1-0 win. On the back of a solid showing against Chelsea in the midweek cup fixture, Hause earned a start and the 26-year-old continued from where he had left off last time out, shutting Ronaldo out of the game during open play. The cherry on top, though, was his perfectly glanced header to win Aston Villa the game, although he nearly went from hero to zero only to be bailed out by Bruno Fernandes.

B. Bourigeaud CM – Stade Rennais - 78 -> 82 Rated: This one could come from a mid-week fixture in Ligue 1 in the name of Bourigeaud. Stade Rennais recorded an impressive 6-0 win over Clermont Foot on Wednesday and midfielder Bourigeaud assisted two of the six goals for his side, picking up an 8 match rating from L'Equipe.

S. Fofana CM – RC Lens - 78 -> 82 Rated: A thrilling game took place between RC Lens and Marseille where Lens beat Marseille 3-2 to climb above their opponents into second place in the table. There were outstanding performances all around from Lens but captain Fofana led by example from beginning to end. He seemed to be everywhere on the field for the away side and he surely deserved a goal for his regular marauding runs into the penalty box. An 8 from L'Equipe could be enough to see him picking up an inform on Wednesday.

C. Gakpo LM – PSV Eindhoven - 78 -> 82 Rated: PSV Eindhoven were looking for a response after their embarrassing 4-0 defeat at home to Feyenoord at the weekend and they did as they ran out with a narrow 2-1 victory against Go Ahead Eagles. Gakpo was the main man for his side to secure all three points with a goal and an assist and picked up a 8.5 match rating and Player of the Week for the mid-week matchday.

P. Onuachu ST – Genk - 79 -> 82 Rated: Both strikers were a lot easier to pick this week with both scoring hat-tricks for their sides. The first one is Paul Onuachu from Genk who scored all three goals for his side in a 3-0 win against RFC Seraing.

S. Okaka ST – Basaksehir - 75 -> 81 Rated: The second striker who scored a hat-trick is former Udinese Calcio attacker Okaka who joined Basaksehir in the summer transfer window. Basaksehir recorded just their second win of the 21/22 season with a 3-0 victory over Rizespor and Okaka was the main man with scoring all goals for his side.

Ma Sang Hoon CB – Seongnam FC - 60 -> 70 Rated: There have been quite a few contenders for reserves this week without hat-tricks, especially defenders, so this could go both ways. One with a good chance to make it into the side on Wednesday is Ma Sang Hoon who scored both goals for his side in their 2-0 victory over Gangwon FC.

Guus Til CAM – Feyenoord - 72 -> 79 Rated: With two matchdays in Eredivisie counting towards TOTW it could make it difficult to predict but one who should not miss out is Feyenoord's Guus Til. Two goals mid-week in a 3-1 win against Heerenveen and also two goals in an eight-goal thriller against NEC Nijmegen should see him picking up his first inform on Wednesday.

G. Nilsson ST – Wehen Wiesbaden - 64 -> 74 Rated: This is one I'm not completely sure about as Germany's third divison often gets overlooked when it comes to informs. That being said, Wehen Wiesbaden made no prisoners and took all three points away at Würzburger Kickers with a 4-0 win, Nilsson put his name on the scoresheet three times and earned himself MOTM.

T. Sabitzer ST – WSG Tirol - 63 -> 73 Rated: The second player in the reserves with a hat-trick is Tirol's Thomas Sabitzer. Tirol recorded their first win of the campaign with a 4-2 victory over SK Ried and Sabitzer was one of the main reasons with scoring three of the four goals.