FIFA22 Team of the Week 1 Predictions

Published on by Simpleblue 40 Comments Updated on 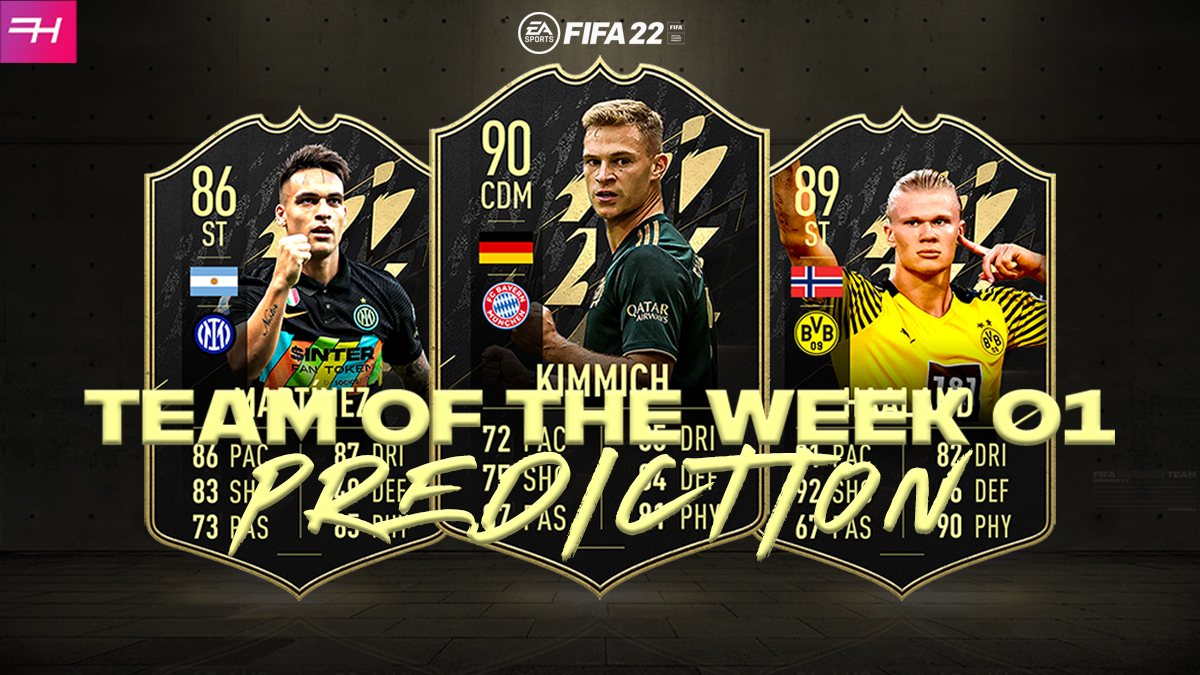 Hello and welcome back to our predictions on Futhead! Fifa 22 is right around the corner and Team of the Week 1 is expected and likely to drop on Wednesday when Web App is released. What can we expect? Well, a pretty good looking TOTW aswell with the first Featured Team of the Week Item which I predict to be Vinicius Jr. What you will notice is that most players links will lead to the Fifa 21 card as we haven't got the full database yet,but the face stats on the informs are already adjusted and should just slightly be different. 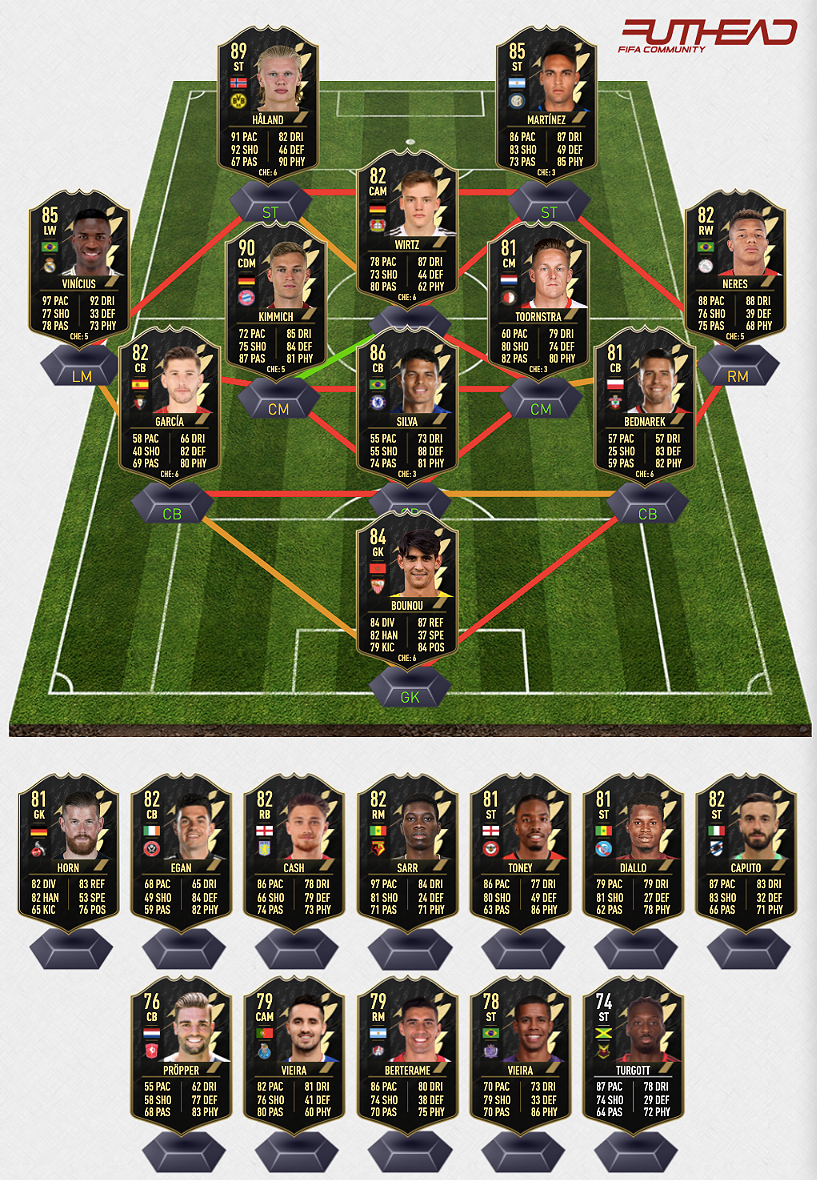 Y. Bounou GK – FC Sevilla - 82 -> 84 Rated: Sevilla earned a 0-0 draw at Real Sociedad in La Liga on Sunday after enjoying yet more good fortunate facing penalties. It was their fourth conceded spot kick in two games but Bounou manages to thwart Sociedad's usually reliable penalty taker Oyarzabal saving the strike. Bounou produced more heroics in the first half to keep out strikes from Isak and Januzaj and picked up a 3/3 match rating and MOTM.

T. Silva CB – Chelsea FC - 85 -> 86 Rated: Back into the starting XI, the veteran Brazilian was absolutely rock-solid at the back especially in the first half when Tottenham had a few positive moments. Did not let anything past him in defence and then broke open the deadlock with a thumping header after a fine run in the second half. He could have had a second goal if not for Lloris' fine save. An absolute world-class match and for that match no one else but him deserved the MOTM award.

D. Garcia CB – CA Osasuna - 78 -> 82 Rated: There have been a lot inform worthy performances when it comes to selecting defenders this week and one of them could come from La Liga in the name of David Garcia. The Osasuna defender put his name on the scoresheet in his side's 2-0 win against Deportivo Alaves thus has a good chance to make it into the side on Wednesday.

J. Bednarek CB – Southampton - 76 -> 81 Rated: Manchester City were held to a VAR-filled, frustrating 0-0 draw against a dogged Southampton side on Saturday afternoon. From the first whistle, Southampton's brave and well-dilled high block bottlenecked the ball into Manchester City's defensive third, frustrating the hosts as they denied them any shots in the opening 20 minutes. Bednarek helped the Saints to hand on for deal life and will have really impressed Hasenhuttl after making his return to the side, also picking up an 8/10 match rating and MOTM.

J. Kimmich CDM – FC Bayern - 89 -> 90 Rated: Rocking their excellent green shirt with golden trim – special for Oktoberfest – the reigning Bundesliga champions dismantled Bochum with ease as the game at the Allianz finished 7-0. It was an extraordinary display from Joshua Kimmich, who was the undisputed star player of the match for his side. Led the midfield for the club with his passing, aggression and courage as well as showcasing excellent awareness to score two goals in the game. Was awarded with a 1.5 match rating from Kicker, Sané is also possible but I've opted with Kimmich due to the lack of midfielder options this week.

Toornstra CM – Feyenoord - 76 -> 81 Rated: PSV Eindhoven's unbeaten start to the league campaign is over after they were hammered 4-0 by Feyenoord. Feyenoord grew into this game and Jens Toornstra was the one to shine for his side as he recorded a brace and helped Feyenoord moving up to fifth in the table.

F. Wirtz CAM – Bayer Leverkusen - 78 -> 82 Rated: Bayer Leverkusen bounced straight back from their first defeat of the season to Borussia Dortmund a week ago to beat VfB Stuttgart 3-1 with being down to 10 men after 30 minutes played. No one else than youngster Florian Wirtz was once again the one having a glorious display with scoring one and setting up Patrik Schick for another, picking up a 1.5 match rating and MOTM from Kicker.

Vinicius Jr. LW – Real Madrid - 80 -> 83 Rated: Real Madrid defeated Valencia 2-1 in La Liga to continue their good form. Ancelotti's side managed to make an incredible comeback after being a goal down in the second half, scoring late twice. Vinicius Jr. Put the visitors back on level terms in the final minutes after his deflected shot found a way in and moreover, he got the assist to Karim Benzema for the winner. With Vinicius picking up the highest match rating on Marca he seems to be the logical option from this game.

D. Neres RW – Ajax - 79 -> 82 Rated: Another game with a ton of goals was played in the Eredivisie where Ajax absolutely hammered Cambuur with 9-0. Ajax went into the game with full confidence after their 5-1 mid-week against Sporting CP and one of the players who stood out in an already amazing squad is David Neres who scored two and assisted another. It's very possible we will see two Ajax players being featured this week (happened last year too when Ajax won 12-0) and the other option would be Dutch defender Timber.

L. Martinez ST – Inter Milan - 85 -> 86 Rated: Inter returned to winning ways in emphatic style on Saturday evening, treating San Siro to a lesson in the art of clinical finishing with a 6-1 victory over Bologna. Lautaro Martinez showed that he can take over from Lukaku as the main man in attack for Inter Milan with a fine all-round display leading the line. Got the team up and running with a good strike, getting on the end of Dumfries' cross. He came close to adding another early in the second half but his effort bounced off the woodwork. Was awarded with an 8/10 match rating and MOTM and would be a superb card for the few first weeks of the game.

E. Haaland ST – Borussia Dortmund - 88-> 89 Rated: Borussia Dortmund kept pace with their title rivals by earning a 4-2 win over Union Berlin on Sunday in an entertaining game. Erling Haaland put the breaks on the Union comeback with an incredible lobbed finish past the goalkeeper to make it 4-2. It was another game-changing moment from Haaland, who continues to deliver week in, week out for Dortmund. Haaland also headed home from Meunier's cross in the first half and caused trouble most of the time.

T. Horn GK – Köln - 76 -> 81 Rated: Saturday's late match saw the RheinEnergie Stadion packed with fans in full voice, but they had to endure a couple of early moments of panic with a disallowed Nkunku goal. Modeste was on target for his side, scoring the opener and helping cologne maintain their strong start to the season in a 1-1 draw to RB Leipzig but it was Timo Horn who was the best player in that game. He made a total of 8 saves, a few very crucial ones that kept his side in the game and was rewarded with a 1 match rating and Player of the Week.

J. Egan CB – Sheffield Utd. - 78 -> 82 Rated: Both Hull City and Sheffield United were lingering close to relegation zone ahead of kick off and it was Sheffield who returned back to winning ways with a 3-1 victory. John Egan was the unlikely match-winner as he scored twice in the second half from corners - the first time United have found the net from a set piece since January. Dealt with the threat of Magennis comfortably and deservedly picked up MOTM.

M. Cash RB – Aston Villa - 78 -> 82 Rated: Aston Villa turned on the style in the second half to clinch a deserved 3-0 win over Everton in front of a raucous Villa Park crowd. One of the standouts was Matty Cash who was always a threat going forward, both cutting in and hanging wide right. On top of his performance he scored a superb opener and picked up an 8/10 match rating.

I. Sarr RM – FC Watford - 78 -> 82 Rated: Norwich's search for their first Premier League win of the season continues after they fell to a 3-1 defeat to Watford at Carrow Road. Sarr might be a bit disappointed as he could have gotten a hat-trick but with two goals from him and a brilliant overall performance he still picked up Man of the Match for his side.

H. Diallo ST – RC Strasbourg - 75 -> 81 Rated: Metz came into the derby du Grand-Est 18th on the table and without a win in their opening five games which shouldn't change after the game. Strasbourg took all three points with a 3-0 win and former Metz striker Diallo haunted his old club with two excellent finishes to put the game to bed in the first half. Diallo looks to have found his scoring boot just at the right time for Julién Stephan's side as they start to show some promising form after a difficult start and Diallo was awarded with an 8/10 and MOTM from L'Equipe.

I. Toney ST – Brentford - 76 -> 81 Rated: FC Brentford earned their first top-flight away win for 74 years as they beat Wolverhampton 2-0 despite playing the majority of the second half with 10 men. The first half was a Ivan Toney show, he was absolutely oustanding, could have had a hat-trick and was determined to give Mbeumo as many chances. Not as influental after the break but his first half performance was enough to pick up an 8/10 and MOTM.

Caputo ST – Sampdoria Genoa - 78 -> 82 Rated: Sampdoria should feature in this weeks TOTW, either in the name of Candreva or Caputo. Both put their name on the scoresheet in Sampdoria's 3-0 win over Empoli but with Caputo scoring twice and picking up MOTM I've decided to include him.

Pröpper CB – FC Twente - 68 -> 76 Rated: Usually we don't see EA giving out more than two players from smaller leagues in one TOTW but with the amount of high profile performances we could see Eredivisie being included three times this week. That being said, Pröpper scored two goals in Twente's 4-1 victory against Vitesse and usually this is enough for a CB to pick up an inform.

H. Viera CAM – FC Port - 72 -> 79 Rated: Another player, another hat-trick but this time it's a hat-trick of assists. Porto trashed Moreirense 5-0 and youngster Viera assisted three of the five goals for his side. It's possible that Luis Diaz could make it instead of Viera with 2 goals scored but for me it's more likely Viera will pick up the inform if EA pays attention to Liga NOS.

Berterame RM – San Luis - 72 -> 79 Rated: Back with TOTW predictions and also back with hat-tricks. That being said, one hat-trick came from Berterame who was involved in all of his team's four goals in San Luis' 4-1 win against Club Tijuana. He scored three and assisted the other which should be enough for him to make it into the side on wednesday.

Douglas Viera ST – S. Hiroshima - 70 -> 78 Rated: Another inform-worth performance came from the Japanese J-League in the name of Douglas Viera. Sanfrecce Hiroshima won their game against Kashiwa Reysol 3-0 and Douglas Viera scored all goals for his side, securing all three points.

Turgott ST – Östersunds FK - 64 -> 74 Rated: The last player in my prediction this week with another hat-trick is Blair Turgott. Östersunds claimed all three points with a 3-1 win over Elfsborg and Turgott was the one to shine, scoring all three goals of the game.