Published on by Simpleblue 4 Comments Updated on 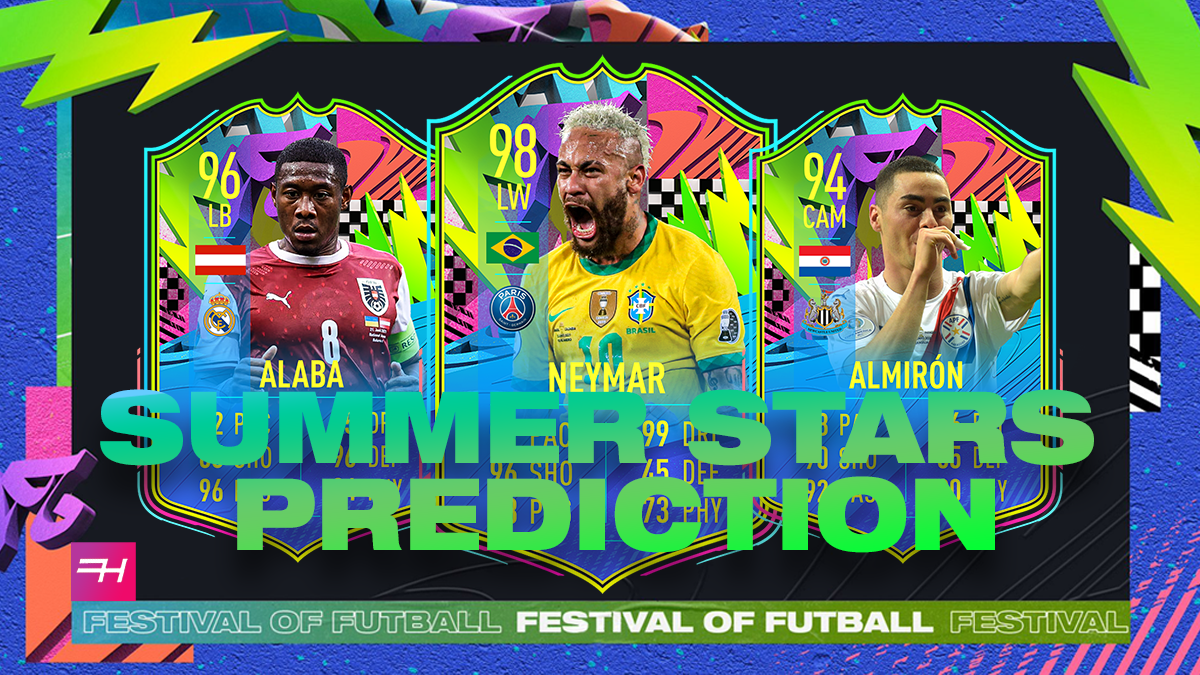 Wanted to leave a few words about this prediction before you get into the article. As you might know (or not), we'll get Summer Stars tomorrow which is basically replacing TOTGS and which will most likely be a combined team of the top performers from the Euro 2020 and the Copa America. With less players in packs this year it was even harder to select the main ones and find a balance between Euro and Copa America players. You will see that some players missed out in this prediction for different reasons. Just to name a few examples, Forsberg wasn't included due to his recent 93 rated card, doubt he'll get another now. Messi is also left out, read Papu Gomez' text for the explanation please. And for all the other players who will probably be mentioned by you guys in the comments, it's impossible to include everyone as usual but remember there are still SBCs coming and we might get a TOTT next friday. Player are upgraded that much due to the promised large permanent boosts and it's July. 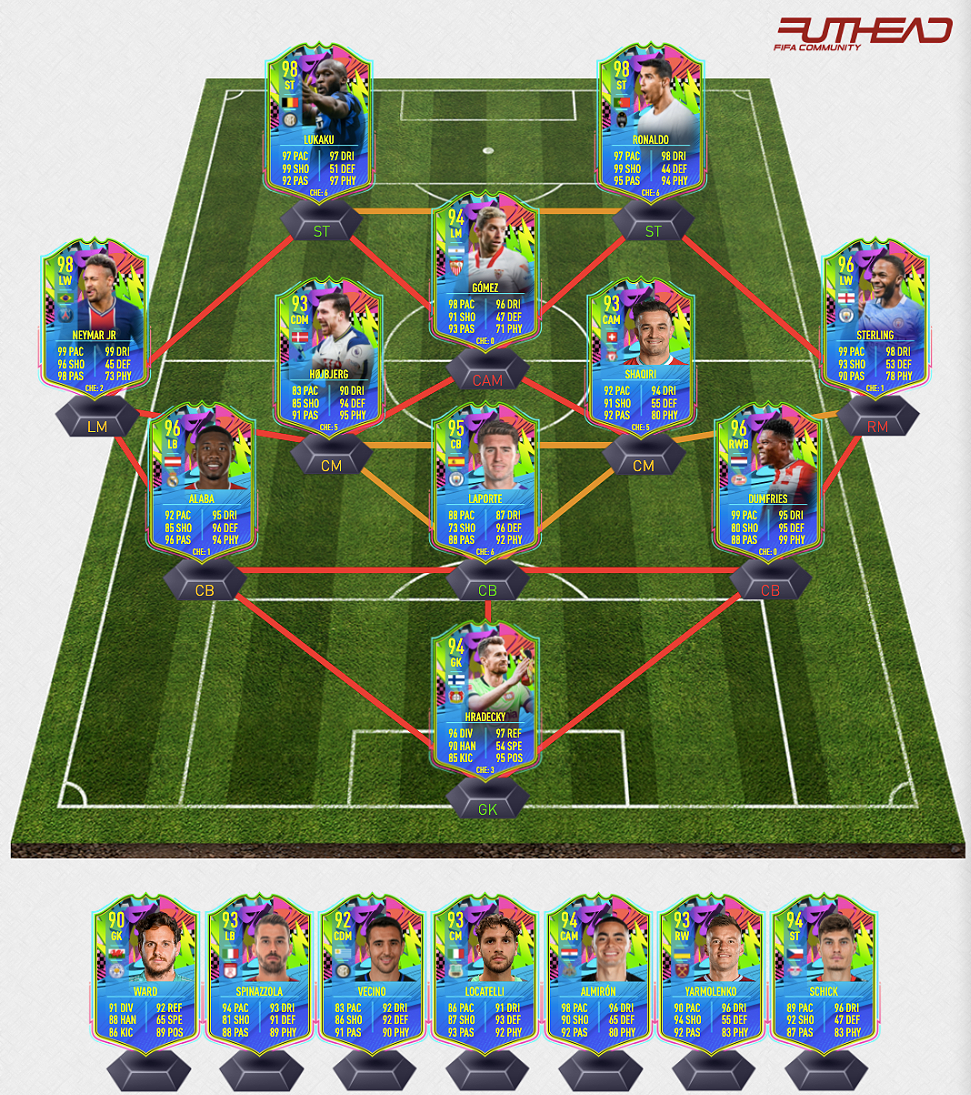 L. Hradecky GK – Bayer Leverkusen - 86 -> 94 Rated: Finland were always likely to find the going tough in their first major tournament finals and so it would prove as they were eliminated after the group stage, but they made life difficult for their opponents, in no small part to the efforts of goalkeeper Hradecky. The Bayer Leverkusen shot-stopper was a picture of concentration throughout the group stage, exemplified by his display against Denmark in a backs-to-the-wall 1-0 win where he saved a penalty.

D. Alaba LB – Real Madrid - 92 -> 96 Rated: Austria's historic Euro 2020 campaign ended in agony as they got knocked out by Italy in the Round of 16. This was an engrossing tournament for Austrian supporters, as they achieved their first-ever win in a Euro match against North Macedonia, followed by another victory against Ukraine which resulted in their first-ever entry into knockout stages. Evidently, their captain and new Real Madrid signing, Alaba had a big say in their achievments. He was strong in all departments and showed great leadership qualities on the pitch. He provided much-needed security in their backline and made vital contributions to the attack, finishing his personal campaign with two assists.

A. Laporte CB – Manchester City - 88 -> 95 Rated: For a while it looked as if Spain would struggle to qualify for the Round of 16 of Euro 2020, having drawn both their opening matches. But they set up a last-16 tie with Croatia thanks to a 5-0 rout of Slovakia, where Aymeric Laporte scored his first goal for the nation. The win also resulted in Laporte's second clean sheet of Euro 2020, with Spain also keeping out Sweden in their opening Group E match. Spain then conceded three in a spectacular extra-time thriller against Croatia but Laporte is still one who deserves a shout.

D. Dumfries RWB – PSV - 89 -> 96 Rated: Over the years, the Netherlands have never been short of talent in their squad. After a hiatus from major international tournaments, they have been back with a bang, winning all of their group stage matches. Denzel Dumfries has been undoubtedly one of their best performers. The defender lived up to all the hype he received prior to the tournament. Infact, he did so in style by scoring the winner in their first game against Ukraine. He then followed up with another against Austria. Individually, it has been a sensational Euro 2020 for Dumfries although Netherlands surprisingly got knocked out by Czech Republic in the Round of 16.

Hojbjerg CDM – Tottenham Hotspurs - 85 -> 93 Rated: Hojbjerg earned reputation at Tottenham last season for being a bit of a midfield destroyer while everyone else did the creative stuff. But with the start of the Euro 2020, he has displayed his excellent passing ability and the ability to run a game, too. The Spurs man has three assists to his name so far including two in the must-win final group game for Denmark against Russia, which the Danes won 4-1 and started to be the unexpected creative force in Denmarks midfield.

A. Gomez LM – Sevilla FC - 90 -> 94 Rated: Well, normally I would have included Messi but due to the fact that he's free-agent right now (new contract still will be signed for Barcelona) I'm not sure if he'll get a card and therefore I'm going with Papu Gomez. The 33-year-old attacking midfielder, now plying his trade at Sevilla, has had a brilliant few club seasons, which led to his call-up to the national team. Nevertheless, he was not a first-choice for manager Scaloni, as Nico Gonzales started the games against Chile and Uruguay. However, following disappointing performances from Gonzales, Gomez was brought into the team, and he grabbed his opportunity wiht both hands, impressing by scoring vital goals. He scored the winner against Paraguay and opened the scoring against Bolivia, helping his side secure the top spot in Group A.

Neymar LW – PSG - 96 -> 98 Rated: Unsurprisingly, Neymar has shone the brightest for Brazil at Copa America 2021 so far. After missing the last Copa, which Brazil won due to injury, Neymar lookes like a man on a mission in this year's competition. With four goal contributions (two goals and as many assists) in three matches he has played, Neymar proved once again why he is regarded as one of the best players in the world. He also created seven big chances and had 4.3 key passes per game, helping his side secure the top spot in the group.

R. Sterling LW – Manchester City - 92 -> 96 Rated: I really struggled when I was looking for a player from England to include in my side and even though England still haven't conceded yet, I ended up picking Raheem Sterling. England's games haven't been a joy to watch so far when it comes to creative and offensiv football but in the end the win is what's important, and the main reason England is still unbeaten and recorded two wins in the groupstage was Sterling who scored two of his three in narrow wins against Czech Republic and Croatia. The third was the opener in England's 2-0 win over Germany and although he wasn't that impressive overall he's likely to make it.

R. Lukaku ST – Inter - 96 -> 88 Rated: One of the pre-tournament favourites to win the Golden Boot was Romelu Lukaku, and the Belgian striker has not disappointed in the group stages, Lukaku scored twice in Belgium's opening 3-0 win over Russia. A blank followed against Denmark, but Lukaku bounced back to score Belgium's second in their 2-0 win over Finland, having already seen a goal ruled out for offside. But it's not only scoring goals what makes him so important, he also played several key passes and created space for hit teammates with intelligent movement off the ball. If he keeps his form, which is needed with De Bruyne not being available in the quarter-finals, Belgium's golden generation might finally win a major trophy.

C. Ronaldo ST – Piemonte Calcio - 98-> 98 Rated: Ronaldo has not been at his swashbuckling best in the Euros, much like he wasn't for Juventus the past season but he remains a goalscoring machine and is the leading top scorer in the tournament with five goals and one assist in four matches. Three of his goals may be from the penalty spot, but he kept Portugal in the Euro's as one of the best third-placed sides despite their leaky defence. You can argue against it but he's now the all-time leading goalscorer in European Championship history and also became joint-top international scorer by levelling Ali Daei's record.

D. Ward GK – Leicester City - 74 -> 90 Rated: There were a few other candidates for the potential second goalkeeper, but Leicester's shot-stopper was exceptional throughout. Wales have done very well to get out of the group but Ward had a pivotal role in that. He kept Wales in all three of the matches they have played in the group stage, making bis saves at crucial times, notably against Switzerland while they were fighting for the equaliser. Fine reflex stops, confident aerial takes and some quick distributions at times all made this arguably the best month of his career.

L. Spinazzola LB – Roma FC -78 -> 93 Rated: Spinazzola set the tone for this tournament of flying full-backs (and wing-backs) with his opening night performance in which he simply tore apart Turkey down the left. An oustanding dribbler, Spinazzola has given Italy an extra dimension with his ability to run at player from left back and absolutly deserves his spot in this team.

M. Locatelli CM – Sassuolo - 78 -> 93 Rated: Italy have been one of the best teams at Euro 2020 so far, and their midfield of Nicolo Barella, Jorginho and Manuel Locatelli has been key to their success at the tournament. Locatelli, in particular, looks set for a big-money move. The Sassuolo midfielder, who enjoyed a really good Serie A season this time around, has impressed for Mancini's side with his passing, dribbling and defensive solidity all standing out. He also scored a brace in Italy's second game against Switzerland and his stock definetly has soared during the tournament and propelled him into the spotlight even more.

M. Vecino CM – Inter - 80 -> 92 Rated: With so many options for attackers I couldn't include Cavani and therefore was looking for another option from Uruguay. I ended up picking Inter Milan's Matias Vecino. Uruguay finished second in the standings with seven points, Vecino played all four games for Uruguay, covering the defensive midfield but also recorded one assists.

M. Almiron CAM – Newcastle United - 82 -> 94 Rated: I actually was between Almiron and Romero, both have been incredibly important but decided to go with Almiron. He played a starring role for Paraguay as they qualified above two-time champions Chile from their Copa America 2021 group. The 27-year-old midfielder was the shining light for his side in the groupstage, producing key goalscoring contributions. Even in Paraguay's narrow defeat against Argentina, Almiron was one of the best players on the pitch. However, in what comes as a very big blow for Paraguay, Almiron reportedly pulled his hamstring in the last group game against Uruguay and is likely to miss the quarter-finals.

A. Yarmolenko RW – West Ham - 77 -> 93 Rated: Ukraine have been among the underdogs at Euro 2020 so far and their quality in attack has been crucial to their success. Andriy Yarmolenko, who scored twice while delivering an assist, has been their go-to man. Scoring with either feet, the 31-year-old has made his country and manager Andriy Shevchenko proud. Yarmolenko’s partnership with Roman Yaremchuk in attack has worked wonders for the team so far and it will be fascinating to watch how they fare against England.

P. Schick ST – RB Leipzig - 78 -> 94 Rated: Had it not been for Patrick Schick, the Czech Republic would not be in the last 16 of the competition. The Bayer Leverkusen striker scored all three of their goals, two of which were achieved in impressive fashion. In the vital opening match against Scotland, he opened the scoring with a pinpoint header under pressure before scoring what will be the goal of the tournament with an opportunist effort from near halfway. Kept a cool head from the penalty spot to give the Czechs a vital point against Croatia. Having scored just nine times for Bayer Leverkusen last season, the 25-year-old has been a surprise star of Euro 2020 so far.