FIFA 21 Team of the Week 32 Predictions

Published on by Simpleblue 5 Comments Updated on 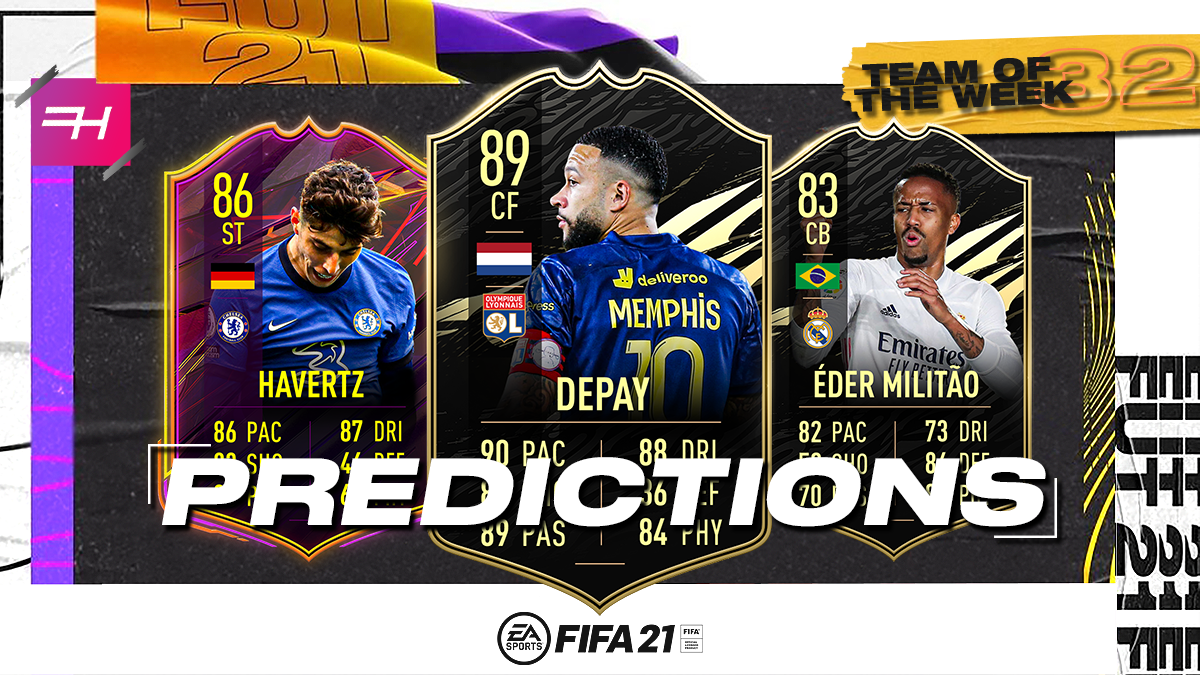 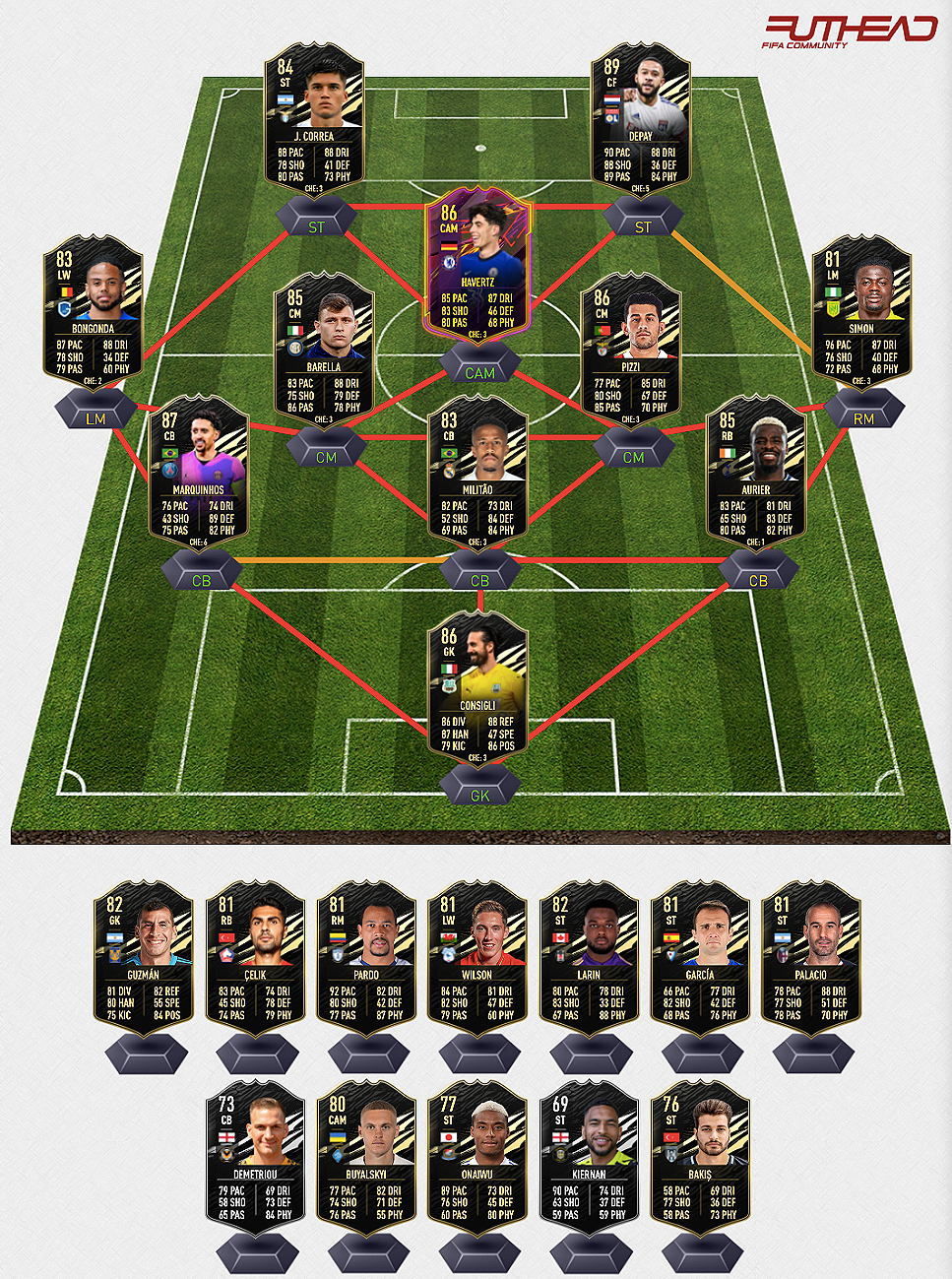 A. Consigli GK – Sassuolo - 84 -> 86 Rated: Atalanta Bergamo handed the Scudetto to Inter Milan by drawing 1-1 away to Sassuolo on Sunday afternoon, with each of the two sides ending the game with just ten men. Sassuolos shot stopper Consigli was superb that game with a total of six saves but more important was his saves penalty which saw him picking up a 7.5 from Gazzetta.

Marquinhos CB – Parsi Saint-Germain - 86 -> 87 Rated: Paris Saint-Germain secured a hard-fought 2-1 home victory over Lens in Ligue 1 in absence of injured Mbappé to keep themselves in touching distance to league leaders Lille. Marquinhos was vocal when his team struggled defensively, gave a captain's performance at both ends of the pitch and scored what proved to be the match-winner. A 7 match rating from L'Equipe could be enough this week for him to make it into TOTW, a quite nice boost for his potential TOTS card.

E. Militao CB – Real Madrid - 80 -> 83 Rated: Real Madrid laboured to an unimpressive 2-0 victory over Osasuna to move to within two points of 2020/21 La Liga leader Atletico Madrid. Eder Militao was the best player for Real Madrid on the night. He not only marshalled the Madrid backline with elan, but he also posed a huge atacking threat, scoring at the third time of asking after he was denied earlier a couple of times by Herrera.

S. Aurier RB – Tottenham Hotspur - 83 -> 85 Rated: Tottenham Hotspur boosted their European hopes with a 4-0 over Sheffield United thanks to a superb hat-trick of Gareth Bale. But since Bale just recently got his Flashback card it seems unlikely they will give him an inform and thus I'm going with Aurier who setted up two of the three goals for Bale.

Pizzi CM – SL Benfica - 84 -> 86 Rated: Two early goals for Benfica have been enough to earn all three points against Tondela and put them in a good mood right before the 'clásscio' against FC Porto on Thursday. The Portuguese international Pizzi was involved in both goals with scoring one and assisting the other and although Everton was named MOTM I'm opting for Pizzi because I expect Everton to make it into the Liga NOS TOTS and thus can't see him pick up an inform.

N. Barella CM – Inter - 83 -> 85 Rated: Releagtion to Serie B was confirmed for Crotone, as champions elect Inter left the Stadio Ezio Scida with a 2-0 victory in Serie A on Saturday evening and also secured their first Scudetto since the 2009/10 season after Atalanta failed to defeat Sassuolo. Nicolo Barella once again was one of the best players this game and showed why he's already one of the best in his position. He often was spotted high up the pitch, linking with Hakimi to free the wing-back and played in Martinez brilliantly but the forward miss-controlled. Released his team for the counter attacking second goals and picked up a 7.5 match rating from Gazzetta.

M. Simon LM – FC Nantes - 77 -> 81 Rated: Sunday's Ligue 1 games have been really entertaining lately and so it was yesterday. Nantes took all three and crucial points with a solid 4-1 win away at Stade Brest to boost their hopes of another season in the top-flight. Both, Simon and Louza scored a goal and assisted another but with Moses being goal it's easier to include him especially with the lack of clear strand out options from that league.

T. Bongonda LW – Genk - 80 -> 83 Rated: KRC genk started their championship playoffs in the right way and picked up all three points away at Antwerp. The decisive player for his side was Bongonda who scored two of the three goals and assisted the third one, his second inform should nearly be secured on wednesday.

K. Havertz ST – Chelsea FC - 85 -> 86 Rated: Chelsea London cemented their position in the Premier League top four with a routine win over Fulham on Saturday evening. It was a consummate No9 performance from Havertz playing a false nine. Both of his goals were down to his outstanding movement and the quality of his finishing, a nearly perfect performance from the German international and deserved MOTM.

J. Correa ST – Lazio - 81 -> 84 Rated: Lazio Roma nearly choked their first-half lead against Genoa after two late goals from their opponents but it went well and they took all three points with a narrow 4-3 win at home. Two of the goals came from Correa who played the second striker role beside Immobile and picked up a 7.5 for his performance.

M. Depay ST – Lyon - 88-> 89 Rated: It was probably the most entertaining game in Ligue 1 this season where Lyon was the lucky side to win the clash 3-2 and kept touching distance to Monaco. Depay once again was Lyon's best player and although he just scored one goal and assisted another it's hard to ignore an 8 match rating from L'Equipe. The only things against him is the fact that this would be his fourth inform.

N. Guzman GK – Tigres U.A.N.L. - 79 -> 82 Rated: Not sure why it's always like this but there's again no clear standout candidate for the second goalkeeper spot. Out of the few options I'm going with Guzman who made a total of 8 saves for his side in their 0-0 draw against Guadalajara.

Z. Celik RB – LOSC Lille -77 -> 81 Rated: LOSC Lille regained top spot in Ligue 1 – having only surrendered it for a matter of hours – with a 2-0 win over 10-man OGC Nice. Once again Lille's turkish pair Burak Yilmaz and Celik got the goals but with Yilmaz acutally being packable in TOTW the only option is his partner who volleyed home a stunning second goal and picked up a 7 match rating for his performance.

F.Pardo RM – Pachuca - 75 -> 81 Rated: Another Liga MX inform could come in the name of Felipe Pardo on wednesday. Pachuca easily took all three points after their 5-1 win against San Luis and although two players scored a brace I'm going with Pardo who assisted three of the five goals.

H. Wilson LW – Cardiff City - 77 -> 81 Rated: Cardiff City ended their last away game of the 2020/21 season in style as they recorded a 4-0 win away at Birmingham. That being said, Harry Wilson had his finest performance yet for Cardiff as he netted a hat-trick. The Welshman netted an early lob followed by a pair of excellent free-kicks and deservedly grabbed the MOTM award.

C. Larin ST – Besiktas - 79 -> 82 Rated: Besikas is getting closer and closer to win the Süper Lig title for the first time since the 2016/17 season after they've recorded a memorable 7-0 home victory against Hatayspor. Cyle Larin showed that he was fully recovered from his injury and scored impressive four of the seven goals playing up front as a striker. Definetly a lock for TOTW.

R. Palacio ST – Bologna - 75 -> 81 Rated: One of the few draws in Serie A came from the battle between Bologna and Fiorentina. Points were shared between the two sides but the one who stole the show was Palacio. Despite being 39 years old he has shown that he still is able to score goals, to be exact he scored all three for his side and was named POTW in Italy.

K. Garcia ST – SD Eibar - 77 -> 81 Rated: Bottom of the league side Eibar kept their survival hopes alive and secured crucial three points with a 3-0 home win over Deportivo Alaves. Kike Garcia was on target and scored all three goals for Eibar, giving his team a glimpse of hope to stay another season in the Spanish top-flight.

Demetriou CB – Newport County - 63 -> 73 Rated: There aren't as many hat-tricks as last week and therefore it's probably a bit harder to pick a player but I'm going with one of the few defenders who got their names on the scoresheet this weekend. Demetriou was one of them, scoring two of the four goals in Newport's 4-0 win over Scunthorpe.

Buyalskyi ST – Dynamo Kyiv - 74 -> 80 Rated: After last weekend's 5-0 defeat and winning the league, Dynamo recorded another impressive win as they crashed Vorslka Poltava 5-1 away. Three of the goals came from Buyalskyi and thus he should easily make it into the side on wednesday.

B. Kiernan ST – Harrogate Town - 59 -> 69 Rated: A really entertaining game ended in a 5-4 win for Harrogate Town against Cambridge U. Brendon Kiernan scored three of the five goals for his side and should pick up his inform on wednesday.

Onaiwu ST – Yokohama F. Marinos - 69 -> 77 Rated: Yokohama F Marinos recorded a simple 3-0 win away at Tokyo and kept touching distance to the top three spots. Japanese forward Ado Onaiwu scored all three goals for his side and puts his tally up to eight this season.

S. Bakis ST – Heracles Almelo - 67 -> 76 Rated: Heracles Almelo are still in the race for the European playoffs after a simple 4-0 victory over relegation threatened VVV-Venlo. Sinan Bakis was the decisive player for his side with scoring three of the four goals. The only thing which could prevent him to be included in TOTW is the fact that one of his goals came from the penalty spot.