FIFA 21 Team of the Week 31 Predictions

Published on by Simpleblue 6 Comments 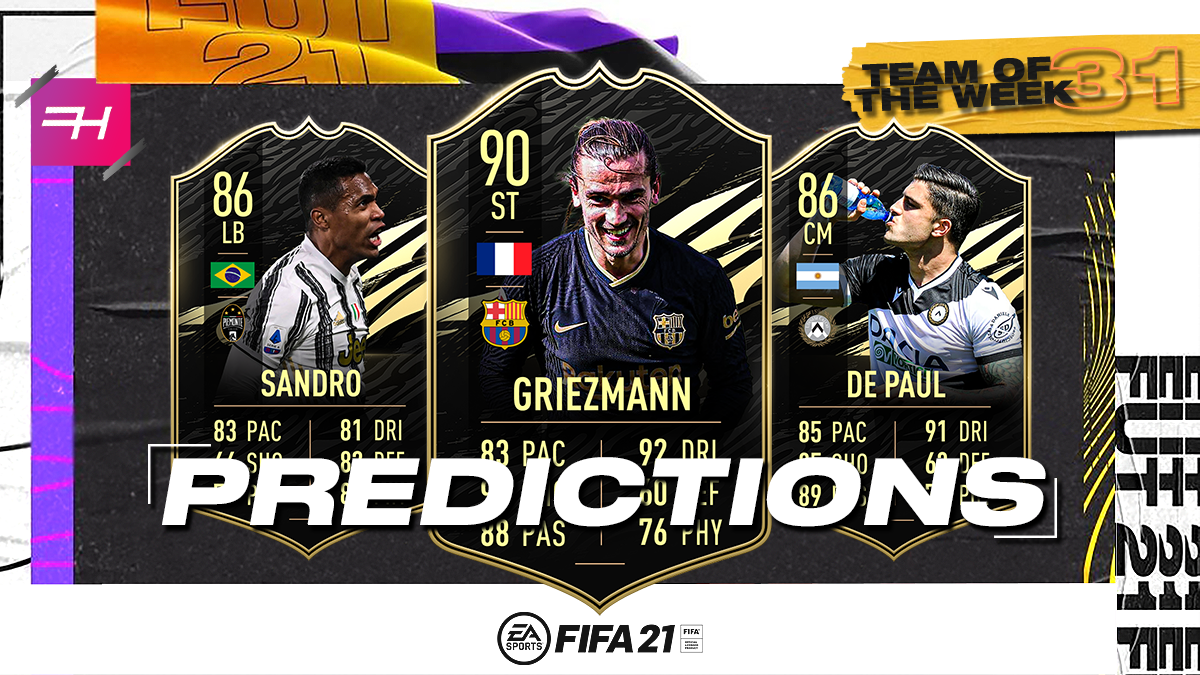 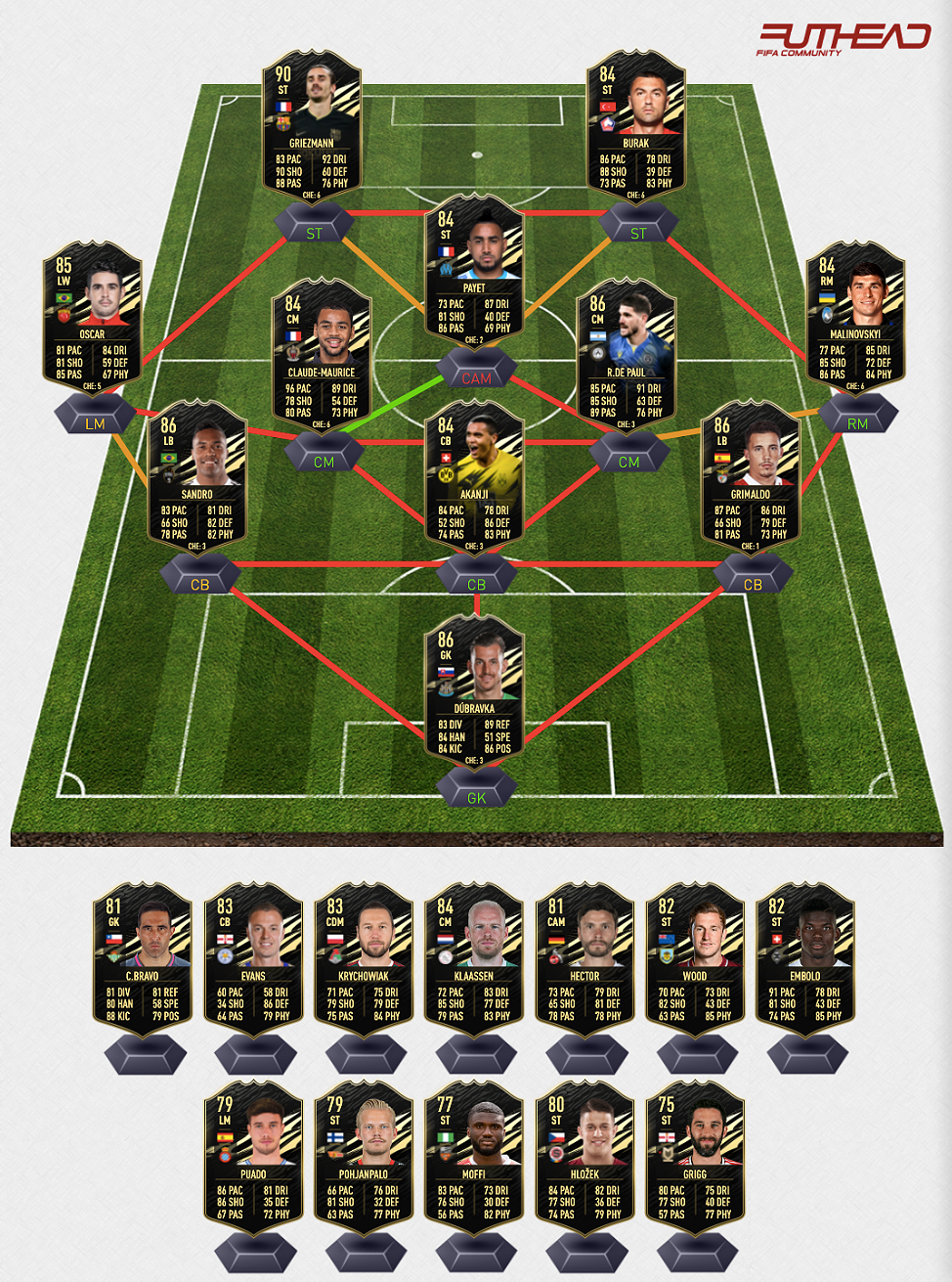 M. Dubravka GK – Newcastle United - 85 -> 86 Rated: A last-gasp equaliser from Willock, just moments after Wilson had a goal ruled out, earned Newcastle a dramatic 1-1 draw with Liverpool. It was Dubravka's best performance since returning to the team, as he made eight saves and kept Newcastle in the game and deservedly picked up MOTM.

A. Sandro LB – Piemonte Calcio - 85 -> 86 Rated: Juventus came into the game against Parma off a 1-0 loss to Atalanta and recovered well with a 3-1 home win. Alex Sandro had an excellent display after struggling in recent weeks and almost singlehandedly setted up Juventus' win with scoring two goals.

M. Akanji CB – Borussia Dortmund - 82 -> 84 Rated: Borussia Dortmund remain in touching distance of the top four thanks to a brace from Haaland. But with him gettin his headliner upgrade I'm going with Akanji who put in another impressive display after his midweek performance, as he dealt with the threat of the dangerous Weghorst really well. The Swiss centre-back looked comfortable at all times, positioned himself really well and made several important recoveries for his side, especially after being down to 10 men. He also came close to scoring in the second half but his header was cleared off the line. He picked up a 2 match rating for both games and also was in Kicker's TOTW for both games, a second inform could be on the way.

Grimaldo LB – SL Benfica - 84 -> 86 Rated: Benfica recorded an important 5-1 win over Portimonense to move 2 points clear in their race for the Europa League qualification spots. The Spanish wing-back Grimaldo got himself two assists in this game and although Liga NOS haven't seen much love this Fifa he might get in this week due to the lack of higher rated defenders.

Claude-Maurice CM – OGC Nice - 81 -> 84 Rated: OGC Nice recorded a 3-1 come-from-behind win at home to Montpellier and recovered well after their 0-2 defeat against Dijon. The former Lorient player Maurice was in all the right places against Montpellier, got himself a goal and an assist and was the one to make the difference.

R. De Paul CM – Udinese - 84 -> 86 Rated: Udinese Calcio put more pressure on relegation-battling Benevento after they defeated them 4-2 in Sunday afternoon's early Serie A match. After De Paul missed out last week due to his late red card I'm predicting him to make it into the side this week after he assisted two of the four goals and picked up a 7.5 and MOTM from Gazzetta.

R. Malinovskyi RM – Atalanta - 82 -> 84 Rated: Atalanta were in no mood to pass up on the chance to go second in Serie A as they emphatically hammered Bologna 5-0 at the Gewiss Stadium on Sunday evening. There are two serious options for an inform and I'm going with Malinovskiy who's on a run at the moment. He once again put his name on the scoring sheet as he opened the scoring in the first half and also added an assist to his game.

Oscar LW – Shanghai SIPG - 83 -> 85 Rated: The Chinese Super League was back in action with their first matchday and Shanghai Port started their campaign with an impressive 6-1 win away at Tianjin Tigers. Three of the goals came from Arnautovic but I'm instead going for the Brazil midfielder Oscar who got himself four assists in this game. It could go both ends so this is a 50/50 pick.

D. Payet ST – Marseille - 82 -> 84 Rated: Marseille recorded their first away win since early December with a 3-1 against Reims that liftet Jorge Sampaoli's side to fifth in the Ligue 1 table. Payet first was the author of the equaliser with a perfect cross strike before scoring a double in the second half to secure all three points for his side.

B. Yilmaz ST – LOSC Lille - 82 -> 84 Rated: LOSC Lille moved back to the top of the Ligue 1 table after coming from 2-0 down to beat Depay's lyon with a dramatic 3-2 win on Sunday. Lille's striker Yilaz spent 90 minutes harassing the Lyon defenders and rewarded himself with a sublime free-kick before the break, delivered an assist for David before scoring the winning goal with just 5 minutes left to play. A huge 9/10 match rating frim L'Equipe should be enough for him to pick up his second inform which would make his TOTS even better.

A. Griezmann ST – FC Barcelona - 89-> 90 Rated: Barcelona came from behind to clinch another vital three points in the title race on Sunday, earning a narrow 2-1 victory over a stubborn Villareal. Griezmann produced one of his best performances of the season and although he did not see a lot of the ball, the Frenchman was clinical in the most crucial junctures of the game. On another day he could have had a hat-trick but two goals could be enough to pick up the inform.

C. Bravo GK – Real Betis - 77 -> 81 Rated: There are not a lot of options for the second goalkeeper and I was struggling a bit to find one so I'm going with Bravo. Real Madrid were held to a 0-0 draw by Real Betis which was another massive blow for them in the title race. Claudio Bravo was one of the reason with a total of five saves to deny Real from scoring.

J. Evans CB – Leicester City -80 -> 83 Rated: Leicester City blitzed a beleaguered West Brom and were comfortable victors in a crucial game to move them 4 points clear in the top four race. Jonny Evans produced a thumping header for his first goal of the season, which was deserved not only for his performance here, but for his displays over recent weeks. He also timed his tackles superbly when he did have defending to do and picked up a 9/10 match rating and MOTM.

Krychowiak CDM – Lokomotiv Moscow - 80 -> 83 Rated: This is probably the third time I'm including Krychowiak, hoping he will finally pick up his first inform of the year. That being said, he once again put is name on the scoring sheet as he scored two of the five goals in Lokomotiv Moscow's 5-2 win away at Tambov.

D. Klaassen CM – Ajax - 81 -> 84 Rated: Ajax bascially confirmed themselves as league winners after their 2-0 victory over Alkmaar, now sitting 12 points ahead of PSV with four matches remaining. Klaassen once again proved himself crucial for his side as he was in the right place at the right time twice to net both goals and picked up an 8.5 match rating from Vl.

J. Hector CAM – 1. FC Köln - 77 -> 81 Rated: Cologne recorded a much-needed 2-1win over high-flying RB Leipzig to end the Billy Goat's nine-game winless run and inject fresh impetus into their battle against relegation. Jonas Hector was the shining star this game with scoring both goals and deservedly picked up MOTM.

B. Embolo ST – Borussia M'gladbach - 78 -> 82 Rated: Borussia Mönchengladbach rekindled their hopes of qualifying for Europe next season with a lightning-fast start at home to Arminia Bielefeld, scoring three times in the opening 18 minutes to pave the way for a 5-0 triumph. Breel Embolo struck twice for his side and assisted another which should see him picking up an inform on wednesday.

C. Wood ST – Burnley - 78 -> 82 Rated: Burnley thumped Wolvers 4-0 away to move close to securing their Premier League status for another season. Chris Wood was sensational as he scored a first-half hat-trick and also assisted the fourth goal which saw him picking up a perfect 10/10 match rating.

Puado LM – Espanyol Barcelona - 72 -> 79 Rated: Espanyol Barcelona looks more likely now to being crowned champions in La Liga 2 after their 4-0 win over Las Palmas. Puado was the main man with scoring three of the four goals for his side, only the ridiculous amount of hat-tricks this weeks could see him missing out.

T. Moffi ST – FC Lorient - 69 -> 77 Rated: Relegation-battling side Lorient recorded an impressive 4-1 win at home against Bordeaux to boost their Ligue 1 survival hopes. The Lorient striker does not stop scoring. He was the author of a hat-trick against Bordeaux and he even had three opportunities to improve his record.

A. Hlozek ST – Sparta Praha - 74 -> 80 Rated: There have been an amazing amount of hat-tricks this weekend which makes it hard to pick one who might miss out. That being said, young prospect Adam Hlozek scored three of the four goals for Sparta as they defeated Slezsky Opava 4-2 at home.

W. Grigg ST – MK Dons - 65 -> 75 Rated: MK Dons recorded an impressive 5-0 victory over Swindon Town who were relegated from League One after this heavy defeat. Will Grigg became the first MK Dons player to score four goals in a single match, he definetly was on fire!

J. Pohjanpalo ST – Union Berlin - 72 -> 79 Rated: Union Berlin boosted their hopes of a top-six finish while sinking their visitors ever deeper into the relegation mire. That being said, Joel Pohjanpalo was the standout player for his side with scoring all three goals and was named POTW from Kicker.