FIFA 21 Team of the Week 30 Predictions

Published on by Simpleblue 30 Comments 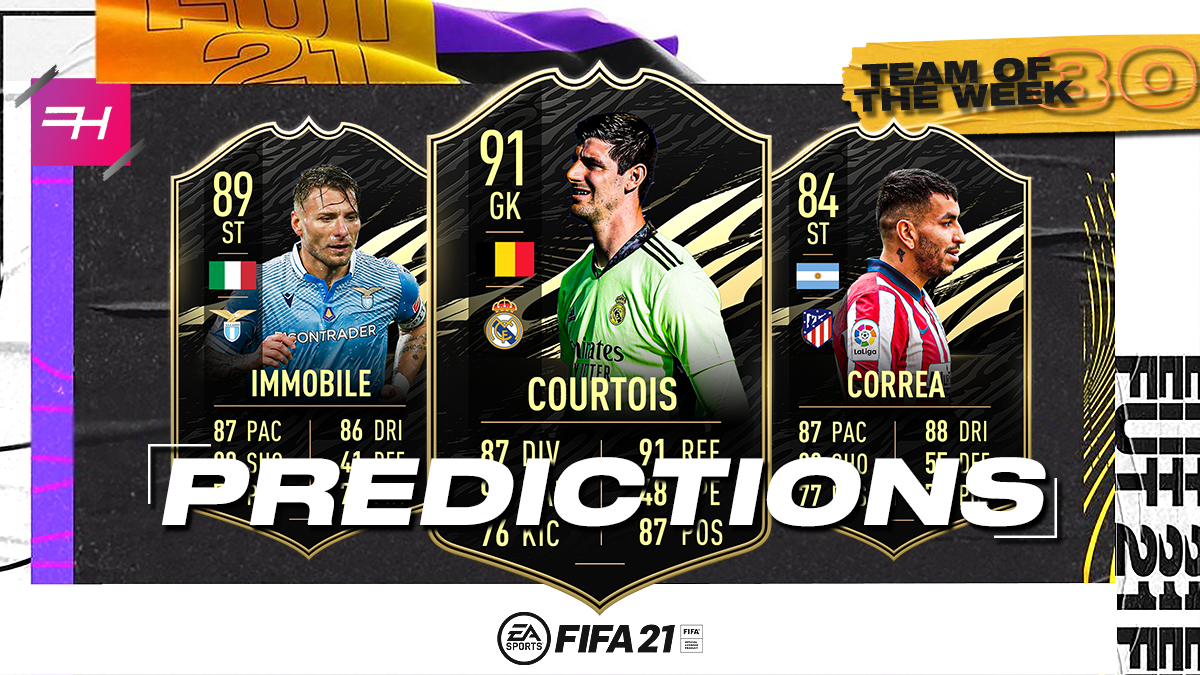 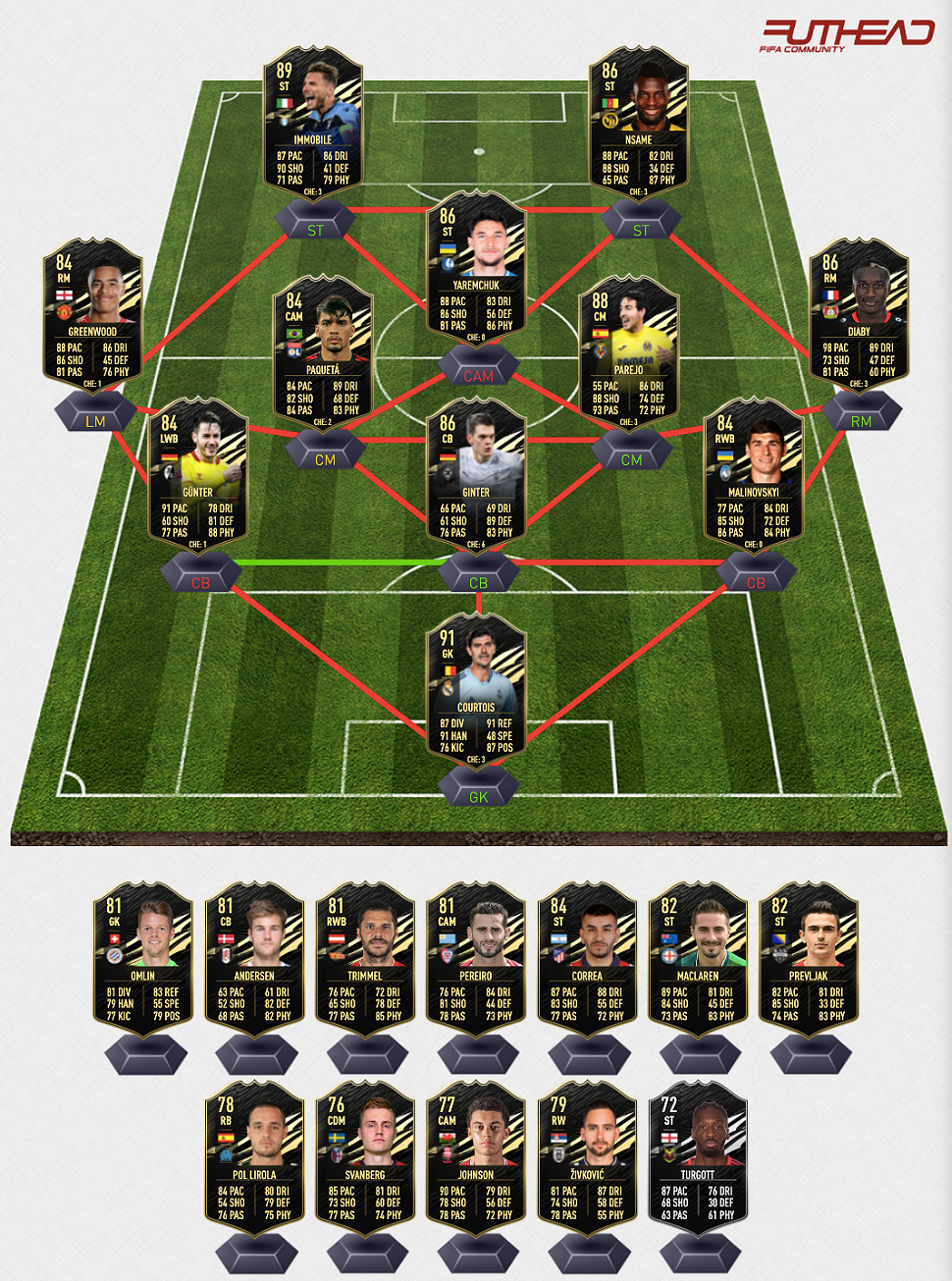 T. Courtois GK – Real Madrid - 90 -> 91 Rated: Handed multiple blows with majority of the team unavailable due to injury or Covid-19, Zidane was forced to play an unfamiliar squad against Getafe. In the end, a lacklustre performance from Madrid resulted in dropped points in the title race. Man of the Match was the Belgium international Courtois after saving six shots from Getafe, many of which could have easily found the back of the net.

M. Ginter CB – Borussia M'gladbach - 84 -> 86 Rated: Borussia Mönchengladbach showed future head couch Adi Hütter what they are capable of with a big win over Champions League-chasing Eintracht Frankfurt when they ran out as 4-0 winners. Man of the match was Jonas Hofmann but with Community TOTS coming this week where Hofmann might be featured I'm instead going with Ginter who scored the opening goal and also kept a clean sheet.

R. Malinovskyi RWB – Atalanta - 82 -> 84 Rated: Juventus' top-four ambitions were dealt a major blow on Sunday afternoon as they conceded late to slip to a 1-0 defeeat against Champions League hopefuls Atalanta. The winner came from the Ukrainian international Ruslan Malinovskiy who came close to scoring with a long-range free-kick before he gave Atalanta the crucial win as he deflected a shot past Szczesny.

C. Günter LWB – SC Freiburg - 82 -> 84 Rated: SC Freiburg recorded a 4-0 home win against Schalke that leaves the league's bottom club just one defeat away from relegation. Two of the goals came from Günter who puts his Bundesliga goal tally now to six and he also scored his first career brace. Kicker awarded his performance with a perferct 1 match rating and a place in their TOTW.

Parejo CM – Villareal CF - 87 -> 88 Rated: Villareal remained in a good spot for the international spots after they trashed UD Levante 5-1 on Sunday. That beig said, Parejo got his hands in two of the goals with assisting them and due to the lack of midfielder he's a serious options for his third inform.

L. Paqueta CAM – Olympique Lyonnais - 81 -> 84 Rated: Lyonnais keot it a four-way title race in Ligue 1 after their 2-1 success at Nantes and are unbeaten in their last 15 Ligue 1 away games. The Brazilian midfielder was brilliant in the first half who assisted Depay for the opener and even if he eased off in the second half, it was always him who was at the origin of Lyon's actions with offerings and picked up an 8 match rating from L'Equipe. Usually one assist wouldn't be enough for me but with nearly no Premier League games being played there's a chance he might get in.

M. Diaby RM – Bayer Leverkusen - 84 -> 86 Rated: Bayer Leverkusen swept past Cologne on Saturday evening in the Rhine derby to boost their hopes of playing European football next season. Man of the Match was the Jamaican Leon Bailey who scored his second brace of the season and assisted another but he's very likely to be featured in the Community TOTS this week and therefore I'm going with Moussa Diaby who got a goal and also assisted another.

Yaremchuk ST – Gent - 84 -> 86 Rated: The first inform possibly coming from the Pro League is Yaremchuk. Gent absolutely trashed Zulte Waregem 7-2 in their fixture and Yaremchuk got himself two goals and an assist and could have easily scored another two if he wouldn't had hit the woodwork.

C. Immobile ST – Lazio Roma - 88 -> 89 Rated: Lazio Roma sealed all three points in a dramatic contest against Benevento Calcio at the Stadio Omlimpico on Sunday afternoon, claiming a 5-3 win. The Roma captain stepped up for his team, scoring twice to help them on their way. Inzaghi's side were good across the board in attack, but Immobile was the standout with his brace and is likely to pick up the inform.

J.P. Nsame ST – BSC Young Boys - 84-> 86 Rated: Young Boys Bern cleared up all doubts and secured their fourth league title in a row with 7 games left to play after their 3-0 victory against FC Lugano. Man of the Match once again was the Cameroon striker Jean-Pierre Nsame who scored all three goals for his side and could pick up his third inform on Wednesday.

J. Omlin GK – Montpellier HSC - 77 -> 81 Rated: There are not a lot of options for the second goalkeeper so I'm going with Montpelliers shot stopper Omlin. He disgusted the Lille attackers in their meeting, preventing them a total of 6 times to score a goal. He fell for Arajo's goal later but he was still decisive at the end of the match when he denied Yilmaz again to score the winner.

J. Andersen CB – Fulham -76 -> 81 Rated: A Nketiah goal deep into stoppage time helped Arsenal snatch a point when Fulham already looked like picking up all three points. Despite the late equaliser, Andersen enjoyed a good game, pulling off some excellent challenges to keep his side in this game and picked up a huge 9/10 match rating which could be enough this week to earn an inform.

C. Trimmel RWB – Union Berlin - 75 -> 81 Rated: Union Berlin got the better of VfB Stuttgart in a battle of European outsiders on Saturday, with Prömel scoring on his 100th appearance and Musa opening his Bundesliga account for the capital club in a 2-1 win. Trimmel got both assist for the goals and with a 1.5 match rating from Kicker I can't really see him not finally getting his first inform.

G.Pereiro CAM – Cagliari - 75 -> 81 Rated: It was a thrilling game between Cagliari and Parma Calcio in a relegation 6 pointer where Cagliari came back from being down 0-2 to win 4-3 and boost their Serie A survival hopes. The decisive player Pereiro came from the bench and turned the game around with one goal and two assists and could pick up the inform on wednesday for it.

A. Correa ST – A. Madrid - 82 -> 84 Rated: Atletico Madrid gave themselves some much-needed breathing room in the title race with a chrushing 5-0 win over Eibar. Correa played as a more-central striker than he is normally accustomed to but got used to it real quick and grabbed two vita goals and also got the assist for Llorente's first goal in the second half with a neat pullback.

J. Maclaren ST – Melbourne City - 79 -> 82 Rated: Melbourne City moved to the top of the A-League table after they absolutely trashed their cross-city rivals Melbourne Victory 7-0 on a historic Saturday night. The undoubtedly Man of the Match was Maclaren who scored five of the seven goals for his side and took his scoring record this season to 19 in total. Although he's a contender for a Community TOTS item I can't see him getting in and he should pick up his second inform on wednesday.

S. Prevljak ST – Eupen - 78 -> 82 Rated: There are a few players who could feature in TOTW this week from the Pro League but one who definetly should be in is Prevljak after he scored all three goals in KAS Eupen's narrow 3-2 win away at Sporting Charleroi.

P. Lirola RB – Marseille - 71 -> 78 Rated: There are not a lot of hat-tricks this week from silvers which allows me to include Marseilles Spanish right-back who scored a brace against Lorient in Marseille's narrow 3-2 win and picked up an 8 match rating from L'Equipe for it.

M. Svanberg CM – Bologna - 68 -> 76 Rated: Bologna beat Spezia 4-1 on Sunday in keeping with what was a dramatic afternoon across Serie A, now sitting on 37 points and comfortably 11th in the Serie A table. Two of the goals came from the defensive midfielder Svanberg before an hour had been played and due to the lack of hat-tricks when it comes to silver players this week and his 8 match rating from Gazzetta he should pick up an inform this week.

B. Johnson CAM – Lincoln City - 69 -> 77 Rated: Lincoln City finally ended their winless run in League One as they beat MK Dons 4-0 at Sincil Bank. After a low-key first half, Brennan Johnson came alive after the break and netted a 14-minute hat-trick which should be enough for a second inform.

A. Zivkovic RW – PAOK - 73 -> 79 Rated: There are quite a few options from silvers this week and so this is more like a guess but Zivkovic raised his chances for an inform this week after he scored both goals in PAOK's 2-0 win against Olympiacos.

B. Turgott ST – Östersunds FK - 62 -> 72 Rated: A player who should get in this week is Turgott. The Swedish league is back in action for the second week now and Turgott was on target when he scored three of the five goals in his side's 5-0 win against Oerebro.