FIFA 21 Team of the Week 28 Predictions

Published on by Simpleblue 42 Comments 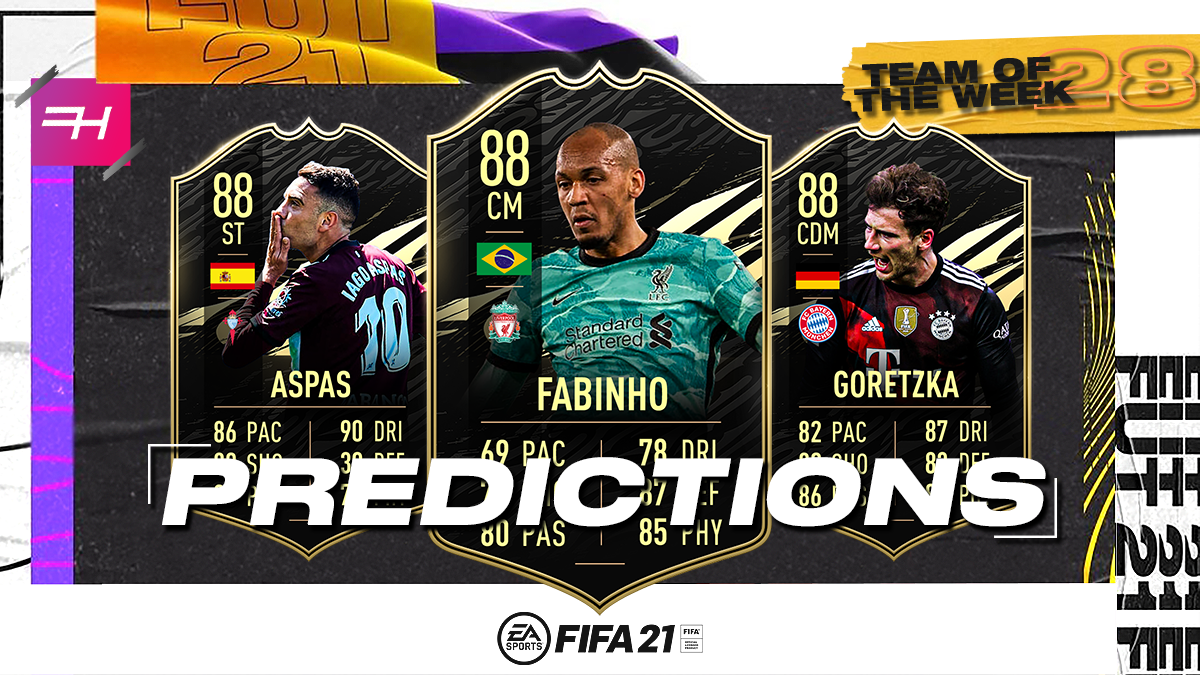 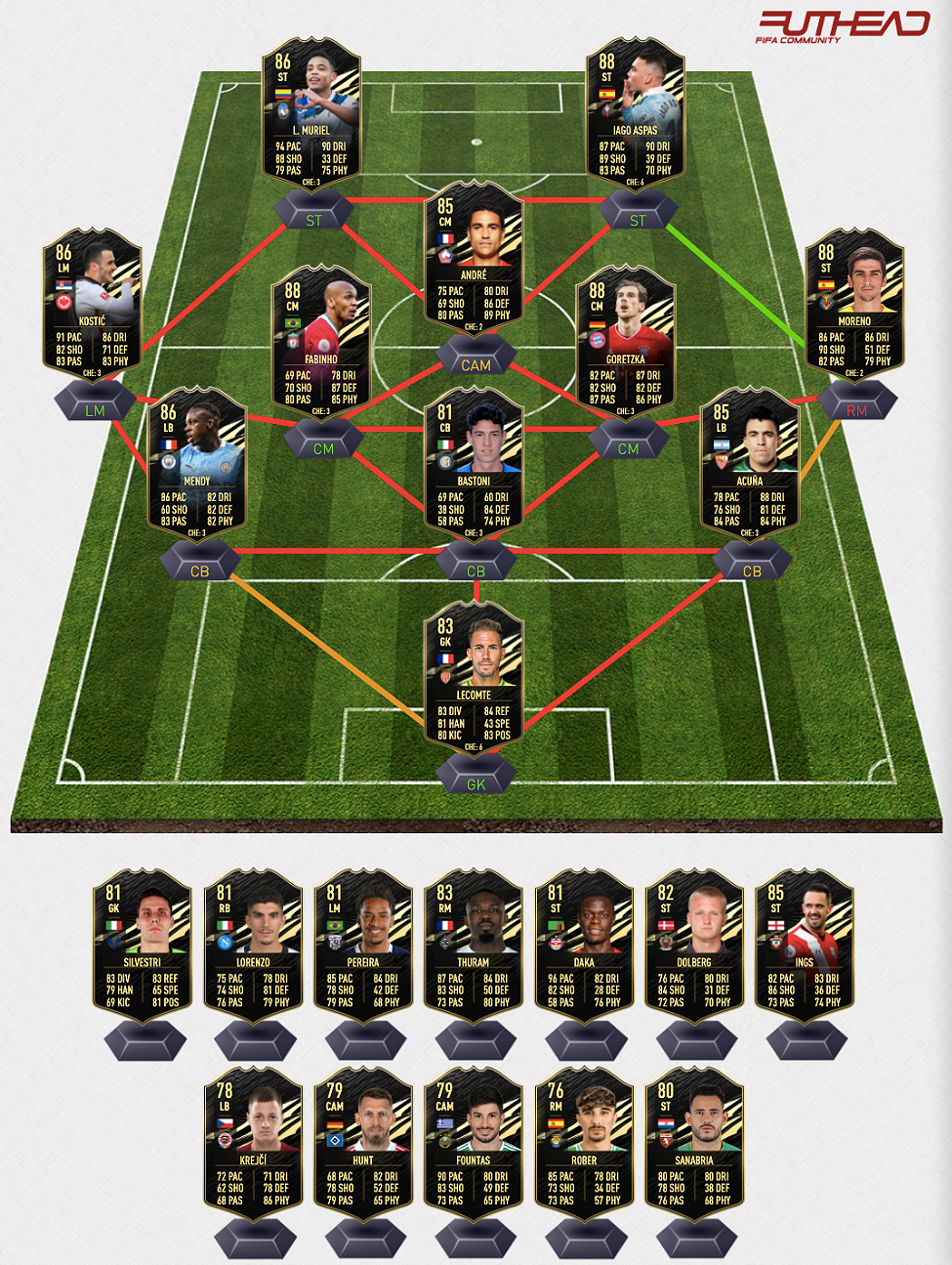 B. Lecomte GK – AS Monaco - 80 -> 83 Rated: The starting goalkeeper could be everyone this week with no clear standouts and I'm taking the punt on Lecomte. Monaco pulled up to third in the standings after they defeated FC Metz 4-0 and despite Lecomte just made a total of 3 saves he got a 7 match rating from L'Equipe which might be enough for him to make it.

B. Mendy LB – Manchester City - 84 -> 86 Rated: Manchester City recorded yet another convincing victory in the Premier League on Saturday, beating Leicester City 2-0 and are 14 points clear at the top of the ladder. Mendy enjoyed his runs and overlaps beyond the Leicester City back line, was tricky with his foot work and all translated it into a stunning goal, it was certainly a welcome return for him.

M. Acuna LB – Sevilla FC - 83 -> 85 Rated: The narrative was that the march international break came at a good time for Atletico Madrid, but Simeone's side have returned from that chance for a breather by losing 1-0 away at Sevilla. The only goal of the came from Marcos Acuna's second half header after a Jesus Navas assist and that win made the La Liga title race even tighter but even more important are the three points for Sevilla to stay fourth place with 12 points ahead of Real Betis.

A. Bastoni CB – Inter - 75 -> 81 Rated: Inter Milan took a giant stride towards lifting the Serie A title as they defeated Bologna 1-0 at Stadio Renato Dall'Ara on Saturday night in what was a tightly-contested encounter. Bastoni was solid at the back for large parts of the game and delivered a brilliant cross into the box leading to the only goal of the game scored by Lukaku.

B. André CM – LOSC Lille - 83 -> 85 Rated: Lille moved into pole position on the Ligue 1 title race thanks to a 1-0 win at Paris Saint-Germain on Saturday with a Jonathan David goal deciding a game in which was Neymar was sent off. The Lille midfielder covered every blade of grass for the visitors, producing one of the best performances by any player in Ligue 1 this season as he was omnipresent and played a key role in Lille's second line of press.

Fabinho CM – Liverpool - 87 -> 88 Rated: Liverpool returned to winning ways in the Premier League with an emphatic 3-0 victory at Arsenal thanks to goals from Diogo Jota and Salah. Fabinho finally was back in the midfield and showed that he's one of the world's best when he is deployed in his natural position. He had Arsenal's midfield trio on lockdown, not allowing a single move to go through him and deservedly picked up Man of the match.

L. Goretzka CDM – FC Bayern - 87 -> 88 Rated: Bayern Munich made a giant stride towards retaining their Bundesliga title by securing a hugely important 1-0 win over RB Leipzig which extended the gap at the top to seven points with just seven games remaining. It was again a typical Goretzka performance as the midfielder offered aggression in the middle of the park and scored the all-important winner for his side.

F. Kostic LM – Eintracht Frankfurt - 85 -> 86 Rated: A late winner from Andre Silva send Eintracht Frankfurt seven points clear of Borussia Dortmund, whose top-four hopes are in tatters. But it was Kostic who caused trouble all the game from his LM position and it was his cross which caused the own goal from Schulz and he also delivered the assist for Silva's late winner. There are no Kicker ratings yet due to Eastern holidays but Kostic looks like a strong candidate.

G. Moreno ST – Villareal CF - 87 -> 88 Rated: Villareal beat Granada 3-0 away in an impressive performance, picking up very important three points in the race for the international spots. Man of the match was the Spanish international Gerard Moreno who scored the game's three goals which was his first senior hat-trick. Two of the goals came from the penalty spot tho and therefore it's more like a 50/50 chance he'll feature or not but three goals just can't be ignored.

L. Muriel ST – Atalanta - 84 -> 86 Rated: Atalanta beat Udinese on Saturday to maintain pressure on AC Milan in pursuit of second place in Serie A. The Colombian only played the first half, yet he was comfortably the best player on the pitch. Not only scoring two goals, but his direct running with the ball also created problems for the opposition and has now hit 18 goals for the season in Serie A.

I. Aspas ST – Celta Vigo - 87-> 88 Rated: Celta Vigo recorded a comfortable looking victory as they beat Alaves away 3-1. Iago Aspas looks set to pick up his third inform after he was involved in all three goals with scoring one and assisting another two for his side.

M. Silvestri GK – Hellas Verona - 77 -> 81 Rated: Cagliari's survival hopes became even slimmer after suffering yet another loss as Hellas Verona ran out 2-0 winners in Serie A on Saturday afternoon. Goalkeeper options are not that clear and thus I'm opting for Hellas shot stopper Silvestri who made a total of five saves and picked up a 7 match rating from Gazzetta.

Di Lorenzo RB – Napoli -76 -> 81 Rated: Napoli got the better of Crotone in a seven-goal thriller at the Stadio Diego Armando Maradona, winning 4-3 on Saturday afternoon. Despite conceding three, Di Lorenzo got himself a goal and assist from the RB position, picked up a 7 match rating from Gazzetta and due to the lack of gold defender options I'm taking the punt on him.

M. Pereira LM – West Bromwich - 76 -> 81 Rated: West Brom thumped 10-man Chelsea 5-2 at Stamford Bridge to keep alive their faint hopes of Premier League survival and ended Chelsea run of 15 unbeaten games in a row. Pereira was a major threat even before Chelsea's collape and set the tone for the win with two very well taken goals in first half stoppage time and also assisted another two in the second half. Deservedly picked up Man of the Match.

M.Thuram RM – Borussia M'gladbach - 80 -> 83 Rated: Marcus Thuram scored a brace as Borussia Mönchengladbach came from behind to beat Freiburg 2-1 and climb to seventh in the table, keeping alive their hopes of European qualification. Kicker ratings aren't out yet but Thuram looks like one of the standouts in the Bundesliga.

P. Daka ST – RB Salzburg - 76 -> 81 Rated: Not sure how many times I've predicted Daka to get his first inform, he always got snubbed but now he should finally make it. That being said, Salzburg recorded a 3-1 win over Sturm Graz and Daka scored all three goals for his side which was the fastest hat-trick in the Bundesliga.

K. Dolberg ST – OGC Nice - 79 -> 82 Rated: OGC Nice clawed their way back into the top half of the table for the first time since September as a double from Kasper Dolberg – who hadn't scored since late October – proved enough to get the better of Nantes. He also picked up an 8 match rating from L'Equipe which should enough for him this week.

D. Ings ST – Southampton - 83 -> 85 Rated: Southampton battled their way back from an early 2-0 deficit to secure a huge Premier League win over Burnley on Sunday and potentially their top-flight status for another season. There are specualtions about the Saints striker but he showed why they need him. A clever assist to set up Armstrong's goal and then a brilliant run and finish to equalise alongside a 9 match ratings and MOTM should definetly be awarded with an inform.

L. Krejci LB – Sparta Praha - 71 -> 78 Rated: The first of the reserves players came from Sparta Praha in the name of Ladislav Krejci. Sparta recorded a 7-2 win over Teplice and Krejci socred three of the goals from the LB position which usually isn't his natural playing positon.

A. Hunt CAM – Hamburger SV - 73 -> 79 Rated: Despite taking a 3-0 lead against Hannover 96, Hamburger SV had to settle for a draw with the final whistle. All three goals for Hamburg came from Aaron Hunt and although the game ended in a draw I can't see him missing out.

T. Fountas CAM – Rapid Vienna - 72 -> 79 Rated: Another match which ended in a high score was between Rapid Vienna and Wolfsberger AC. Vienna took all three points with a 8-1 victory and the Greek striker Fountas scored three of the goals from the CAM position and should end up picking up an inform for it.

A. Sanabria ST – Torino - 74 -> 80 Rated: Torino came close to upsetting Juventus in Saturday's Derby della Mole, only to concede late to Cristiano Ronaldo to share points with their cross-city rivals. Sanabria was the standout for his side and nearly the hero of the derby, scoring twice to overturn Chiesa's opener and picked up POTW in Serie A.