FIFA 21 Team of the Week 27 Predictions

Published on by Simpleblue 8 Comments 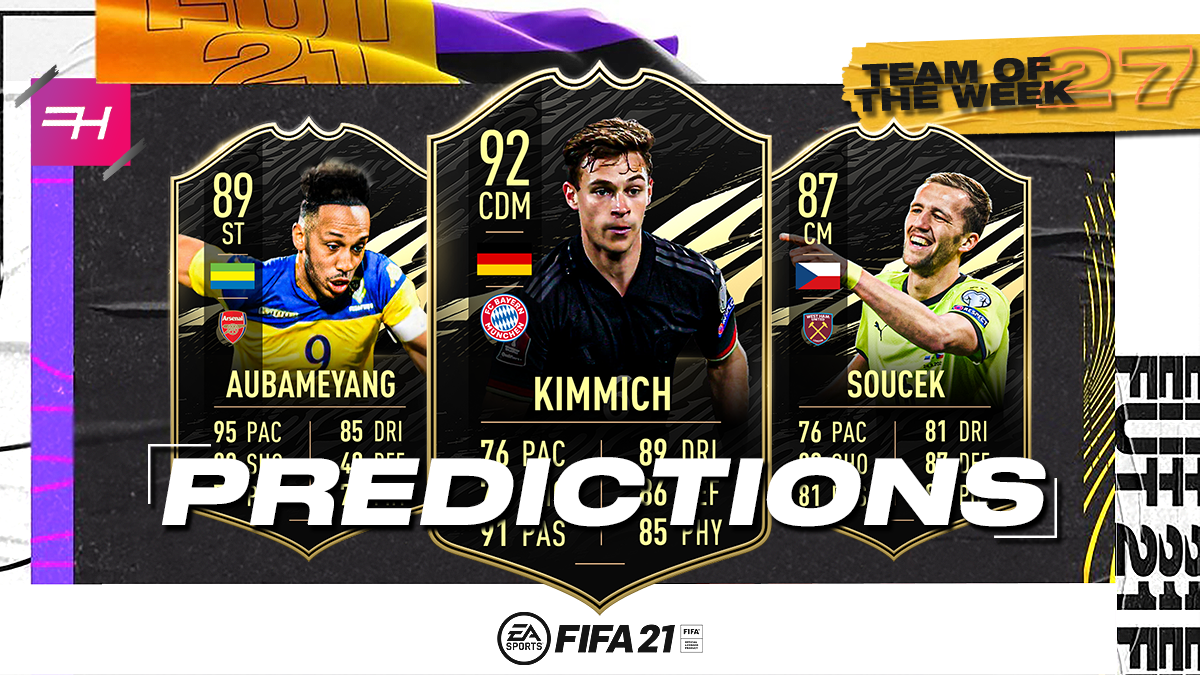 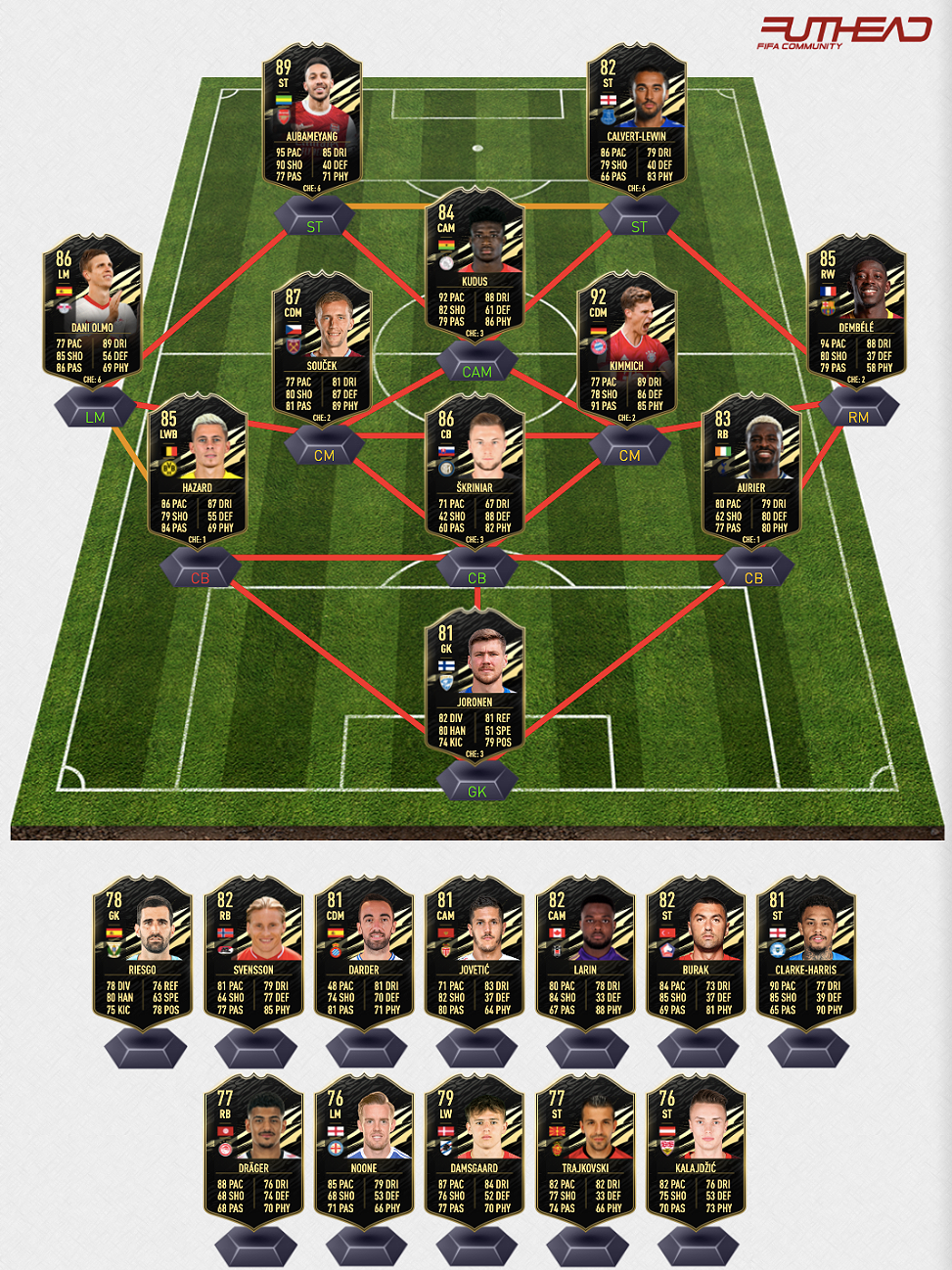 J. Joronen GK – Brescia - 75 -> 81 Rated: Goalkeepers is probably the hardest this week with no standout performances from any gold's and it could go both ways but I'm opting with Joronen who made a total of 5 saves, including a penalty save, in Finland's 2-2 draw in their opening fixture against Bosnia.

S. Aurier RWB – Tottenham Hotspur - 80 -> 83 Rated: Another African team who booked their ticket to next year's Total Africa Cup of Nations is two-time champions Cote d'Ivoire with a 3-0 win against Niger on Friday. Tottenham's defender Serge Aurier put in a superb display, scoring a goals and assisting two as the Elephants trampled Niger.

M. Skriniar CB – Inter Milan - 85 -> 86 Rated: There are a few defender options this week especially with clean sheets but I'm still going for Inter's Skriniar who helped his side fought back from behind against Malta with a goal and an assist to end the game in a 2-2 draw.

T. Hazard LWB – Borussia Dortmund - 83 -> 85 Rated: Belgium opened their FIFA World Cup 2022 qualifying campaign on a winning note as they came from a goal down to beat Wales 3-1. Man of the Match was Kevin De Bruyne but with him just recently being in TOTW25 and therefore is ruled out, the next best option is Thorgan Hazard who was very influential in the game, bagging a goal and an assist.

J. Kimmich CDM – Bayern Munich - 91 -> 92 Rated: Germany's start to the 2022 World Cup qualifier went well as they picked up a comfortable 3-0 win over Iceland in their opening fixture. Although he hasn't scored or assisted a goal directly, Kimmich was one of the best players on the pitch. His vision and range of passing were evident throughout the game and he had a hand in all three goals by kickstarting the move that led to them. A leaders performance and a 2 match rating from Kicker could be enough an inform.

T. Soucek CDM – West Ham - 86 -> 87 Rated: The Czech Republic began their qualifying campaign for the 2022 World Cup against Estonia in the best possible way with a convincing 6-2 win. Star of the show was West Ham's midfielder Soucek who scored a hat-trick for his side, this would already be his third inform which makes his TOTS item even more incredible.

O. Dembélé RW – FC Barcelona - 83 -> 85 Rated: After a disappointing draw against Ukraine, France got their 2022 World Cup qualifying campaign up and running after an unconvincing 2-0 win over minnows Kazakhstan. Ousmane Dembele led the line for France, where he continued his fine run of form with a well-taken goal and had an excellent chance to score but headed straight at Mokin. He just scored one goal and picked up a 7 match rating from L'Equipe but nearly no standout options he could make it.

D. Olmo LM – RB Leipzig - 84 -> 86 Rated: Spain surprisingly drew their opening fixture of the 2022 World cup qualifying campaign against Greece and were staring at a second consecutive 1-1 draw after coming back from behind until Dani Olmo scored in the second minute of second-half stoppage time to earn Spain a dramatic 2-1 win.

M. Kudus CAM – Ajax - 81 -> 84 Rated: A second inform which could potentially be overpowered could come in the name of Mohammed Kudus. Ghana faced Sao Tome in the African Cup of Nations and did what was expected with a 3-1 win. Ajax' midfielder Kudus got himself two assists in this game and could pick up his second inform on Wednesday.

Calvert-Lewin ST – Everton - 79 -> 82 Rated: England opened their qualifier campaign with an emphatic 5-0 victory over San Marino at Wembley, not a real surprise as it was an extremely one-sided affair. There were a few Man of the Match worthy performances but the award went to Calvert-Lewin who grabbed a brace and made sure his side started the campaign with all three points.

Aubameyang ST – Arsenal - 92 -> 93 Rated: While the 2022 World Cup qualification started, the Afcon qualifiers are in full swing and Gabon booked their ticket to Cameroon after a well worked 3-0 victory over DR Congo. One who caused problems all the game was Arsenal's skipper Aubameyang who assisted one goal and then added a goal to his tally four minutes before the final whistle to seal Gabon's place in Cameroon.

Riesgo GK – CD Leganes - 71 -> 78 Rated: It hard to fill the reserves this week with no hat-tricks from silver's so I'm going with a third goalkeeper this week. CD Leganes picked up a point with a man down against Almeria and Leganes' goalkeeper Riesgo was absolutely insane with a total of eleven saves to deny Almeria from scoring the winner.

J. Svensson RB – AZ Alkmaar -78 -> 82 Rated: Norway started well to their 2022 World Cup qualifier campaign with a convincing 3-0 win over Gibraltar midweek and Alkmaar's full-back Svensson got on the scoresheet with one goal.

S. Darder CDM – Espanyol Barcelona - 77 -> 81 Rated: One of the few leagues in action during the international break was Spain second league and Espanyol Barcelona defeated CD Castellon 3-1. Sergi Darder scored two goals for his side from CDM which should be enough for him to pick up the inform.

C. Larin CAM – Besiktas - 79 -> 82 Rated: Canada's Men's National Team took a positive first step on the road to Qatar 2022 with an energetic performance winning 5-1 over Bermuda after a 16-month layoff. Forward Cyle Larin led the way for Canada with a hat-trick and should be set for his second inform.

S. Jovetic CAM – AS Monaco - 77 -> 81 Rated: A player I personally liked a lot in recent Fifa's could potentially pick up his first inform this week. Montenegro played twice so far and Jovetic was involved in the goals in both games. Two goals in their 2-1 win over Latvia and another goal in their 4-1 win over Gibraltar should be enough for him.

Burak Yilmaz ST – LOSC Lille - 78 -> 82 Rated: Netherlands quest for a World Cup return got an unexpected bump as Turkey defeated them 4-2 and started their own qualifying campaign with a bang. The 35-years old attacker Burak Yilmaz was the star of the show as he scored a brilliant hat-trick, including a siblime free-kick which was the icing on the cake.

M. Dräger ST – Olympiacos - 69 -> 77 Rated: Not easy to fill the reserves this week and therefore I'm going with Dräger from Olympiacos. Tunisia played two games in the qualification for the Africa Cup of Nations and Dräger got himself a goal and assist in Tunisia's game which they have won 5-2 against Libya.

C.Noone LM – Melbourne City - 67 -> 76 Rated: The reserves are always hard to fill with no hat-tricks during international breaks so I'm happy to include Craig Noone and heopfully he'll make it. Melbourne City defeated Wester Sydney Wanderers 4-1 in the A-League and Noone scored two of the goals and assisted another for his side.

M. Damsgaard LW – Sampdoria - 73 -> 79 Rated: As I said before, there are not hat-tricks this week for the reserves so I'm even happier that Damsgard got himself two goals and two assists in Denmark's 8-0 demolition against Moldova on Sunday evening.

Kalajdzic ST – VfB Stuttgart - 67 -> 76 Rated: I'm not completely sure with reserves this week and some might miss out but one should make it is Stuttgarts Kalajdzic. Austria played two set of games and Kalajdzic scored in both. In Detail he got two goals in Austria's 2-2 draw against Scotland and scored another in their 3-1 win over Faroe Islands.

Trajkovski ST – RCD Mallorca - 69 -> 77 Rated: North Macedonia kept pace with group favourite's Germany before their clash on Wednesday with a convincing 5-0 win over Liechtenstein. Two of the goals came from Trajkovski and due to the lack of hat-tricks this week in reserves there's a good chance he'll make it.