FIFA 21 Team of the Week 26 Predictions

Published on by Simpleblue 60 Comments 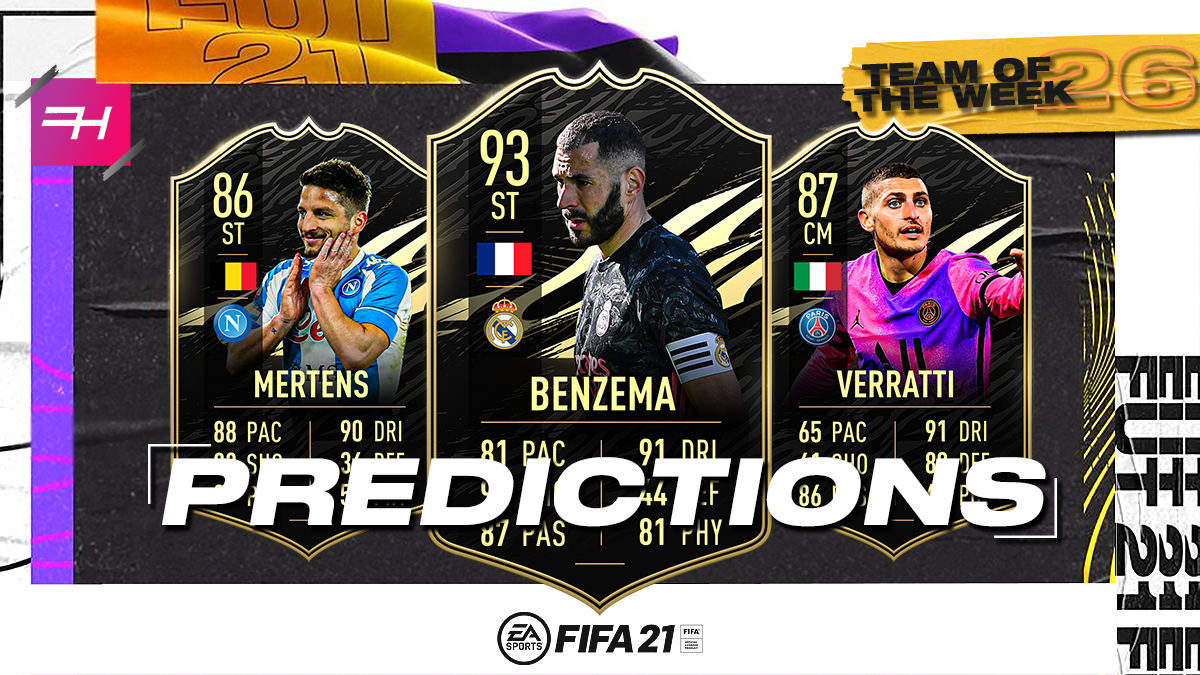 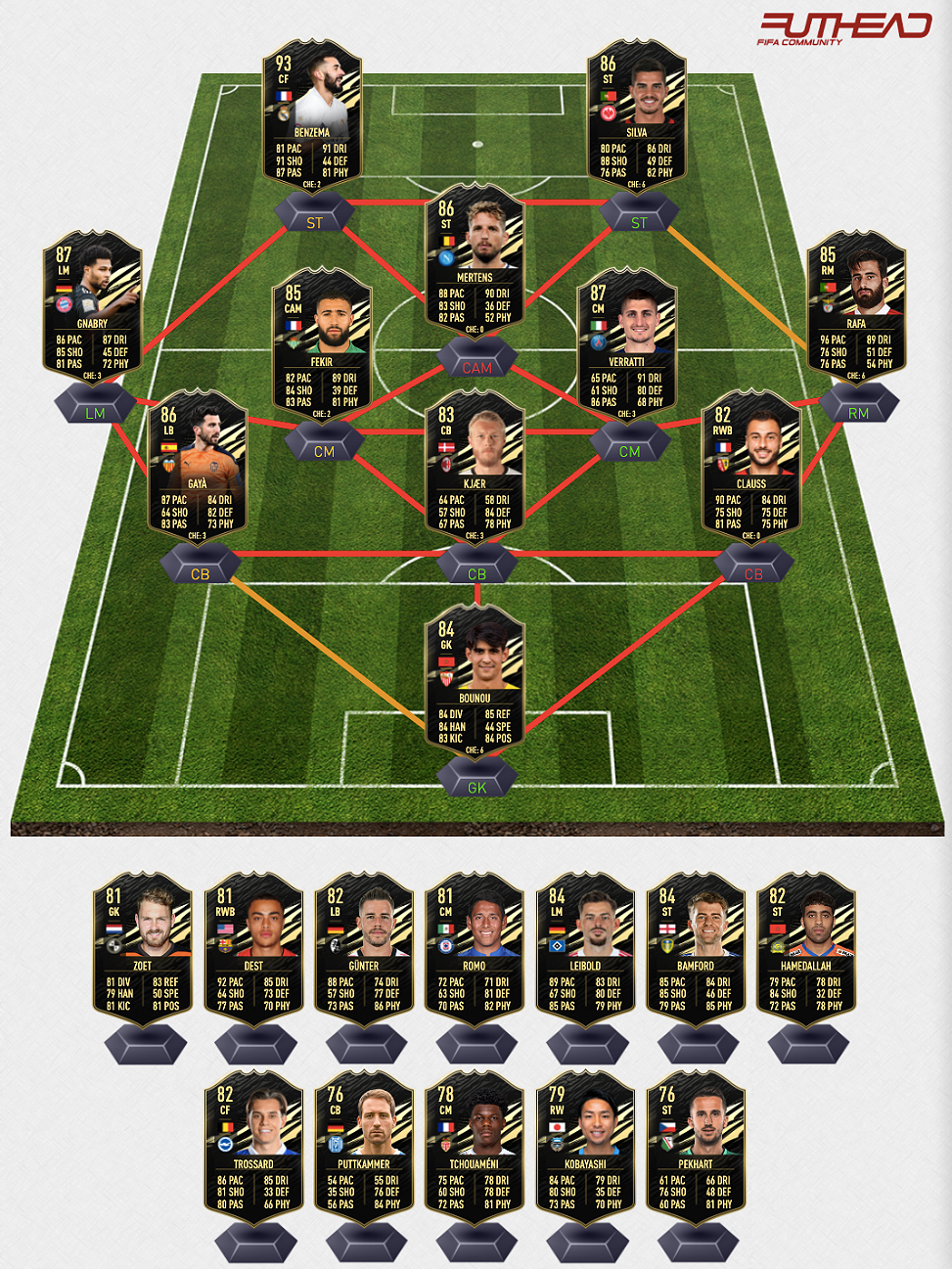 Y. Bounou GK – FC Sevilla - 81 -> 84 Rated: FC Sevilla drew 1-1 against a strong Valladolid side on the weekend and the unlikely saviour for Sevilla was goalkeeper Bono as he netted deep into stoppage time to salvage the draw. Even though he just made a total of 3 saves a goal for a keeper is pretty rare and therefore I can see him getting in.

Gaya LB – FC Valencia - 85 -> 86 Rated: With not much high rated options available this week I'm going to include Gaya for his possible second inform. Valencia picked up all three points after a narrow 2-1 win at home against Granada and Gaya got himself an assist from left-back.

S. Kjaer CB – AC Milan - 80 -> 83 Rated: AC Milan secured three huge points at Fiorentina, thus making the most of Juventus' loss to Benevento earlier. It was far from easy for Milan but despite condeding two goals the Dane Kjaer defended well as usual for his side and more important recorded two assists for his side, showing his attacking skills.

J. Klauss RWB – RC Lens - 74 -> 82 Rated: A player who's TOTS item could be amazing if he keeps his form is Clauss. RC Lens defeated Strasbourg 2-1 and Clauss once again was involved in both goals, this time with assisting them from the RWB position. An 8/10 match rating from L'Equipe could be enough for him to pick up his second inform after being featured as a silver star weeks ago.

M. Verratti CM – Paris SG - 86 -> 87 Rated: PSG beat Olympique Lyonnais 4-2 to go top of the Ligue 1 table with just eight games remaining this season. Mbappé is unlikely due to his recent POTM so I'm going with Verratti who was key to PSG's opening goal and setted up Mbappé for his second goal of the game.

N. Fekir CAM – Betis Sevilla - 83 -> 85 Rated: Betis Sevilla bounced back after their defeat in the derby last week with a convincing 2-0 win at home against Levante. The Frenchman Fekir got himself a goal and with the lack of higher rated midfielders this week I can see him getting in on Wednesday.

Rafa RM – SL Benfica - 83 -> 85 Rated: The top game in Liga NOS between Braga and Benfica ended in a 2-0 away win for Benfica and Rafa got himself a goal and an assist to help his side securing three important points in the race for the Champions League spots.

S. Gnabry LM – FC Bayern - 86 -> 87 Rated: Bayern Munich continued to cruise in the Bundesliga as they clinched the fourth win in a row on Saturday with a 4-0 win against Stuttgart with ten men after Davies was sent off early. Lewandowski once again was the start of the show with three goals but with him just recently being in TOTW I'm going with Gnabry who got himself a goal and assist and picked up a 1.5 match rating from Kicker.

A. Silva ST – Eintracht Frankfurt - 84 -> 86 Rated: Eintracht Frankfurt continued their run for the Champions League spots next season and picked up three crucial points against Union Berlin ahead of their clash against Borussia Dortmund after the international break. The Portuguese forward Andre Silva once again was the main man for Frankfurt with two goals and one assist and could pick up another inform on Wednesday.

D. Mertens ST – Napoli - 85 -> 86 Rated: Dries Mertens made the difference for Napoli as he scored both goals in the Partenopei's 2-0 victory away to AS Roma on Sunday evening in Serie A, the victory means that Napoli are now outright fifth in the SerieA table with 52 points.

K. Benzema ST – Real Madrid - 92 -> 93 Rated: Real Madrid kept pace with league leader Atletico Madrid following a 3-1 win away against Celta Vigo. After being snubbed last week, Benzema once again looks like he's set for an inform after he got himself two goals and one assist and I would be shocked if he is going to miss out again.

J. Zoet GK – Spezia - 76 -> 81 Rated: Spezia defeated Cagliari 2-1 in Serie A on Saturday evening at the Stadio Alberto Picco, and in doing so made the Sardinians’ top-flight survival chances even slimmer. Spezia's keeper was the match winner with a total of 6 saves for his side and picked up an 8 match rating from Gazzetta.

C. Günter LB – SC Freiburg - 78 -> 82 Rated: A decent looking full-back could come from the Bundesliga this week in the name of Günter. The German got himself an assist in Freiburg's 2-0 win over Augsburg on Sunday and picked up MOTM from Kicker which could be enough for him although Bundesliga provides a few more defender options.

L. Romo CM – Cruz Azul - 75 -> 81 Rated: A position changed inform could come from the Liga MX. Cruz Azul defeated Atlas with 3-1 and Romo, who played a CM position, got himself all three assists in this game.

T. Leibold LM – Hamburger SV - 81 -> 84 Rated: Hamburger SV kept their direct promotion hopes alive as they defeated Heidenheim 2-0 at home on Saturday. Both goals came from Leibold who played LM in this game.

Hamdallah ST – Al Nassr - 79 -> 82 Rated: This is one who could easily miss out but with the lack of strikers with 2 or more goals this week I'm going to take the punt on Hamdallah. Al Nassr steamrolled Al-Batin 7-0 and Hamdallah got himself two goals and one assist in this game. One goal was from the penalty spot tho so that might be something going against him.

P. Bamford ST – Leeds Utd. - 82 -> 84 Rated: With not a lot of option from the Premier League due to the FA Cup fixtures Bamford is a serious option for TOTW after he got himself one goal and one assist in Leeds' narrow 2-1 win over Fulham.

L. Trossard ST – Brighton & Hove - 78 -> 82 Rated: Brighton Hove have taken a big step towards Premier League safety after a blistering 3-0 win over hapless Newcastle United. Trossard opened the scoring with his goal and also provided the assist for Welbeck.

Puttkammer CB – SV Meppen - 66 -> 76 Rated: With only one player in the reserves with three or more goals this week it's going to be harder to fill the remaining spots but one who looks likely to be in is Puttkammer who scored both goals for his side against Bayern Munich II.

Tchouameni CDM – AS Monaco - 71 -> 78 Rated: This is a pick who could very likely be the silver star this week but as mentioned earlier, players for reserves are harder to pick this week and therefore I'm including Tchouameni who got himself a goal and an assist in Monaco#s 4-0 win over Saint-Etienne.

Kobayashi RW – Kawasaki Frontale - 73 -> 79 Rated: One who should definetly make it this week after being snubbed recently is the Japanese forward Kobayashi. He scored two goals and assisted another in Kawasaki's 5-0 win against Urawa Red Diamonds.

T. Pekhart ST – Legia Warszawa - 67 -> 76 Rated: The only player who scored three or more goals this week in the reserves is Pekhart from Legia Warszawa. His side won their fifth consecutive league game 4-0 against Zaglebie and Pekhart scored all four goals, helping his side remaining nine points clear at the top.