FIFA 21 Team of the Week 25 Predictions

Published on by Simpleblue 32 Comments Updated on 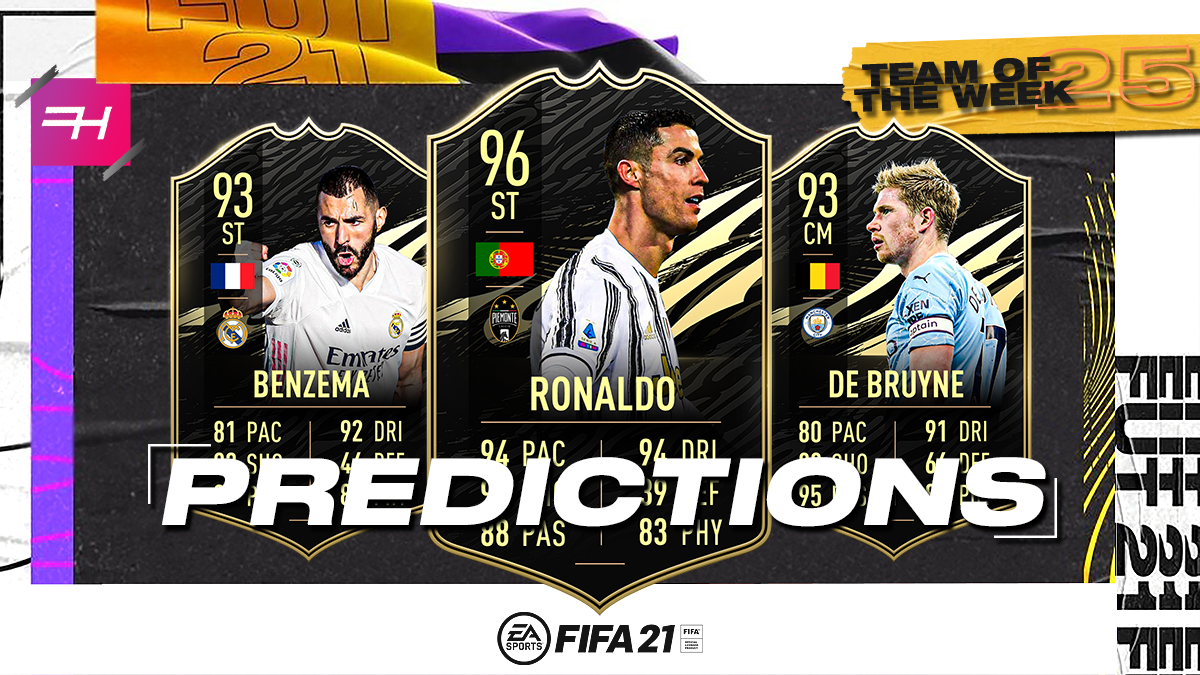 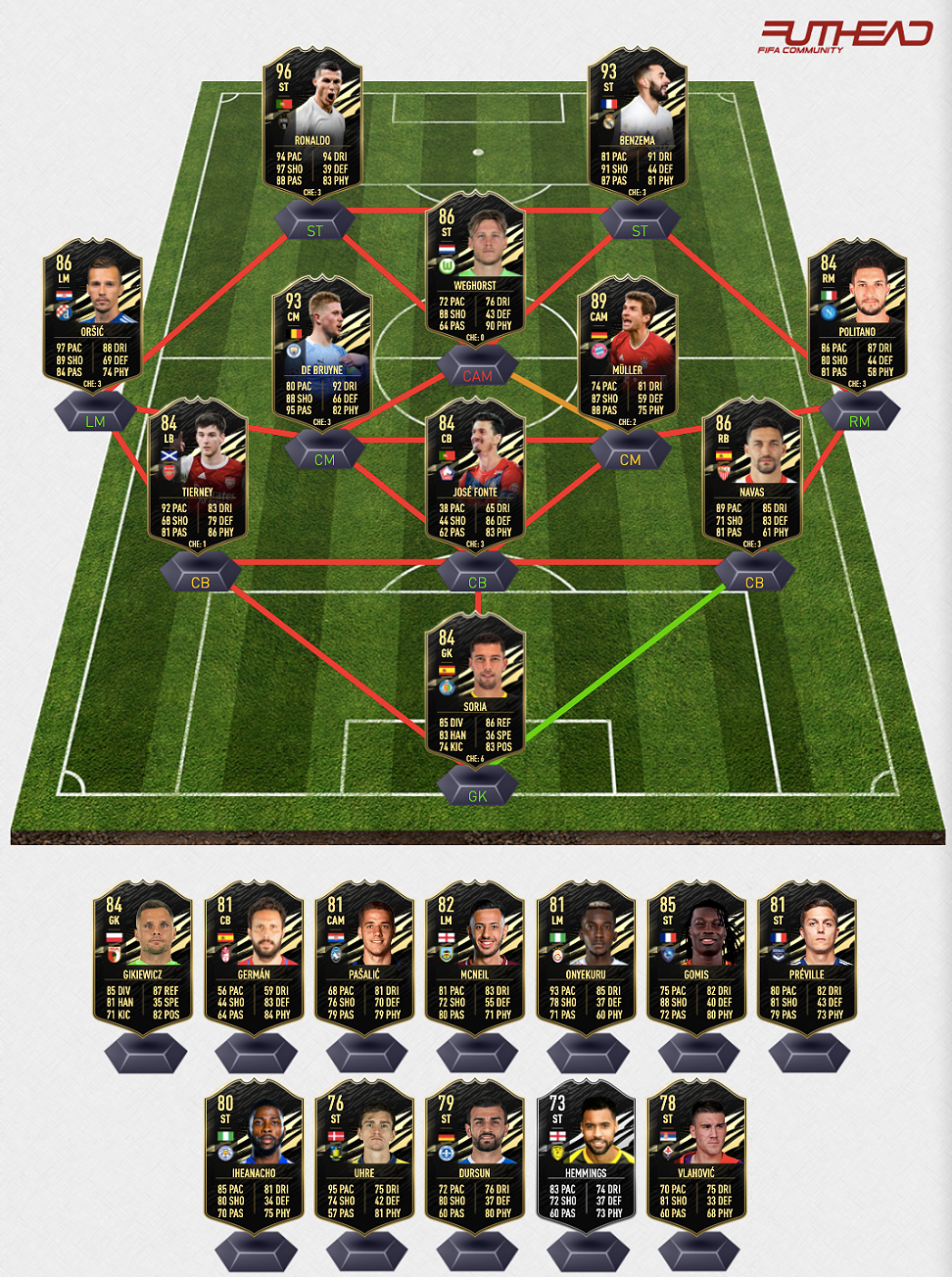 David Soria GK – FC Getafe - 82 -> 84 Rated: There are not a lot of standout performances when it comes to goalkeepers but one I expect to make it is Getafe's shot stopper Soria. Getafe managed to secure a point in their fixture against Atletico Madrid and Soria was the main reason for it with a total of seven saves.

J. Navas RB – FC Sevilla - 84 -> 86 Rated: FC Sevilla earned bragging rights in El Gran Derbi as they ran out 1-0 winners over Real Betis at the Estadio Ramon Sanchez Pizjuan and strengthened their position in the race for the Champions League places. The only goal came from En-Nesyri and was assisted by Jesus Navas who overall had a great game. With the game being a Derby and the lack of higher rated defenders this week Navas definetly is a serious option for an inform.

J. Fonte CB – LOSC Lille - 82 -> 84 Rated: Despite drawing 0-0 with AS Monaco, LOSC went three points clear atop the standings as PSG fell to a shock 2-1 defeat. There are two serious options from this game and I've gone with Jose Fonte who played a big part in this game and helped his side recording the 16th clean sheet of the season.

K. Tierney LB – Arsenal - 82 -> 84 Rated: Arsenal London secured north London braggings rights as they came from behind to beat Tottenham 2-1 in the Premier League on Sunday. Smith-Rowe was named MOTM in this game but with him being silver and the amount of hat-tricks from silvers this week it's impossible to include him and the next best option is Kieran Tierney who delievered the assist for the equaliser and was offensively sensational too.

De Bruyne CM – Manchester City - 92 -> 93 Rated: Manchester City returned to winning ways against a determined Southampton on Wednesday evening with a 5-2 home win. Mahrez once again was world-class but with him recently being included I'm opting with Kevin De Bruyne who got himself two goals and took a big stride towards returning to his usual form. Including De Bruyne is a bit of a punt but I think we will definetly see a Manchester City player in TOTW.

T. Müller CAM – FC Bayern - 88 -> 89 Rated: Bayern Munich recorded a comfortable 3-1 win at Werder Bremen in a game which could have ended in a way higher score and Lewandowski moving second in the Bundesliga's all-time scoring charts. It was a classic Thomas Müller performance this afternoon as he registered two assists for his side and especially the second one was a technical masterclass.

M. Orsic LM – Dinamo Zagreb - 84 -> 86 Rated: Another debatable pick is Orsic. He just recently got a MOTM item from the Europa League but with him scoring two goals and assisting another two in Zagreb's 5-0 win over Varazdin it's hard to ignore him.

M. Politano RM – Napoli - 81 -> 84 Rated: AC Milan suffered a major blow to their Serie A title hopes on Sunday after they've lost their home fixture against Napoli 0-1. The only goal came from Matteo Politano in the second half and despite him not having his greatest game for Napoli he got a 7 match rating from Gazzetta which was enough in the past for players to surprisingly make it.

W. Weghorst ST – VFL Wolfsburg - 84 -> 86 Rated: Wolfsburg had their nine-match unbeaten run ended last week at Hoffenheim but bounced back in style against bottom-placed Schalke 04 with an impressive 5-0 home win. Wout Weghorst continued his form, scoring one goal and assisted two more and looks set to pick up his second inform on Wednesday.

K. Benzema ST – Real Madrid - 92 -> 93 Rated: Real Madrid left it late but saw off a spirited Elche 2-1 at the Alfredo di Stefano in a La Liga game to keep their title hopes alive. Karim Benzema was the hero for the reigning champions as the Frenchman scored twice after the breal, cancelling out the goal for the visitors with a sensational winner in stoppage time.

C. Ronaldo ST – Piemonte Calcio - 95 -> 96 Rated: Juventus brushed Cagliari aside 3-1 at the Sardegna Arena on Sunday evening in the Serie A to stay top three in the 2020/2021 campaign. A Cristiano Ronaldo first-half hat-trick proved to be enough for the Bianconeri to claim all three points but this is a very debatable inclusion as Ronaldo got his last inform in TOTW22 but EA have been very inconsistent recently when it comes to inform picks so that is definetly a big punt I'm going to take.

R. Gikiewicz GK – FC Augsburg - 81 -> 84 Rated: Gladbach remain without a Bundesliga win since mid-January after being caught cold by a clinical Augsburg side, who took all three points in a 3-1 win on Friday evening. One of the reason was the Polish goalkeeper Gikiewicz who made a total of six saves against Gladbach and was named Player of the Week in Germany.

G. Sanchez CB – Granada CF -77 -> 81 Rated: There are a few options for lower rated gold defenders this week and one of them is the Spanish defender German who scored the only goals in Granada's 1-0 win over Real Sociedad and also helped his side to keep a clean sheet.

McNeil LM – FC Burnley - 78 -> 82 Rated: FC Burnley moved seven points clear of the Premier League relegation zone with a vital 2-1 victory at Everton. The only possible inclusion from this match is Dwight McNeil who scored a wonderful goal and also worked well defensively to help his side claiming all three points.

Onyekuru LM – Galatasaray - 77 -> 81 Rated: Galatasaray kept their title hopes in the Turkish Super League alive with a convincing 3-0 win away at Kayserispor. Two of the goals came from Onyekuru after he was subbed in and it could be enough for him for his first inform.

M. Pasalic CAM – Atalanta Bergamo - 77 -> 81 Rated: Atalanta Bergamo climbed back into Serie A's top four after their 3-1 win over Spezia at the Gewiss Stadium on Friday evening. The standout player this evening was Pasalic who played at CAM and scored twice in the second half to help La Dea on their way and although he just got a 7 match rating from Gazzetta I think he should make it.

De Preville ST – G. Bordeaux - 75 -> 81 Rated: With five draws in the Ligue 1 it's difficult to make a selection of players this week, one of them who could make it tho is De Preville. Bordeaux took all three points with a 3-1 win away to Dijon and the French forward got himself one goals and one assist and also picked up an 8 match rating from L'Equipe.

B. Gomis ST – Al Hilal - 83 -> 85 Rated: Al Hilal kept their recent good form in the Saudi Professional League with a 4-2 win against Al Wehda and so did Gomis. The Frenchman scored three of the four goals, one from the penalty spot, and we might see his second inform on wednesday.

M. Uhre ST – Brondby IF - 66 -> 76 Rated: Unlike the last couple of weeks there have been quite a lot hat-trick when it comes to players for the reserves. One of them came from Denmark where Brondby IF managed to stay top of the league after they've beaten OB with 3-0 away. Mikael Uhre scored all three goals for his side and should be locked for getting an inform.

Iheanacho ST – Leicester City - 74 -> 80 Rated: Leicester City blew an abject Sheffield United side away at the King Power Stadium with an impressive 5-0 win. Star of the show was Kelechi Iheanacho who took advantage of two gorgeous assists from Vardy and then absolutely thundered one in for his hat-trick.

K. Hemmings ST – Burton Albion - 63 -> 73 Rated: Another silver inform seems to be on the way and this weeks it's Hemmings who got himself a hat-trick in Burton Albion's 3-0 win away against Crewe.

S. Dursun ST – SV Darmstadt 98 - 72 -> 79 Rated: Last but not least we're coming to another hat-trick in the reserves with Dursun. Darmstadt recorded a 4-1 home win over Aue on Saturday and Dursun scored three of the four goals for his side which was the first hat-trick in his career.

Vlahovic ST – Fiorentina - 70 -> 78 Rated: Fiorentina recored their biggest win of the season by beating Benevento 4-1 on Saturday to boost their Serie A survival hopes. The one who stars was Dusan Vlahovic who scored a hat-trick, helping his side secure three massive points and deservedly picked up an 8 match rating and MOTM.