FIFA 21 Team of the Week 24 Predictions

Published on by Simpleblue 54 Comments 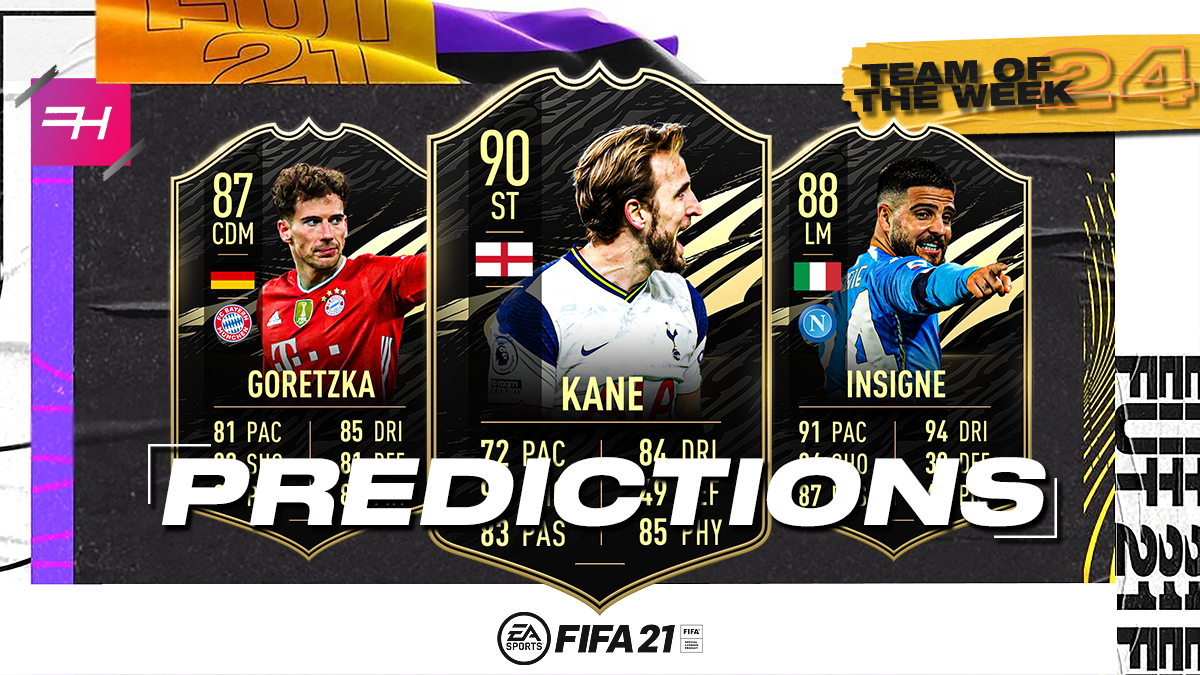 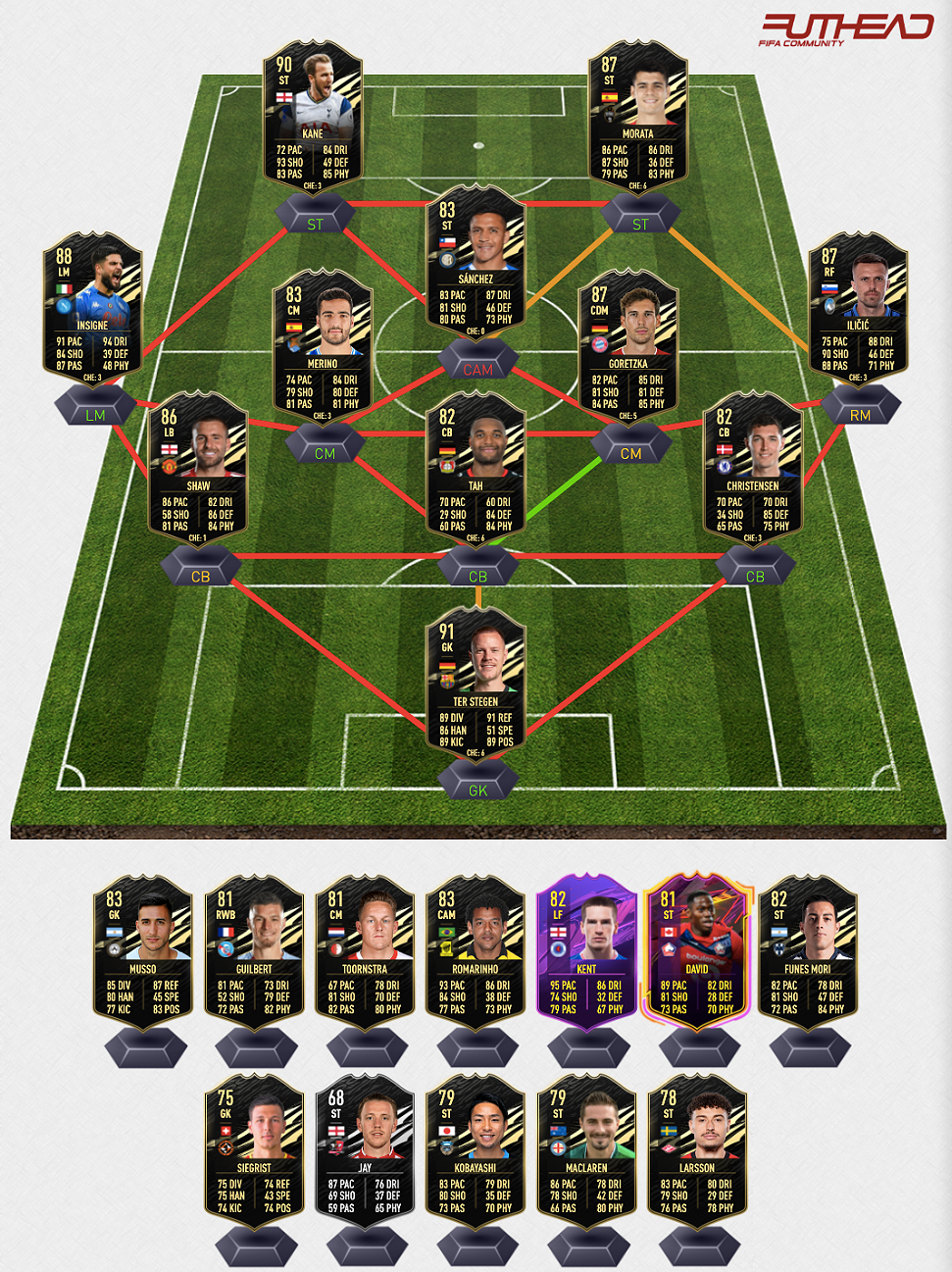 Ter Stegen GK – FC Barcelona - 90 -> 91 Rated: Probably the most difficult position to pick this week because there are no real standout performances and due to this I'm taking the punt on Ter Stegen. Barcelona recorded a 2-0 win over Osasuna and the German international made a total of four saves. Not that much compared to some other, lower rated options but he had two important saves early to deny Osasuna from taking the lead. He also picked up a 3/3 match rating from Marca even though Marca not seems to be that reliable these days anymore.

J. Tah CB – Bayer Leverkusen - 79 -> 82 Rated: A late winner from Patrik Schick condemned Borussia Mönchengladbach to a third straight defeat in the Bundesliga as Bayer Leverkusen took home all three points in the Rhine derby. The German international Tah was unbeatable in the air and on the ground against Gladbach's strikers and deservedly picked up a 1.5 match rating and MOTM from Kicker.

Christensen CB – FC Chelsea - 79 -> 82 Rated: FC Chelsea claimed their first victory at Anfield since 2014 thanks to a stunning goal from Mason Mount and moved back into the Premier League top four. With Thiago Silva still out, Christensen started in the heart of the back three and once again he impressed. Most important was his tackle against Mane when he had broken through, an 8/10 and MOTM is the result.

L. Shaw LB – Manchester United - 84 -> 86 Rated: Manchester City's amazing 21-game winning run in all competitions was ended by their crosstown rivals and away-day specialists as Manchester United won 2-0 at the Etihad Stadium. It was another outstanding performance from Luke Shaw, both in limiting Mahrez' chances but forcing City back with his driving runs and scored a vital goal to make it 2-0 for his side.

L. Goretzka CDM – Bayern Munich - 86 -> 87 Rated: Bayern Munich made it two wins in a row in the Bundesliga, but the latest victory was sweeter as they defeated Borussia Dortmund at Allianz Arena with 4-2 after recovering from a two-goal deficit. Lewandowski got MOTM for his three goals but with him being included in the actual TOTW I'm opting for Leon Goretzka who should have been in last week for his three assists. This time he only got one goal but it was the decisive one to make it 3-2. Kicker awarded him with a 2 match rating, the other possible player could be Leroy Sané who also got a 2 from Kicker for his assist.

Mikel Merino CM – Real Sociedad - 80 -> 83 Rated: La Liga options are quite rare this week especially when it comes to midfielders but Mikel Merino scored the only goal in Real Sociedad's narrow 1-0 win over UD Levante and although he didn't get the highest possible match rating he has a chance to make it.

L. Insigne LM – Napoli - 87 -> 88 Rated: Napoli recorded a hard-fought 3-1 win over Bologna on Sunday and even though it looked like it was comfortable it wasn't. Two of the goals came from Lorenzo Insigne from the LM and it looks like he will pick up his next special card on Wednesday after Gazzetta awarded him with a 7.5 match rating.

J. Ilicic RW – Atalanta Bergamo - 86 -> 87 Rated: An impressive second half allowed Atalanta to stroll a 5-1 win over bottom-placed Crotone at the Gewiss Stadium on Wednesday evening, recording a fourth straight win for the first time this season. The Slowenia interantional Josip Ilicic got himself a goal and an assist in the second half of the game, helping his side securing three important points in the race for the Champions League spots.

A. Sanchez ST – Inter Milan - 80 -> 83 Rated: Inter Milan still leads the Serie A table with 3 points and a game in hand after their 2-1 win over Parma Calcio midweek. Alexis Sanchez started the game ahead of Martinez and paid it back with a brace in the second half and Gazzetta awarded him with a 7.5 match rating and MOTM.

A. Morata ST – Piemonte Calcio - 86 -> 87 Rated: Juventus fought back from a goal down to beat Lazio Roma 3-1 at the Allianz Stadium in an enticing Serie A clash and re-staked their claim in the title race. Morata started ahead of Ronaldo and had a fine outing, producing an assist and scored two goals including an unstoppable finish to cap of a counter-attack. A 7.5 match rating and MOTM should be enough for another inform for the Spaniard.

H. Kane ST – Tottenham Hotspur - 89 -> 90 Rated: Tottenham Hotspur brushed Crystal Palace aside on Sunday to claim a 4-1 victory and made it three wins on the bounce in the Premier League. Kane was at his devastating best, oozing quality from all parts of the pitch. He also brought his playmaking abilities the fore and got the assists for both of Bale's goals and then found the back of the net with a sumptuous finish for the third goal before rounding off the game with another goal to his tally.

J. Musso GK - Udinese - 80 -> 83 Rated: As said earlier, goalkeepers are hard to pick this week with a lot of options available but I've decided to go with Musso who made a total of six saves in Udinese's late 1-1 draw midweek against AC Milan.

Guilbert RWB – Racing Strasbourg -76 -> 81 Rated: The league's longest unbeaten run came to close as AS Monaco were beaten 1-0 by a resurgent Strasbourg side at the Stade de la Meinau. The only goal of the game came from Right wing-back Guilbert and was enough the end Monaco's 12-match unbeaten streak and with him being gold and picking up an 8/10 match rating it's very likely he'll make it into the team.

J. Toornstra CM – Feyenoord - 75 -> 81 Rated: A game a lot of people probably watched due to Fer's recent What IF SBC was Feyenoord against Venlo and Feyenoord proved too strong for Venlo as they eased to a 6-0 victory and confirmed Fer's upgrade after just one game. Toornstra played his 250th game for the club and it was a great one where he got himself two goals and picked up an 8 match rating from Vl.

Romarinho CAM – Al Ittihad - 74 -> 83 Rated: Al Ittihad remains in the top three in the Saudi League after they beat Al Wehda 4-2 at home on Friday night. Three of the goals came from the Brazil midfielder Romarinho who looks very likely to pick up his second inform after his silver star item a few weeks ago.

Ryan Kent LW – Glasgow Rangers - 79 -> 82 Rated: Glasgow Rangers won the Scottish Premiership for the first time since 2012 after they beat St. Mirren 3-0 and Celtic only managed to draw the fixture. Ryan Kent scored a brilliant opener and was up there alongside Morelos as the best on the pitch. He caused a lot of problems for the St. Mirren defence and with the importance of the game I can see him pick up a Hero card.

Fuenes Mori ST – Monterrey - 78 -> 82 Rated: There have been a few gold strikers this week who can make it and one of them is Fuenes Mori who got two goals and one assists in Monterrey's 6-1 win over Juarez and also scored another two goals in Monterrey's second game they've played.

J. David ST – LOSC Lille - 77 -> 81 Rated: The Ligue1 top three remains wire-tight, separated by just three points. LOSC Lille had a last gasp-double from club-record signing Jonathan David to thank for their three-point haul over Marseille on Wednesday night the Canadian international banging home his eight and ninth goals of the campaign to keep his side atop of the standings.

Siegrist GK – Dundee United - 65 -> 75 Rated: Celtic Glasgow finally relinquished their nine-years grip on the Scottish Premiership title after a frustrating 0-0 draw at Dundee United confirmed Rangers as champions. The reason Celtic didn't score was Benjamin Siegrist who made a total of 12 saves for his side and even if some of Celtic attempts were straight at him he is MOTM without a doubt.

Kobayashi ST – Kawasaki Frontale - 73 -> 79 Rated: After last weeks inclusion of Ienaga from the J-League it looks like we will see the next inform from this league. That being said, Kobayashi scored two goals and got one assist on his side's 5-1 win.

J. Maclaren ST – Melbourne City - 73 -> 79 Rated: Another Derby took place in Australia on the weekend between Melbourne Victory and Melbourne City and the visitors went home with all three points after an impressive 6-0 win. Jamie Maclaren got himself one goal and two assists in this game and also scored both goals in their 2-0 win midweek.

J. Larsson ST – Spartak Moscow - 71 -> 78 Rated: With just one hat-trick this week for the reserves it will be a bit harder to pick players but one who definetly deserves to be in in Spartak Moscow's forward Larsson. Spartak cruised past Krasnodar 6-1 on Sunday and the Swedish striker got himself two goals and one assist.

Matt Jay ST – Exeter City - 58 -> 68 Rated: The only hat-trick in reserves this week is coming from Matt Jay. Exeter City went back to winning ways in the english League Two with a 4-0 home win against Leyton Orient and as said, Matt Jay scored three of the four goals for his side.