FIFA 21 Team of the Week 23 Predictions

Published on by Simpleblue 55 Comments 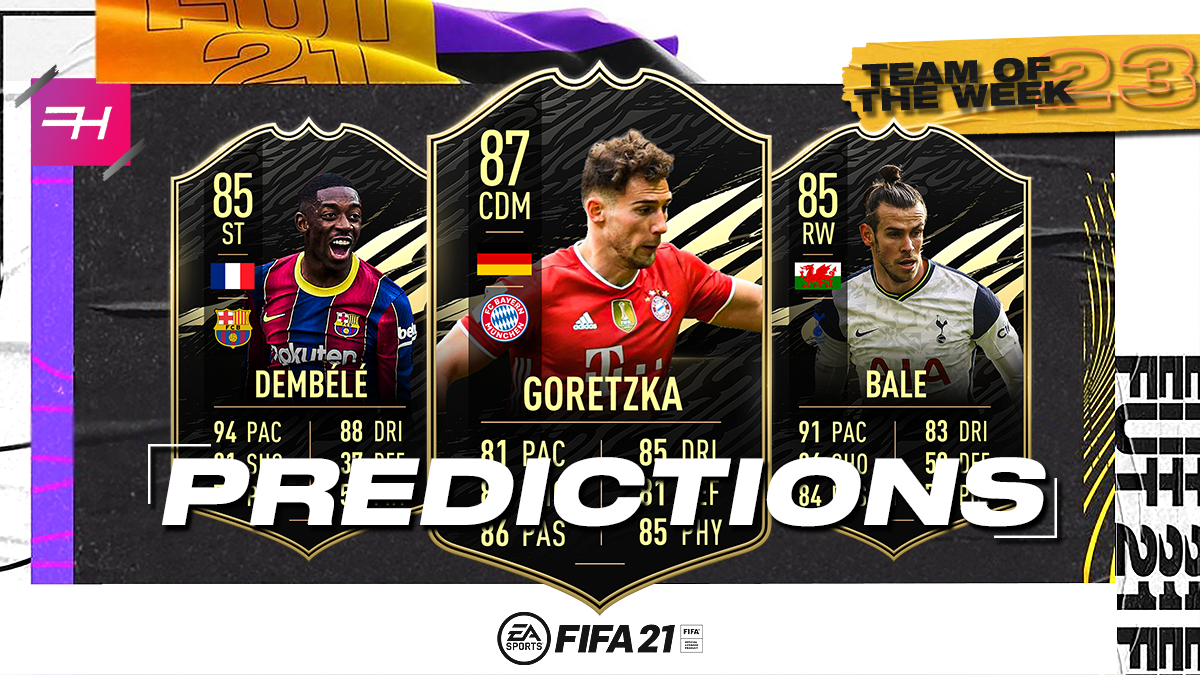 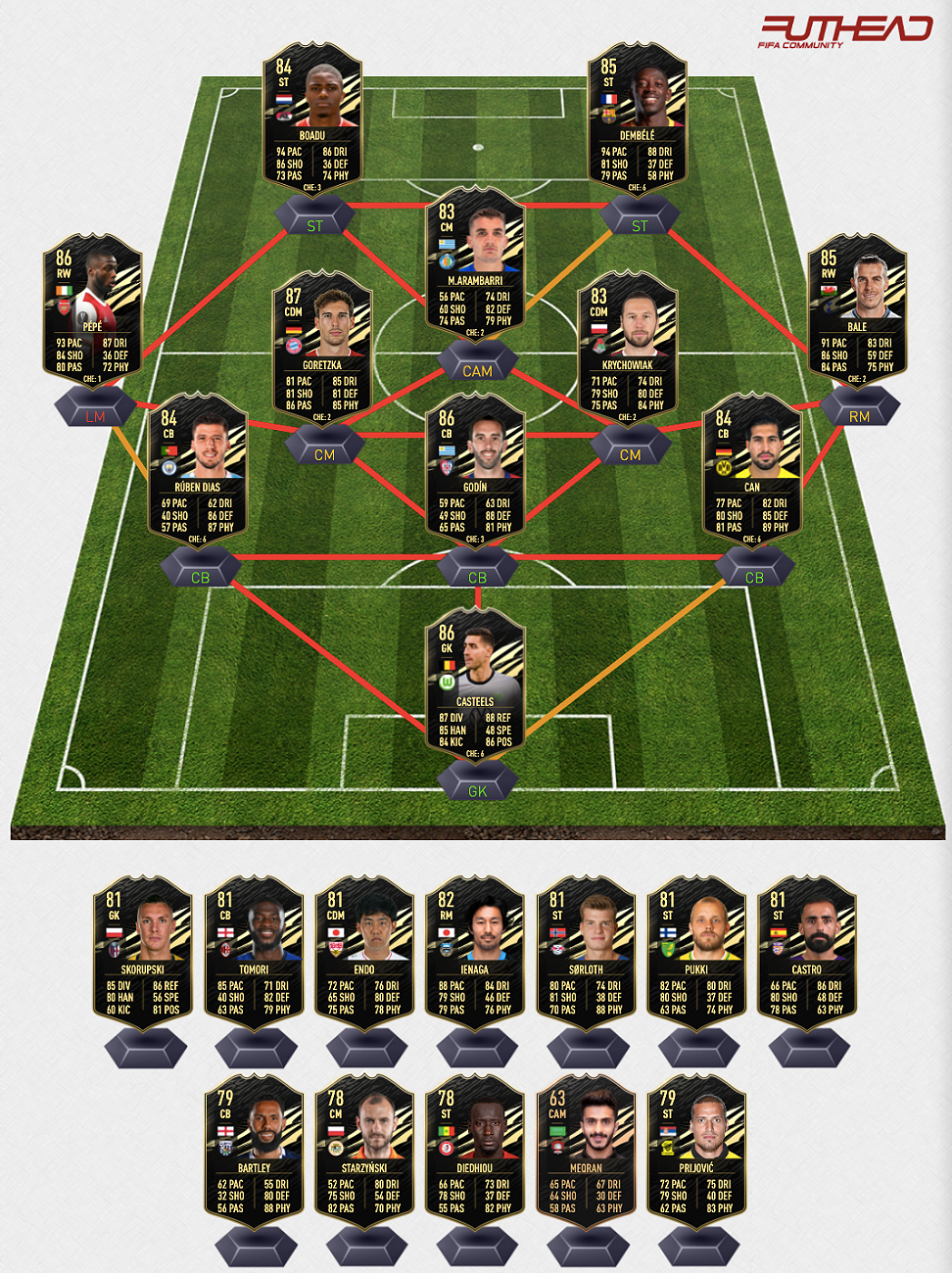 K. Casteels GK – VFL Wolfsburg - 85 -> 86 Rated: Wolfsburg extended their unbeaten run to 10 games in all competitions, and kept an eight clean sheet in a row, thanks to a battling performance in a 2-0 victory over Hertha Berlin. Koen Casteels once again showed that he is one of the top goalkeepers in the league with some sublime saves to deny Berlin from scoring. Although he isn't in Kicker's TOTW with a 1.5 match rating I'm going to include him due to the less options for higher rated goalkeepers this week.

D. Godin CB – Cagliari Calcio - 85 -> 86 Rated: Leonardo Semplici's first game in charge of Cagliari saw them defeat Crotone 2-0 in Serie A, marking their first win in 17 games to give their survival hopes a huge boost. Diego Godin showed a top performance, not only for his runs from deep but most important was his goalline clearance which could have turned the game around, his performance earned him a 7.5 match rating and MOTM.

Emre Can CB – Borussia Dortmund - 82 -> 84 Rated: Jadon Sancho once again was the star of the show as Borussia Dortmund eased to an impressive 3-0 win over Bielfeld on Saturday but with him actually being in packs in the What If Promo I'm going with Emre Can who had an outstanding game at the heart of the Dortmund backline. He made mutliple tackles when Arminian did venture forward, one of which was crucial in neutralising a goalscoring opportunity.

R. Dias CB – Manchester City - 81 -> 84 Rated: Manchester City weren't at their best but did enough to see out a win against an in-form West Ham United to make it 20 wins in a row. It was another exceptional performance display from the Portuguese centre-back and he once again showed why he should be the frontrunner for YPOTY with a his defensive excellence, and also added a goal that he has been itching or since joining. He deservedly picked uo the MOTM award and should finally receive his long ovedue inform.

L. Goretzka CM – Bayern Munich - 86 -> 87 Rated: Bayern Munich arrested a mini-slump in the Bundesliga by clinching a comfortable 5-1 victory against FC Köln on Saturday. Simply outstanding was Goretzka. He stole the show against Köln with the German midfielder having a hand in three of Bayern Munich's goals in this game and was a rock when tasked with defending.

Krychowiak CDM – Lokomotiv Moscow - 80 -> 83 Rated: The biggest game in Russian club football between Lokomotiv Moscow and CSKA Moscow took place on the weekend and Lokomotiv shocked CSKA as they got the win with a 2-0 at home. One of the two goals came from Krychowiak and if you haven't seen it I recommend to take a lot, it was a banger.

Arambarri CM – FC Getafe - 80 -> 83 Rated: FC Getafe finally ended their winless run of six games in La Liga with a convincing home win against FC Valencia. There isn't a real standout performance from this game but Arambarri got himself a goal from CM and picked up the highest possible match rating from Marca.

N. Pépé RW – Arsenal London - 84 -> 86 Rated: Arsenal London probably produced one of their best performances of the season as they came from behind to beat Leicester City 3-1 on Sunday. It was arguably Pepe's best performance in an Arsenal shirt to date. Ran Luke Thomas ragged so much that the left-back was subbed at half-time and scored a deserved goal too.

G. Bale RW – Tottenham Hotspur - 83 -> 85 Rated: Tottenham Hotspur broke their Premier League skid in dominant fashion as they brushed aside Burnley 4-0 at home. After his goal midweek in the Euro League Bale continued his recent resurgence in Tottenham colours, scoring twice and setting up Kane for his goal with a precise pass. A huge 9/10 match rating and MOTM for him and the only reason he could miss out of an inform.

O. Dembélé ST – FC Barcelona - 83 -> 85 Rated: FC Barcelona ended Sevilla's run of six consecutive La Liga wins with a 2-0 victory at the Ramon Sanchez-Pizjuan stadium, shooting them up to second in the table. Dembele opened the scoring for his side in the first half with a composed finish and posed a threat throughout his time on the pitch. Excellent game from the Frenchman and he picked up a perfect 3/3 match rating from Marca. It's also possible Messi will pick up the inform for his performance midweek against Elche and Sevilla on the weekend but with Sevilla being the way harder opponent to beat it feels like Dembele could make it and we've seen Messi being overlooked a few weeks ago for two goals too.

M. Boadu ST – AZ Alkmaar - 81 -> 84 Rated: With PSV drawing at home to Ajax, AZ Alkmaar had the chance to close the gap on second place with a victory and they did, defeating Feyenoord at home 4-2. Myron Boadu scored three of the four goals for his side and deservedly picked up an 8.5 match rating and MOTM, this potential second Inform is really looking good.

L. Skorupski GK - Bologna - 76 -> 81 Rated: Lazio Roma lost for the first time in Serie A this calendar yar as Bologna won 2-0 on Saturday evening and dented the Biancocelesti's Champions League qualification hopes. The Polish goalkeeper Skorupski probably had his best game of the season yet with a total of 8 saves, including a saved penalty and picked up an 8 match rating from Gazzetta.

F. Tomori CB – AC Milan -76 -> 81 Rated: AC Milan defeated Roma 2-1 at the Stadio Olimpico in an exciting end-to-end encounter on Sunday night in Serie A and kept the gap to leaders Inter Milan at four points. Despite Milan conceded a goal the Chelsea loanee was fantastic this evening, making several key interceptions and a great block in the first half to deny Pellegrini from close range.

W. Endo CDM – VfB Stuttgart - 75 -> 81 Rated: The air for Schalke 04 in the relegation battle is getting thiner and thiner after VfB Stuttagrt cruised past them with a 5-1 victory at the Mercedes-Benz Arena on Saturday. The Japan midfielder Endo was the oustanding player on the pitch, scoring his first two goals in the Bundesliga and also adding two assists to his game. Kicker awarded him with a perfect 1 match rating and Player of the Week, fully deserved.

A. Ienaga RM – Kawasaki Frontale - 79 -> 82 Rated: A few leagues have started their season and so did the J-League where we now could get a SIF from. Kawasaki Frontale secured all three points in their first game of the new season away at Kashiwa Reysol with a narrow 3-2 and two of the goals came from Ienaga. As already mentioned, this would be his SIF.

D. Castro ST – Perth Glory - 76 -> 81 Rated: Perth Glory took all three points in their clash against Brisbane Roar with a 2-0 and Diego Castro scored both goals for his side. With less gold options available this week for the striker spot's he definetly stands a chance.

T. Pukki ST – Norwich City - 76 -> 81 Rated: Norwich beat Birmingham City midweek to go 10 points clear at the top of the Championship and Teemu Pukki clearly is Norwich's In-form player at the moment and despite missing a penalty he still managed to score a brace for his side.

A. Sorloth ST – RB Leipzig - 77 -> 81 Rated: RB Leipzig fought back from 2-0 down to beat Borussia Mönchengladbach and keep the pressure on Bundesliga leaders Bayern Munich thanks to the Norwegian forward Alexander Sorloth who got subbed in and scored the winning goal in injury-time when it looked like the game would end in a draw.

K. Bartley CB – West Bromwich - 72 -> 79 Rated: West Brom secured a 1-0 victory over Brighton Hove to give their Premier League survival chances a boost in a game which could have gone completely the other way. The only goal came from centre-back Bartley early in the game but probably way more important was his sensational, match-winning block to prevent Moder from getting a shot on goal.

Starzynski CM – Zaglebie Lubin - 70 -> 78 Rated: It's another week with nearly no hat-tricks from player for the reserves so I'm happy to include Starzynski. His side recorded the first win after a run of 6 winless games with a 4-2 win away at Cracovia and he got himself two goals and an assist.

Al Meqran CAM – Al Raed - 53 -> 63 Rated: A very rare seen bronze inform could come out on wednesday after Al Raed defeated Al Ain 4-0. Al Meqran was most influencial for his side with scoring three of the four goals, it will be interesting to see if he will make it or not due to being bronze.

F. Diedhiou ST – Bristol City - 71 -> 78 Rated: New Bristol City manager Nigel Pearson watched his new side end a run of six straight Championship defeat with an impressive win at Middlesbrough. The one to shine was Famara Diedhiou who scored a brace and added an assist to his game.

A. Prijovic ST – Al-Ittihad - 72 -> 79 Rated: The only player this week with a hat-trick who also has a card in FUT is coming from the Saudi League. Al Ittihad managed to stay third in the league after their 4-1 win away at Qadasiya and Prijovic got himself three of the four goals.