FIFA 21 Team of the Week 22 Predictions

Published on by Simpleblue 43 Comments Updated on 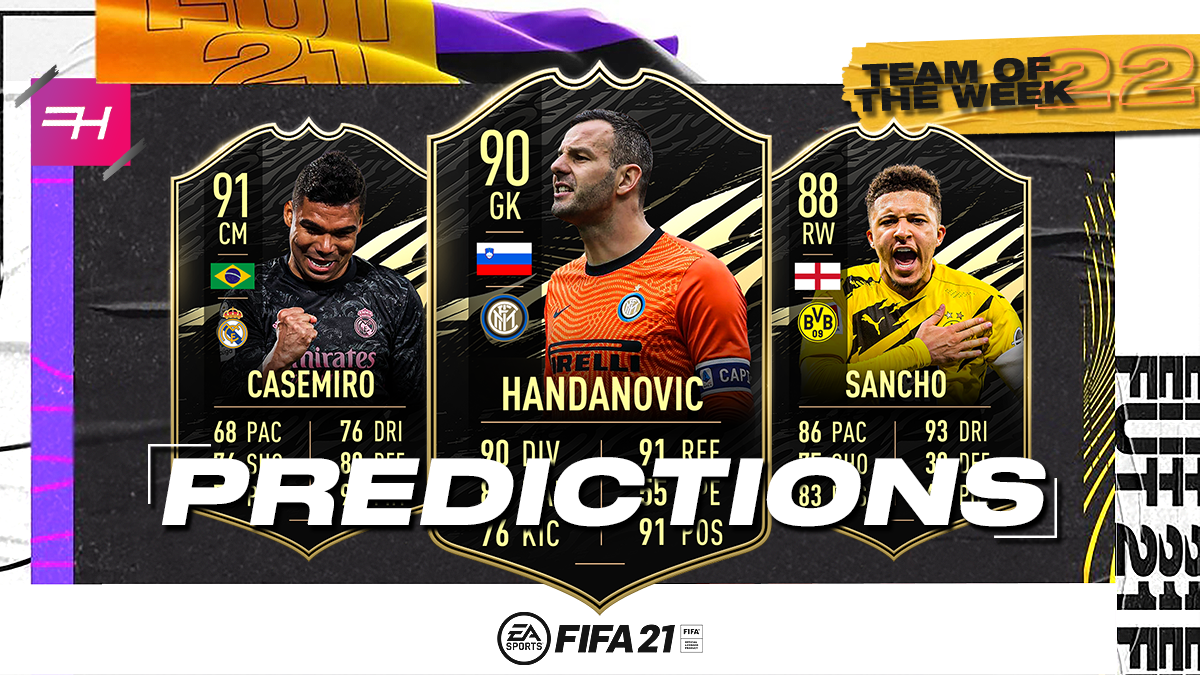 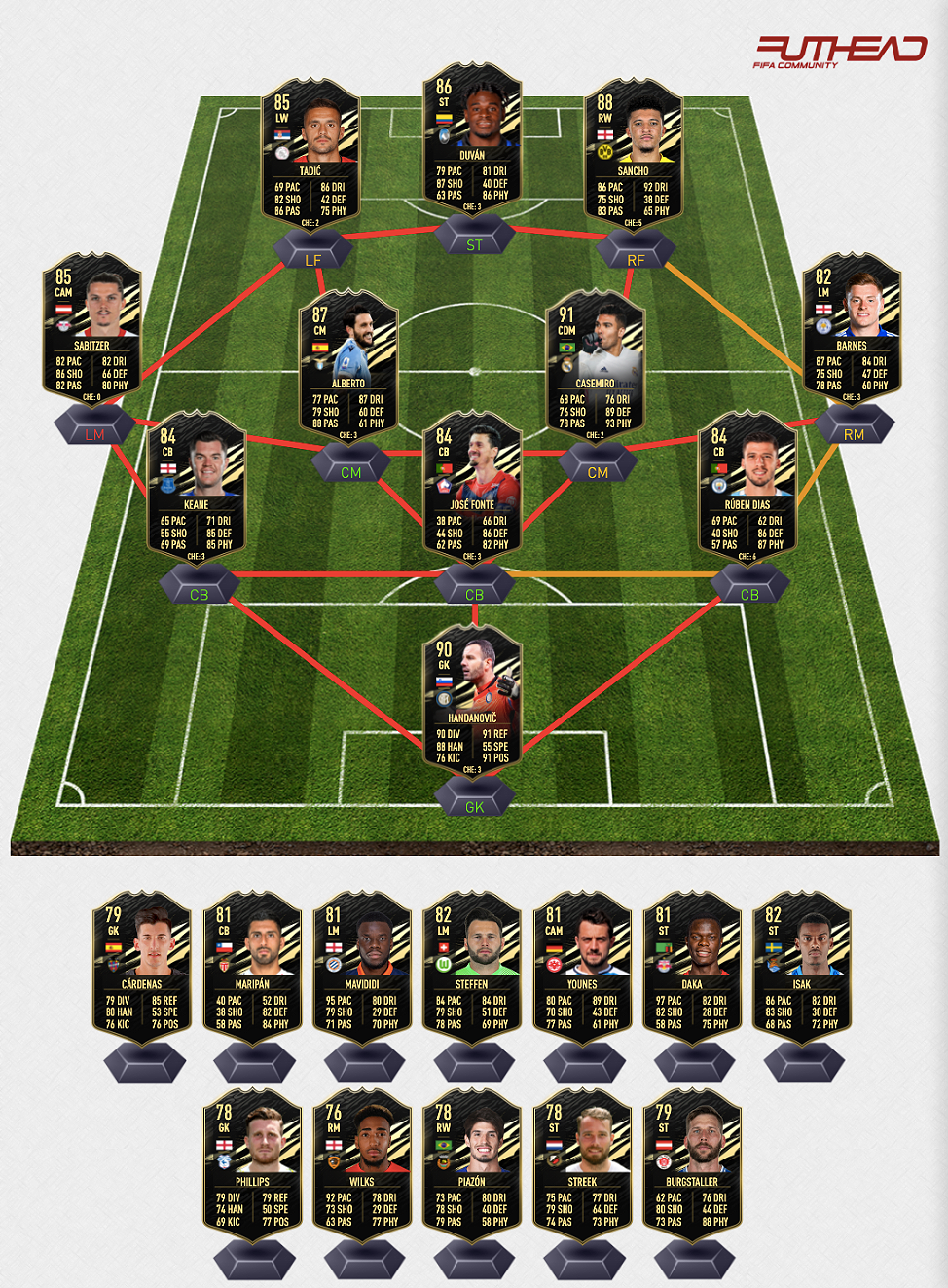 S. Handanovic GK – Inter Milan - 89 -> 89 Rated: Inter Milan exacted revenge on AC Milan, taking the second Derby della Madonnina of the Serie A season in convincing fashion to extend their lead atop the Serie A thanks to a 3-0 win. Lautaro Martinez once again was the star alongside Lukaku but with both just recently being included in TOTW Handanovic seems to bet set for an inform after his outstanding performance. He made a total of 8 saves and denied AC Milan from scoring in a game which could have been extremely closer without him.

M. Keane CB – FC Everton - 82 -> 84 Rated: FC Everton ended their 24-game winless run at Anfield with a deserved 2-0 win over Liverpool as Klopp's men slipped to a fourth straight home defeat. Despite not having scored, Michael Keane put in a brilliant performane, but his tackle early in the second half with Sadio Mane bearing down on goal was fantastic.

J. Fonte CB – LOSC Lille - 82 -> 84 Rated: LOSC Lille pulled back to the top of Ligue 1 with a 4-1 victory over Lorient after Paris SG slipped up against AS Monaco. One of the goals came from José Fonte who not just scored but also played a huge part defensively with a last man tackle to deny Lorient from scoring a second goal.

R. Dias CB – Manchester City - 81 -> 84 Rated: Manchester City edged out Arsenal at the Emirates Stadium to extend their lead to ten points at the top of the Premier League and recorded yet another clean sheet. The only goal came from Sterling early on in the game but Dias continued to impress in the back four. He won most of his battles against Aubameyang, kept things neat and tidy at the back and picked up MOTM.

Casemiro CM – Real Madrid - 90 -> 91 Rated: Real Madrid managed to grind out a narrow yet crucial 1-0 win over Real Valladolid on saturday night to leave themselves just three points off leaders Atletico. Casemiro was the most important threat on goal for his side, winning fice duels, three tackles and three interceptions. While he was astute in his defensive duties he managed to find the net with one of his three header to give his side the win.

L. Alberto CM – Lazio Roma - 86 -> 87 Rated: Lazio Roma welcomned Sampdoria at the Stadio Olimpico as Inzaghi's side were looking to bounce back after a 1-4 defeat to Inter last week. Although it wasn't the prettiest of wins, Lazio did come away 1-0 winners and the only goal came from a brilliant Luis Alberto strike which was his seventh goal of the campaign. Gazzetta awarded him with a 7.5 and Alberto seems to be the kind of player who only needs a goal to get an inform.

M. Sabitzer CAM – RB Leipzig - 83 -> 85 Rated: RB Leipzig went back on winning ways in the Bundesliga after last week's defeat with a 3-0 victory over Hertha Berlin and closed the gap to leader Bayern Munich to two points. Marcel Sabitzer had a brilliant game once again with scoring an absolute 25-yard stunner and assisting another.

H. Barnes LM – Leicester City - 79 -> 82 Rated: Leicester City strengthened their top-four bid as they held out to beat Aston Villa 2-1 away. Harvey Barnes looked dangerous all afternoon with Gareth Southgate in attendance and got himself a goal and assist.

D. Tadic LW – Ajax Amsterdam - 83 -> 85 Rated: This is a debatable pick from Ajax' 4-2 victory over Sparta Rotterdam because Haller scored two goals but I've opted for Tadic instead who contributed three assists and was the man behind his side's win. Vl awarded both with an 8 match rating.

J. Sancho RW – Borussia Dortmund - 87 -> 88 Rated: Dortmund continued their recent form and piled on more misery for arch-rivals FC Schalke with a comfortable 4-0 victory in the Revierderby which seemed to be the last one for a while. Jadon Sancho was one of the best performers on the pitch, often looking like a menace for the Schalke defence. His trickery and cimbination play on the flanks saw him not only assist Haaland for the second goal but also score the opener with a decent finish.

D. Zapata ST - Atalanta - 85 -> 86 Rated: Atalanta recorded a second straight win in Serie A with a 4-2 victory over Napoli on Sunday evening in a game that saw all six goals scored in the second half. Muriel was named MOTM in that game but he currently is featured in TOTW so I've decided to include Zapata who got himself a goal and an assist, he also picked up a 7.5 match rating.

Cardenas GK - Levante - 73 -> 79 Rated: La Liga leaders Atletico Madrid's recent wobble in form continued as they fell to their first defeat in 12 league games when they were beaten 2-0 at home to Levante. Atletico had a total of 28 shots on goal but were unable to score and this was because of Levante's goalkeeper Cardenas who made a total of 10 saves and picked up a perfect 3/3 match rating from Marca.

Maripan CB – AS Monaco -75 -> 81 Rated: AS Monaco ousted a star studded Paris Saint-Germain 2-0 courtesy of a magnificent collective effort away from home. One of the two goals came from Maripan who scored his fifth goal of the season and was the key in organising and helping his teammates. L'Equipe awarded him with an 8/10 match rating.

R. Steffen LM – VFL Wolfsburg - 78 -> 82 Rated: Wolfsburg kept a club record sixth clean sheet in succession with a 3-0 win over Bielefeld on Friday night. Two of the goals came from Renato Steffen from the LM position and Wolfsburg is now unbeaten in eigth leagues matches.

A. Younes LW - Frankfurt - 81 -> 84 Rated: Yet another goal from Lewandowski wasn't enough to prevent Bayern Munich slipping to a surprise 2-1 defeat to high-flying Eintracht Frankfurt. Although Younes just scored one goal, which was a brilliant strike, he was the most dangerous player for his side, causing problems all the time for Bayern defensive line. Kicker deservedly awarded him with a perferct 1 match rating and MOTM.

A. Isak ST – Real Sociedad - 79 -> 82 Rated: Real Sociedad boosted their chances of a Top Four finish in La Liga this season thanks to an impressive 4-0 win at home to Alaves. Alexander Isak, who just recently got his Future Star item set his side on course for all three points with a hat-trick.

P. Daka ST – RB Salzburg - 76 -> 81 Rated: The top of the table clash between Salzburg and Rapid Vienna ended in a 4-2 home win for Salzburg and Patson Daka scored three of the four goals for his side.

D. Phillips GK – Cardiff City - 71 -> 78 Rated: With four goals, four scorers and two penalty saves, the Bluebirds made it five consecutive wins in a dramatic contest with Preston North End. That being said, it was on goalkeeper Dillon Phillips to shine. He made a total of 5 saves but most important, two tremendous penaltys saves in the second half and then denied Barkhuizen from point-blank range late on.

M. Wilks RM – Hull City - 67 -> 76 Rated: Seven months on from last season's humiliation, Hull City returned to Wigan Athletic to record a sensational 5-0 victory at the DW Stadium. Mallik Wilks put in a sensational performance for his side, was unplayable all night and his terrific hat-trick was the highlight of a great night for Hull.

v.d. Streek ST – FC Utrecht - 70 -> 78 Rated: Willem II's relegation issues worsened on Friday night after a 6-0 loss at home to FC Utrecht who have been in great form in recent weeks. Van de Streek got himself two goals and one assist in this game and picked up an 8 match rating from Vl which could see him pick up an inform.

L. Piazon RW – Sporting Braga - 71 -> 78 Rated: Compared to last weeks TOTW's there haven't many hat-tricks this week and therefore I'm happy about Piazon's performance. Braga won their home fixture against Tondela 4-2 and Piazon was involved in all four goals with scoring two and assisting another two.

Burgstaller ST – St. Pauli - 72 -> 79 Rated: As I said earlier, hat-tricks have been very rare this weeks when it comes to the reserves so a lot of players with 2 goals can make it and one of them is Guido Burgstaller who scored twice in St. Pauli's dramatic 3-2 home win against Darmstadt and picked up POTW.