FIFA 21 Team of the Week 21 Predictions

Published on by Simpleblue 34 Comments Updated on 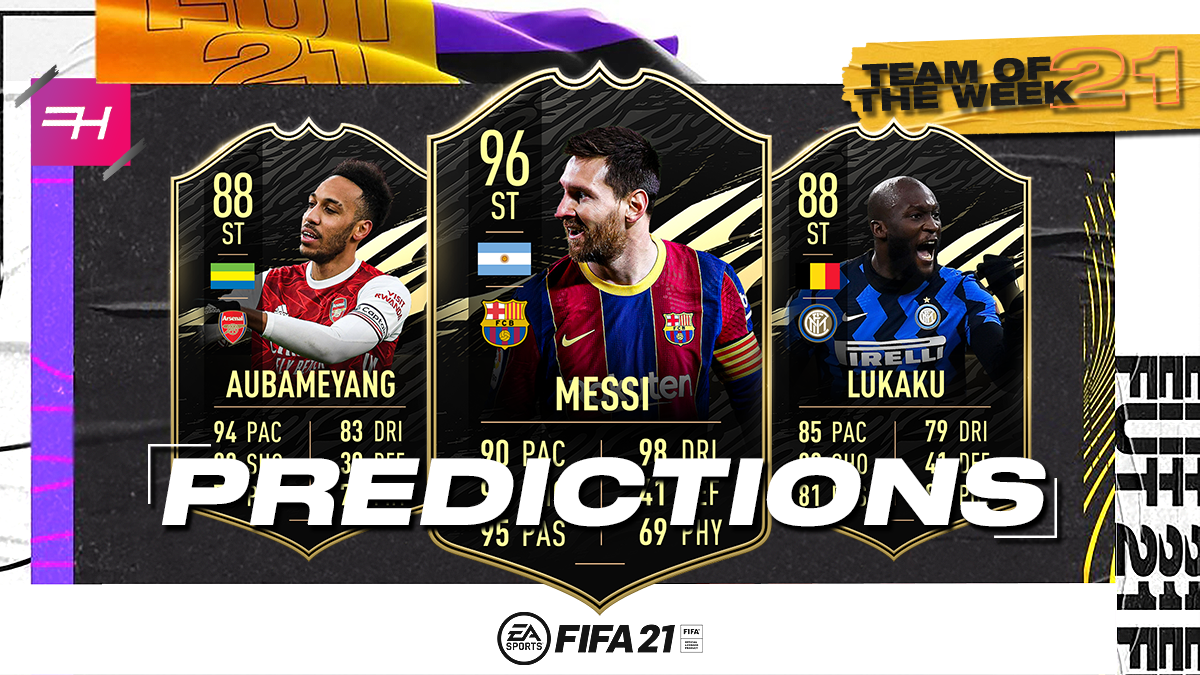 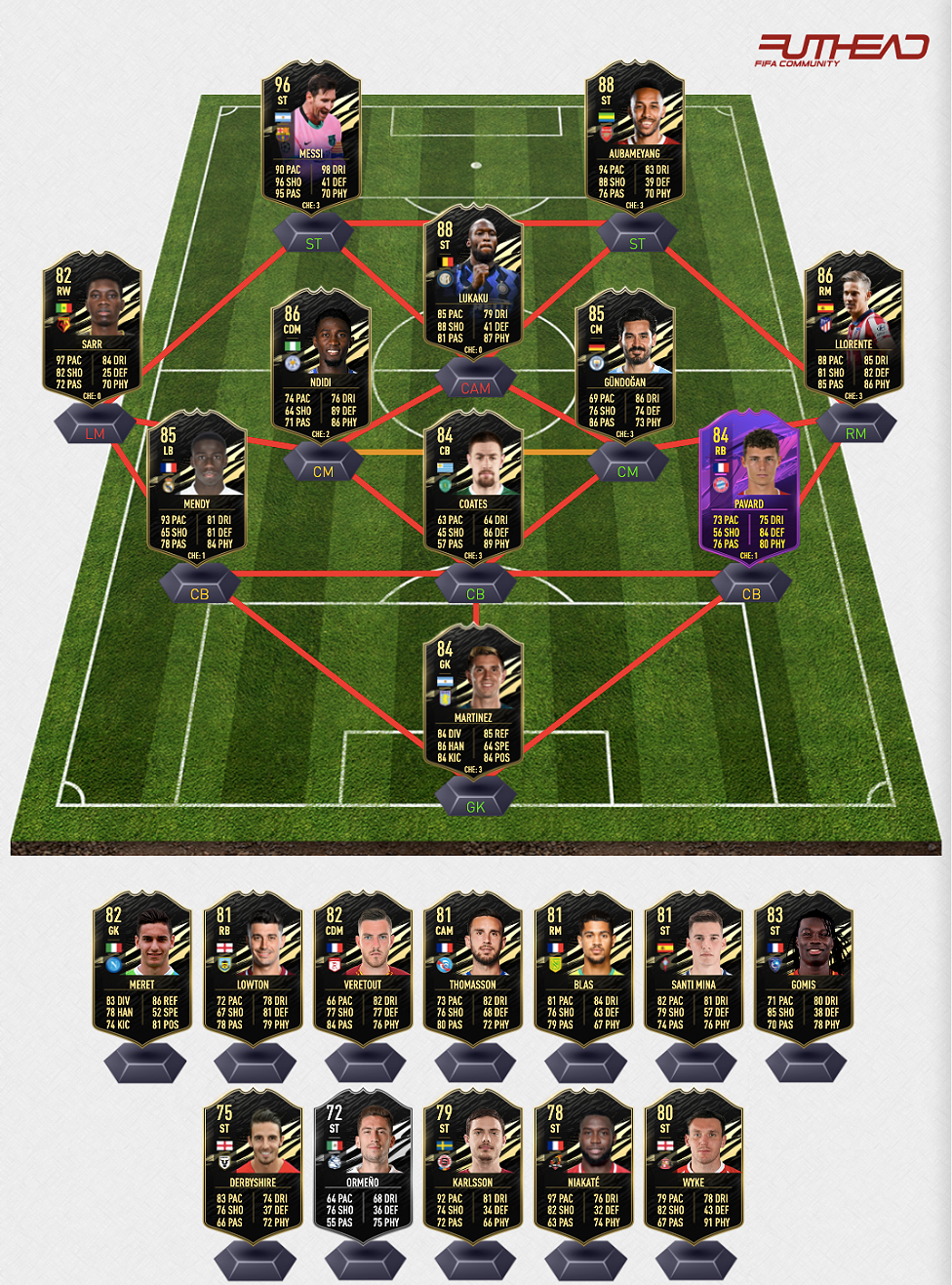 E. Martinez GK - Aston Villa - 82 -> 84 Rated: Aston Villa played out a goalless draw at Brighton to rack up their 12th clean sheet from 22 games to climb up to eighth. Martinez yet again came to Villa's rescue with a total amount of 9 saves to deny Brighton from scoring and was rewarded with a huge 9/10 and MOTM.

F. Mendy CB - Real Madrid - 83 -> 85 Rated: Real Madrid put on an entertaining display as they defeated Getafe 2-0 at home playing in a new formation. Mendy started in an unorthodox position as the left-sided defender in a back three but he was rock solid. He combined brillianly with Marcelo and scored the second goal to secure the win for his side. A perfect 3/3 match rating from Marca could see him picking up his first inform, surely a card in huge demand.

S. Coates CB - Sporting CP - 81 -> 84 Rated: Relegation battling side Gil Vicente faced Sporting at home and it looked like they would pick up three important points against Sporting but two late goals from Sebastian Coates turned it around and Sporting took all three points who remain still unbeaten on top of the Liga NOS table.

B. Pavard RB - FC Bayern - 81 -> 84 Rated: Bayern Munich continued to make club history, this time capping off their 202 competitions with a sixth club trophy after defeating Tigres 1-0 in the Fifa Club World Cup final. The only goal in this game came from the French international Pavard and like last year with Firmino this should result in a Hero card even though Kicker just rewarded him with a 3 which usually wouldn't be enough.

M. Llorente RM - A. Madrid - 84 -> 86 Rated: Atletico Madrid showed on Saturday that the they can do it even when they're unable to name a full bench, securing what could be a vital three points with a 2-1 win at Granada. Marcos Llorente once again proved his worth for his side with scoring the opening goal and assisting the match winning goal for Correa 15 minutes before the final whistle.

Gündogan CM - Manchester City - 83 -> 85 Rated: Manchester City condemned Tottenham to a miserable 3-0 defeat to cement their top spot in the Premier League. It was another match-winning display from the German international who just won the Premier League POTM Award, scoring another two goals to make it nine in his last nine games. That being said, there's definetly a high risk he'll miss out on an inform due to his POTM award.

I. Sarr RW - Watford - 78 -> 82 Rated: A reinvigorated Watford side put Bristol City to the sword, beating them 6-0 at Vicarage Road. Watford's winger Sarr put in a superb man of the match display with scoring two and assisting another two goals and could have scored a hat-trick but nevertheless this performance should definetly be worth an inform.

R. Lukaku ST - Inter Milan - 87 -> 88 Rated: Inter ended Lazio's run of six consecutive league victories with a 3-1 win on Sunday night, sending Antonio Conte's side on top of Serie A. Lukaku was barely in the game so intent on defending throughout the first half, but still managed to slot away a brace of well-taken strikes with one of them being a penalty. Popped up with an assist to add Inter's third later on and picked up an 8 and POTW from Gazzetta for his performance.

Aubameyang ST - FC Arsenal - 87 -> 88 Rated: Arsenal London survived a late Leeds scare and secured three points with an entertaining 4-2 home win at the Emirates on Sunday. Aubameyang started the game ahead of Pepe and Lacazette but the Gabon striker more than just justified it with scoring his first Premier League hat-trick, deservedly picked up MOTM.

L. Messi ST - FC Barcelona - 95 -> 96 Rated: Barcelona recorded another win in La Liga on Saturday, bouncing back from the midweek loss in the Copa del Rey to Sevilla to beat Deportivo Alaves 5-1. Messi once again was the difference maker, scoring two goals while also grabbing an assist. The Argentinian just warmed up for PSG with a quite outstanding performance.

A. Meret GK - Napoli - 78 -> 82 Rated: Despite missing a plethora of first-team players, Napoli managed to take all three points against Juventus with a 1-0 win at home. The only goal of the game came from Insigne but the Napoli shot-stopper Meret put in a world-class performance, producing several astonishing saves to keep his side in the game and frustrated Juventus. A huge performance from him and deservedly awarded with a 7.5 match rating and MOTM.

M. Lowton RB - Burnley -75 -> 81 Rated: Burnley brushed aside a limp Crystal Palace side to move further clear of the Premier League's bottom three. Matt Lowton had a fantastic performance but the goal he scored was outstanding. This and his defensive performance should be enough to make it into TOTW.

J. Veretout CDM - Roma FC - 78 -> 82 Rated: AS Roma moved back above Juventus into third in the Serie A standings after a 3-0 victory over Udinese Calcio. Two of the three goals came from Jordan Veretout from the CDM position who bagged his brace in the first half and set the way for his side for three points.

Thomasson CAM - RC Strasbourg - 77 -> 81 Rated: Ligue 1 isn't offering a lot of options this week but one who should definetly be in is Strasbourgs forward Thomasson who scored both goals in Strasbourgs 2-1 victory over FC Metz. L'Equipe awarded him with an 8.

L. Blas RM - FC Nantes - 76 -> 81 Rated: Nantes finally returned to winning ways after a winless run of sixteen games in all competitions with a 3-1 win against SCO Angers and secured three very important points in their relegation battle. French forward Blas, who is Nantes' top scorer in Ligue 1 assisted two of the three goals and picked up an 8 from L'Equipe, the joint highest rating this week.

Santi Mina ST - Celta Vigo - 76 -> 81 Rated: An inspired Celta Vigo put in an convincing performance on Friday as they defeated relegation-battling side FC Elche 3-1 at home. Two of the goals came from the Spanish forward Santi Mina which saw him picking up a perfect 3/3 match ratings from Marca.

B. Gomis ST - Al Hilal - 80 -> 83 Rated: Bottom of the league side Al-Ain faced Al Hilal midweek at home and Al Hilal was looking to get back to winnings ways after a narrow defeat to Abha Club and they did in style. The game ended in a convincing 5-0 and four of the goals came from the French forward Gomis. That being said, three of his goals were scored from the penalty spot but it still should be enough for him to pick up an inform.

Derbyshire ST - Macarthur FC - 65 -> 75 Rated: EA really seem to not care a lot about the Australian A-League but this time I'm expecting an inform. That being said, Macarthur FC defeated Adelaide United at home with 4-0 and the English striker Derbyshire managed to score a hat-trick and getting an assist.

S. Ormeno ST - Puebla - 62 -> 72 Rated: After a narrow and disappointing defeat to CF America Puebla managed to bounce back and recorded a 4-0 home win against Juarez FC where three of the goals came from Santiago Ormeno to help his side secure three points.

Karlsson ST - Sparta Praha - 73 -> 79 Rated: There have been quite a lot of hat-tricks from smaller leagues this week so I expect at least one of them to miss out but one who shouldn't be overlooked is Sparta Praha's Karlsson. Sparta won their home match against MFK Karvina 4-3 with a man down fo the last 20 minutes and the Swedish forward Karlsson scored three of the four goals.

Niakate ST - Al Wehda - 71 -> 78 Rated: This might be the second inform we could see from the Saudi League. Al-Wehda ended their winless run of six games in a row with a 4-2 away win to Al-Faisaly and the Frenchman Niakate recorded a hat-trick for his side.

C. Wyke ST - Sunderland - 74 -> 80 Rated: Sunderland returned to winning ways in convincing style as they blasted to a 4-1 win over promotion rivals Doncaster Rovers. Charlie Wyke was the star of the show, scoring all four goals and is the first Sunderland striker to score 20 goals in a season since Darren Bent.