FIFA 21 Team of the Week 20 Predictions

Published on by Simpleblue 48 Comments Updated on 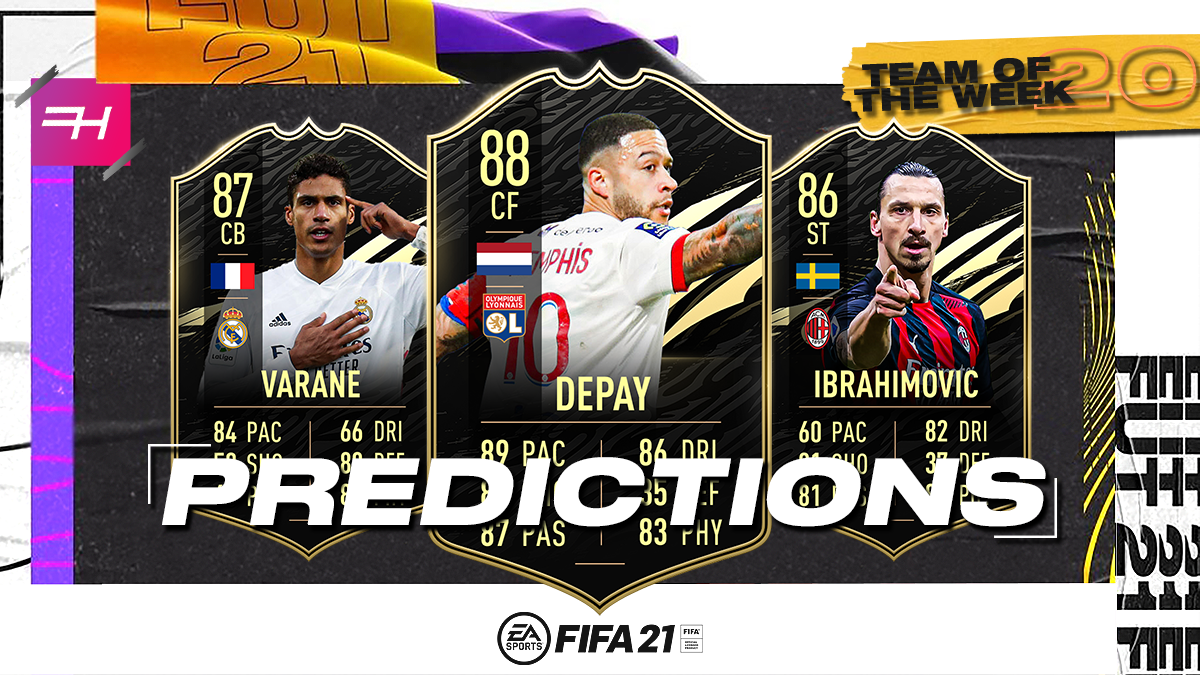 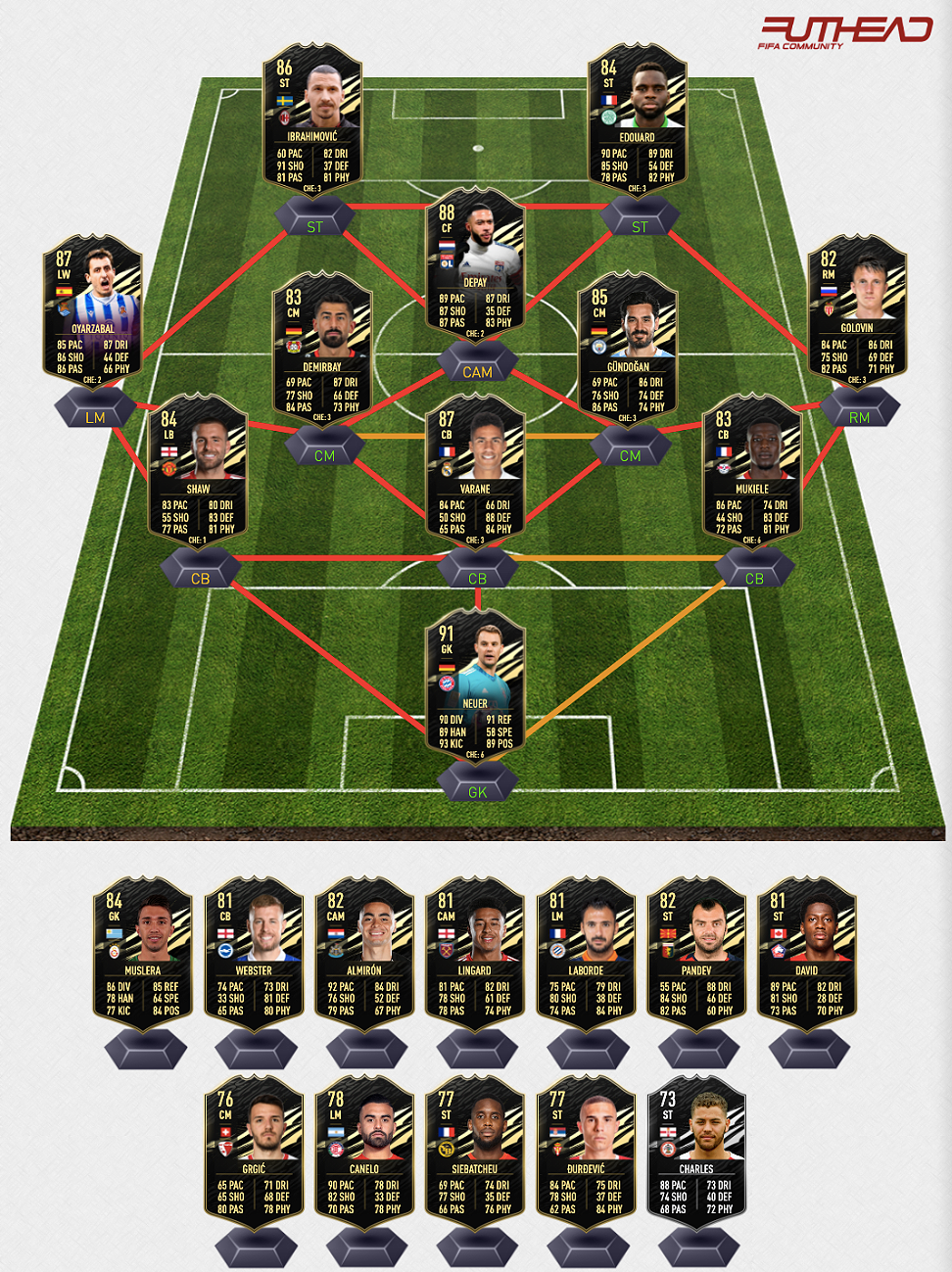 M. Neuer GK - FC Bayern - 90 -> 91 Rated: FC Bayern beat Hertha Berlin 1-0 on Friday evening, extending their lead in the Bundesliga table to seven points. The Bayern Munich captain was very busy all game, especially in the first half where he had to make five saves to deny Hertha Berlin from taking the lead. A MOTM performance from him as he ensured his side grabbed all three points.

Luke Shaw LB - Manchester United - 81 -> 84 Rated: Manchester United secured a record-equalling 9-0 win over Southampton on Wednesday night and there's a strong chance we will see two Informs from this game. Luke Shaw was in sensational form against his former club, notching a couple of assists with two excellent crosses into the box. Man of the Match performance and a deserved 9/10 match rating from Sky.

R. Varane CB - Real Madrid - 86 -> 87 Rated: Real Madrid secured a comeback win against bottom-placed side SD Huesca, securing three important points to stay in the top three of the La Liga table. The Frenchman was the most important player in the Real Madrid defense following an injury to Sergio Ramos. He managed to perform his defensive duties with ease with six cleareances but his most valuable contributions came at the other end when he scored the equaliser and the winning goal late in the game.

N. Mukiele CB - RB Leipzig - 80 -> 83 Rated: RB Leipzig faced bottom of the league side FC Schalke and they consolidated second place with a comfortable 3-0 victory. The Frenchman broke the deadlock and opened the scoring right before half-time with a free header from Nkunku's corner and was the fifth different defender who scored for Leipzig this season.

K. Demirbay CM - Bayer Leverkusen - 80 -> 83 Rated: Bayer Leverkusen earned their 10th win of the season with an entertaining 5-2 victory at home to VFB Stuttgart. Two of the goals came from Demirbay who scored his first Bundesliga brace for Leverkusen and deservedly picked up MOTM from Kicker.

A. Golovin RM - AS Monaco - 79 -> 82 Rated: A pretty much unexpected, entertaining game ended in a 4-3 away win for AS Monaco against bottom side Nimes. The Russian international has been superb since returning from injury and he scored a fabulous ha-trick and added an assist to his tripple salvo to ensure Kovac's side's winning run continued at the start of 2021. He picked up a rarely given 9/10 from L'Equipe and I would be shocked if he's going to miss out on his Inform.

Gündogan CM - Manchester City - 83 -> 85 Rated: Manchester City ended decades of hurt at Anfield by soundly beating Liverpool 4-1 on Merseyside and extended their lead to five points now with still a game in hand. Gündogan missed a penalty in the first half but bagged two goals in the second half to give city the lead. Probably Man City's most important player at the moment.

Oyarzabal LW - R. Sociedad - 86 -> 87 Rated: Real Sociedad cruised to a 4-1 victory over Cadiz at the Reale Arena on Sunday and recorded their first La Liga win in 2021. Isak scored a brace but with him recently being in Packs as a Future Star the next best option is Oyarzabal who scored, assisted another and picked up a perfect 3/3 match rating from Marca.

M. Depay CF - O. Lyon - 87 -> 88 Rated: Lyon stayed second in the Ligue 1 table after beating ten-man Strasbourg 3-0 on Saturday night. Depay was again the top performer on show for many reasons, one of them being his two goals including a superb free-kick. The Lyon captain took his season's tally to 13 top-flight goals and he has now scored more goals for Lyon than homegrown OL idol Benzema.

O. Edouard ST - Celtic - 81 -> 84 Rated: Celtic Glasgow delivered their biggest win since September with a convincing 4-0 home win against Kilmarnock. The French forward Edouard was at his brilliant best as he caused all sort of problems and scored a brace for his side.

Ibrahimovic ST - AC Milan - 85 -> 86 Rated: AC Milan stays in top spot in Serie A where they hold a two-point cushion over their cross-city rivals after a 4-0 win over Crotone at home. Ibrahimovic, who turns 40 his year, bagged another brace for Milan and recored his 500th and 501st club goal. Gazzetta awarded him with an 8/10 and MOTM.

Muslera GK - Galatasaray - 82 -> 84 Rated: The biggest game and derby took place in the Turkish Super league took place on Saturday and ended in a narrow 1-0 win for the away side. It's hard to pick a player from that game but with the limited amount of goalkeepers available this week I'm going with Muslera who made a total of five saves and kept a clean sheet.

A. Webster CB - Brighton & Hove -75 -> 81 Rated: Brighton Hove enjoyed one of their best results as Premier League club with a stunning and shocking victory against Liverpool at Anfield. A few players have been great but one who was outstanding was center-back Webster who made a total of three cleareances and picked up an 8/10 and MOTM.

Almiron CAM - Newcastle - 78 -> 82 Rated: Nine-men Newcastle held on for a thrilling 3-2 victory over Southampton in an incredible game at St James Park on Saturday. Star of the game was Miguel Almiron who scored a brace and helped his side securing three important points.

J. Lingard CAM – West Ham - 77 -> 81 Rated: Aston Villa's three-game unbeaten run at home came to an abrupt end when West Ham inflicted misery on them with a 3-1 win. Jesse Lingard made his debut for the Hammers and could it get better than this? He scored twice in the second half and was involved in everything that West Ham did.

G. Laborde LM - Montpellier - 76 -> 81 Rated: Montpellier came back from behind against a 10-men Dijon side to secure a 4-2 home win, their first win after a winless run of nine games in Ligue 1. Man of the Match was the french forward Laborde, scoring two and assisting another from the LM position and was crucial for his side picking up important three points.

G. Pandev ST - Genoa - 79 -> 82 Rated: A shock 2-1 victory came from Genoa against Napoli on Saturday. Both goals came from the 37-years-old former Napoli player Goran Pandev who took his tally to three goals this season and picked up a huge 8 and MOTM for his performance.

A. Grgic CM - FC Sion - 68 -> 76 Rated: Two Informs from the Swiss league are very likely this week, this could come from FC Sion who beat St. Gallen 3-2 midweek. All three goals came from Anto Grgic from the center-mid position.

A. Canelo LM - Toluca - 70 -> 78 Rated: League leaders Toluca stay joint top of the league after a 4-1 home win against Mazatlan. Three goals came from left-midfielder Canelo who is set to pick up an Inform for his performance.

Siebatcheu ST – YB Bern - 69 -> 77 Rated: This is a bit of a tricky one as Young Boys Bern won both of their fixtures and two different players bagged a hat-trick. The one I'm going with is Siebatcheu who scored three goals in Bern's 4-2 midweek win against FC Zürich.

Durdevic ST - Sporting Gijon - 69 -> 77 Rated: Sporting Gijon ended their three-game winless run in the league with a convincing 4-0 away win to Logrones. The Serbian forward Djurdjevic stole the show with scoring three of the four goals.

D. Charles ST - Accrington Stanley - 63 -> 73 Rated: Accrington Stanley beat Bristol Rovers 6-1 in a game which got off to a breath-taking start with five goals in the first 28 minutes. Three of the goals came from Dion Charles who scored his first hat-trick for his team in the league.