FIFA 21 Team of the Week 19 Predictions

Published on by Simpleblue 25 Comments Updated on 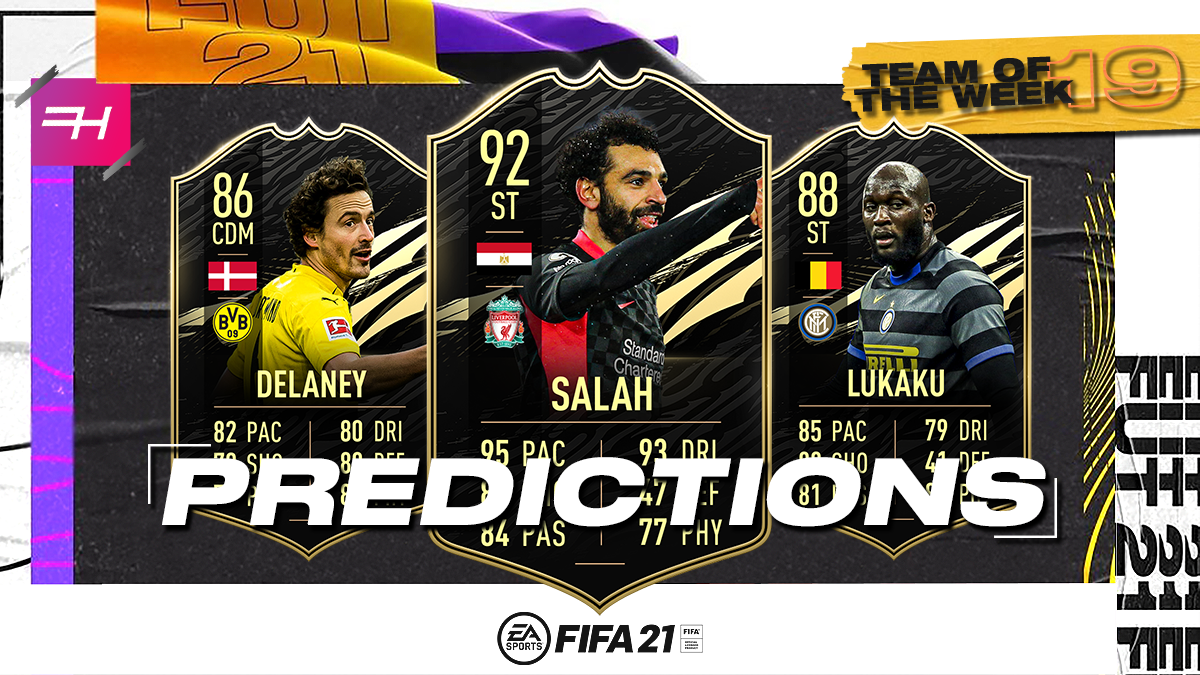 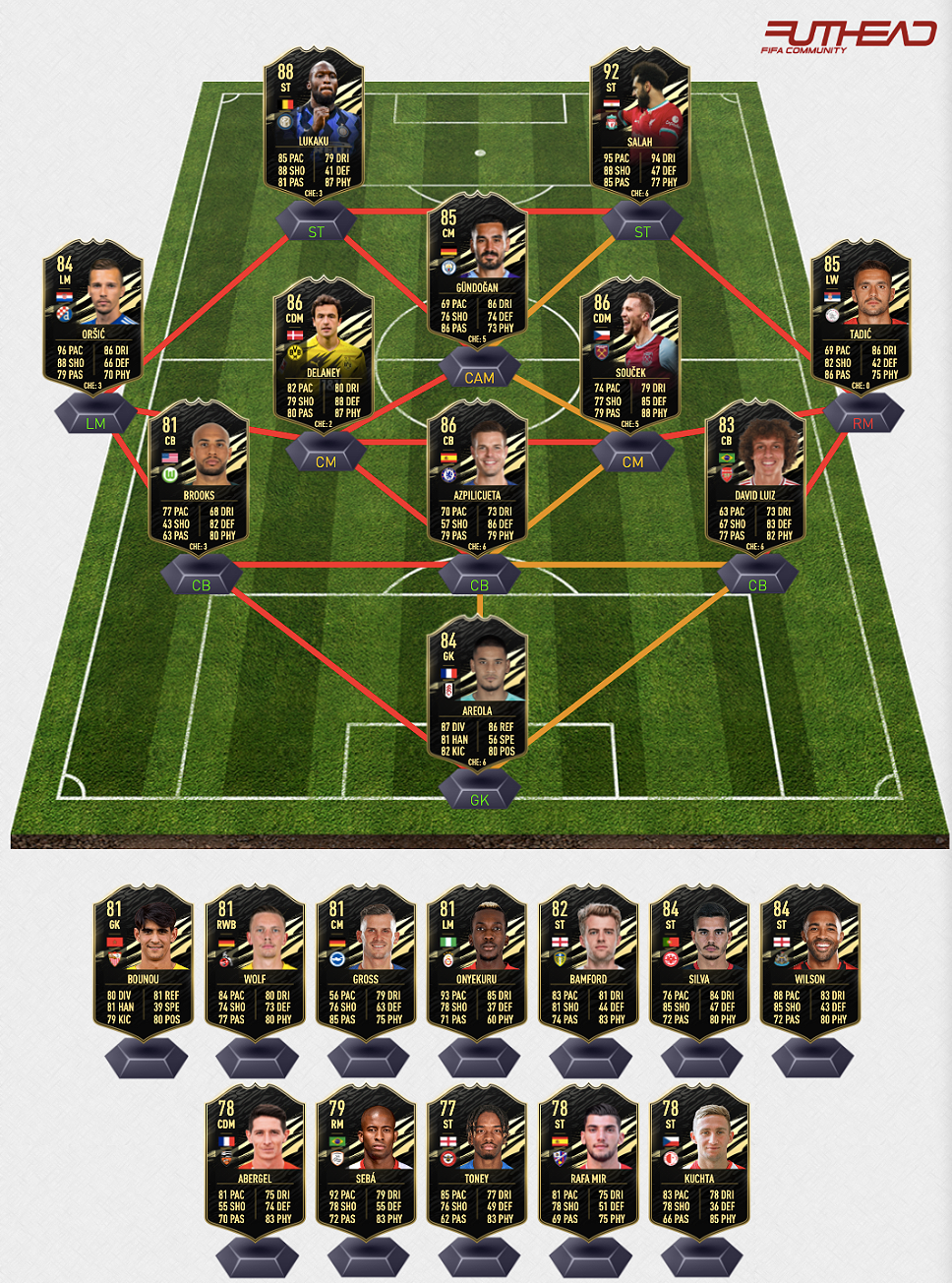 A. Areola GK - Fulham FC - 82 -> 84 Rated: The clash between relegation rivals Brighton Hove and Fulham ended in a goalless draw on Wednesday night. The Frenchman once again showed his worth for his side with making a total of 5 saves to deny Brighton from scoring with some fantastic shot-stopping to keep his side in a game they easily could have lost.

J. Brooks CB - VFL Wolfsburg - 76 -> 81 Rated: VFL Wolfsburg cruised to a 3-0 jome win over Freiburg on Sunday to move third place in the Bundesliga with their third straight win and still remain unbeaten at home. One of the goals came from the United States international Brooks who fired in the opener after a corner. Due to the lack of gold options for defenders this week, especially from Ligue 1, I expect Brooks to make it after he picked up a 2 match rating and MOTM from Kicker.

Azpilicueta CB - Chelsea FC - 84 -> 86 Rated: Thomas Tuchel has overseen his first win as Chelsea boss as the Blues comfortably defeated Burnley 2-0 on Sunday at the Stamford Bridge. The Spaniard put in a captain's performance, he didn't have to exert himself a great deal defensively which allowed him to push forward and powering home a thunderous strike to score the first goal. Although Hudson-Odoi was named MOTM it's hard not to include a defender with a goal contribution.

David Luiz CB - Arsenal FC - 80 -> 83 Rated: After their 3-1 win midweek, Arsenal drew 0-0 against Manchester United on Saturday, extending their unbeaten run in the competition to seven matches. The Brazilian international had a good game defensively and almost helped the attackers to get a goal with a run in the second half, an important figure in the heart of defence.

T. Delaney CDM - Borussia Dortmund - 84 -> 86 Rated: Borussia Dortmund valiantly fought their way back into the win column with an impressive come from behind win at home to FC Augsburg, following a week of turbulent results. Thomas Delaney produced a remarkable display in the middle of the park. He was rock solid in defensive phases, making excellent tackles and recovering possessions. In addition, the Dane scored the all-important equaliser with a header just before the half-hour mark.

T. Soucek CDM - West Ham - 84 -> 86 Rated: A superb display of attacking football from West Ham handed them a thoroughly deserved 3-2 win over Crystal Palace on Tuesday evening. Two goals and an all-round outstanding performance from the Czech midfielder Soucek, irreplaceable in this form for The Hammer and he deservedly picked up MOTM.

Gündogan CM - Manchester City - 83 -> 85 Rated: Manchester City went top of the Premier League with an emphatic 5-0 victory over West Brom on Tuesday night. It was one of Gündogan's best performance of the season in a campaign where he has been excellent, scored two superb goals and generally wreaked havoc all night. Even more impressive that he has now more Premier League goals than any other City player.

M. Orsic LM - Dinamo Zagreb - 81 -> 84 Rated: The Eternal Derby between the two biggest and most popular clubs in Croatian football took place on Wednesday in Zagreb and defending champion Dinamo Zagreb took all three points with a 3-1 win. Mislav Orsic looks ready to pick up his second inform after he scored a brace from the LM position, another decent super sub for your team.

D. Tadic LM - Ajax Amsterdam - 83 -> 85 Rated: Ajax has moved seven points clear at the top of the Eredivisie after a hard-fought 3-1 victory over Willem II midweek and another 2-0 win away to AZ Alkmaar on Sunday. Tadic has had a difficult weeks in an Ajay shirt but he inspired the 3-1 win over Willem II with a goal and assist and picked up an 8 match rating from Vl.

R. Lukaku ST - Inter Milan - 87 -> 88 Rated: Inter Milan cemented their second spot in the Serie A table with a convincing 4-0 home win over Benevento Calcio and remain two points behind leader AC Milan. Both Inter strikers are options for an inform this week but with Lukaku scoring a brace i've opted for him instead of Martinez.

M. Salah ST - FC Liverpool - 91 -> 92 Rated: Liverpool secured back-to-back wins in the Premier League and continued their recovery with a 3-1 win ober West Ham, securing another valuable three points. Mo Salah played up top and struggled a bit in the first 45 minutes but ended his barren spell in the league with a beautiful goal for the opener before adding a second to take his total to 15 in the league now.

Y. Bounou GK - FC Sevilla - 76 -> 81 Rated: There aren't as many standout performances when it comes to keepers like last week so it's a 50/50 chance with Bounou to make it or not. Sevilla recorded a strong 2-0 victory against Eibar on Saturday in La Liga and now find themselves just a point behind Real Madrid in the table. Sevilla's keeper Bounou made a total of six saves in this game and helped his side keeping the clean sheet.

M. Wolf RWB - FC Cologne -76 -> 81 Rated: FC Cologne gave their survival hopes a shot in the arm with a 3-1 victory – their first on home soil in almost a year – over promoted side Arminia Bielefeld. Marius Wolf scored the first two goals to put his side on winning was from the RWB position, his first brace in his career. He deservedly picked up MOTM and POTW from Kicker and i would be surprised if he won't get in.

P. Gross CM - Brighton & Hove - 77 -> 81 Rated: Brighton Hove boosted their survival chances after securing their first home success of the season with a shocking 1-0 victory over a lacklustre Tottenham side. The only goal came from Trossard and it was Gross who assisted it and arguably put in his best showing this season. Unlucky he hit the post with his shot but still an impressive performance from the German and MOTM.

H. Onyekuru LM - Galatasaray - 77 -> 81 Rated: After a disappointing engagement in Lyon Onyekuru came back on loan to Galatasaray and appearantly that was the move for him he needed. Galatasaray recorded a 2-1 win away to Gaziantep and after subbed on Onyekuru scored both goals in his debut.

P. Bamford ST - Leeds United - 78 -> 82 Rated: Leeds United caused a major upset in the Premier League title race for Leicester City after securing a 3-1 win at King Power Stadium and made it a perfect week after their 2-1 win midweek against Newcastle. Patrick Bamford was by far the best player for Leeds United. The striker was involved in all three goals, scoring one and assisting two.

A. Silva ST - E. Frankfurt - 82 -> 84 Rated: Eintracht Frankfurt remain top four in the Bundesliga table as they sealed a 3-1 come back from behind win against Hertha Berlin welcoming Pal Dardai back as head coach. Once again it was the Portuguese André Silva with a back-to-back brace who run the show and pulled up to 16 goals for the season. He scored the important equaliser and added the second in injury-time.

C. Wilson ST - Newcastle United - 82 -> 84 Rated: Newcastle stopped a rot of 11 games without a win, picking up their first win in 2021 after beating Everton away with 2-0. Callum Wilson could have scored in the first half but his attempt got denied by Pickford but he still produced two great finished to hand his side the win.

L. Abergel CDM - FC Lorient - 70 -> 78 Rated: In a goal-laden fixture in Ligue 1, PSG suffered a shock 3-2 defeat to relegation-threatened FC Lorient on Sunday afternoon. Laurent Abergel opened the scoring after 36 minutes to put his side in front and even after two penalties from Neymar Lorient managed to bounce back. It was on Abergel again in injury-time as he assisted the winning goal for his Team and picked up an 8/10, the highest L'Equipe rating this week.

Sebá RM - Al-Shabab - 72 -> 79 Rated: Al-Shabab remains top of the league in Saudi Arabia after their 4-2 win midweek against Al-Wehda and their following 3-2 win against Abha. The Brazilian winger Sebá got 2 goals and 1 assist midweek and also recorded another goal and assist in their last win which might be enough for him to pick up the inform.

Toney ST - Brentford - 69 -> 77 Rated: Brentford put themselves back into the promotion race after two winless games with a trashing 7-2 home win over Wycombe. There are three options for an inform from this game, the one I've opted for is Toney who got himself two goals and an assist, one goal came from the penalty spot.

Rafa Mir ST – SD Huesca - 70 -> 78 Rated: ottom of the table SD Huesca recorded their second win of the season and ended their winless run of 8 games in all competitions witha 3-1 away win to Real Valladolid. The Spanish striker Rafa Mir was the one running the show with scoring all three goals for his side and picked up a perfect 3/3 match rating and MOTM for his performance.

J. Kuchta ST - Slavia Praha - 70 -> 78 Rated: Slavia Prague remain unbeaten on top of the league after their 6-2 win away to FC Fastav Zlin. Prague's forward Jan Kuchta got himself three goals and an assist in this game.