FIFA 21 Team of the Week 18 Predictions

Published on by Simpleblue 32 Comments Updated on 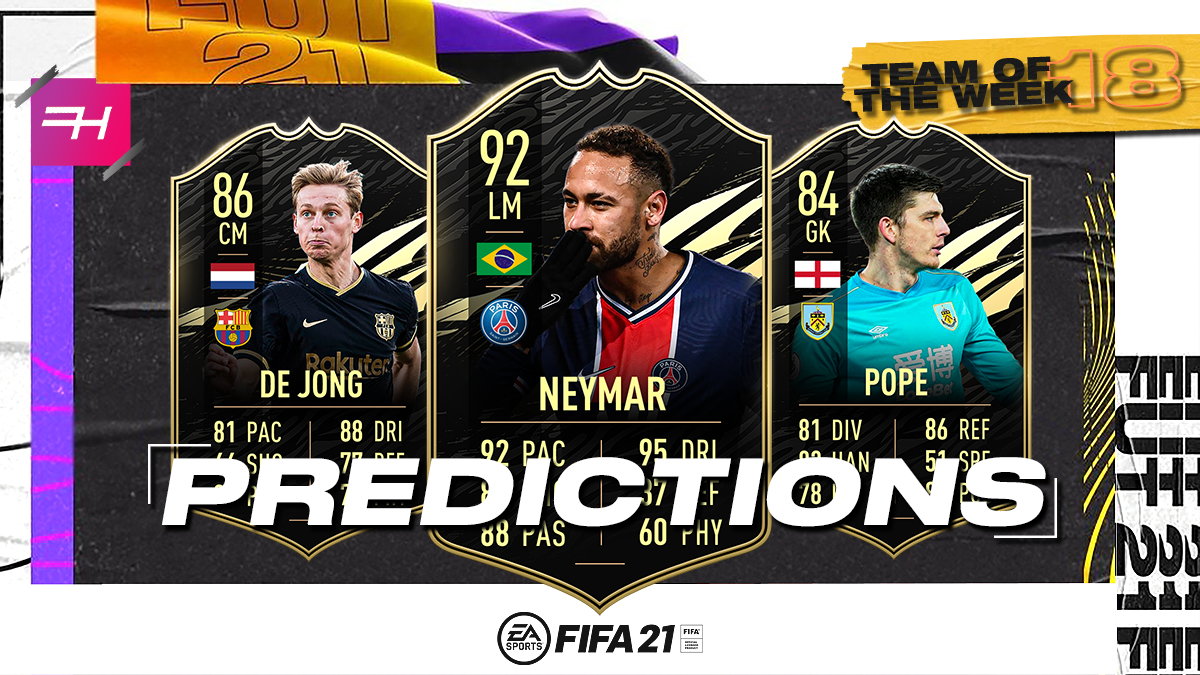 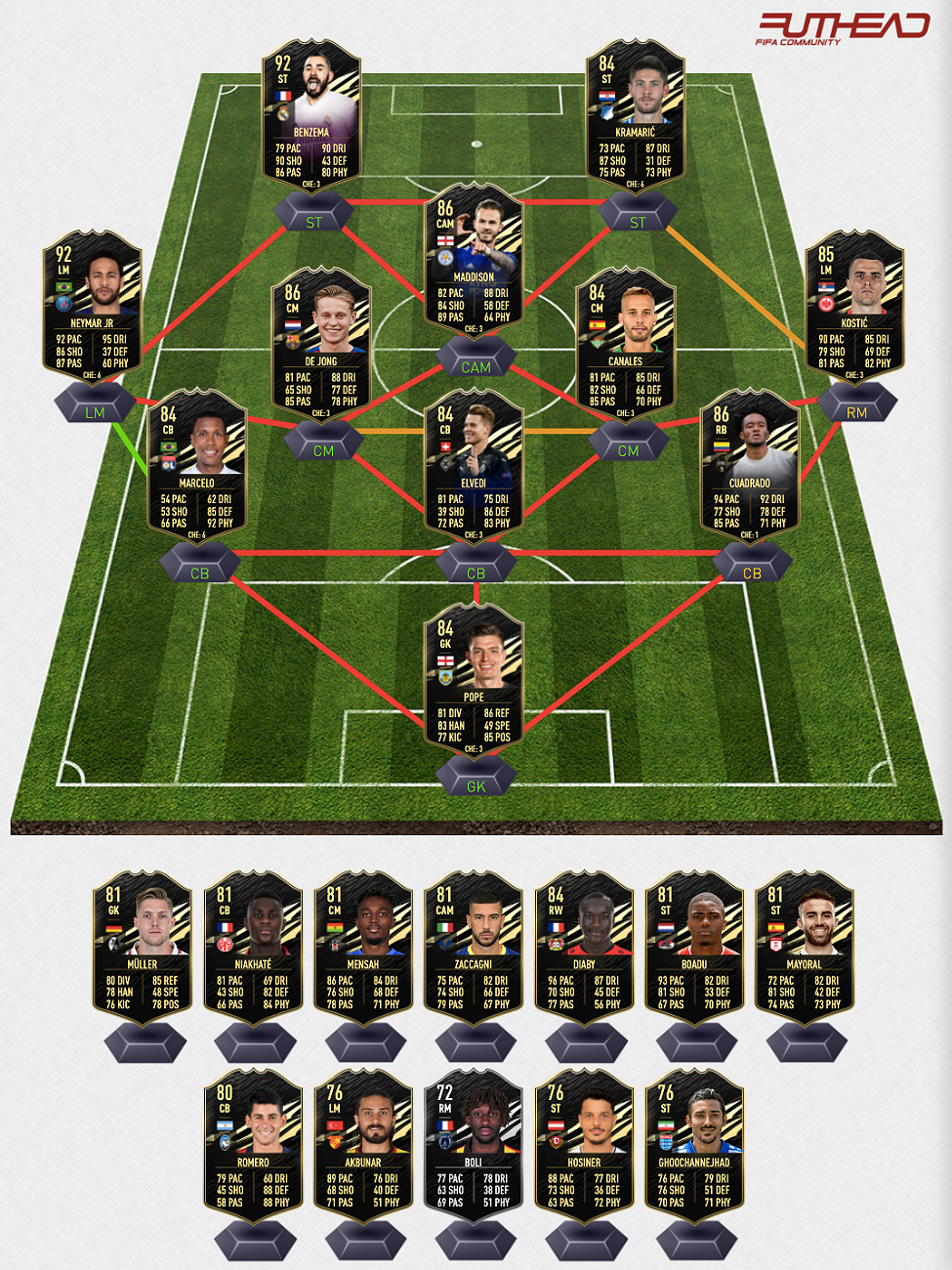 Nick Pope GK - FC Burnley - 82 -> 84 Rated: Liverpool suffered yet another blow in their bids to retain the Premier League title when they were beaten 1-0 by Burnley, ending the 68-game unbeaten home league record of Klopp's side. The only goal came from Barnes who convered the given penalty but it was Nick Pope who was crucial for his side producing string of unbelievable saves in the second half to deny Liverpool from scoring.

Marcelo CB - Lyon - 81 -> 84 Rated: Olympique Lyonnais showed no mercy to a youthful AS Saint-Etienne in the derby on Sunday, winning 5-0 at the Stade Geoffroy-Guichard to stay right in touch in the title race. Two of the five goals came from the Brazilian defender Marcelo who picked up an 8/10 for his performance.

Nico Elvedi CB - B. Mönchengladbach - 82 -> 84 Rated: Borussia Dortmund slipped out of the Bundesliga top four with a damaging 4-2 defeat to Borussia Mönchengladbach. The Swiss international Nico Elvedi showcased his predatory instincts by scoring a brace in the first half, adding another two goals to his tally after his winner in their midweek fixture against Werder Bremen.

Cuadrado RB - Piemonte Calcio - 84 -> 86 Rated: Juventus Turin closed the gap on league leader AC Milan with a 2-0 victory over Bologna on Sunday afternoon. Cuadrado nearly scored a spectacular own goal before it got saved by Szczesny. It was a game of hits and misses for him but he did get the assist for McKennie's goal and also won 11 duels.

F. De Jong CM - FC Barcelona - 85 -> 86 Rated: Barcelona made it four wins on the spin at the expense of relegation strugglers Elche on Sunday afternoon with a comfortable 2-0 win. De Jong, who is in good form at the moment, once again showed his worth with scoring the opener and assisting the second goal with a wonderful run and cross for Puig.

S. Canales CM - Real Betis - 82 -> 84 Rated: Real Betis recorded their second league win in a row with a narrow 2-1 win against Celta Vigo on Wednesday. Sergio Canales once again proved his importance for Betis with scoring both goals, he now scored six goals in the his last five games and picked up a perfect 3/3 match rating.

J. Maddison CAM - Leicester City - 84 -> 86 Rated: Leicester City piled on more misery over an erratic Chelsea side as they defeated them comfortably by 2-0 in their midweek fixture. James Maddison continued his great form as he scored yet another goal. He has been crucial for his team and has now scored in three consecutive games, picking up a 9/10 and MOTM.

F. Kostic LM - E. Frankfurt - 83 -> 85 Rated: Eintracht Frankfurt pulled into the European places with a 5-1 trashing of Arminia Bielefeld. Most people will expect Andre Silva to get the inform for his two goals but Kostic was the one who picked up a perfect 1 and MOTM from Kicker for his goal and assist and that's why i've opted with him.

Neymar LM - Paris SG - 91 -> 92 Rated: On a night when Pochettino's men were seeking a crucial outcome to secure top spot on the Ligue 1 table they certainly showcased their potential and cruised to a 4-0 win over Montpellier. Mbappé was named MOTM but his recent TOTY item ruled him out and with Neymar picking up an 8/10 from L'Equipe for his goal I'll take the risk even though he can get snubbed due to the possibilty of him being voted as the 12th man for TOTY.

A. Kramaric ST - Hoffenheim - 82 -> 84 Rated: Hoffenheim 1899 picked up three much-needed points in a 3-0 victory away to Hertha Berlin on Tuesday, ending their winless run of four games. Andrej Kramaric scored a brace after three games without scoring and picked up MOTM and POTW from Kicker from midweek fixtures.

K. Benzema ST - Real Madrid - 91 -> 92 Rated: Real Madrid were desperate to get back to winning ways following their defeats in the Spanish Super Cup and Copa del Rey and unfortunately for Alaves that's exactly what they did on Saturday night. It was another great performance from Benzema scoring two brilliant goals and despite being 33 years old he's still in impressive form.

F. Müller GK - SC Freiburg - 76 -> 81 Rated: There are a few of outstanding goalkeeper performances to choose from from the second keeper, two of them are coming from the Bundesliga. I've gone with Florian Müller who made a total of nine saves but as that wouldn't be enough he also saved a penalty right before the half-time, allowing his side to keep the 2-1 lead until the end of the game in the derby.

Niakhate CB - Mainz 05 -75 -> 81 Rated: RB Leipzig's title race suffered a shock setback on Saturday after they twice wasted a lead to slump to a 3-2 loss at Mainz 05. French defender Niakhate drew the home side level twice and even though Mainz conceded two goals he was crucial for Mainz, helping his side to grab the second win of the season.

Mensah CM - Besiktas JK - 75 -> 81 Rated: Besiktas Istanbul remain top of the league with two points ahead of Fenerbahce and extended their run of unbeaten games to ten with a 4-1 away win to Fatih Karagumruk. We haven't seen an inform from their derby win against Galatasaray last week so this is a risky inclusion but it's hard to ignore two goals from Mensah.

Zaccagni CAM - Verona - 75 -> 81 Rated: Hellas Verona came from behind to stun Napoli with a 3-1 home win on Sunday and Zaccagni got himself one goal and one assist to help his side secure three massive points. Gazzetta awarded him with an 8/10 match rating, the joint highest this week.

M. Diaby RW - Bayer Leverkusen - 81 -> 84 Rated: Bayer Leverkusen beat Borussia Dortmund 2-1 on Tuesday in the final game of the first half of the season. Moussa Diaby opened the scoring early for his side, set up the assist for Wirtz' winning goal and was a menace for Dortmund's defence throughout the course of the game. Kicker awarded him with a 1.5 match rating and MOTM.

Mayoral ST - FC Roma - 76 -> 81 Rated: After Roma got kicked out of Coppa Italia by Spezia they both faced each other again and it was a thriller where Roma bounced back in stoppage time despite a 90th minute setback from Spezia to win the game 4-3. After Mayoral got robbed last week for his two goals I'm willing to include him back to back after he again got a brace and a 7.5 from Gazzetta.

M. Boadu ST - AZ Alkmaar - 75 -> 81 Rated: Boadu has not scored as many goals as he probably should have this season but he was back to his clinical best in Sunday as AZ defeated Feyenoord 3-2 as he scored two goals with only two shots.

C. Romero CB - Atalanta - 74 -> 80 Rated: Atalanta Bergamo consigned AC Milan to their second league defeat of the season with an impressive 3-0 win at San Siro on Saturday after back-to-back draws against Genoa and Udinese. Cristian Romero was one of the top performers with scoring the opener, assisting Zapata's third goal and making a good number of important clearances. Gazzetta awarded his performance with an 8/10.

Akbunar LM - Göztepe - 68 -> 76 Rated: The Turkish Süper League provided a lot of high scoring games the past weeks and this inform might come from another. Goztepe picked up all three points in their midweek game against Genclerbirligi with a 4-0 win and Akbunar scored twice and added an assist to his game.

C. Boli RM - Paris FC - 62 -> 72 Rated: The only silver inform in TOTW could come from the second league in France where Boli scored one and assisted another two in a 4-2 win against Amiens.

P. Hosiner ST - Dynamo Dresden - 67 -> 76 Rated: It was a 7-goal thriller between league leaders Dresden and Kaiserslautern where Dresden came back two times from behind to win 4-3. Man of the Match was Hosiner who scored a brace and also assisted another two goals and deservedly picked up POTW in Germany's third divison.

Ghoochannejhad ST - PEC Zwolle - 67 -> 76 Rated: Eredivisie is providing hat-tricks on a weekly basis this year and so it is this week. PEC Zwolle came back from being down 1-0 early and the reason they did was Ghoochannejhad who got subbed on at half-time and bagged a hat-trick, one from the penalty spot.