FIFA 21 Team of the Week 17 Predictions 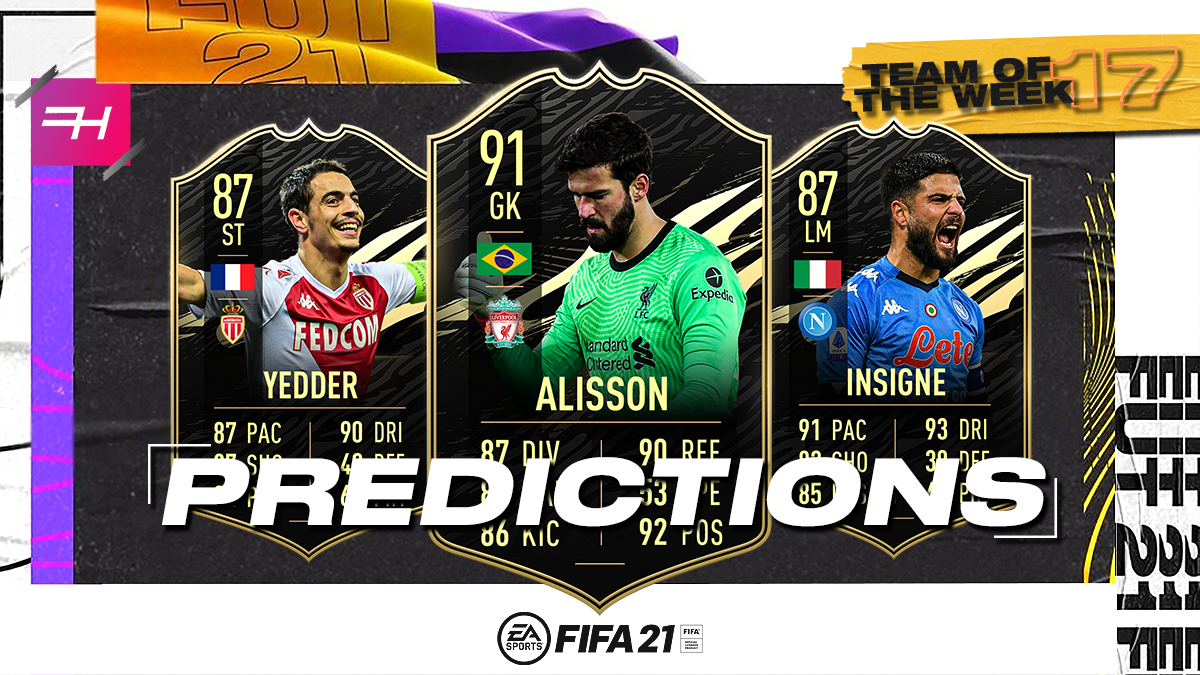 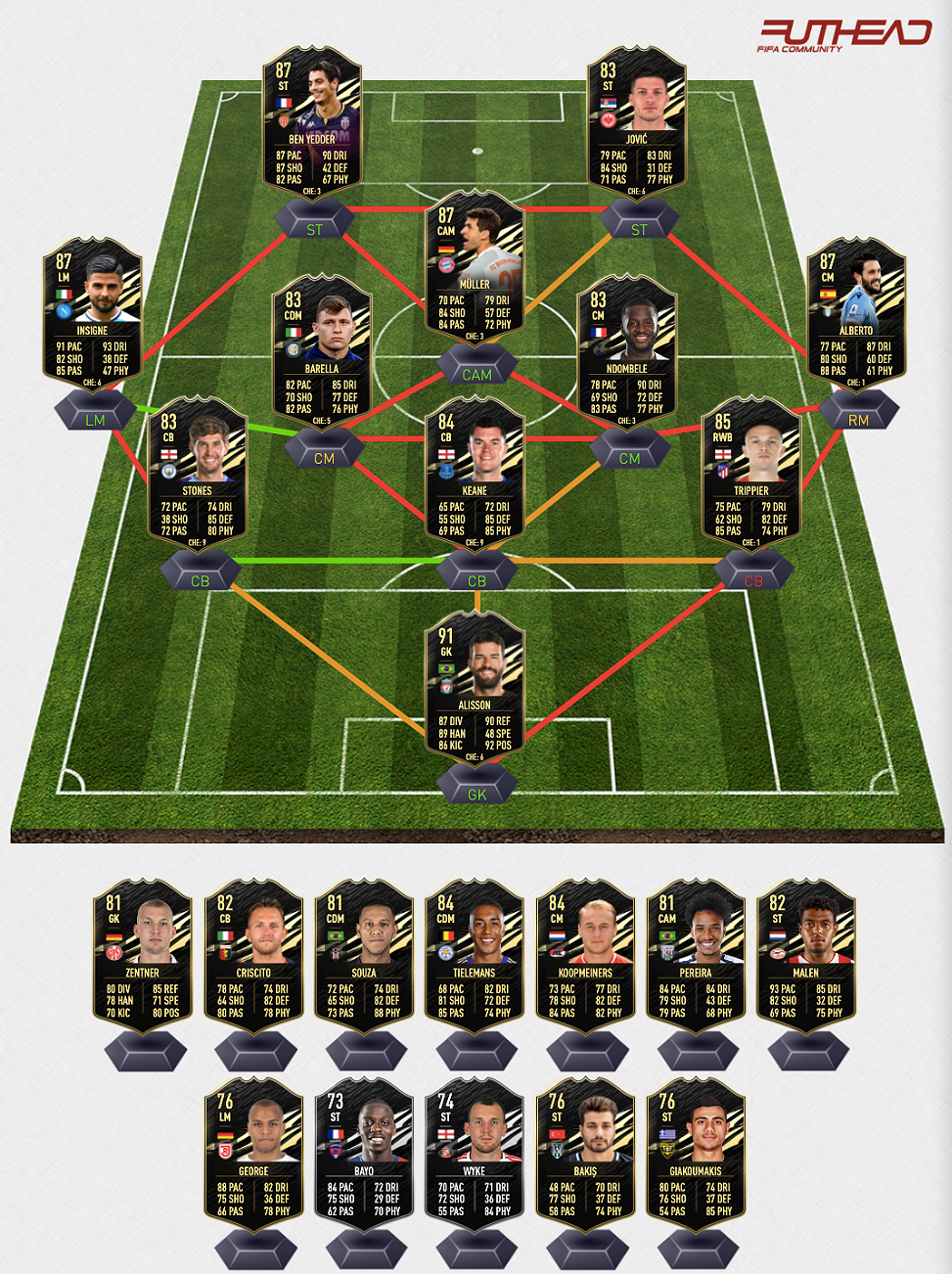 Alisson GK - FC Liverpool - 90 -> 91 Rated: Liverpool failed to take spot in the Premier League after being held to a goalless draw by Manchester United at Anfield. Alisson didn't have much to do the whole game but showed of when he was needed to deny Fernandes and Pogba from scoring the possible winner. Picked up an 8/10 and MOTM.

John Stones CB - Manchester City - 80 -> 83 Rated: Manchester City have sparked into life this season, and are now just tow points off the Premier League summit after hammering Crystal Palace 4-0 at the Etihad. John Stones once more showed why he has nailed down his spot at the heart of the City defence. The Englishman scored a brace and kept things tight at the back.

Michael Keane CB - FC Everton - 82 -> 84 Rated: Everton maintained their challenge for a Champions League spot with a 2-1 victory at Wolves thanks to Michael Keane's later header to move them into fourth spot of the Premier League. MOTM performance and due to the lack of options a serious contender this week.

Kieran Trippier RWB – A. Madrid - 85 -> 86 Rated: Atletico Madrid extend their lead at the top of La Liga table to four points following a hard-fought 2-0 win over Sevilla on Tuesday. The Englishman delivered the ball for Correa's opener and was involved in the second goal as well, as he played the ball to Llorente on the move. A fairly impressive return to action despite all the noise surrounding his ban from football. A 3/3 match rating from Marca and MOTM could bring his second inform on Wednesday.

N. Barella CDM - Inter Milan - 80 -> 83 Rated: Inter Milan came out on top in the Derby d'Italia with a convincing 2-0 win over Juventus on Sunday night to go top of Serie A. Nicolo Barella ruled the show with his performance this night, providing the assist for Vidal's opener before doubling Inter's lead with an early second half strike. Deservedly picked up an 8/10 and MOTM from Gazzetta.

T. Koopmeiners CM - AZ Alkmaar - 82 -> 84 Rated: AZ Alkmaar won their first top match of the season against PSV Eindhoven midweek with 3-1 away. Once again Alkmaar's midfielder Teun Koopmeiners was excellend with scoring 2 goals and also providing an assist, one goal from the penalty spot and the other brilliantly flicked over Mvogo by his heel. Vl awarded him with a n 8 and MOTM.

L. Alberto CM - Lazio Roma - 86 -> 87 Rated: Il Derby della Capitale took place in the city of Rome between Lazio and AS Roma on Friday and despite the difference in the league standings, Lazio secured an impressive and fully deserved 3-0 win. The 28-year-old Spaniard had one of the best performances of the season so far, scoring two brilliant goals and was a positive influence in Lazio's midfield. He deservedly picked up an 8/10 and MOTM from Gazzetta.

T. Müller CAM - Bayern Munich - 87 -> 88 Rated: Bayern Munich held out to take all three points in a 2-1 victory at home to Freiburg, extending their lead at the top of the table to four points. Müller looked sharp from the frist whistle, a well taken goal and an assist was a testament to just how crucial he is.

L. Insigne LM - Napoli - 86 -> 87 Rated: In an early fixture on Sunday Napoli was too much for Fiorentina, trashing them 6-0. Lorenzo Insigne was the star of the day with two goals and an assist to his name, picking up an 8/10 and Man of the Match from Gazzetta.

L. Jovic ST - Eintracht Frankfurt - 80 -> 83 Rated: Eintracht Franfurt took on Schalke 04 in the Bundesliga on Sunday and the Eagles extended their winning run in the league to four matches with their 3-1 win. Frankurt boosted themselves in recent days by announcing the return of Luka Jovic and the Serbian superstar was the one to put on a show after he came off the bench with scoring a brace. Kicker awarded him with a perfect 1 match rating and MOTM, it will be interesting to see if he's getting the inform with not having a Frankfurt card yet but i just can't ignore him.

Ben Yedder ST - AS Monaco - 86 -> 87 Rated: Monaco survived a spirited second-half fightback to earn a 3-2 victory at Montpellier on Friday. Ben Yedder's return to form was a key takeaway with him scoring a brace, one goal from the penalty spot, and he also was involved in Volland's opener after his volley hit the crossbar. An 8 from L'Equipe and MOTM, it looks like the Headliner upgrade is coming on Wednesday.

R. Zentner GK - Mainz 05 - 75 -> 81 Rated: Borussia Dortmund suffered yet another massive blow in their title aspirations as they were held to a 1-1 draw by bottom club 1. FSV Mainz 05 on Saturday. Dortmund had a lot of quality chances to score but thanks to goalkeeper Robin Zentner who made a total of 6 saves Mainz secured a valuable point away from home. Kicker awarded him with a 2 and MOTM.

D. Criscito CB - FC Genoa -78 -> 82 Rated: There aren't a lot of standout performances from defenders to choose from this week so I'm going with Criscito. Atalanta were held to a goalless draw against Genoa on Sunday to end Atalanta's winning run in Serie A and the Italian international was solid at the back to help his side secure a point. Gazzetta awarded him with a 7/10, he could miss out but it was a big result for Genoa so I'm willing to take the risk.

Souza CDM - Besiktas JK - 77 -> 81 Rated: A game where i fully expect to see an inform coming from is the derby between Besiktas and Galasaray which ended in a 2-0 home win for Besiktas who remain top of the league. After a goalless first-half and an early red card for Galatasaray it was the Brazilian Josef de Souza to break deadlock for Besiktas with eleven minutes left to play.

Y. Tielemans CDM - Leicester City - 81 -> 84 Rated: Leicester City earned their first home league victory against Southampton since April 2016 , ending a run of four without a win against the Saints at Kind Power Stadium with a 2-0 win on Saturday evening. The Belgium international Tielemans provided both assists from CDM and picked up an 8/10 and MOTM for his performance.

T. Ndombele CM - Tottenham Hotspur - 80 -> 83 Rated: Tottenham Hotspur managed to get back on track with a 3-1 win over Sheffield United after a disappointing draw against Fulham. Ndombele impressed once again and netted the goal of the game with a stunning lob over Ramsdale to make it 3-1 and settle down the nervs.

M. Pereira CAM - West Brom - 76 -> 81 Rated: West Bromwich stunned Wolverhampton to win the Black Country derby 3-2 at Molineux which tokk West Brom to within three points of safety from the relegation zone. Man of the Match was Pereira who scored both goals from the penalty spot for his side, usually a player i wouldn't really consider putting in but it was a huge win for West Brom.

D. Malen ST - PSV Eindhoven - 78 -> 82 Rated: SV Eindhoven came from behind to defeat Sparta Rotterdam in a 5-3 thriller at Het Kasteel. The Dutch international Malen got himself two goals and provided one assist to turn the game around, the possible inform might not be that interesting for most of the people due to his recent Showdown SBC and the amount of people who completed it.

M. Bayo ST - Clermont Foot - 63 -> 73 Rated: It looks like we are getting another silver inform this week, the second possible one in this prediction. Clermont Foot 63 faced Dunkerque at home on Saturday and took all three points with a convincing 5-0 win with Bayo scoring a hat-trick.

C. Wyke ST - FC Sunderland - 64 -> 74 Rated: With a poor run of form recently Sunderland was looking for a turnaround against AFC Wimbledon and thanks to Charlie Wyke they managed to went home with a 3-0 victory and all three points. The Welsh striker scored all three goals and picked up MOTM.

S. Bakis ST - Heracles Almelo - 67 -> 76 Rated: Heracles hosted FC Emmen in the Eredivisie on Tuesday and managed to bounce back from the weekend's home defeat to Vitesse with a convincing 4-0 while Emmen is still looking for their first league win of the season. Undisputed Man of the Match was Sinan Bakis who bagged a hat-trick and picked up an 8 from Vl.

Giakoumakis ST - VVV-Venlo - 66 -> 76 Rated: What a signing the Greek forward has been for VVV-Venlo, who defeated ADO Den Haag 4-1 midweek. The Eredivisie top scorer continued his incredible form with scoring all 4 goals for his side and was deservedly voted Player of the Week.