FIFA 21 Team of the Week 16 Predictions

Published on by Simpleblue 32 Comments 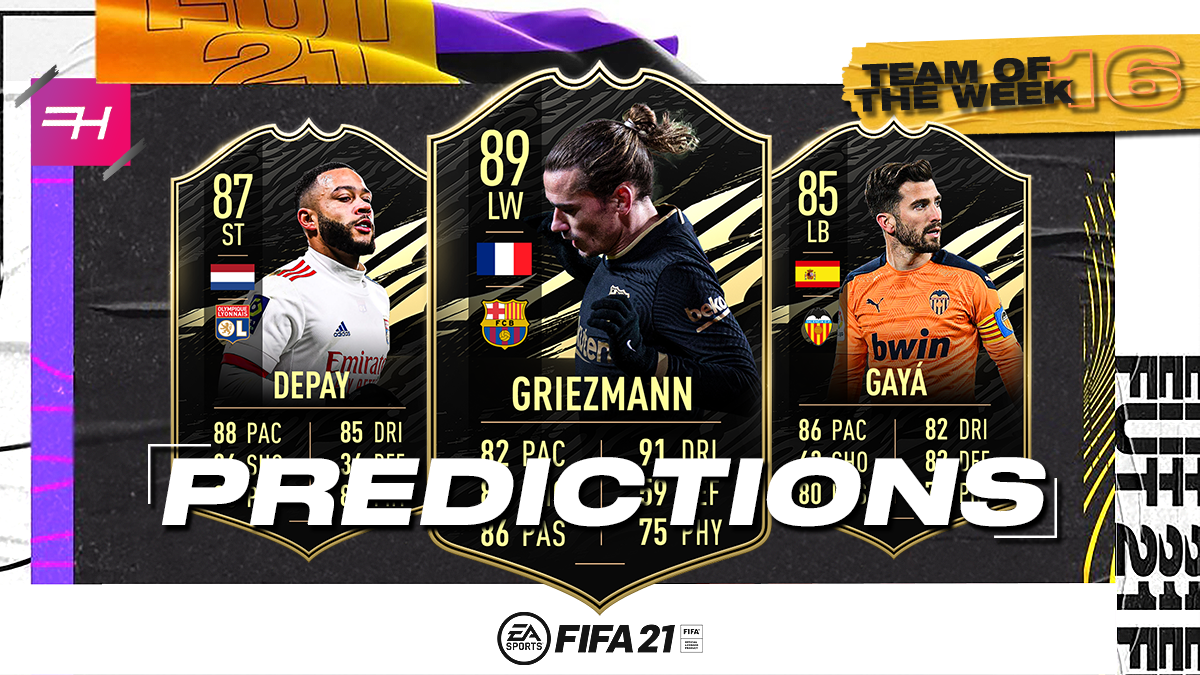 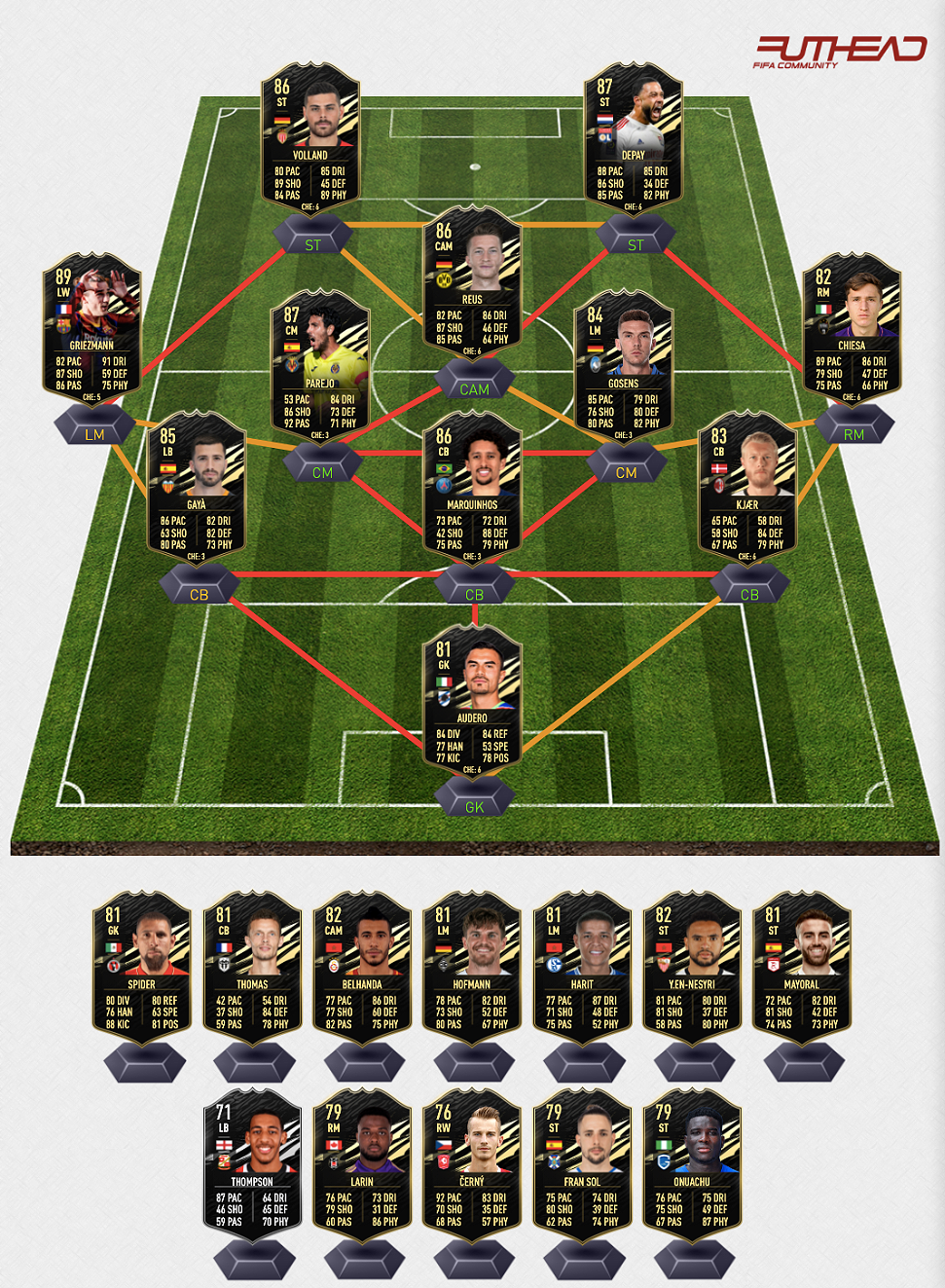 Emil Audero GK - Sampdoria - 77 -> 81 Rated: The 23-year-old goalkeeper gave his side the ideal platform for a shocking victory over Inter Milan midweek, saving an early Alexis Sanchez penalty and made a number of vital saves to secure a narrow win against the leagues top scoring side. Gazzetta awarded him with a 7.5.

Jose Gayá LB - FC Valencia - 83 -> 85 Rated: This is a player who could probably miss out but who I've included due to the fact the options for higher rated defenders or gold defenders in total are really rare this week. Valencia won their away match against Real Valladolid 1-0 and Gayá provided the assist, might be enough this week.

S. Kjaer CB - AC Milan - 80 -> 83 Rated: Milan got back to winning ways with a 2-0 win over Torino on Saturday evening, re-establishing their lead at the top of the table. Kjaer produced a vital last-ditch tackle to deny Torino a clear goalscoring opportunity, flying across to block a vicious shot. Gazzetta awarded him with a 7 which was enough in the past for a defender to get the inform.

Marquinhos CB - Paris SG - 85 -> 86 Rated: Nearly everyone is going with Keylor Navas which is understandable but I'm willing to take the punt on Marquinhos due to the lack of high rated denders/gold defenders in general. Marquinhos was involved in Kean's opener with a header off the post and could have scored another header that Larsonneur rejected. He also was involved in the build-up for Sarabia's goal, really good match in PSG's 3-0 win agains Stade Brennais.

Parejo CM - FC Villareal - 86 -> 87 Rated: Villareal stormed through Balaidos on Friday evening and scored four times in the opening half to claim a big 4-0 win away to Celta Vigo. There are two players from Villareal who could get the inform, one of them is Dani Parejo. He assisted Moreno for the first goal and got involved in the scoring on 19 minutes. Marca awarded him with a perfect 3/3 match rating, his second inform could be on the way.

R. Gosens LM - Atalanta Bergamo - 82 -> 84 Rated: There are two matchdays counting towards TOTW in Serie A this week and this one could came from midweek. Atalanta strolled to a straightforward 3-0 win over relegation-threatened Parma on Wednesday afternoon and the German international Robin Gosens got himself a goal and an assist from LM and picked up a 7.5 from Gazzetta.

F. Chiesa RM - Piemonte Calcio - 78 -> 82 Rated: Juventus ran out convincing 3-1 winners against AC Milan midweek, two goals from Chiesa helped his side inflict defeat on AC Milan for the first time this season in Serie A and closed the gap on the leaders. He could have had a hat-trick but a brace was enough for him to pick up an 8 and MOTM from Gazzetta.

M. Reus CAM - Borussia Dortmund - 85 -> 86 Rated: Borussia Dortmund made a huge stride forward in their fight for the Champions League spots with an important 3-1 win over RB Leipzig on Saturday. Reus is looking to get back in form with two assists to help his side, probably Reus' best performance of the season so far. Haland got MOTM in that game but with his Headliner Card actually being in packs i've opted for Reus as he got a 1.5 from Kicker, the same as Haland.

A. Griezmann LW - FC Barcelona - 88 -> 89 Rated: Barcelona trashed Granada 4-0 in the La Liga to extend their winning run in the league to three games and keep the pressure on both Madrid sides. Griezmann seems to be finding his confidence again and needed a performance like this. He scored a brace and setted up Messi for Barcelona's second goal. With TOTY around the corner Messi is unlikely to make it due to his TOTY inclusion and therefore I've gone with Griezmann.

K. Volland ST - AS Monaco - 84 -> 86 Rated: Returning from the winter break, AS Monaco secured a vital 5-2 victory away at Lorient midweek and a convincing 3-0 home win against SCO Angers on Saturday. It was once again Kevin Volland proving his worth. He got himself a goal and an assist in both games and picked up an 8 and MOTM from L'Equipe for his performance against Lorient. Probably not the most wanted card to have but i would be shocked if he didn't make it.

M. Depay ST - Lyon - 86 -> 87 Rated: Leaders Lyonnais asserted their title credentials with a 3-2 win over Lens midweek and a 2-2 draw against Rennais after coming back from two goals down and secured the symbolic title of autumn champions. Crucial in both games for his side was the Dutch international Depay who scored a brace against Lens and got a goal and an assist against Rennais.

J. Orozco GK - Tijuana - 77 -> 81 Rated: There have been a few great goalkeeper performances to choose from, one is Club Tijuana's Orozco. Xolos faced last year's runners-up Pumas on matchday 1 in a match that ended in a 0-0 draw. Beside the defense Orozco was one of the main reasons his side didn't concede a goal with a total of 8 saves.

R. Thomas CB - Angers SCO -76 -> 81 Rated: LOSC Lille was falling to their first home defeat of the season 2-1 to SCO Angers. Defender Romain Thomas was the unlikely source of both goals for SCO and picked up an 8 and MOTM from L'Equipe.

Y. Belhanda CAM - Galatasaray - 78 -> 82 Rated: The final match of the matchday on Saturday was between Galatasaray and Genclerbirligi and Galatasaray steamrolled them 6-0. Man of the Match was Younes Belhanda who scored his first hat-trick since 2013 in the last 15 minutes of the first half for his side.

J. Hofmann LM - B. Mönchengladbach - 77 -> 81 Rated: Borussia Mönchengladbach had a high profile match to play against Bayern Munich last Friday and made a huge comeback after being 0-2 down during the early stages of the game to grab all three points. Jonas Hofmann put in an outstanding performance with two goals and one assist and claimed a perfect 1 match rating and MOTM rating from Kicker.

A. Harit LM - FC Schalke 04 - 77 -> 81 Rated: Schalke 04 have put an end to their wretched run of results in the Bundesliga with a 4-0 win over Hoffenheim on Saturday which was the club's first Bundesliga win since against Mönchengladbach in January 17, 2020. Schalke Hero was the American teenager Hoppe who scored a hat-trick but with him not being in FUT the only other reasonable option is Harit who scored one and assisted another 3.

B. Mayoral ST - Roma FC - 76 -> 81 Rated: Roma has been far from their best in recent games, their latest two victores coming by one-goal margins. They faced last-place Crotone away and thanks to their 3-0 first-half lead they came away as 3-1 winners. The Spanish international Mayroal got himself a brace with the second goal being a stunning long range strike and picked up an 8 and MOTM from Gazzetta.

En-Nesyri ST - FC Sevilla - 78 -> 82 Rated: Sevilla came out 3-2 winners over Real Sociedad on Saturday afternoon in a game where four of the five goals have been scored in the first 20 minutes. Real Sociedad was unable to stop the Moroccan striker En-Nesyri who scored all three goals for his side and claimed a perfect 3/3 match rating and MOTM.

D. Thompson LB - Swindon Town - 61 -> 71 Rated: Another silver inform could be on it's way and it's again a defender. Dominic Thompson got himself three assists in Swindon Town's 3-2 win against Ipswich.

C. Larin RM - Besiktas - 72 -> 79 Rated: With no Premier League football it's likely we'll see a few more players from smaller leagues and this one is coming from the Turkish Süper Ligue. Besiktas trashed Rizespor midweek with 6-0 and Larin had a stellar performance with four goals and one assist.

V. Cerny RW - FC Twente - 66 -> 76 Rated: FC Twente easily won their visit to FC Emmen with 4-1 on Saturday and the most important player for Twente was Vaclav Cerny who got himself two goals and an assist which should be enough for him to pick up the inform on wednesday.

Fran Sol ST - CD Tenerife - 73 -> 79 Rated: Usually there are always a decent amount of hat-tricks when it comes to players for reserves but this week it was really quite. Not much worse was Fran Sol's performance tho, he scored a brace and also got an assist in his side's 3-0 win over Cartagena.

P. Onuachu ST - Genk - 72 -> 79 Rated: KRC Genk faced KAS Eupen away in their first game of 2020 and went home with all three points after a 4-1 victory. Belgium striker Onuachu continued where he left off in 2020 and grabbed a hat-trick, two goals came from the penalty spot.