FIFA 21 Team of the Week 15 Predictions

Published on by Simpleblue 35 Comments 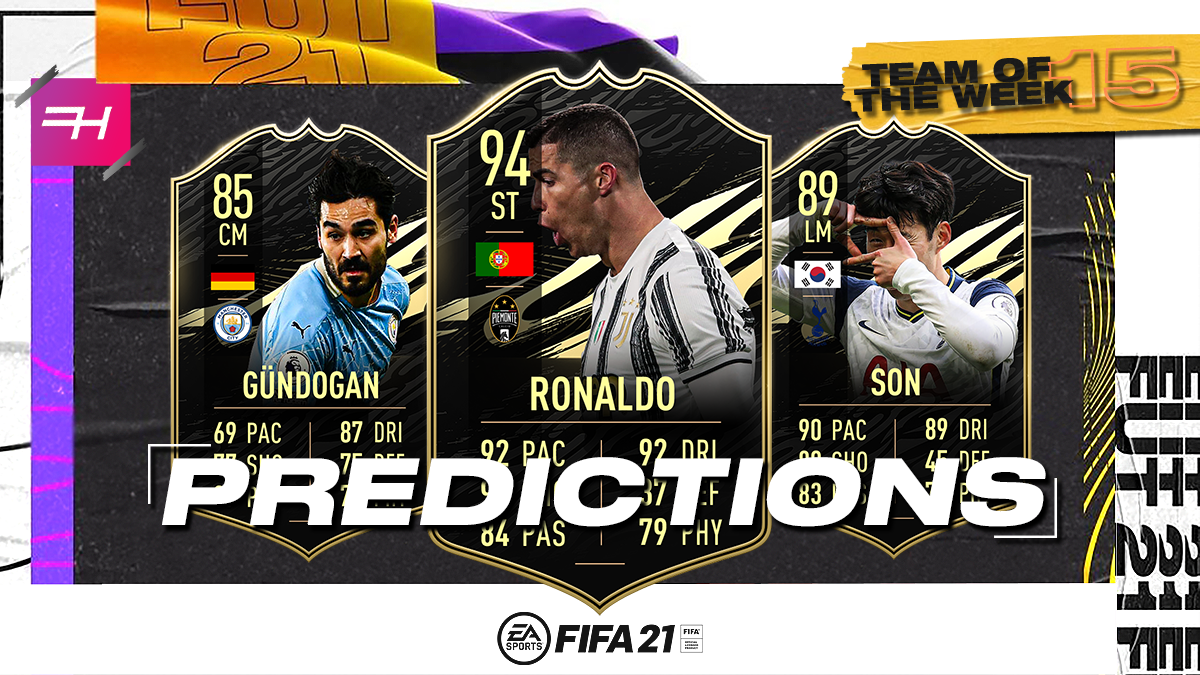 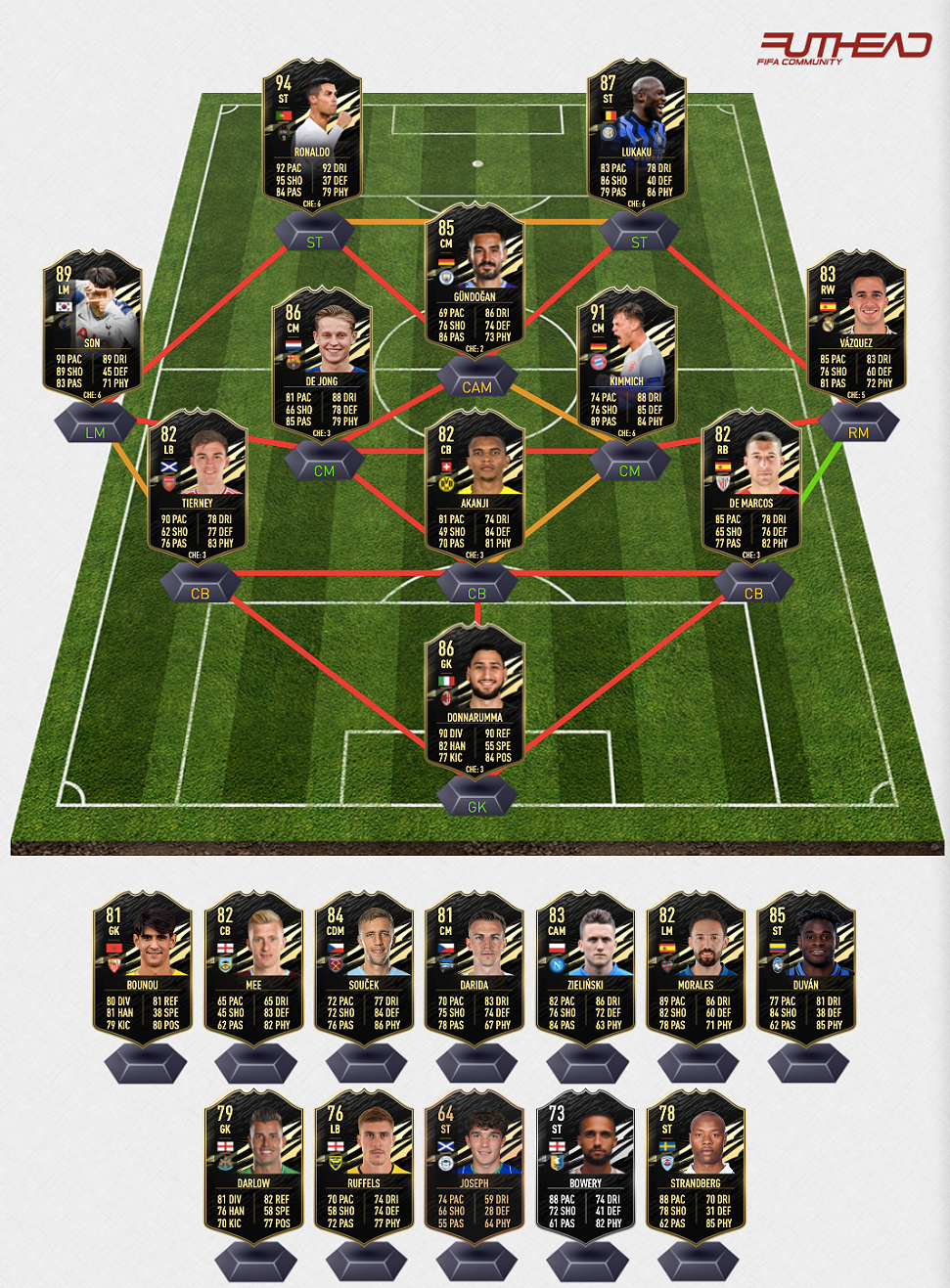 G. Donnarumma GK - AC Milan - 85 -> 86 Rated: AC Milan stay top of the Serie A table after an impressive 2-0 win away to Benevento on Sunday evening, despite having played for an hour with ten men after Tonali got send off. Donnarumma was crucial for his side, making a total of 5 saves claimed a 7 match rating from Gazzetta.

M. Akanji CB - Borussia Dortmund - 78 -> 82 Rated: Borussia Dortmund started off 2021 in the best possible way with a hard fought 2-0 home win against in-form Wolfsburg on Sunday. It was a top class performance from Akanji who was solid enough to deal with the threat of Weghorst and scored the opener with a rocking header to hand Dortmund the lead. Kicker awarded him with MOTM and he could pick up his first inform this week.

K. Tierney LB - Arsenal London - 78 -> 82 Rated: Arsenal produced their best Premier League performance of the season beating West Brom 4-0. The Scottish international grabbed himseld an extremely impressive goal and then went on to grab an assist wile setting-up Lacazette's second of the night. Tierney got awarded with an 8/10 and MOTM and should pick up the inform this week.

De Marcos RB – A. Bilbao - 78 -> 82 Rated: High rated options for defenders are rare this week and especially La Liga isn't providing much so I'm glad I can include De Marcos. The right-back got the assist for the only goal in Bilbao's 1-0 win against Elche and also made a goal-line clearance.

Ilkay Gündogan CM - Manchester City - 83 -> 85 Rated: Manchester City's electric performance at Stamford Bridge saw them run out 3-1 winners over Chelsea on sunday evening. Ilkay Gündogan pulled the strings the whole time in midfield and also scored a brilliant goal when his strike was fired into the bottom corner. He picked up a 9/10 and MOTM for his performance and could result in a well-deserved inform on wednesday.

J. Kimmich CDM - Bayern Munich - 90 -> 91 Rated: Bayern Munich survived a brief scare to overcome Mainz in a second-half blitz, easing to a 5-2 victory on Sunday evening. Kimmich made his first start since his injury layoff and showed why he is one of the most important players for his team. The German kickstarted the comeback as he finished the move for the first goal before setting Sané up for the equaliser and even though Neuer got MOTM from Kicker I'll take the punt on him.

De Jong CM - FC Barcelona - 85 -> 86 Rated: After a disappointing home draw to Eibar to end 2020, Barcelona started 2021 perfectl and won their away match against SD Huesca 1-0. The only goal of the game came from the Dutch international De Jong who put the ball into the net after Messi's wonderful pass.

Son LM - Tottenham Hotspur - 88 -> 89 Rated: Tottenham returned to winning ways with a resounding 3-0 win over Leeds United after a run of four matches without one. Son was yet again his clinical self as he scored from his first shot on target and also assisted anothe goal for Alderweireld. Even though Hoibjerg was named MOTM i've decided to go with Son who was rewarded with a 8/10 for his performance.

Lucas Vázquez RW - Real Madrid - 80 -> 83 Rated: Real Madrid bounced back from their midweek stalement disappointment to grab all three points against an in-form Celta Vigo side in a 2-0 home win. Vazquez continues to impress and got himself a goal and an assist, this time from the right-wing position. Marca awarded his performance with a perfect 3/3 match rating which could result in an inform this week.

R. Lukaku ST - Inter Milan - 86 -> 87 Rated: After a medicore first half which ended in a 2-2 draw, Inter demolished Crotone in the second half scoring 4 goals to win 6-2. Man of the Match was Lautaro Martinez who got himself three goals but as he recently is in TOTW i've opted with Lukaku who got himself a goal and an assist and also an 8 from Gazzetta.

C. Ronaldo ST - Piemonte Calcio - 93 -> 94 Rated: Juventus earned a crucial 4-1 victory against Udinese to keep themselves alive in the Serie A title race. The Portuguese superstar started off 2021 in fine form as he grabbed a brace and an assist to cap off a brilliant individual performance. With TOTY just around the corner i can see Ronaldo miss out this week but i just can't avoid him with an 8 from Gazzetta.

Y. Bounou GK - FC Sevilla - 76 -> 81 Rated: Goalkeepers where a bit hard to pick this week as there haven't been any real standout performances. One who could get the inform tho is Sevilla's keeper Bounou. Despite not having a huge amount of saves he did save Fekir's penalty 15 minutes before the end of the game to keep the score 1-1. Marca awarded him with a perfect 3/3 match rating and with the game being a derby i've decided to include him.

Ben Mee CB - FC Burnley -79 -> 82 Rated: An important game for both sides took place midweek between Burnley and Sheffield and it was on Burnley to take all three points at home with a 1-0 win. The only goal came from Ben Mee who also was named MOTM.

T. Soucek CDM - West Ham - 81 -> 84 Rated: West Ham produced a smash and grab performance to take all three points off Everton on New Year's Day. Tomas Soucek once again proved why he's so important for his team with scoring the only goal minutes before the end of the game and picked up an 8/10 and MOTM.

V. Darida CM - Hertha BSC - 77 -> 81 Rated: There are not a lot of options from the Bundesliga this week and usually this is one who could easily miss out but with a few leagues not having played i can see him getting in. Darida got himself two assist in Berlin's 3-0 victory against Schalke.

P. Zielinski CAM - Napoli - 80 -> 83 Rated: Napoli came out on top in a trip to Sardinia, where an impressive second half saw them claim a 4-1 victory against Cagliari. The Polish international Piotr Zielinski scored a brace for his side from CAM and got awarded with an 8 from Gazzetta, enough to pick up the inform this week i think.

Morales LM - UD Levante - 79 -> 82 Rated: La Liga offered quite a few options on the wings this week with two matchdays counting towards TOTW and this one is coming from Levante's midweek fixture against Betis Sevilla. Levante took all three points in an entertaining 4-3 win with Morales scoring two and assisting another.

D. Zapata ST - Atalanta Bergamo - 83 -> 85 Rated: Atalanta started 2021 in the best way imaginable, putting high-flying Sassuolo to the sword to claim a 5-1 win in Bergamo. Duvan Zapata continues his impressive record against Sassuolo and got himself two goals and an assist. He picked up an 7.5/10 match ratings from Gazzetta and it looks like his first inform of the season is on the way.

Karl Darlow GK – Newcastle - 73 -> 79 Rated: There's a risk with including three goalkeepers but I can't ignore one of the best keepers of the Premier League Season. Darlow once again was crucial for his side midweek in their 0-0 draw against Liverpool with making 5 saves and he was awarded with a 9/10 and MOTM.

J. Ruffels LB - Oxford - 68 -> 76 Rated: It's always a safe pick if a defender got himself goals in a win and so it is this time. Oxford won 5-1 against Burton and Ruffels got himself two goals and an assist, there is another option with Oxford's RB Sam Long who got 3 assists but i think Ruffels deserves it more.

K. Joseph ST - Wigan Athletic - 52 -> 62 Rated: We haven't seen many bronze informs this year so this is a bit of a risk including him but I can't ignore three goals. Wigan won their midweek fixture against Burton 4-3 and Joseph got himself a hat-trick.

J. Bowery ST - Mansfield Town - 63 -> 73 Rated: Another hat-rick is coming from the League Two. Mansfield won their home game against Port Vale 4-0 and Bowery got himseld 3 goals which should be enough for him to pick up the inform.

C. Strandberg ST - Abha Club - 70 -> 78 Rated: This inform could come from the Saudi Professional League in the name off Carlos Strandberg. Abha won their away match against Al-Ain with 4-2 and Strandberg managed to score 3 goals for his side.