FIFA 21 Team of the Week 14 Predictions

Published on by Simpleblue 23 Comments 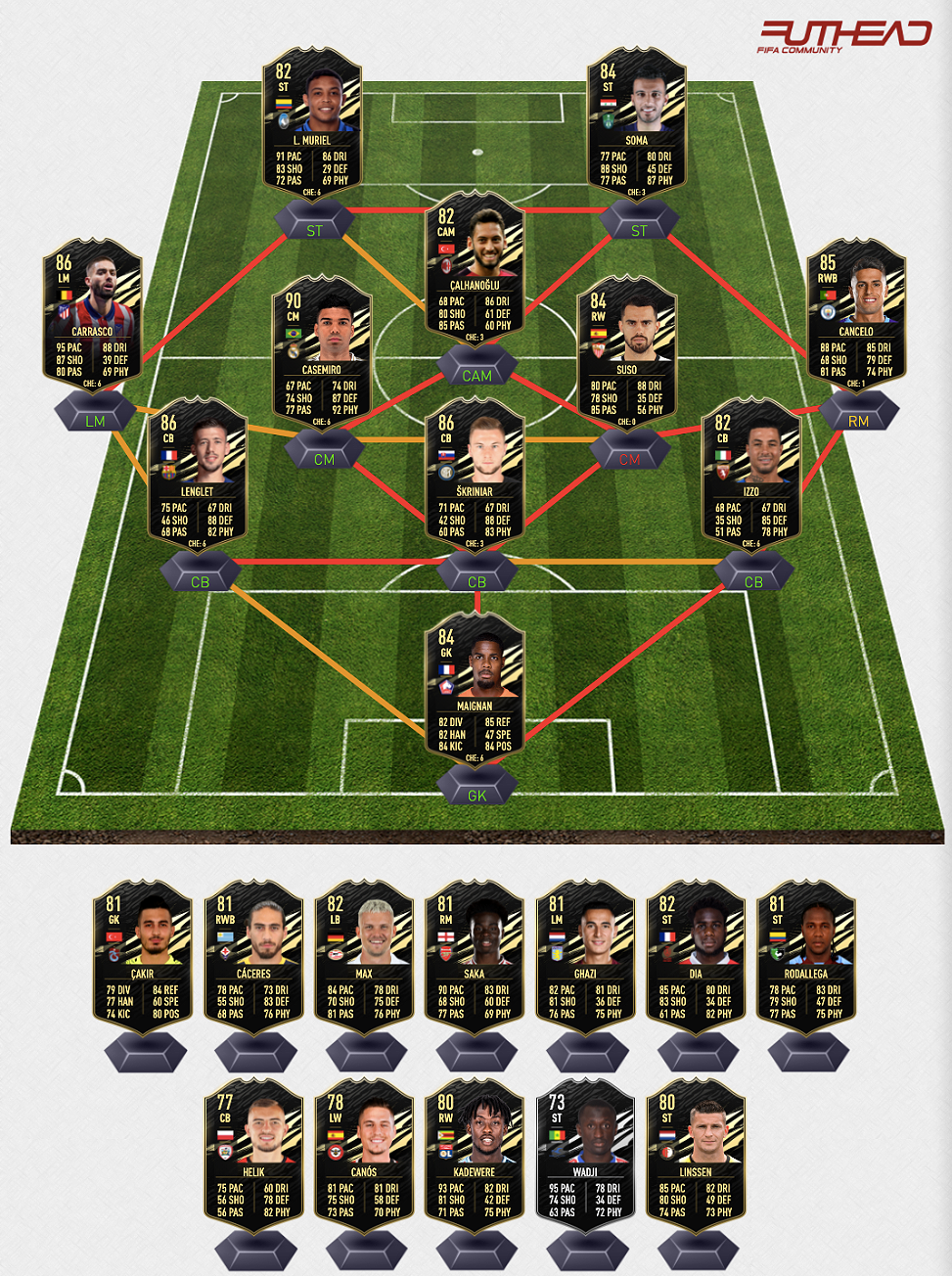 Mike Maignan GK - LOSC Lille - 82 -> 84 Rated: Lille continued their relentless form with a 3-2 win against Montpellier after Montpellier had twice come from behind. Mike Maignan just made a total of 4 saves and conceded twice but he still got rewarded with an 8/10 from L'equipe and the fact there are not many high rated goalkeepers this week let him stand a chance to be in.

C. Lenglet CB - FC Barcelona - 85 -> 86 Rated: Barcelona maintained the pressure on Real Madrid and Atletico Madrid at the top of La Liga table after securing a convincing 3-0 win over Valladolid on Tuesday. Lenglet had a difficult run of performances but responded with a goal at the right time, the fact he helped his side to keep a clean sheet and a 2/3 match rating from Marca could see him pick up the inform.

M. Skriniar CB - Inter Milan - 85 -> 86 Rated: Stationed in the three-man central defensive unit again, Skriniar completed his primary duies without much of a fuss. Saw a lot of the ball while also playing in a key pass. His most important contribution, though, was the imposing header that sealed all three points for Inter Milan and Gazzetta awarded his goal and effort with a 7.

Armando Izzo CB - FC Torino - 79 -> 82 Rated: Another inform could come from a mid-week fixture in Serie A where the game between Napoli and Torino ended in a 1-1 draw. Torino took the lead with Armando Izzo scoring after a corner and only the stoppage-time equaliser from Insigne stopped Torino from taking all three points. Usually one goal in a draw wouldn't be enough but the fact it was against Napoli and Gazzetta awarded him with a 7.5 could see him get the inform on Wednesday.

Cancelo RWB - Man City - 83 -> 85 Rated: This one i'm not too sure about but due to the lack of options from the Premier League fixtures i'm willing to take the punt on Cancelo. Manchester City cruised to a 2-0 victory over Newcastle on Saturday, closing the gap on Liverpool to five points. Cancelo wasn't directly involved in both goals but played the key pass to Sterling who delievered for Gündogan's first and it was Cancelo again who crossed the ball into the middle for Torres second goal.

Casemiro CM - Real Madrid - 89 -> 90 Rated: In their final home game of the year, Real Madrid overcame a stubborn Granada 2-0 to go joint top of the table with Atletico Madrid. Casemiro, who has made a habit of scoring big goals for Real, lived up to his billing by scoring the opener against Granada. He could miss out on an inform due to his recent Freeze Card but i'll take the gamble on him.

Calhanoglu CAM - AC Milan - 79 -> 82 Rated: AC Milan managed to defeat Lazio in a thrilling game which was the perfect ending to 2020. Calhanoglu was the most creative player on the pitch. With two assists in the game, the Turkish midfielder was a key player. His well-taken penalty was just the icing on the cake, Gazzetta awarded his MOTM performance with a 7.5.

Y. Carrasco LM - A. Madrid - 84 -> 86 Rated: Atletico Madrid recorded an impressive 2-0 win away to Real Sociedad on Tuesday evening. Carrasco got subbed on in the first half and delivered the ball onto Hermoso's head right after the second half started to make it 1-0. He did an incredible amount of work on the left-hand side and was the nerve-centre of Atletico's attack. Was also involved in the second goal and got awarded with 2/3 stars from Marca which could see him pick up his second inform.

Suso RW – FC Sevilla - 81 -> 84 Rated: Both Valencia and Sevilla were looking to return to winning ways in their top flight match and it was on Sevilla who took all three points in their clash on Tuesday evening. The winning goal came from the Spanish winger Suso which was his first goal of the season. Marca awarded him with 2/3 stars and even though he wasn't named MOTM i can see sneak him in due to the lack of options.

Omar Al-Soma ST - Al Ahli - 81 -> 84 Rated: With the lack of options this week for the striker spots i'm happy to include Al Soma. Al Ahli recored a 2-1 win against Al Raed in the Saudi Professional League on Sunday and Al Soma got himself a goal and an assist which could be enough for him to pick up his second inform this week.

L. Muriel ST - A. Bergamo - 79 -> 82 Rated: There have been a lot of draws this week including mid-week fixtures and so it was between Bologna and Atalanta. Atalanta fumbled an early 2-0 lead against Bologna but i'm still expecting Muriel to get the inform from that draw after he scored both goals and got a 7.5 match rating from Gazzetta.

Cakir GK - Trabzonspor - 77 -> 81 Rated: There have been a few goalkeepers this week with good performances but most of them are silver so i'm willing to take the punt on Cakir who made a total of six saves in Trabzonspor's 1-0 win against Hatayspor in the Turkish Super League.

Martin Caceres RWB - Fiorentina -76 -> 81 Rated: Juventus saw their unbeaten start to the Serie A Season come to a crushing end as Fiorentina thumped the reigning champions 3-0 in Turin. One of the three goals came from former Juventus defender Martin Caceres who tapped in a low cross from Biraghi. Gazzetta awarded his performance with a 8/10 and the fact Fiorentina kept a clean sheet could help him picking up an inform.

Philipp Max LB - PSV Eindhoven - 79 -> 82 Rated: PSV came from behind to coast to a comfortable 4-1 win over VVV-Venlo in the final game in 2020 on Tuesday night. PSV's Left-back Philipp Max converted from the spot in the 35th minute to put PSV on leven terms and got the assist for the 2-1 from a corner. Vl awarded Max' with an 8 and his first inform might be on the way.

El-Ghazi LM - Aston Villa - 75 -> 81 Rated: Ten man Aston Villa piled the misery on Crystal Palace with a thumping 3-0 win at Villa Park. El-Ghazi got robbed of an inform last week when he scored twice and even though he just got one goal in this game i expect him to get the inform due to the lack of options from the premier league.

Bukayo Saka RM - FC Arsenal - 75 -> 81 Rated: Arsenal arrested their dreadful Premier League form with a huge and impressive 3-1 win over London rivals Chelsea. Saka was crucial for his side, won the free-kick Xhaka managed to convert successfully and scored a longe range goal. Sky awarded him with an 9/10 and MOTM and i would be surprised if he didn't get in.

Boulaye Dia ST - Stade de Reims - 79 -> 82 Rated: Bordeaux faced Stade de Reims mid-week in Ligue 1 and Reims came away with a 3-1 victory. Boulaye Dia got himself a goal and an assist and it seems like he's picking up his second inform on Wednesday after that.

H. Rodallega ST - Denizlispor - 75 -> 81 Rated: One of a few players who scored a brace is Hugo Rodallega from Denizlispor. Their game against Erzurum BB ended in a 2-1 win for the away side and it should be enough for Rodallega to pick up the inform.

Micha Helik CB – Barnsley - 69 -> 79 Rated: This should be an easier one to pick. Barnsley recorded a 2-1 win over Huddersfield with Helik scoring both goals from the CB position.

T. Kadewere RW - Lyon - 74 -> 80 Rated: Olympique Lyonnais will spend the short winter break on top of the Ligue 1 table on goal difference after beating FC Nantes 3-0 on Wednesday. Tino Kadewere continued his fine form in front the goal by doubling Lyon's lead and assisting the third. L'Equipe awarded him with a 8 and MOTM and hopefully he will finally get the deserved inform on Wednesday.

Sergi Canos LW - Brentford - 70 -> 78 Rated: Tottenham Hotspur's next cup opponent Brentford came from behind to take all three points on Boxing Day against Cardiff City. Sergi Canos scored a second-half hat-trick and therefore should definetly get the inform on Wednesday.

Wadji ST – FK Haugesund - 63 -> 73 Rated: The Norwegian league provided a few informs over the last couple of weeks due to the unbelievable run of Bodo/Glimt but this time the inform could come from a mid-table team. Haugesund recorded a 3-1 away win on the final matchday of the season against Kristiansund BK and Wadji scored all three of them.

Bryan Linssen ST - Feyenoord - 74 -> 80 Rated: Bryan Linssen was the big man at Feyenoord on Wednesday evening. Feyenoord faced SC Heerenveen on the final matchday of 2020 and came away with a 3-0 win, Bryan Linssen scored all three goals and got named POTW which should be enough for him to pick up an inform.