FIFA 21 Team of the Week 13 Predictions

Published on by Simpleblue 18 Comments 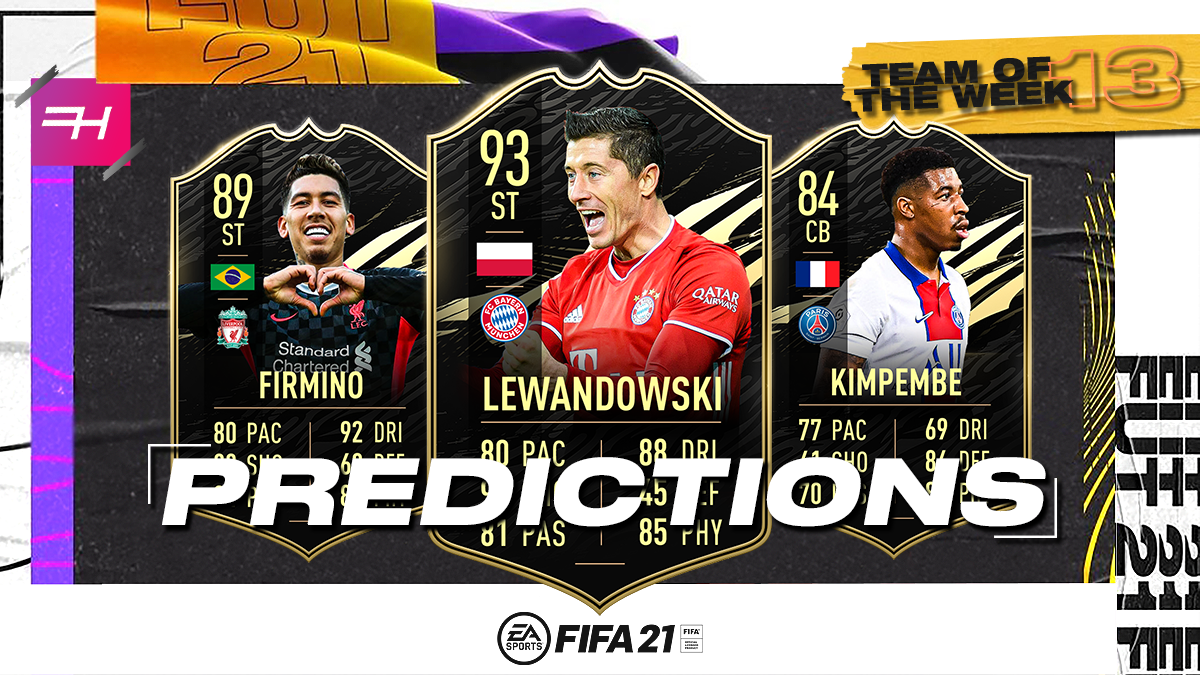 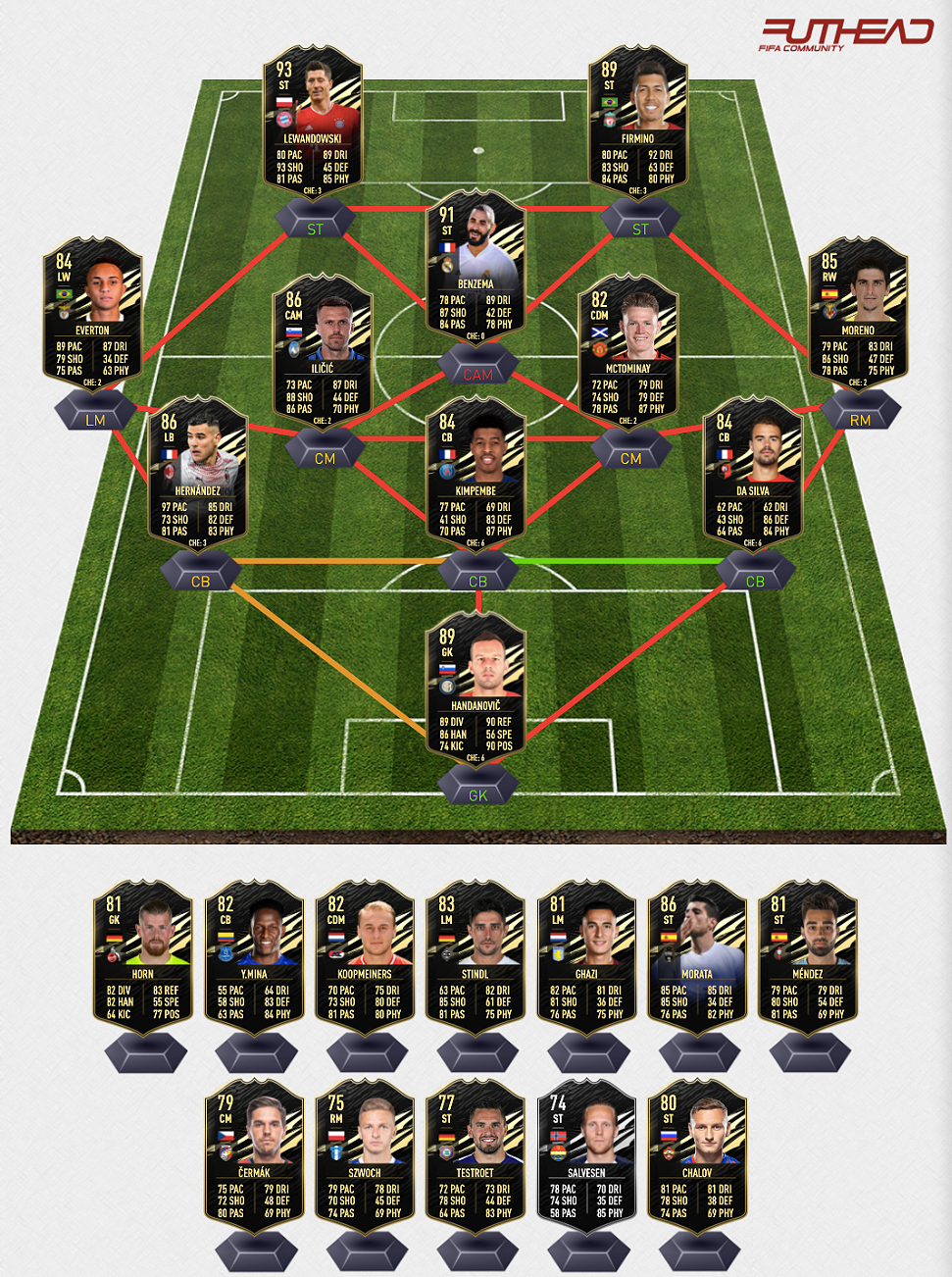 S. Handanovic GK - Inter Milan - 88 -> 89 Rated: Usually i woulnd't include a keeper with only 3 saves but it's quality over quantity this time. Inter faced Napoli in a mid-week fixture and Handanovic was the main reason Inter managed to win this close game 1-0. He produced a couple of world-class saves and Gazzetta awarded him with an 8/10.

T. Hernandez LB - AC Milan - 85 -> 86 Rated: AC Milan bounced back from two consecutive draws with a 2-1 win away at Sassuolo. He did what he does best – attack the opposition from the left flank. The Frenchman could have scored himself but unselfishly squared it to Saelemaekers after a bursting run. Gazzetta awarded him with a 7.5 for his performance which could result in another special card for him on Wednesday.

P. Kimpembe CB - Paris SG - 81 -> 84 Rated: Paris Saint-Germain and Lille played out a goalless draw at the Stade Pierre Mauroy on Sunday which put Lille back to the topl of the table on goal difference. Kimpembe was one of a few who stood out defensively. He did his best to get the ball out cleanly and was very present in the duels. He sacrificed himself for his team, perfect example at the end of the match where he released an incredible tackle to save his side and secure a point. L'Equipe awarded him with an 8 and we could see him pick up an inform on Wednesday, the other defensive option could be Marquinhos.

Da Silva CB - Stade Rennais - 81 -> 84 Rated: Not at the party in recent weeks, the Breton captain has resumed colors in Rennes' 3-0 victory against Lorient. In addition to successfully opening the scoring, the central defender largely held his position in the game with good interventions that made it possible to annihilate the rare attacks from Lorient.

McTominay CDM - Manchester United - 79 -> 82 Rated: Manchester United played host to bitter rivals Leeds United on Sunday afternoon and it did not disappoint, Manchester United walked away with a 6-2 win. McTominay showed a brilliant performance on and off the ball, scoring two goals and assisting another one from the CDM position which got awarded with a 9/10 and MOTM.

Josip Ilicic CAM - Atalanta Bergamo - 84 -> 86 Rated: Atalanta fought back from behind to send Roma back to the capital empty-handed as La Dea picked up a big 4-1 win in Bergamo on Sunday evening. Roma were up 1-0 at half-time, but the substitution of Ilicic at half-time completly changed the game thanks to a goal and two assists from him which got awarded with a huge 8.5 and POTW from Gazzetta.

G. Moreno RW - FC Villareal - 83 -> 85 Rated: It seemed like Villareal taken the foot off the gas in the league after the last four games ended in a draw but they beat Osasuna 3-1 away and got back to winning ways thanks to a Gerard Moreno brace on Saturday. Marca awarded him with a perfect 3/3 match rating, sadly it would be a position change from ST to RW.

Everton LM - Benfica - 81 -> 84 Rated: Benfica faced Gil Vicente on Sunday at the Estadio Cidade de Barcelos and went home with a 2-0 victory. The Brazil winger Everton scored the second goal of the game and could also have scored the first if his attempt wouldn't have been deflected by a defender and therefore counted as an own goal.

Karim Benzema ST- Real Madrid - 90 -> 91 Rated: Real Madrid pulled level on points with neighbourhood rivals Atletico at the top of La Liga after beating Eibar 3-1. One goal, two assists and another top notch performance from Real's forward got awarded with 3/3 stars from Marca again after he already got the same match rating after Tuesday's brace against Athletic Bilbao.

R. Lewandowski ST - FC Bayern - 92 -> 93 Rated: German champions Bayern Munich came away with a vital 2-1 win in the dying moments in their top-of-the-table clash against Bayer Leverkusen. It was a somewhat quiet performance by the Bayern striker's standarts, but yet the newly crowned The Best FIFA Men's Player did manage to get on the scoresheet twice, sealing all three points for his side. He also scored both goals in Bayern 2-1 win against Wolfsburg mid-week.

Roberto Firmino ST - FC Liverpool - 88 -> 89 Rated: Liverpool flexed their muscles as they dispatched Crystal Palace to the tune of 7-0, a day where Jurgen Klopp‘s men shone on a record-breaking afternoon. The Brazilian striker took his goal excellently, with a perfect first touch followed up by a fine outside of the foot finish. He took his second in similar clinical fashion, clipping it over Guaita. He also scored the winning goal mid-week against Tottenham, a huge 9/10 and MOTM from both games should be enough for him to pick up his second inform.

Timo Horn GK - Cologne - 77 -> 81 Rated: Leipzig had won all nine of their competitive home games in 2020/21 but their 100 per cent home record was ended after they were held to a goalles draw by Cologne. One of the reason for the draw was Cologne's keeper Timo Horn who made a total of 6 saves to deny Leipzig from scoring. Kicker awarded him with a 2 and MOTM which could be enough for him to get in.

Yerry Mina CB - FC Everton -78 -> 82 Rated: Everton added more misery to a dysfunctional Arsenal side as the Toffees emerged as victors at Goodison Park thanks to Yerry Mina's touring header that proved to be the winner of the game. He was resolute and not allowing either Arsenal strikers any space or opportunity. Yet another solid performance from the Colombian international which should finally get awarded with an inform.

Koopmeiners CDM - AZ Alkmaar - 78 -> 82 Rated: I'm surprised that this isn't the second or third inform already for Koopmeiners, hopefully he'll receive his first one this week. Koopmeiners once again showed a brilliant performance in Alkmaar's 5-3 win against Willem II with scoring a brace and assisting one and was named POTW.

Lars Stindl LM - Mönchengladbach - 80 -> 83 Rated: It was kind of a spectacular game mid-week between hosts Eintracht Frankfurt and Mönchengladbach which endet in a 3-3 draw due to a late hat-trick of Lars Stindl to secure at least one point after being down to ten men. Kicker awarded him with a perfect 1 and POTW.

El-Ghazi LM - Aston Villa - 75 -> 81 Rated: Aston Villa faced West Brom with their new manager Allardyce and things haven't changed for West Brom as Aston Villa came away with a 3-0 away win. El Ghazi scored a brace and got awarded MOTM which makes it likely he'll pick up his first inform on Wednesday.

Alvaro Morata ST - Piemonte Calcio - 84 -> 86 Rated: uventus faced Parma and after last weeks draw against Atalanta there was a bit of pressure on Juventus. The former Real Madrid striker had to put up a strong performance to make up for the mess he created against Atalanta. Assisted the first of Ronaldo's goals with a stunning cross, and put his name on the score sheet with a well-taken standing header. Gazzetta awarded him with a 8 and considering Ronaldo just got his inform 3 weeks ago Morata is more likely to get the inform from this game.

B. Mendez ST - Celta Vigo - 75 -> 81 Rated: Celta Vigo faced Deportivo Alaves on Sunday and picked up all three points after their 2-0 home win. Vigo's forward Mendez scored both goals and Marca awarded him with 3/3 stars, a perfect match rating.

Ales Cermak CM – Viktoria Plzen - 73 -> 79 Rated: One of the higher end results this week where Plzen won their fixture against Teplice with 7-0. Midfielder Ales Cermak got himself a hat-trick from CM which should result in an inform.

M. Szwoch ST – Wisla Plock - 65 -> 75 Rated: Usually Reserves are full of hat-tricks of goal but this one is a hat-rick of assists. Szwoch assisted three of the four goals in his side's 4-1 win against Bielsko-Biala.

P. Testroet ST - Aue - 69 -> 77 Rated: This one isn't coming from a hat-rick performance but still worth an inform. Aue recorded a 4-1 home win against Karlsruher SC and Testroet was involved in all goals with scoring two and assisting the other two. Kicker awarded him with a perfect 1 and POTW.

Salvesen ST - Stromsgodset - 64 -> 74 Rated: The Norwegian league was a solid option the past weeks when it comes to candidates for informs and it's the same again this week. Stromsgodset won their fixture against Odds BK 3-1 and Salvesen scored all three goals, an important win for his side considering both clubs are heavily involved in the relegation battle.

Fedor Chalov ST - CSKA Moscow - 74 -> 80 Rated: We haven't seen a lot of informs from the russian league in previous weeks but three goals for CSKA's forward Chalov in their 3-1 away win against Rostov should usually be enough for him to make it this week.