FIFA 21 Team of the Week 12 Predictions

Published on by Simpleblue 30 Comments 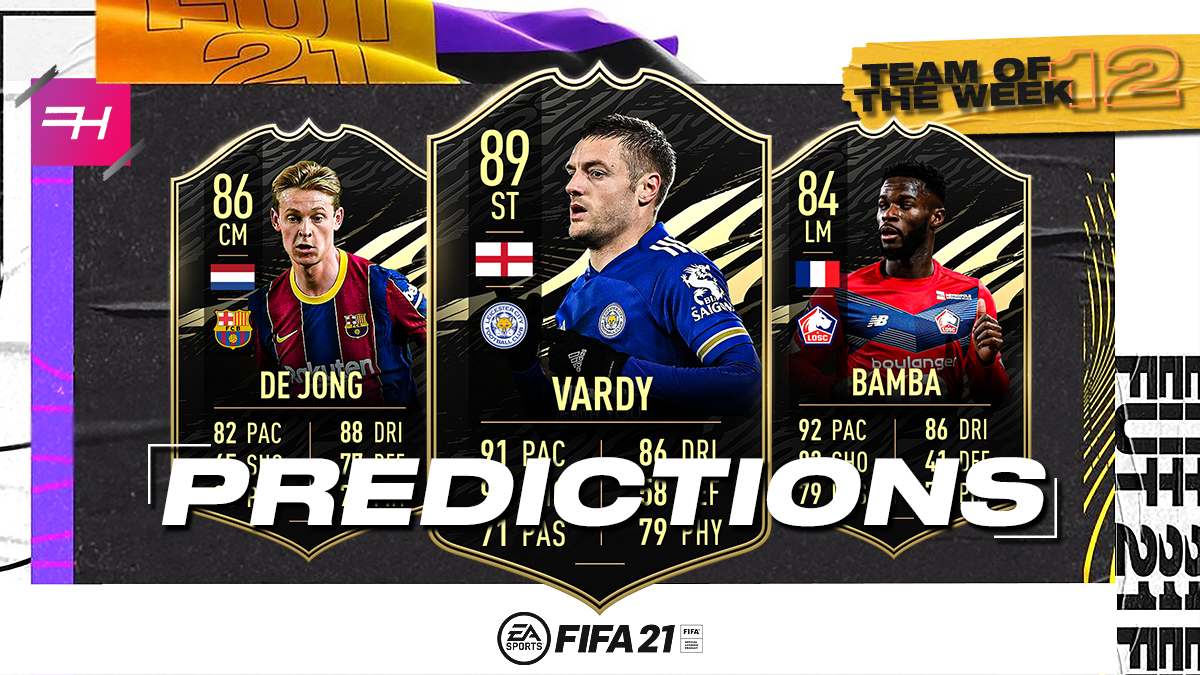 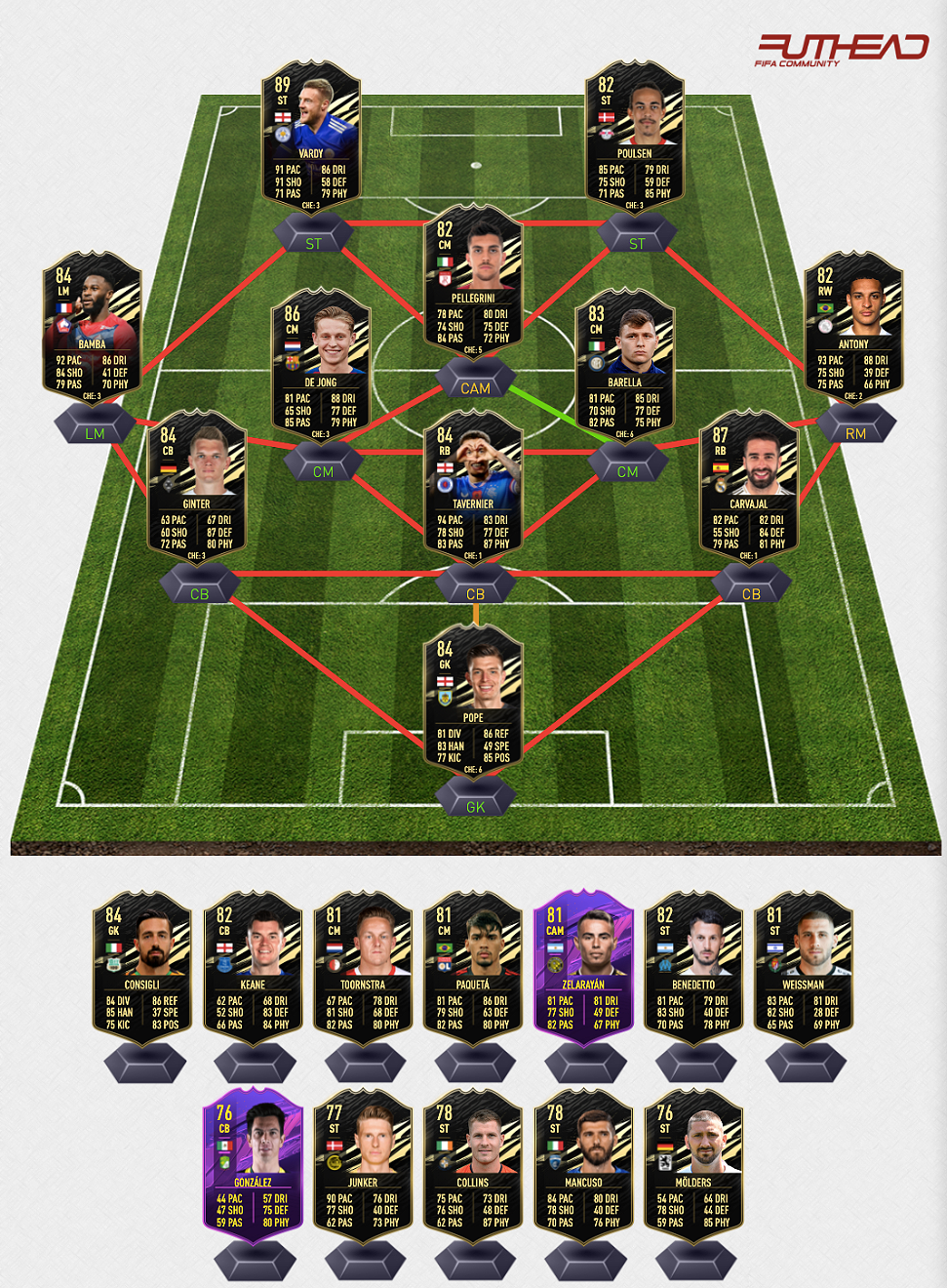 Nick Pope GK - Burnley - 82 -> 84 Rated: We have a good amount of Premier League keepers this week who are possible to get an inform but with Nick Pope making 6 saves in a 1-0 win against Arsenal London and a match rating of 9/10 plus MOTM i think he's the more likely option this week.

Daniel Carvajal RB - Real Madrid - 86 -> 87 Rated: Real Madrid can claim bragging rigthts in the Spanish capital for the next few weeks after a convincing 2-0 win over rivals Atletico Madrid. Carvajal returned after an injury layoff and Madrid's attacking thread came from his side but defended diligently when called upon. A superb strike came off the upright and even if it was an own goal from Oblak it doubled Madrid's lead on the night. Marca awarded him with a perfect 3/3 match rating which could be enough for him to pick up his first inform.

Matthias Ginter CB - Mönchengladbach - 82 -> 84 Rated: Bundesliga options are quite rare this week and i don't think we will see more than 2 informs coming from this league. One of them could be Gladbach's defender Matthias Ginter who got MOTM in his side's 1-1 draw against Hertha BSC. This and the fact he got awarded MOTM from Kicker makes me believe he could ge in this week.

James Tavernier RB - Glasgow Rangers - 81 -> 84 Rated: Tavernier got kind of robbed last week so I'm happy to include him once again this week and hopefully the gap is enough this time. Glasgow beat Dundee United 2-1 and James Tavernier got himself a goal and an assist which as said, should be enought his week for him to pick up the second inform.

De Jong CM - FC Barcelona - 85 -> 86 Rated: Frenkie de Jong has often been criticised for his underwhelming performances at Barcelona but seemed close to his best in Barcelona's 1-0 win over UD Levante. The Dutch midfielder burst into the final third with several exfellent runs and bagged a well-deserved assist with a precise pass to Messi. Marca awarded him with 2/3 stars which could be enough this week for him to get his first inform due to the lack of higher rated midfielders.

Nicolo Barella CM - Inter Milan - 80 -> 83 Rated: Inter took their 4th win in the Serie A away against Cagliari after yet again coming from a goal behind to win 3-1. Nicolo Barella was full of energy, fought a hard battle with Rog all match and was a driving force scoring and assisting D'Ambrosio.

Lorenzo Pellegrini CAM - AS Roma - 79 -> 82 Rated: Roma finally managed to get back on winning ways after a convincing 5-1 away win against Bologna. One of the options from this game is Pellegrini who got himself a goal and an assist which could be enough for him this week to pick up an inform.

Jonathan Bamba LM - Lille - 82 -> 84 Rated: Jonathan Bamba is probably one of the best players so far in Ligue 1 and he has shown again why in Lille's 2-1 victory against Bordeaux on Sunday evening. He got himself a goal and an assist with José Fonte which put Lille joint top with Lyon. L'Equipe awarded him with a 8/10 which usually is enough to pick up an inform.

Antony RW - Ajax Amsterdam - 78 -> 82 Rated: Another week and another easy win for Ajax Amsterdam with a 4-0 home win against PEC Zwolle. Antony got himself a goal and two assists in this game and got awarded with a 8/10 from Vl.

Yussuf Poulsen ST - RB Leipzig - 78 -> 82 Rated: As I've mentioned already, options from Bundesliga are quite rare this week and especially for gold strikers. One option is Poulsen who got MOTM in Leipzig's 2-0 home win against Werder Bremen where he got both assists.

Jamie Vardy ST - Leicester City - 88 -> 89 Rated: Most people now will ask for Jamed Maddison, fair. But with Maddison just recently being featured in the TOTGS Promo i don't think they will give him another special card straight after. The next best option from Leicester's 3-0 win against Brighton is Jamie Vardy who scored one and also got two assist.

Andrea Consigli GK - Sassuolo - 81 -> 84 Rated: I've predicted Consigli a few times already to get an inform but he never got it. This week he should definetly be in after he made 4 crucial saves in Sassuolo's 1-0 win against Benevento. The fact that Sassuolo was down to 10 mean early in the second half is also a big part plus Gazzetta awarded him with a 8/10.

Michael Keane CB - FC Everton -78 -> 82 Rated: FC Everton just ended Chelsea's 17-macth unbeaten run in all competitions with a 1-0 home win. Keane aided Mina in keeping Giroud at bay and cutting down balls that were aimed at the frenchman. Keane looked reassuring at the back as always and was once again a very reliable outlet for passing and distribution. One of those performances where nothing went wrong which got awarded with a huge 9/10 and MOTM from Sky.

Toornstra CM - Feyenoord - 75 -> 81 Rated: The Dutch midfielder scored a brace in Feyenoord's 3-0 win against VVV-Venlo and got awarded with an 8/10 and Player of the Week from Vl which should be enough for him to pick up his first inform.

Lucas Paqueta CM - Lyon - 76 -> 81 Rated: Lyon scored a big success in the Ligue 1 title race as they claimed a 1-0 win over PSG. Although the golden goal came from Kadewere but with Paqueta being named MOTM for his overall performance it's hard to not inlude him.

Zelarayan ST - Columbus Crew - 76 -> 81 Rated: Columbus Crew beat the defending champion Seattle Sounders 3-0 with a brace and an assist of Zelarayan to secure the club's second MLS Cup title on Saturday night in the final match. This should result in a hero card for the Argentinian midfielder.

D. Benedetto ST - Marseille - 79 -> 82 Rated: Olympique Marseille made it six Ligue 1 wins in a row now on Saturday after their 2-1 victory against AS Monaco. Two players stood out with Thauvin and Benedetto both scoring and assisting one but with Benedetto being named MOTM and included in L'Equipes TOTW i've decided to go with him.

Weissman ST - Real Valladolid - 75 -> 81 Rated: Valladolid picked up all three points in their 3-2 win against Osasuna where the Israeli striker got himself two goals.

I. Gonzales CB - Club Leon - 67 -> 76 Rated: There are an huge amount of hat-tricks this week when it comes to silver players and therefore Gonzales could easily miss out but the reason i'm including him is that we've always seen informs from the Liga MX finals in the past Fifa's. After a 1-1 draw in the first leg Club Leon secured the title with a 2-0 home win in the second leg. Gonzales wasn't the official MOTM but the fact Club Leon kept clean sheets in all of their playoff home games makes me believe there is a chance for Gonzales.

Kasper Junker ST - Bodo/Glimt - 69 -> 77 Rated: Bodo/Glimt is still walking through the league without competition. Again they've won their away game 4-0 against Haugesund and Kasper Junker managed to score a hat-trick which should be enough for him to pick up the inform.

L. Mancuso ST - Empoli - 70 -> 78 Rated: This is probably the only player who is secured to get the inform this week. Leo Mancuso not just got a hat-trick, he managed to score 4 goals in Empoli's 5-2 win over Entella.

S. Mölders ST - 1860 Munich - 66 -> 76 Rated: There have been two players this week with a hat-trick in Bundesliga 3 and both of them could be in but i've decided to go with Sascha Mölders who got a hat-rick in Munich's 5-0 win against Walfhof Mannheim.