FIFA 21 Team of the Week 10 Predictions 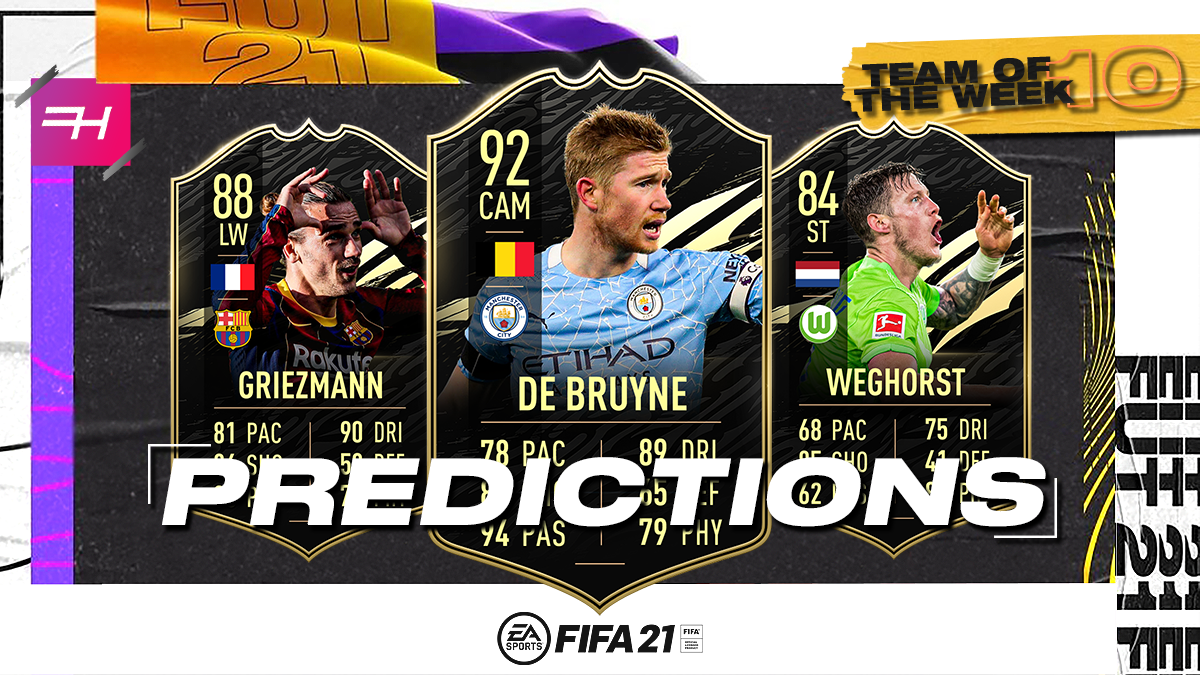 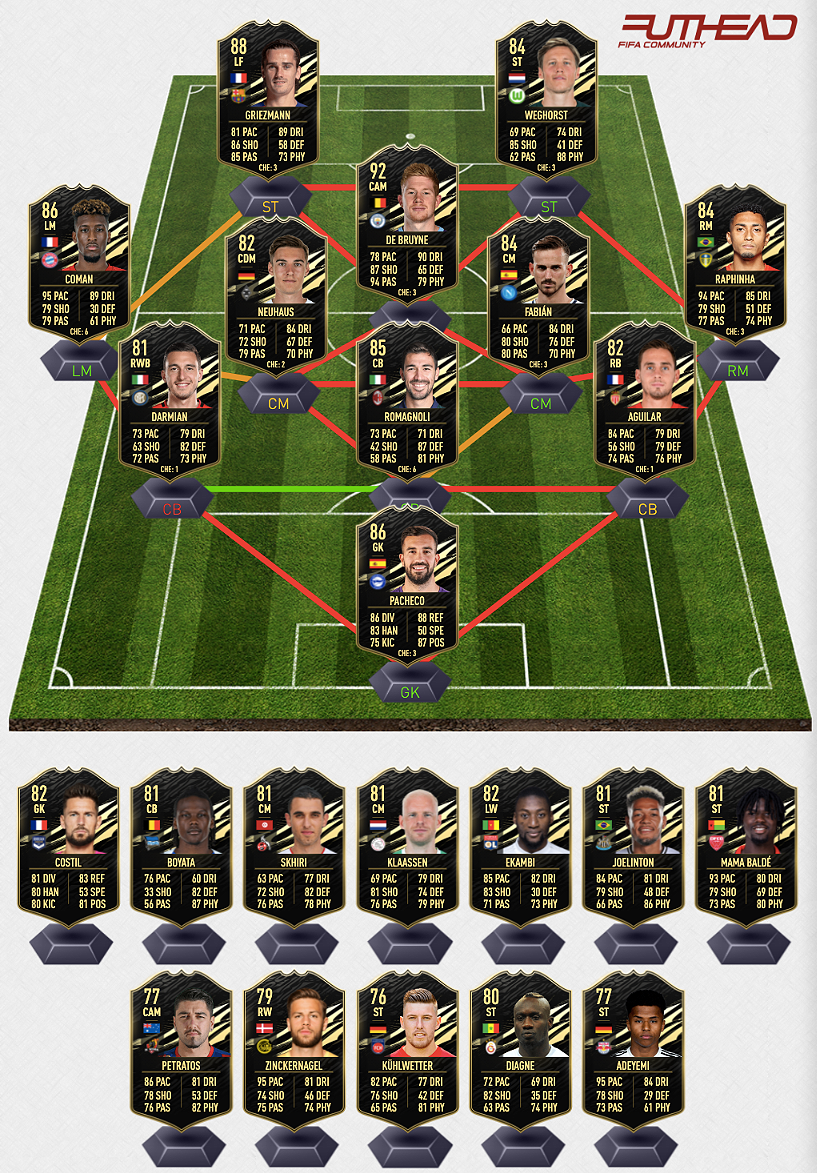 Fernando Pacheco GK - Alaves - 84 -> 86 Rated: Real Madrid were stunned at home as Alaves claimed all three points in a late Saturday night kick-off. It was Alaves' first win at the Santiago Bernabeu since May 2000 and Pacheco was crucial for his side in this game. He made a total of 7 saves do deny Madrid from scoring and got awarded with 3/3 stars from Marca.

Ruben Aguilar RB - AS Monaco - 78 -> 82 Rated: AS Monaco won their Sunday fixture against Nimes 3-0 with now being unbeaten the fourth game in a row, their best run since the 2016/2017 season. Although Volland got a goal and an assist i've gone with Fullback Ruben Aguilar who got himself an assist and kept a clean sheet in this game which, due to the lack of defenders this week, should be enough for him to get in TOTW.

Romagnoli CB - AC Milan - 83 -> 85 Rated: Milan continued their good run of form with a 2-0 win against Fiorentina. After some criticism lately, the Milan captain responded in the best possible way with an imposing performance at the back, stopping almost every attack. He crowned his display with a nice header to give Milan the lead.

Matteo Darmian RWB - Inter Milan - 76 -> 81 Rated: Coming on the back of a disappointing defeat to Real Madrid in the UCL, the pressuere was firmly on Inter Milan going up against a Sassuolo side that was unbeaten this Season. Handed a start at RWB ahead of Hakimi, the former Manchester United man made the most of his opportunity. Given the unenviable task of keeping Boga quiet, Darmian did so with great effect, hardly letting the winger past him. With also providing an assist it was a solid defensive display which could see him pick up an inform this week.

Fabián CM - Napoli - 82 -> 84 Rated: A dominant Napoli side recorded a convincing 4-0 over Roma which allowed the Partenopei to move up to joint fourth place with Juventus and Roma on 17 points. The Spanish international had more freedom to roam forward against Roma, thanks to the presence of Zielinski, and took advantage of it with a well-placed shot for the second goal of the game. As Insigne can't get the inform and I'm quite sure there will be one coming from this game, I'm happy to include Fabian.

Florian Neuhaus CDM - Mönchengladbach - 79 -> 82 Rated: Borussia Mönchengladbach scored twice in each half to crush visitors Schalke 4-1 on Saturday and pile more misery on the Royal Blues as their winless run in the league stretched to 25 successive matches. Florian Neuhaus got himself a goal and an assist from the CDM position and was important in Gladbach's victory which got awarded with a 1.5 from Kicker.

De Bruyne CAM - Man City - 91 -> 92 Rated: Manchester City beat Burnley 5-0 at the Etihad Stadium on Saturday afternoon, a comfortable victory for Guardiolo's side. A lot of people are going to expect Mahrez getting the inform for that game which is understandable considering he scored a hat-trick but with him just being in TOTW8 I doubt he'll get in as we have seen other players not getting in in the past with a gap of 2 weeks. Therefore I'm going with De Bruyne who was the centre of most of City's excellent attacking play and got himself two assist, the other option for this game would be Mendy with one goal.

K. Coman LM - FC Bayern - 84 -> 86 Rated: Bayern Munich returned to winning ways after securing an emphatic 3-1 victory over an inspired Stuttgart. It was another superb performance from Kingsley Coman who brought Bayern on level terms with a nonchalant finish by cutting onto his right to unleash a powerful low drive beyond Kobel to score in his third straight match and he also provided an assist for Lewandowski. A clean performance and a 1.5 from Kicker, surely enough for him to pick up the inform.

Raphinha RM - Leeds Utd. - 81 -> 84 Rated: Hard to choose a player from a game which could have easily ended in a 8-8 draw. Raphinha had a lively start with an early chance and set up a fantastic chance for harrison. He got the only goal with a great strike from 20 yards out to beat Pickford. Was a threat every time he got the ball, worked back when necessary and got awarded with a 8/10 which could result in his first inform.

A. Griezmann LW - FC Barcelona - 87 -> 88 Rated: Barcelona cruised to an emphatic 4-0 win over Osasuna to move up to seventh in the table. It was a lively performance from the World Cup winner, who was involved in almost everything positive Barcelona conjured up on the day. Created a chance for Coutinho early on, while he forced Herrera into action a couple of times before unleashing a fantastic strike to make it 2-0. He also got the assist for Coutinho's third goal. It seems like he's slowly getting back to his best and picked up 3/3 stars from Marca.

Weghorst ST - VFL Wolfsburg - 81 -> 84 Rated: The opening match in the Bundesliga of Matchday 9 between Wolfsburg and Bremen endet in a eight-goal-thriller and Wolfsburg extended their unbeaten start to the season to nine matches. The dutch striker Wout Weghorst grabbed a brace and got awarded with a 1.5 from Kicker which could be enough for him to grab an inform this week.

Costil GK - Bordeaux - 79 -> 82 Rated: There are quite a few options for the second goalkeeper this week. For the second time in a row Paris dropped points in the league, this week their game against Bordeaux ended in a 2-2 draw. It was a wild game in the second half and one of the reasons Bordeaux managed to secure a point was their goalkeeper Costil who made a total of 7 saves and got awarded with a 8 from L'Equipe which should be enough for an inform.

Boyata CB - Hertha BSC - 77 -> 81 Rated: Hertha BSC drew 0-0 with Leverkusen on Sunday afternoon. It was a solid defensive performance to keep a second consecutive clean sheet away from where where Dedryck Boyata was a rock. This is definetly a pick you won't see in many Predictions but due to the lack of defender options this week and a 1.5 match rating for Boyata I can see him sneaking in.

Skhiri CM - Cologne - 77 -> 81 Rated: It was always likely to take something special to bring a welcome end to an 18-game winless run and Ellyes Skhiri delivered just that as Cologne beat Borussia Dortmund to savour victory again after a historic abstinence. Skhiri stunned Dortmund with an early goal when he tapped in at the far post in the ninth minute and scored an identical goal from yet another corner on the hour to make it 2-0. Despite conceding from Hazard Cologne managed to stop Dortmund from scoring the equaliser. A 1.5 from Kicker and Man of the Match should definetly be enough for him to pick up an inform.

Klaassen CM - Ajax - 77 -> 81 Rated: Ajax keeps marching ahead in the Eredivisie. They've won the away match against FC Emmen easily with 5-0 and it looks like Davy Klaassen can keep his recent form. He once again put in a solid performance with a goal and an assist which could result in his first inform for Ajax on Wednesday.

Toko Ekambi LW - Lyon - 78 -> 82 Rated: In-form Olympique Lyonnais were 3-0 home winners against Reims and went third in the table now. The Cammeroonian international Toko Ekambi, who was supsended against his former club Angers, returned to the squad with a bang scoring one, setting two up and hitting the post. He kept running hard, stretched the Reims defence all match long and picked up a 8 from L'Equipe.

Mama Baldé ST - Dijon - 75 -> 81 Rated: Bottom table Dijon shocked Nice for the first win of the Season with winning 3-1. Mama Baldé scored a brace, picked up an 8/10 from L'Equipe and was the most important player for Dijon in their victory.

Joelinton ST - Newcastle - 75 -> 81 Rated: It wasn't an easy season so far for the brazil striker but it was a big night for him against Crystal Palace. Even though he should have buried one of those first half chances, he never gave up and responded to a few missed chances with a brilliant assist and a well deserved goal of his own.

Petratos CAM - Al-Wehda - 69 -> 77 Rated: The first of five hat-tricks and it's coming from the Saudi League. Al-Wehda won their fixture against Al-Batin with 3-2 and the offensive midfielder Petratos scored all goals for his side which should be enough for him to pick up an inform.

Zinckernagel RW - Bodo/Glimt - 72 -> 79 Rated: The new Norwegian Champion Bodo/Glimt is still unstoppable and dominating the league. They faced Rosenborg BK and steamrolled them 5-1. The outstanding player on the pitch was Zinckernagel who got himself a goal & three assists from RW, picked up the highest match rating this week and should definetly get his inform for this performance.

Kühlwetter ST - FC Heidenheim - 66 -> 76 Rated: He seems unstoppable at the moment. After his double in Kiel, the 24-year-old now got a hat-trick against Hamburg and defeated them single-handedly. Another goal got disallowed because of an offside position but he deservedly picked up POTW in Bundesliga 2 and should not miss out this week.

Diagne ST - Galatasaray - 74 -> 80 Rated: After a disappointing draw last weekend Galatsaray run riot against Rizespor. In absence of Galatasaray's main forward Falcao it was on Mbaye Diagne to be the decisive player on the pitch with scoring a hat-trick in their 4-0 win.

Adeyemi ST - RB Salzburg - 69 -> 77 Rated: After four consecutive games without a winRB Salzburg came back with a bang! They've steamrolled St. Pölten with 8-2 in their away game on Saturday and one of the biggest talents has been involved in four of the eight goals. Karim Adeyemi only got one goal but also got a hat-trick of assists which should definetly be enough for an inform.