FIFA 21 Team of the Week 8 Predictions 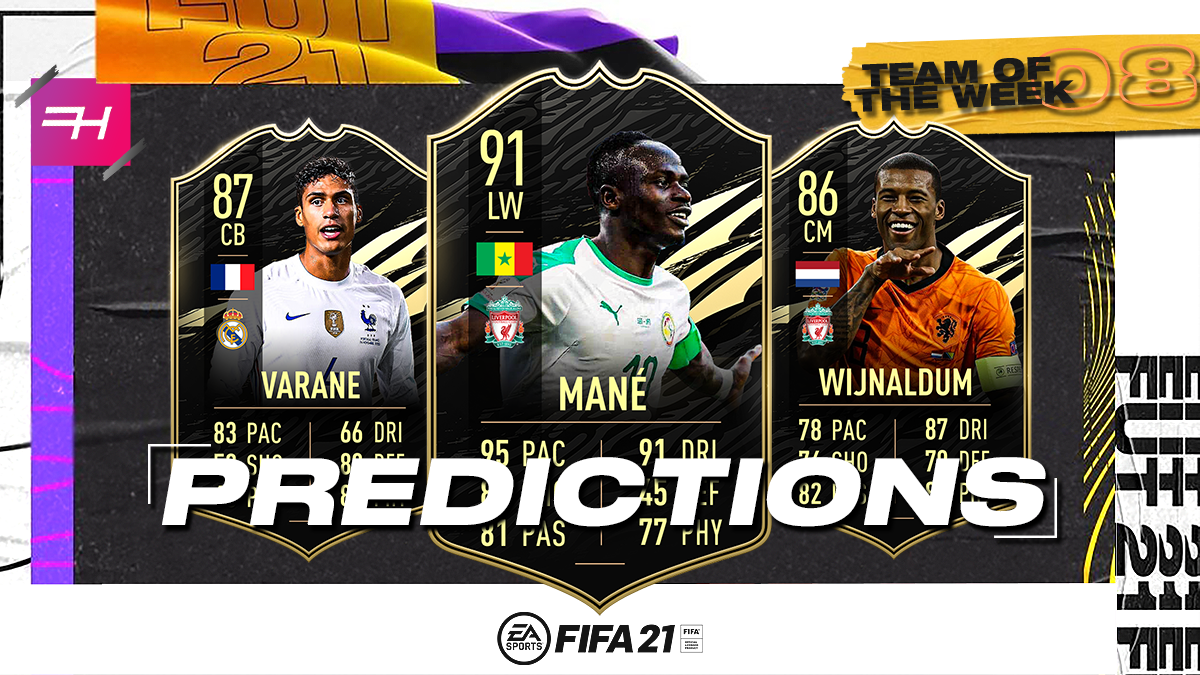 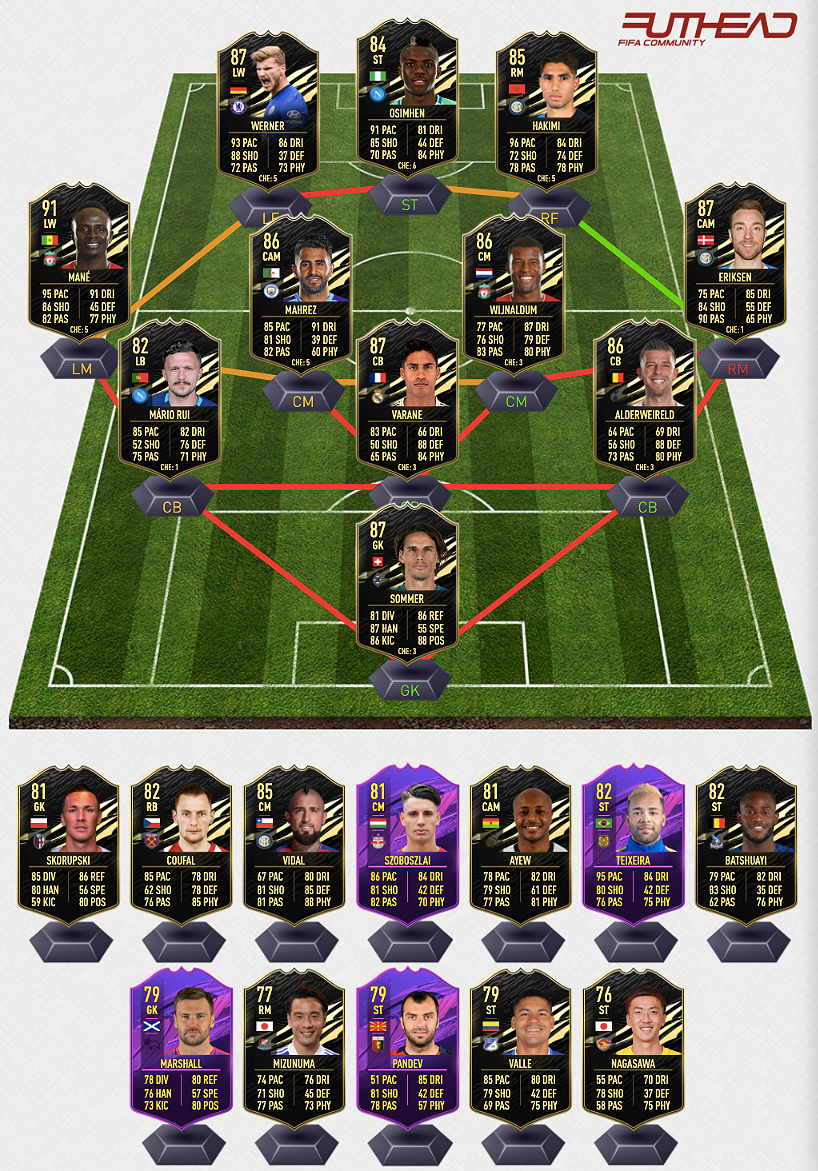 Yann Sommer GK - Mönchengladbach - 86 -> 87 Rated: For the second week in a row the starting Goalkeeper should be an easy pick and a lock. It was kind of a crazy Game in the Nations League between Switzerland and Spain where Spain could have taken an advantage with a win ahead of their clash against Germany next week. But surprisingly Switzerland managed to draw the game and the only reason was Gladbach's Goalkeeper Sommer who saved two Penalties from Ramos and also made a total of 6 saves.

Alderweireld CB - Tottenham - 85 -> 86 Rated: Belgium beat England 2-0 and although Alderweireld wasn't named MOTM in that game I give it a go with the lack of options for defenders this week and for the fact that he was still awarded with a 8/10 from Sky which could be enough for him to pick up an inform.

Raphael Varane CB - Real Madrid - 86 -> 87 Rated: This is a risky inclusion and most likely one a lot of people are worried about. France beat Portugal 1-0 and the only goal came from Chelsea's midfielder Kanté who is likely to get the inform for it. But as I said earlier, there's a lack of options for defenders this week and we also have a lot of options for midfielders. Varane also got a 8 from L'Equipe which is pretty good and which could be enough for him this week to make it.

Mario Rui LB - Napoli - 79 -> 82 Rated: This one comes from Portugal's friendly match against Andorra where Portugal crushed them 7-0. Rui was one of the standout performers of the match. The Napoli wing-back bagged himself a brace of assists and also created 8 chances throughout the game which could result in his first inform this Fifa.

Wijnaldum CM - FC Liverpool - 85 -> 86 Rated: As said before, there are quite a few options for midfielders this week and one of the is Wijnaldum. The Netherlands captain led from the front, netting twice inside the opening 15 minutes to put his side comfortably ahaed. Dumfries got 2 assists in that game too so it's possible that he could get it but i've decided to go with Liverpools Midfielder.

Christian Eriksen CAM - Inter Milan - 86 -> 87 Rated: Denmark snatched all three points from Iceland with a tight 2-1 victory on Sunday night. Eriksen scored both goals from the penalty spot and could have had a hattrick but his attempt was saved by Iceland's Goalkeeper. Although both goals were from the penalty spot it should be enough for him to make it.

Riyad Mahrez CAM - Man City - 85 -> 86 Rated: Algeria cemented top spot in Group H of the 2022 Africa Cup of Nations qualifiers with a 3-1 victory over Zimbabwe in Thursday. Once again Riyad Mahrez was crucial for the national team being the decisive passer for Feghouli and scorer on a superb inspiration reminding everyone why he is the offensive leader of this team.

Achraf Hakimi RM - Inter Milan - 83 -> 85 Rated: The Moroccan national team curshed it's guests Central Africa 4-1 in the qualifiers for the 2021 African Nations Cup and are now leading Groupe E alone. Man of the Match was Chelsea's midfielder Hakim Ziyech but as he just recenetly got his first inform in TOTW6 i've gone Achraf Hakimi who got himself a goal and an assist in that match.

Sadio Mané LW - FC Liverpool - 90 -> 91 Rated: This could be the headliner this week. Mané was the decisive player in both matches against Guinea -Bissau with scoring and assisting in the first game and then scoring the only goal in the second to send his team through to the Africa Cup of Nations finals.

Timo Werner LW - FC Chelsea - 86 -> 87 Rated: There are two options from the game between Germany and Ukraine where Germany went a way with a 3-1 win. After being 0-1 down Germany completed their Comeback where Werner scored each side of the break to help his side to a 3-1 win over Ukraine and moved top of their Nations League Group. His performance got awarded with a 2 and MOTM from Kicker which could let him pick up his second inform but with a position change to LW.

Victor Osimhen ST - Napoli - 82 -> 84 Rated: It was a crazy game in Group L of the 2022 Africa Cup of Nations qualifiers where Nigeria surrendered a four-goal lead to draw 4-4 against Sierra Leone. Altough the game ended in a draw we could probably see Osimhen picking up his second IF. He netted on his return to the Nigeria fold, assisted one and could have scored another but missed a header from close range. Unfortunately he was subbed of late in the second half due to a shoulder luxation.

Lukasz Skorupski GK - Bologna - 76 -> 81 Rated: The second goalkeeper this week is coming from Serie A and it's probably the only one who is available for this spot. Poland faced Ukraine in a friendly and went away with a 2-0 win, Bologna's goalkeeper made a total of 6 saves and therefore i can see him getting the inform with the limited options available.

Vladimir Coufal RB - West Ham - 78 -> 82 Rated: This is one of a not many options for defenders this week and it could be a really solid one. Coufal provided the assist for the only goal where his side beat Isreal 1-0. The other option would be Pekarik who also got an assist in Slovakia's 1-0 win against Scotland.

Arturo Vidal CM - Inter Milan - 83 -> 85 Rated: Peru didn't have the best start with a loss and a draw in the WC Qualification and had a bit of pressure in the „Clásico del Pacífico“ but guided by an inspired and timely Arturo Vidal, the Chilean team beat Peru 2-0. Vidal was crucial in this game with scoring both goals, one of them being a screamer from the middle distance.

Szoboszlai CM - RB Salzburg - 75 -> 81 Rated: This could be one of a few hero Cards in this TOTW and what a crazy comeback it was from Hungary. Playmaker Szoboszlai was key to Hungary's effort, whipping crosses and set pieces into the box and he almost put his side levels before the break but his shot was saved. He capped his superb performance by firing home in the second minute of added time to seal a stunning win and send his side through to the finals and therefore was awarded with the MOTM.

Andre Ayew CAM - Swansea City - 76 -> 81 Rated: Ghana made it three wins out of three games in the 2021 Africa Cup of Nations qualifiers after beating Sudan 2-0 on Thursday. Undisputed Man of the Match was Andre Ayew, the captain scored both goals in the game and was all over the pitch working tirelessly.

Alex Teixeira ST - Jiangsu Suning - 79 -> 82 Rated: Another Hero item could come from the final of the Chinese Super League. Teixeira scored the winner in a close 2-1 victory for his side against Guangzhou Evergrande to secure the Title. The other option from this game could be Eder but Teixeira is the more attractive one.

Batshuayi ST - Crystal Palace - 78 -> 82 Rated: It was a typical striker's performance from Batshuayi who was sharp throughout the course of the game. The striker also showed tremendous hold-up play and was alway on the lookout for spaces in the final third. His efforts were duly rewarded with two goals in Belgium's narrow 2-1 win over Switzerland which was a tough game for the home side.

David Marshall GK - Derby County - 72 -> 79 Rated: Scotland's agonising 23-years absence from major men's tournaments is finally over after an historic shootout victory over Serbia. Hardly anything to do for actual 90 and helpless for Jovic's leveller but then made a superb stop in first half of extra time to deny Gudeli from scoring and then became Scotland's penalty hero when he flung himself to his left to palm away Mitrobiv's effort.

Mizunuma RM - Yokohama F.M. - 69 -> 77 Rated: Not an hattrick of goals but also a superb performance from another japanese player. Mizunuma got himself a Goal and a hattrick of assists in their 6-2 victory against Urawa Red Diamonds which should be enough for him to get an inform.

Goran Pandev ST - Genoa - 72 -> 79 Rated: Hero Card Number four could came from the game between Georgia and North Macedonia. For the first time ever the away side qualified for a major tournament as they beat Georgia in a play-off to reach Euro 2020 and Macedonia's Hero was 37-year-old Goran Pandev who's winner cam 11 minutes into the second half to send his side into Group C next Summer with the Netherlands, Ukraine and Austria.

Del Valle ST - Millonarios FC - 72 -> 79 Rated: Another player who managed to get himself a hattrick was Del Valle. His side came away with a 6-1 win against Petrolera and with hattrick usually being enough for low rated players he should make it.

Nagasawa ST - Vegalta Sendai - 67 -> 76 Rated: We didn't have as much hattricks as previous weeks but Shun Nagasawa got the job done. He managed to get a hattrick in their 4-0 win against Gamba Osaka which is even more impressive with his side being bottom of the table and Gamba Osaka placed second in the League.