FIFA 21 Team of the Week 7 Predictions

Published on by Simpleblue 43 Comments 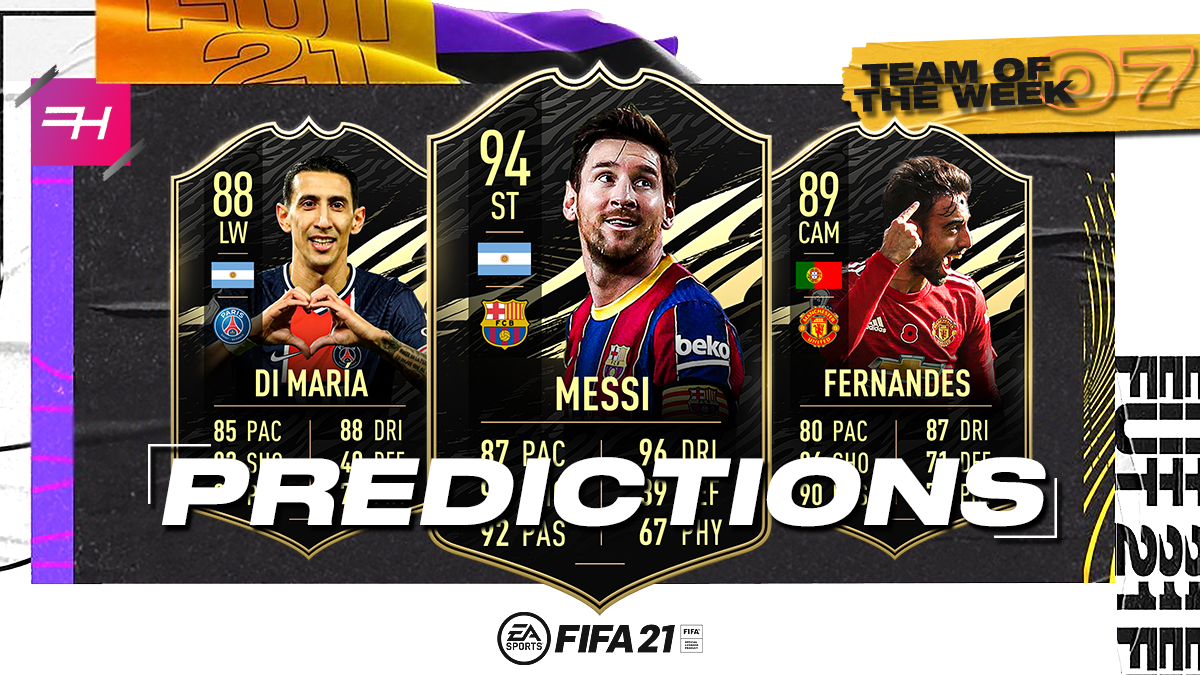 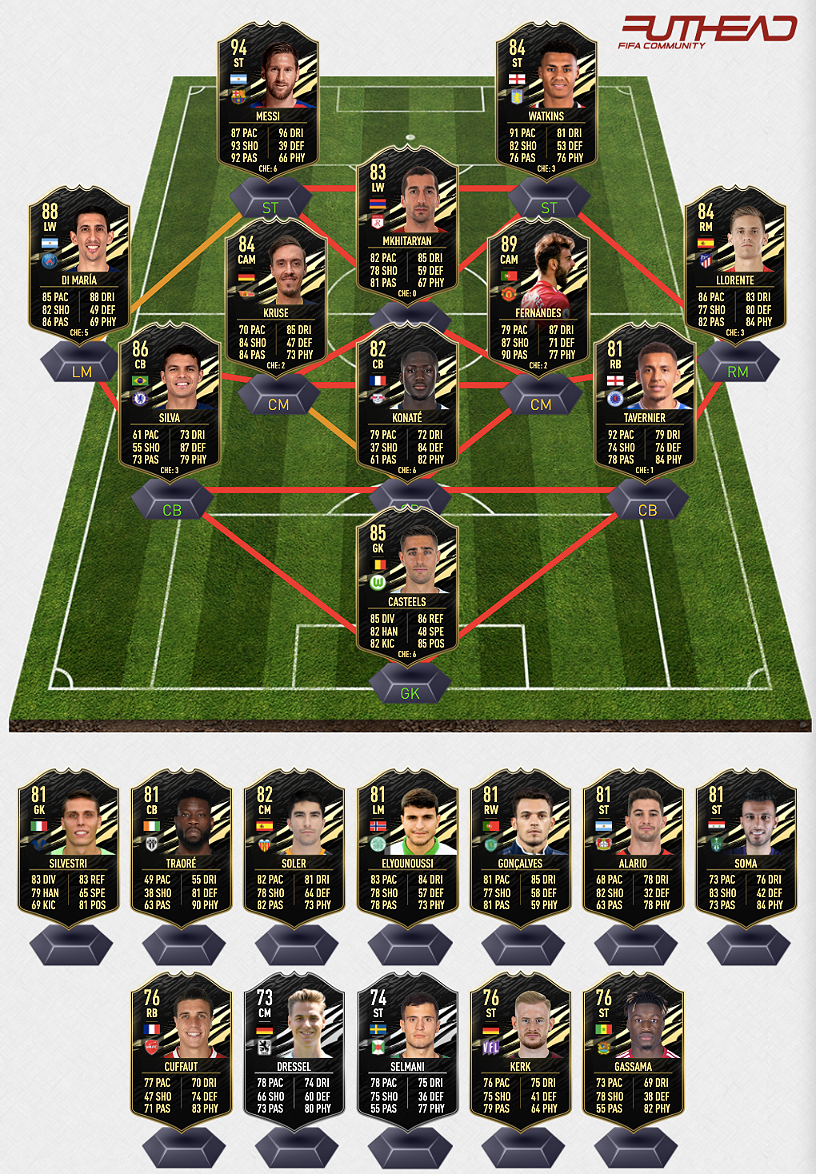 Casteels GK - VFL Wolfsburg - 83 -> 85 Rated: One of the easier picks this week is Wolfsburg Goalkeeper Casteels. Wolfsburg faced Hoffenheim at home on Sunday and Wolfsburg came away with a 2-1 win and extended their unbeaten run in the Bundesliga up to 5 games. Casteels made a total of 4 saves but most important was his saved Penalty in unjury time. His performance got awarded with a 1.5 and MOTM from Kicker and therefore i can't see him not getting the Inform.

Thiago Silva CB - FC Chelsea - 85 -> 86 Rated: A side where the Inform is hard to pick due to the fact that the official named MOTM Ziyech can't get it back to back is Chelsea. They came from behind to convincingly beat bottom club Sheffield United 4-1 to continue their promising run and it's no coincidence that Chelsea look more solid when Silva partners Zouma. Altough they endured a rough start as Sheffield took the lead, Silva was superb and even got on the scoresheet with a header 13 minutes from time to make it 3-1. As mentioned, Ziyech was the official MOTM but with Silva being awarded with a 8/10 i've opted with the brazil defender.

Ibrahima Konaté CB - RB Leipzig - 78 -> 82 Rated: RB Leipzig maintained their 100% home record in the Bundesliga this Season as they outclassed Freiburg 3-0 on Saturday. This game gives two oppoertunities for an Inform, one of them is the french CB Ibrahima Konaté who helped his side keep the clean sheet but even more important was his opening goal where he swept the ball home from close range. His performance got awarded with a 2, MOTM and a spot in Kicker's TOTW.

James Tavernier RB - Glasgow Rangers - 75 -> 81 Rated: After Tavernier got robbed of his first inform last weekend i'm happy to include him again and this time he definetly should get it. Glasgow Rangers won their home match against Hamilton Academical with an impressive 8-0 and Tavernier got himself two goal, one assist and also kept the clean sheet.

Max Kruse CAM - Union Berlin - 81 -> 84 Rated: Union Berlin recorded an impressive 5-0 win at home against Bielefeld extending their unbeaten run to now six games and Bundesliga veteran Max Kruse was the one shining. He scored one from the penalty spot and assisted two which got awarded with a 1 and POTW from Kicker. As a side note, Kruse's penalty conversion was his 16th consecutive successful spot-kick in the Bundesliga, drawing him level with record set by Abel with Schalke in the 1908s which means Max Kruse could be the first player who receives a Record Breaker Card in Fifa 21.

Bruno Fernandes CAM - Manchester United - 88 -> 89 Rated: The portuguese midfelder continues showing his good form and why Manchester United bought him. It looked like another bad day at the office for United when Everton opened the scoring but United rallied with Fernandes finding the net twice and providing the assist for Cavani's first United goal. Altough Harry Maguire got the MOTM award for his performance i can't ignore Bruno's two Goals and the assist and it looks like he'll get his SIF.

Marcos Llorente RM - A. Madrid - 82 -> 84 Rated: Atletico Madrid continued their rampant run of domestic form as they crushed visitors Cadiz 4-0 on Saturday. With J. Felix not being eliagble for an Inform due to his current first one i'm happy to inlcude Llorente who got himseld a goal and an assist to cap a week in which he was called up to the Spain squad for the first time. He seems to get better with every game and continues his fine form which got awarded with a 3/3 from Marca, the highest possible Rating.

Henrikh Mkhitaryan LW - Roma FC - 80 -> 83 Rated: A player who is easy to pick this week is the Armenian forward Mkhitaryan although i'm not sure if he was playing as a LW or a CAM. But apart from the position there's no way he won't make it with scoring 3 goals in Roma's 3-1 away win over Genoa and a match rating or 9 from Gazzetta.

Di Maria LW - Paris SG - 87 -> 88 Rated: PSG suffered more injury woes as the extended their advantage at the top of Ligue 1 to 5 points after a 3-0 win against visitors Stade Rennais. In the absence of PSG's superstars Neymar and Mbappé it was on Angel Di Maria running the show. The argentinian scored twice, added an assist to his scoresheet and his two goals now gives him current sole possession of 8th place in PSG's all-time goals list. A Man of the Match performance and a L'Equipe Rating of 8/10 should be enough for his first inform.

Ollie Watkins ST - Aston Villa - 81 -> 84 Rated: It's an up and down season for Aston Villa so far with crushing Liverpool 7-2 and then losing two in a row but it looks like they're back in form with beating Arsenal 3-0 away. It looks like Ollie Watkins is picking up his second inform with him scoring 2 of the 3 goals and even though he wasn't named MOTM he should get in due to the lack of good options for the Striker spot.

Lionel Messi ST - FC Barcelona - 93 -> 94 Rated: Messi might not be the most meta card this Fifa but it looks like his first inform could be on the way for him. He came off the bench to inspire Barcelona to a 5-2 win against 10-man Real Betis as his side ended a four-game winless run in La Liga. A de facto assist and two goals wasn't a bad return for his 45 minutes on the pitch which got awarded with a 3/3 match rating from Marca. This is a stretch because we have seen higher rated Players not being included before for the same what Messi did but i will take the risk with it.

Marco Silvestri GK - Verona - 77 -> 81 Rated: The second goalkeeper this week is coming from Serie A and it's the second time i'm including Verona's GK Silvestri. After being 2-0 up against AC Milan the game ended in a 2-2 draw where Silvestri made a total of 7 saves and was the main reason AC Milan just took one point instead of 3.

Ismaël Traoré CB - SCO Angers - 75 -> 81 Rated: Ligue 1 is always a league providing options for defenders and so it is this week. Angers ran away with a 5-1 win against Nimes and although they've conceded one, Traoré got himself two assists which i can see be enough for him to make it.

Carlos Soler CM - Valencia - 79 -> 82 Rated: This was probably the craziest game this weekend in terms of how the goals have been scored. Soler got himself a hattrick of penalties and if it wasn't against Real Madrid i probably would not inlcude him but as said, Valencia beat Real Madrid 4-1 and therefore i'm sure Carlos Soler will take the inform for his goals.

Elyounoussi LM - Celtic Glasgow - 76 -> 81 Rated: I'm not sure if we ever had a TOTW with a player from Celtic and Rangers at the same time but i can't miss out on including Elyounoussi who scored 3 goals in Celtic's 4-1 win against Motherwell. Usually it's hard for players outside of the top 5 leagues to get two informs from one league but this time i can totally see this happen.

Pedro Goncalves RW - Sporting CP - 76 -> 81 Rated: I think it's the third time now i'm predicting Goncalves to get his first inform and i really hope they will give it to him now. The 22-years old portuguese is probably the most In-Form player in Liga NOS at the moment, he again has scored two and assisted one in Sporting's 4-0 win against Guimares. If he won't get the inform again i don't know what else he needs to do.

Omar Al Soma ST - Al Ahli - 77 -> 81 Rated: Amother Fifa, another inform for Al Soma. His side won their match against Al Ain 4-3 and with Al Soma scoring 3 of the 4 goals his inform on Wednesday should be save.

Joffrey Cuffaut RB - Valenciennes - 68 -> 76 Rated: We usually see Forwards scoring 3+ goals when it comes to the players in reserves but this week it was a defender. It was a thrilling game between Valenciennes and Toulouse, ending in a 5-4 win for Valenciennes. Cuffaut was the one to write Headlines with scoring 4! goals from the RB Position which i haven't seen ever before and his last goal being a free-kick and the match winning goal.

Dennis Dressel CM - 1860 Munich - 63 -> 73 Rated: Another player who scored 4 goals this weekend was Munich's midfielder Dennis Dressel. His side hammered Hallerscher FC with 6-1 and Dressel was the one to shine. He also got awarded MOTM and also won POTW.

Astrit Selmani ST - Varbergs BolS - 64 -> 74 Rated: This inform could come from the swedish league with Selmani scoring 3 Goals in a 5-2 win for his side agains Hammarby IF to end their run of winless games in the league.

Sebastian Kerk ST - VFL Osnabrück - 67 -> 76 Rated: Another player who managed to get himself a hattrick was Sebastian Kerk. Osnabrück came away with a 4-2 win against Regensburg and remains in touch to the top of the table with Kerk being named MOTM and also got awarded with POTW from Kicker.

Sekou Gassama ST - Fuenlabrada - 68 -> 76 Rated: The last one is, who would have thought, a hattrick again. This time it was Fuenlabrada's Gassama who managed to score all three goals in their 3-0 win against Alcoron in La Liga 2.