FIFA 21 Team of the Week 6 Predictions

Published on by Simpleblue 68 Comments 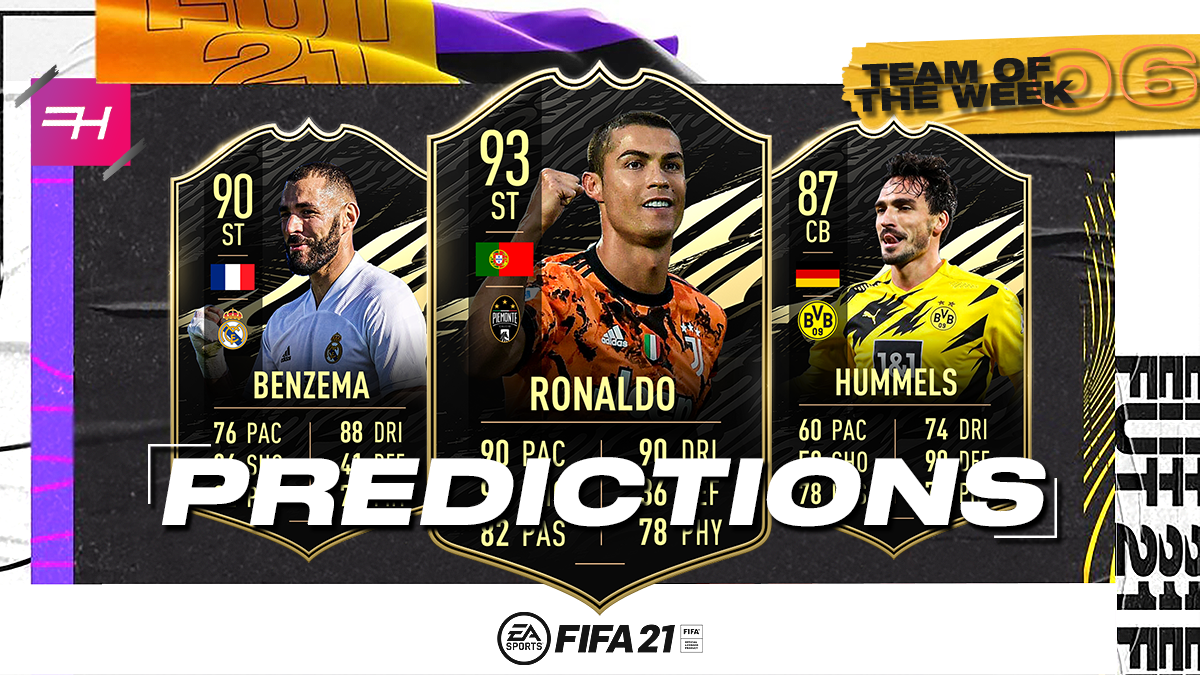 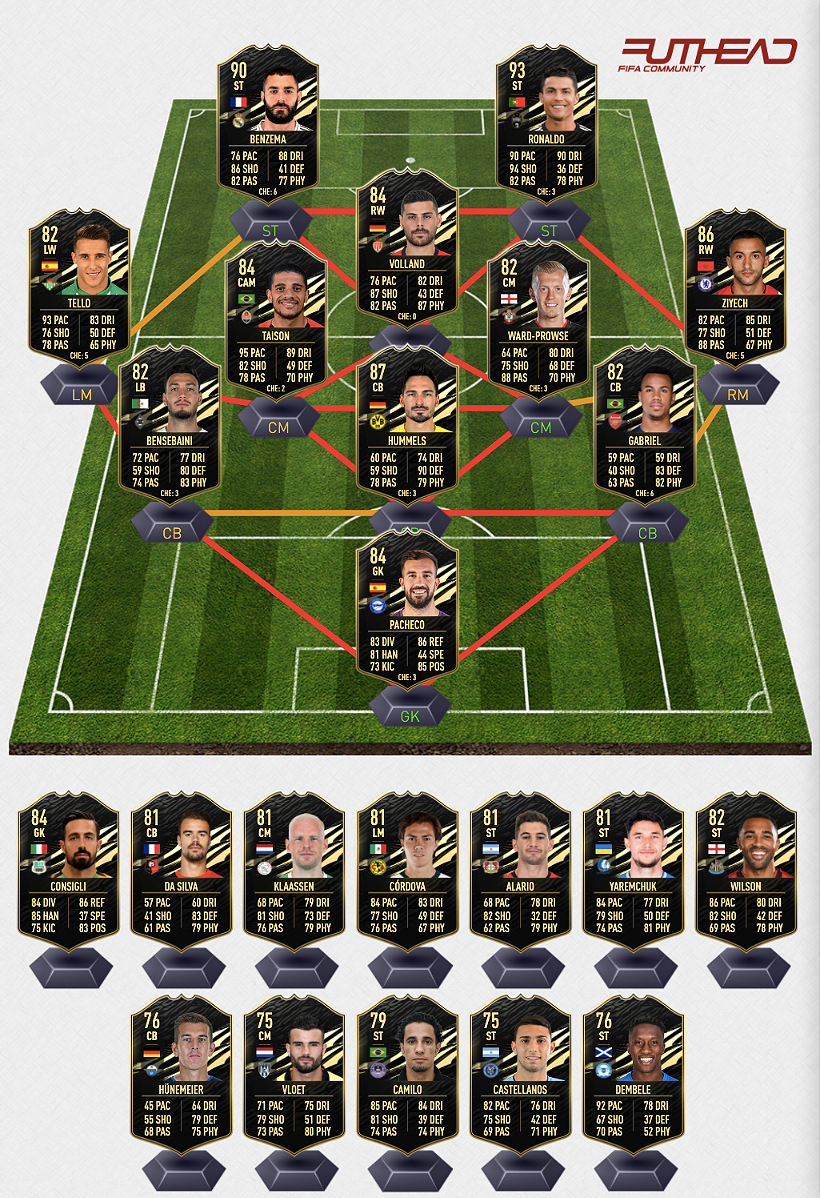 Pacheco GK - Alaves - 82 -> 84 Rated: It's a really tough season so far for Barcelona. Alaves was the team they've faced and a lot of people expected an easy win for the away team but Alaves was the team to score the opener in the first half. Alaves was down to 10 men in the second half then, Barcelona equalised with a goal from Griezmann and continued to lay siege to the Alaves goal but where repeatedly thwarted by former Real Madrid keeper Pacheco who denied Messi, Ansu Fati and Sergino Dest to help his side massievly to keep the draw. A total of 7 saves from Pacheco was awarded with 3/3 stars from Marca, the highest possible rating

Mats Hummels CB - Borussia Dortmund - 86 -> 87 Rated: Despite an almost embarrassing wealth of attacking talent on the field, Borussia Dortmund had to rely on a defender to see them break the defense of Bielefeld. The german defender scored twice in the second half to help Dortmund beat Bielefeld 2-0 and move level on points with leaders Bayern Munich ahead of their clash next week. Both goals, 15 tackles won and an impressive performance overall got rewarded with a 1.5, MOTM and POTW from Kicker.

Gabriel CB - FC Arsenal - 78 -> 82 Rated: Another top match in the Premier League and this time it was ManU who faced Arsenal London at home. Who thought ManU could continue their form they have shown in the UCL was wrong, it was Arsenal controlling the game and went away with a 1-0 win. One Player who was responsible for the clean sheet was the brazil defender Gabriel. Altough he was booked early he was always in the right place, repelled everything that was send his way and made a decisive tackle late on to deny Matic in the penalty area. He was a key component of the new built at Arsenal and awarded with a huge 9/10 and MOTM.

Ramy Bensebaini LB - Borussia Mönchengladbach - 79 -> 82 Rated: Usually i wouldn't inlcude a defender without a goal contribution but with the lack of good options this week and the game between Gladbach and Leipzig being the top match in Germany i can see him sneaking in. He helped his side to keep a clean sheet and got awarded with a 2.5 and a spot in Kicker's TOTW which could be enough.

Ward-Prowse CM - FC Southampton - 79 -> 82 Rated: This is probably one of the most deserved informs this week. The in Form Southampton had to play Aston Villa away and the pressure was on Aston Villa after their defeat the week before against the new promoted Leeds. It was an really entertaining game which went the better way for Southampton with them winning 4-3. James Ward-Prowse was the one to steal the show in the first half with an assist for the 1-0 and two stunning free-kick goals to make it 3-0 at halftime. Even though A. Villa managed to strike back Ward-Prowse was the undisputed MOTM, awarded with a 9/10.

Taison CAM - Shakhtar Donetsk - 81 -> 84 Rated: Another Fifa, another potential inform for the brazil left midfielder. Donezk faced Mariupol on Friday and the outcome of this match was as expected, Donezk won the game 4-1 and it could have been easily two digits. The one who had the most impact was Taison who managed to score tow goals, one of them from the penalty spot. But not just the goals are a reason he could get in, he also created numerous dangerous situations which sometimes were poorly converted by his teammates. However, his two goals should be enough for getting an inform and apart from his 3 star weakfoot it could be a decent one.

Christian Tello LW - Real Betis - 78 -> 82 Rated: There aren't a lot of Wingers this week so i'm happy i can include the spanish forward Christian Tello. Real Betis faced FC Elche on Saturday and the outcome was a 3-1 victory for Betis, Tello managed to get 2 Goals and an assist and got awarded with 3/3 stars from Marca which should be enough for him to get into TOTW this week.

Hakim Ziyech RW - FC Chelsea - 85 -> 86 Rated: The marrocan was named in the starting XI for the first time in the Premier League and impressed in front three against Burnley. Linked up well with his teammates and that was evident when he opened the scoring. He also got himself an assist in the second half and was excellent during his 73 minutes on the pitch which was awarded with a 7/10 from Sky.

Kevin Volland RW - AS Monaco - 81 -> 84 Rated: After Monaco's 1-4 defeat the week before against Lyon they had a bit of pressure to find back to their form and they did pretty well. They faced Bordeaux at home and ended it with a 4-0 win. There are two options for an inform from this game and my take is the german forward Kevin Volland who got himself two goals from the RW and got awarded with a 8/10 from L'Equipe and an inclusion in their TOTW. Ben Yedder got the same match rating but with the amount of Strikers this week i've decided to go with Volland.

Karim Benzema ST - Real Madrid - 89 -> 90 Rated: It was an encouraging week for Zidane's side with a Clascio win and late draw in the UCL against Gladbach and it continued against Huesca who are yet to win this Season. Huesca had been the better team until Hazard's strike turned the Contest. It was then on the French striker Karim Benzema who made it two, assisting Valverde's half-volley goal and rounding off the win in injury-time with a smart header to make it 4-1 which got awarded with 2/3 Stars from Marca.

Cristiano Ronaldo ST - Juventus - 92 -> 93 Rated: This is a very debatable pick because both, Ronaldo and Morata, got a 8 from Gazzetta but it feels there needs to be someone in TOTW to light it up. Juventus faced Spezia in Serie A this Weekend and after Ronaldo was out for 2 weeks due to his positive Corona test he got subbed on right after halftime and scored two goals. One of them was a penalty tho and as said, Morata got the same rating for 1 goal & 1 assist. It's a 50/50 pick but definetly one i'm willing to take the risk on.

Andrea Consigli GK - Sassuolo - 81 -> 84 Rated: The second goalkeeper this week is coming from Serie A where Sassuolo surprisingly came along with a 2-0 win against SSC Napoli. Consigli managed to make a total of 6 saves and helped his team to keep a clean sheet which should be enough to get him the inform.

Da Silva CB - Stade Rennais - 77 -> 81 Rated: Stade Rennais started the Season pretty good but then struggled a bit with a draw and a loss in the last two games so it was important for them to win to not lose track to the top of the table and they did when they faced Stade Brest. The outcome of the match was a 2-1 win after they have been down 0-1. Both goals for Rennais came from their CB's and i'm happy to inlcude Damien Da Silva who scored the equaliser and got awarded with a 7/10 and a spot in L'Equipes TOTW.

Davy Klaassen CM - Ajax Amsterdam - 77 -> 81 Rated: Ajax just set the record for the highest win in the Eredivisie last Weekend and faced Fortuna Sittard who were bottom of the table. They managed to win the game 5-2 but that was not wihtout a struggle at first. They fell behind early but put things in order before the break with Davy Klaassen who scored both goals to make it 2-1 before half-time. His first goal wasn't without a struggle when his penalty hit the post but he used the rebound. Overall he has shown a solid performance which got awarded with a x.x from the dutch paper.

Sebastian Cordova LM - Club America - 75 -> 81 Rated: This is the first of two informs which could come from Liga MX this week with Club America's LM Cordova scoring 2 goals and assisting another in America's 3-1 victory over Tigres.

Lucas Alario ST - Bayer Leverkusen - 77 -> 81 Rated: The spot for strikers on the Subs were a bit hard to fill this week because there have been quite a few scoring 2 goals but Bayer Leverkusen's Lucas Alario deserves it this week. Leverkusen faced Freiburg on Sunday and they ran away with a 4-2 win. The argentinian forward got himself 2 goals and was awarded with a solid 2 and a spot in Kicker's TOTW which could be enough for him to finally get the inform.

Callum Wilson ST - Newcastle United - 78 -> 82 Rated: Newcastle against FC Everton was the matchup on Sunday and the chance for Everton to move level on Points with Liverpool. It was a really dull first half from both teams but it turned around the second half. Newcastle took the early lead in the second half with a penalty goal from €20m man Callum Wilson and it started to heaten up. It was on Wilson again to make it 2-0 7 minutes before the final whistle and even though Everton scored their first goal in injury-time it wasn't enough. Callum Wilsonw as the star man for Newcastle and therefore got awarded with a 8/10 and MOTM.

Roman Yaremchuk ST - KAA Gent - 75 -> 81 Rated: This inform comes from the first of a few Hattricks this week and it's coming from the Belgium League. KAA Gent faced Waasland-Beveren away and after 4 losses in a row they finally managed to get back on track and ran away with a 4-1 win. Man of the Match was the Ukraine forward Roman Yaremchuk who managed to score a hattrick in 16 minutes to make it 4-0 at halftime.

Uwe Hünemeier CB - SC Paderborn - 68 -> 76 Rated: Another German defender this week who could make it into TOTW with two goals is Paderborn's Uwe Hünemeier. His side faced Regensburg in Bundesliga 2 and went away with a 3-1 win and as said before, Hünemeier scored two of the three goals and got awarded with a 1.5 and MOTM from Kicker.

Rai Vloet CM - Heracles Almelo - 65 -> 75 Rated: When it comes to hattricks it's usually up to the attackers to be on the scoresheet but this time it's the dutch Midfielder Vloet from Heracles to bag a hattrick and also having an assist in Heracles' 4-1 win against Utrecht which is rewarded with a 8.5 from dutch papers.

Camilo ST - Mazatlan FC - 72 -> 79 Rated: This inform could come from Liga MX again with Camilo scoring 3 Goals and also adding an assist to his game with his side beating Atlético de San Luis with 5-0.

Siriki Dembélé ST - Peterborough - 67 -> 76 Rated: This Inform comes from another Hatt-rick. The first placed Peterborough faced Shrewsbury and it went as expected, Peterborough came away with a 5-1 win. The scottish Striker Dembélé bagged a hattrick and was crucial for his side in the early promotion race where Peterborough is leading the table just because of the goal difference.